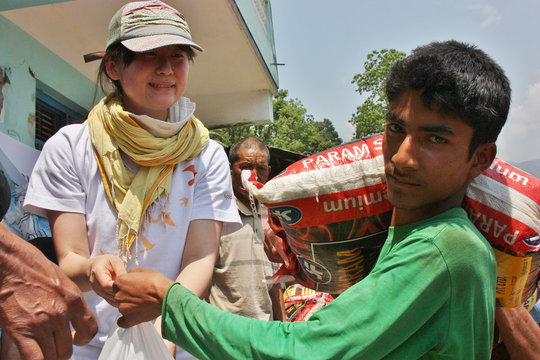 In order to efficiently deliver the ration packs, we collaborated beyond sectoral borders with the government, businesses and NGOs and cooperated with local volunteers as well as a Japanese company manufacturing goods in Nepal.

In Khubinde village located within Sindapalchowk district, it is believed that approximately 95% of the houses have been partially or completely destroyed. Following the distribution of 200 ration packs last May 2nd, the joint team loaded 9 vehicles with relief goods, and provided packs each containing 25 kilos of rice, 1 liter of cooking oil, 4 kilos of lentils, and 1 kilo of salt to 500 affected households.

Chihiro Taguchi, Manager for Nepal of Motherhouse, Ltd. (CEO Eriko Yamaguchi), which provided space for the repacking or relief goods, as well as prominent Nepalese social activist Susmita Maskey also supported our team in today’s distribution. Ms. Taniguchi says “It is the first time for me to collaborate with an NGO and participate in the distribution of relief goods. I was impressed at the fact that the goods were delivered to the affected through a number of steps.”

Through the support of many, we were able to provide relief to those in the remote areas. However, because of the severity of the damage last month’s earthquake has caused, there is still a huge number of people who require aid. One of the local resident who lost her daughter in law in the earthquake expressed sadly “My daughter in law was trapped under the rubble. My two grandchildren left are still young and they won’t understand that their mother has died. We have lost everything.” 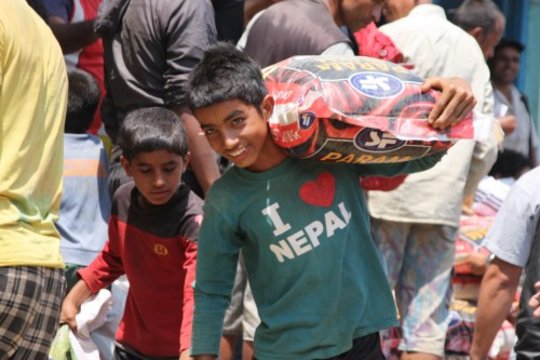 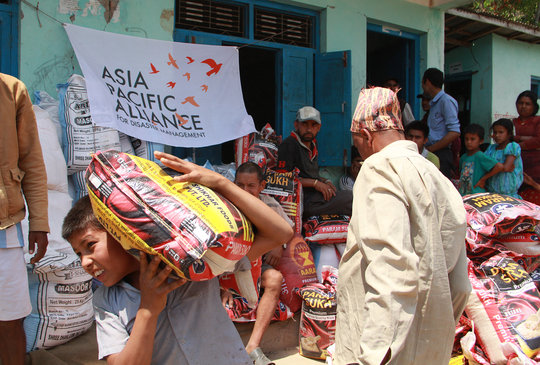 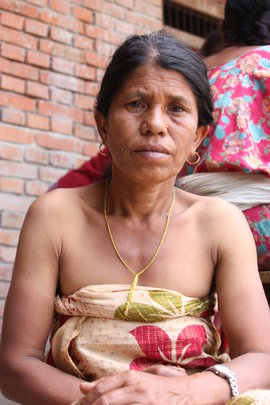 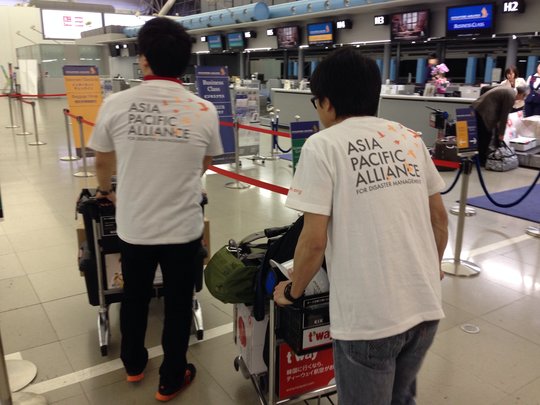 An extremely strong earthquake measuring 7.8 magnitude struck Nepal on April 25 at approximately 11:56 local time. Buildings and infrastructure have received severe damage and as of April 27, the number of dead has risen to more than 3,200 with an additional 5,000 more injured.

As Asia Pacific Alliance for Disaster Management (A-PAD)'s secretariat, Civic Force is taking the lead in fundraising and assisting the logistics of the operations from Japan. A-PAD and its sister organization Peace Winds Japan deployed an initial 12-member emergency response team with 2 search dogs on April 26th, Sunday. In Nepal, the team will formulate an appropriate response system from emergency to reconstruction in collaboration with its cooperating partner on the ground the National Society for Earthquake Technology-Nepal (NSET).

Each national platform has started to respond. Bangladesh National Platform representative Dhaka Community Hospital Trust (DCH Trust) will be sending a medical team for emergency treatment as soon as the Kathmandu airport reopens. They will also start a field hospital and conduct rapid medical need assessment. The medical team will consist of a trauma surgeon, nurse, and paramedics, and they will be accompanied by DCH Trust staff knowledgeable in DRR.

Indonesia National Platform for Disaster Risk Reduction-PLANAS will also be deploying a number of its members from HFI, Dompet Dhuafa, PKPU, San Rumah Zakat and will be accompanied by BNPB (Indonesian National Agency for Disaster Management) on April 28th, Tuesday. 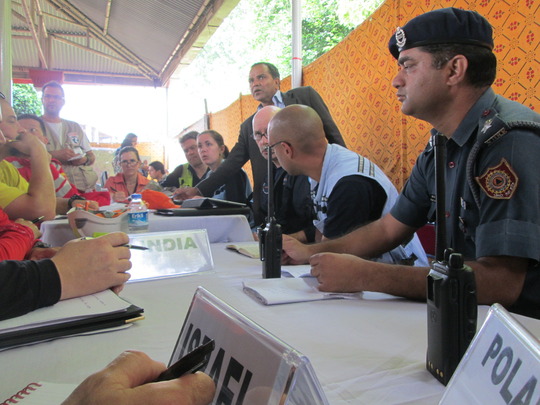 As Asia Pacific Alliance for Disaster Management (A-PAD)'s secretariat, Civic Force is supporting its mission on the ground. A-PAD and Peace Winds Japan’s (PWJ) joint emergency mission arrived on separate flights in Kathmandu on April 27 and 28.

Since then, the team has been coordinating with local partner National Society for Earthquake Technology-Nepal (NSET) and other entities on the ground to collect information and plan appropriate emergency response activities.

PWJ’s SAR team and dogs visited the Dutch rescue team’s base camp to discuss the locations that are in most need of search and rescue before setting off for the affected areas. They immediately set off for for the collapsed rubble of a guesthouse in Kathmandu where 10 people are believed to be trapped inside. The two search dogs, Halc and Yumenosuke, began to look around for any signs of life but unfortunately could not find any. They will continue their SAR mission on April 29 at Sindupalchowk where more than 1,400 people are now known to have died.

Meanwhile, A-PAD’s assessment team will continue to gather information and coordinate with local organizations. They plan to set out for the town of Sankh, where reports have indicated received severe damage from the earthquake, and conduct an assessment of the humanitarian situation upon reaching the area.

In Kathmandu, our team observes that the survivors are making do with little supplies camped out in tents or under plastic sheets outside in the rain. 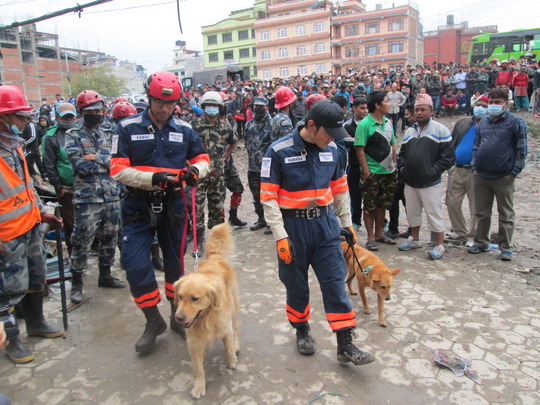 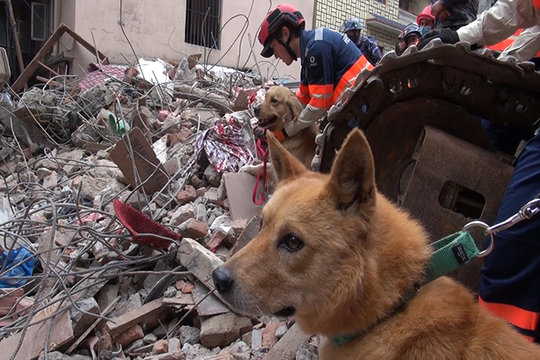 Yumenosuke searching through the rubble 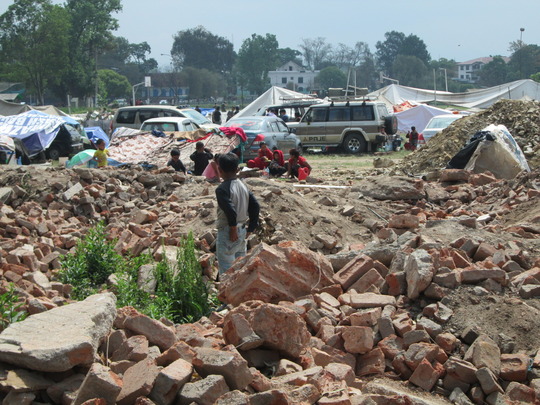 ‹ 1 ... 5 6 7 8 9 10 11 12 ... 22 ›
WARNING: Javascript is currently disabled or is not available in your browser. GlobalGiving makes extensive use of Javascript and will not function properly with Javascript disabled. Please enable Javascript and refresh this page.