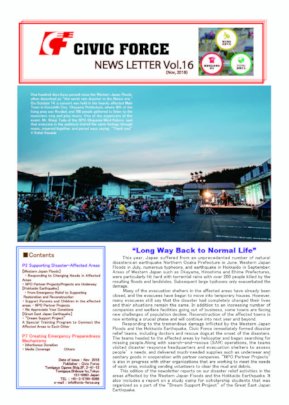 This year, Japan suffered from an unprecedented number of natural disasters:an earthquake Northern Osaka Prefecture in June, Western Japan Floods in July, numerous typhoons, and earthquake in Hokkaido in September: Areas of Western Japan such as Okayama, Hiroshima and Ehime Prefectures, were particularly hit hard with torrential rains with over 200 people killed by the resulting floods and landslides. Subsequent large typhoons only exacerbated the damage.

Many of the evacuation shelters in the affected areas have already been closed, and the evacuees have begun to move into temporary houses. However, many evacuees still say that the disaster had completely changed their lives and their situations remain the same. In addition to an increasing number of companies and welfare facilities going out of business, some towns are facing new challenges of population decline. Reconstruction of the affected towns is now entering a crucial phase and will continue into next year and beyond.

This edition of the newsletter reports on our disaster relief activities in the areas affected by the Western Japan Floods and the Hokkaido Earthquake. It also includes a report on a study camp for scholarship students that was organized as a part of the “Dream Support Project” of the Great East Japan Earthquake. 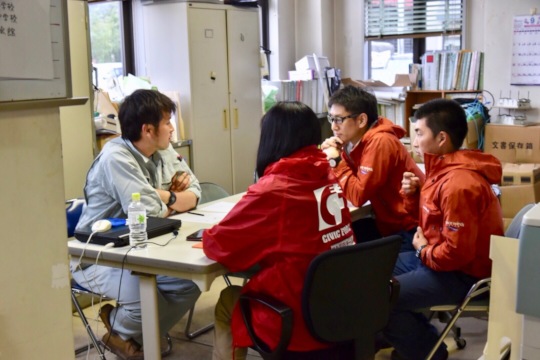 We would like to express our sincere appreciation for your understanding and support to
the aid activities of Civic Force for the areas hit by the Hokkaido Eastern Iburi
Earthquake.

Civic Force set up the emergency rescue team with the partner organizations on the date
of the outbreak, and rushed to the disaster hit areas by private jet and helicopter for the
search and rescue and the medical assistance.

Our activity also includes the distribution of the emergency relief goods such as water
supply bags, large wet towels and underwear, and the supply of the materials to improve
the environment in evacuation shelters, namely card board partition system. In addition,
we lent camping trailers to the local government staff as their resting place.

We are currently making a research in the disaster affected areas to prepare for
supporting the reconstruction and rehabilitation activities which will be implemented by
our local partner organizations.

We have been greatly encouraged by your warm sympathy with our activities. Let us
express our deepest gratitude. We very much look forward to your continuous
understanding and cooperation to the Civic Force’s activities. 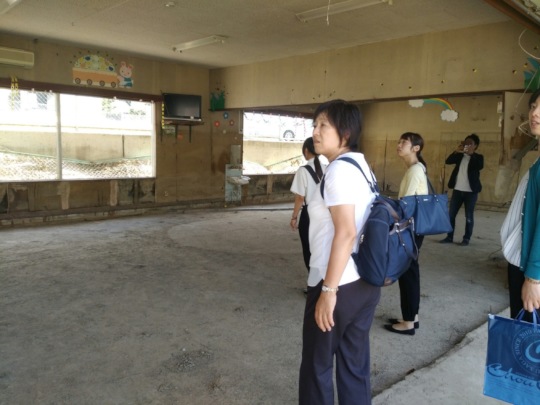 With your help, Civic Force has been supporting the victims of the West Japan floods since the disaster struck in early July. One area of need we identified was helping children return their lives to a semblance of normalcy. Tenno Megumi, a kindergarten located in Kure, Hiroshima Prefecture, needed our help to re-open its doors for young students to return. On August 8, we delivered 183 books to the kindergarten that Oheso, a nursery school in Saga, had collected.

"We wanted to do something for the schools and children's playrooms that were heavily damaged by the floods in July," said the principal of Oheso. In collaboration with other teachers and Civic Force, Oheso was able to collect an additional 322 books that were delivered later on August 30.

Civic Force also installed air conditioners at Tenno Megumi. This summer was particularly hot in Japan with an unprecedented heatwave killing at least 65. The school needed air conditioners to give the students a safe space throughout the day. During disaster recovery, returning children to their normal lives is critical to their mental health and helps their families rebuild their lives.

Since July, Civic Force has been working through our NGO partnership network to respond efficiently to the varied needs of disaster victims around the Okayama, Hiroshima, and Ehime Prefectures. This allowed for the quick allocation of resources, both human and financial, to reach those in need. One such partnership, the Disaster Area NGO Partnership Center, helped provide shuttle buses for volunteers from four different sites reach disaster-affected areas.

Another partnership was with the Hikuchi Volunteer Center in Ehime. We helped to continuously update needs assessments, organize and coordinate volunteer dispatch, and provide construction tools to volunteers and victims.

It has been a busy summer for Japan. Disaster after disaster struck, sometimes one right after the other, leaving emergency responders scrambling. Civic Force would like to thank all those who donated to relief efforts in Japan and for keeping us in your thoughts. Please continue to support us and the many volunteers invested in West Japan. 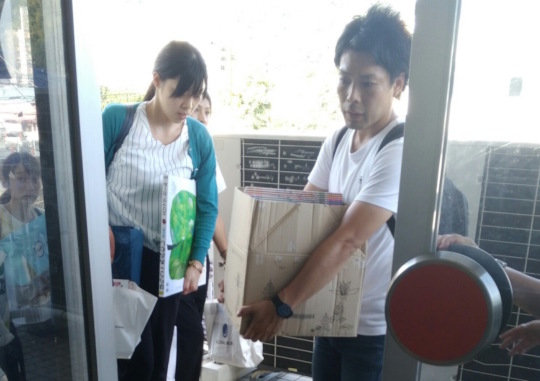 Installing air conditioners at Tenno Megumi
‹ 1 ... 3 4 5 6 7 8 9 10 ... 22 ›
WARNING: Javascript is currently disabled or is not available in your browser. GlobalGiving makes extensive use of Javascript and will not function properly with Javascript disabled. Please enable Javascript and refresh this page.