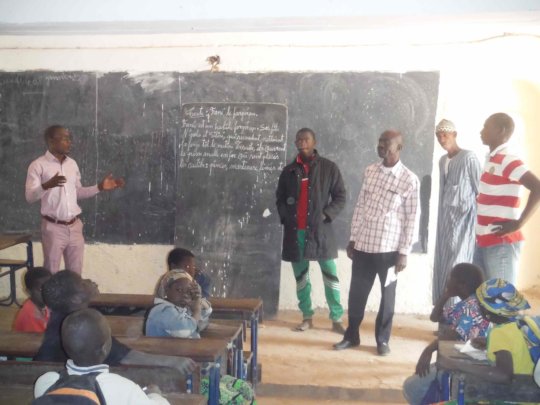 AVN and Kounda 78 in a NV classroom

A potential partnership in the region of Kayes

At the beginning of January Alexe Dembélé, AVN-Mali’s National Coordinator invited Amadou Tall, local representative of the Kounda 78 Association and Mr. Barry, President of the Lontou Education Council, to a preliminary meeting to discuss an eventual partnership for the construction of school buildings in the Circle of Kayes.

The meeting started with visits to two NV schools in the villages of Koba and Fanssira (Commune of Yékéboubou – Cercle of Kati) and continued to N’Golofala with visits to NV houses and dispensary. This field trip also provided an opportunity to ask NV artisans and masons about such issues as techniques for protecting external walls of NV buildings, the quality of earth to be used, protection against termites etc. The answers to such questions convinced the two visitors of the viability of the NV concept.

There are many advantages of the NV concept for schools. The thermal comfort of a NV building helps the pupils to study more effectively, an essential point made in directives from the Malian Ministry of Education and confirmed by M. Barry: «In Lontou, from March onwards classes are cancelled every afternoon because of the excessive heat. If the schools were built in the NV style classes could be held all day, allowing the teachers to complete the year’s school programme ».

This first phase of the project was a success, and Mr.Tall and Mr.Barry have welcomed it with open arms and hope to get strongly involved in its diffusion in the Commune of Hawa Dembaya. As a result of the agreements which will shortly be made between AVN and Kounda 78, the implementation of the NV programme in the Kayes Cercle could develop over several years.

AVN is already present in the Kayes region through its role in the project on management of natural resources in the context of climate change (Gestion des Ressources Naturelles dans un Contexte de Changement Climatique - PGRNCC) , financed by the AEDD, which promotes the NV concept (awareness raising, training, duplication) in 14 Communes, and more recently in a project to train three conventional masons from the Cercle of Yélimané. 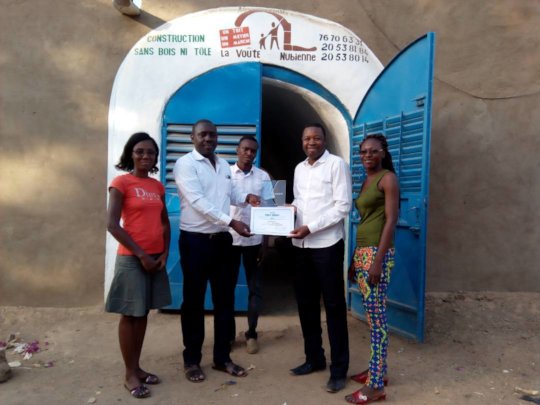 The Coordinator of the event, M. Check Omar Yéyé, visited the national AVN team in Boromo to give the prize in person to Boubacar Ouily, AVN-Burkina Faso's National Coordinator.

He congratulated all the team for the quality of their work and for the deployment of the NV concept in both rural and urban areas of Burkina. He stressed the fact that the Jury had voted unanimously for the NV concept in respect of its fulfilment of the Eco-Habitat prize criteria (bio-climatic qualities, local materials, respect for the environment, 'green' jobs).

This prize complements the many distinctions which recognise the contributions made by AVN's programme in the environmental and sustainable development fields. The many low-carbon features of the NV ensure that it is an ecologically responsible construction technique, recognised by the Government of Burkina Faso as contributing to its commitments in favour of green developmental solutions*

* In 2015, during COP21 in Paris, Burkina Faso had explicitly mentioned the NV concept as part of its Intended Nationally Determined Contributions (INDC).

Construction of the Matam Town Hall in NV has started!

The construction site of the Matam Town Hall using the NV technique was officially opened last week. The building will have a total surface area of 561 m2 and will be realised in two stages, the first, comprising 367 m2 to be completed this season. It is the first of several NV buildings in the NV Fouta Project.

After the completion of the architectural studies by Al Mizan leading to the public tender document, the market was won by the firms Habitat Moderne*/Rich Man. This is the first NV contract to have been processed through the Senegalese public procurement procedure - a clear sign of the formal institutional recognition of the NV technique.

The construction site was formally opened last Tuesday by the President of the Matam Département Amadou Djibril Diallo and his team, in the presence of the Rich Man firm and several technical actors. The President thanked everyone and stressed the significance of the adoption of the NV technique as an example for other construction projects in the Region.

The fabrication of bricks has already started on the site, pending the laying out of the entire site and the start of construction. 16 Senegalese masons (including 5 new ones) and 8 NV masons from neighbouring countries will be working on this ambitious project.

* In 2016 Habitat Moderne built the Maison des Yvelines, an NV building of 370

The SE4ALL Initiative: a theatre forum to raise awareness about sustainable energy in Burkina Faso

As part of the UN initiative « Sustainable Energy for All» (SE4ALL) *, AVN and the Organisation Catholique pour le Développement et la Solidarité – OCADES - Caritas of Dédougou organised atheatre-forum** at the end of January in Ouroubonon, to raise awareness about how households can improve access to good quality renewable energy;this was organised in collaboration with the Netherlands Development Organisation (SNV) in Burkina and the Mayor of Boromo. Sixty people took part, including institutional actors from surrounding communes (Boromo, Petit Balé, Lapara, Wahabou), including Fatoumata Sankima, representing the Departmental Service of the environment, the green economy and climate change in Boromo.

The principal of the theatre-forum was well appreciated: each participant was able to contribute to the topic and offer suggestions for good practice. A group of actors enlivened the the meeting very successfully, and AVN and OCADES were able to respond to specific questions as needed. As a result of this success, the AVN Burkina Faso team suggested that similar meetings should be organised to make the relevant information accessible for as many people as possible.

During the discussions on housing and energy, the NV concept was addressed as an architectural solution for construction of low-carbon energy efficient buildings. As a result, many of the participants learnt about the AVN Programme and asked for it to be promoted in their locality.

* Launched by the UN Secretary General in September 2011, the SE4ALL Initiative aims, by 2030, to provide energy for everyone, to double both energy efficiency and the share of renewable energy resources in the global energy mix (source: Wikipedia).

** A theatre-forum involves participatory improvisation aimed at raising community awareness of the social and economic issues around a specific theme. 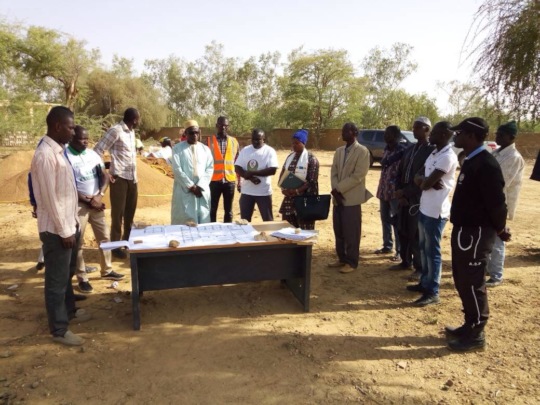 Construction of the Matam TownHall in NV has start 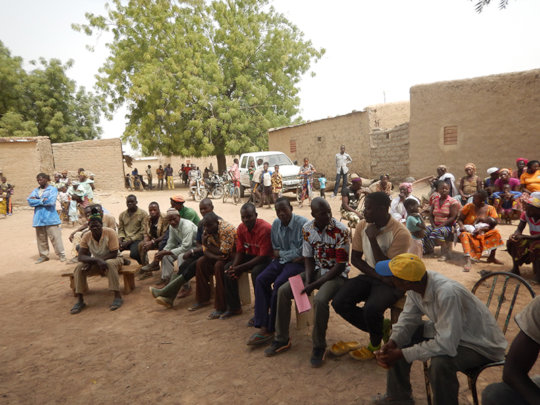 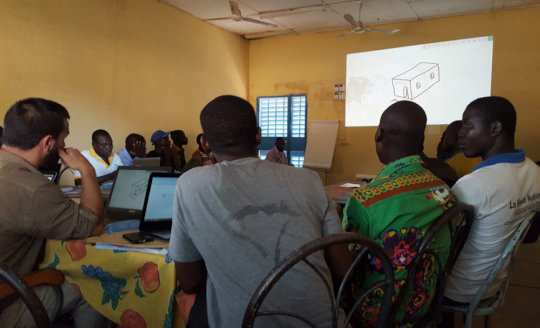 At the start of this season, AVN has started the first collaborative workshops to develop training tools and materials as part of the reinforced training activities in place since 2016. This brought together the various actors involved in training, including over 60 actual and potential trainer masons*, 15 regional and 8 national AVN staff, and the international coordinators from the Training Centre.

Organised locally with 6 one-week sessions in 3 countries, these workshops aimed to:

A lot of time was spent on the devel opment of the Apprentice Record booklet, the main working tool of the trainer mason. To this end, the Training Centre tested an innovatory method which involved projecting (on a wall) in real time pictograms for each technical post, prepared on a graphics tablet. The objective was to help the illiterate trainer masons (more than half of them) to make entries in the booklet. Following on, the good-humoured participants took part in role-playing exercises based on these pictograms.

In a second phase - 6 weeks later - the international coordinators from the Trainng Centre met with the regional and national staff to confirm their respective roles and to develop together the monitoring tools and procedures for the 2017-2018 season’s training programme.

Further training sessions are planned at the start of 2018 for the trainer masons, and for the regional and partner teams (like those for the PISCCA project in Burkina Faso and the Fouta teams in Senegal) with the overall aim of intensifying training actions for all NV apprentices and masons.

* selected from the pool of artisan masons for their pedagogical skills and their personal career ambitions.

A NV health centre for the Mopti region

The first community construction site of the 2017-18 season in Mali, initiated by the French Bilou-Toguna Association for the Malian NGO Delta-Survie of Mopti, was completed at the end of December.  This 37 m2 health centre was built in a few weeks by a young Malian artisan mason, Abdoulaye Fané, and his team. This is one of the few NV buildings in the Mopti region, after those completed near Badiangara.

The Mopti region is well known for its validation of earth architecture, so the development of an AVN programme here should be both relevant and welcome. Other building techniques using local raw materials have already been tested by NGO’s and local actors in the construction sector, but it would appear that the NV technique is the one most suited to local construction challenges, providing greater comfort at a lower cost, the creation of local jobs, respect of the environment, and adaptation to and attenuation of the effects of climate change. 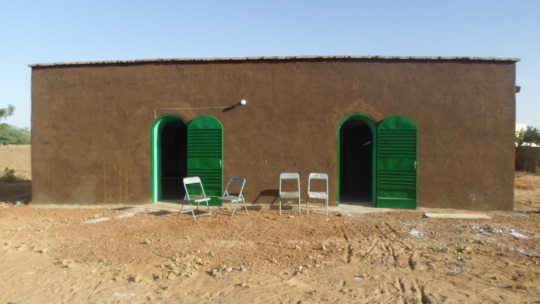 Health Centre in Mopti.
‹ 1 2 3 4 5 6 7 8 9 ... 28 ›
WARNING: Javascript is currently disabled or is not available in your browser. GlobalGiving makes extensive use of Javascript and will not function properly with Javascript disabled. Please enable Javascript and refresh this page.