The Nubian Vault latest news #May 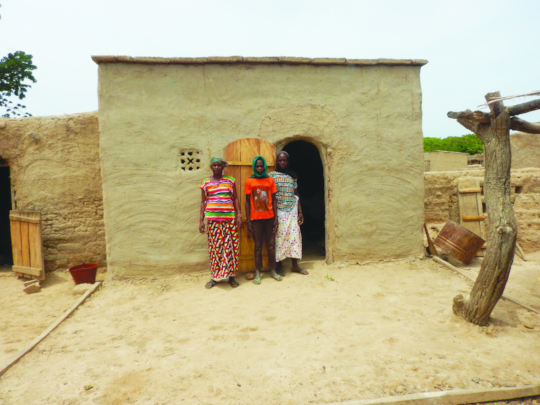 This season, the first activities aimed at shaping advocacy that focuses on "the right to decent and resilient housing for as many as possible in the Sahel" were carried out. These were led by civil society organization leaders (in particular of women's associations and famers' groups).

Living conditions of Sahelian populations, the state of the current building stock, demographic realities and rapid climate change fully justify the emergence of this right to adapted housing in Sahelian Africa, which as of today is not specifically referred to on any agenda, even though it determines how millions of families live and even though it falls under several SDGs (1-4-8-9-10-11-12-15). While AVN employees were until now the main people carrying out advocacy on behalf of the organization, especially in the North, it is now essential that those efforts be taken up and expressed by those who are primarily concerned by the issue and who are convinced of the legitimacy of this right.

This approach was launched with the mobilization of women leaders in each of the countries of intervention; they represent several hundred and some, even thousands of women farmers (COFERSA, CAFO, etc.). Next season workshops will be held that bring together these leaders to:

"Our cooperation with AVN as an Operational Partner began in November 2019. As an umbrella organization for cashew nut producers in Ouaké commune, we've mobilized cooperatives in the commune's six arrondissements, two of which are currently active in the programme financed by the European Union. Support from AVN has allowed us to be better organized and to expand our areas of intervention to the population in general and to cashew producers in particular.

Spreading AVN's programme has helped us grasp the true meaning of inclusive development. Through this programme, young farmers (who are often not really taken into account in projects and programmes) are now finding employment opportunities (NV masons) that do not require an academic degree. This employment also helps preserve the environment and strengthen the rural economy.

In addition, the training and support provided by AVN is allowing us to become more and more autonomous in terms of mobilizing and monitoring the training of local masons, as well as handing out financial incentives to potential clients. These solutions work on behalf of vulnerable people. AVN's programme gives us the opportunity to contribute to the development of our society, and we hope to find the necessary financing to expand these activities to the other four arrondissements in Ouaké." 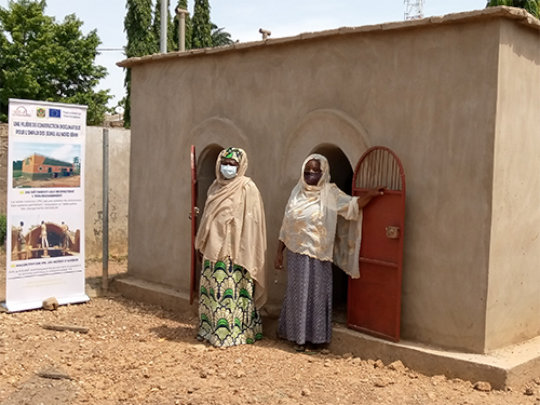 Beneficiaries of the UE project in Benin

EU Project in Benin: results and perspectives from the first year

Since December 2019, AVN and its Operational Partners - l’Union des Associations Villageoises de Gestion des Réserves de Faune (AVIGREF) and the Union Communale des Coopératives de Producteurs d’Anacarde (UCCPA) - have received financial support from the European Union for implementation of a project promoting a bioclimatic construction sector and youth employment in the north of Benin, involving eight Implementation Units in the Departments of Atacora and Donga.

Two ceremonies have been organised in the communes of Ouaké (department of Donga) and Tanguiéta (department of Atacora) for the official launch of the project, bringing together local authorities and development agencies (read the news).

The second year of the project (the 2020/2021 season) started last September wit the organisation of training academies for focal and subsidiary points, and awareness raising to mobilise local masons to join and continue with NV training activities. During this second year of implementation, we plan for:

In addition, a competition for the « most beautiful NV » will be organised to recompense clients who have kept their buildings in excellent condition, and to encourage others to follow their example.

—  *RB-FC : The training modules "Reinforcement on Building site – First Clients" help masons who want to become artisans to take responsibility for their first construction sites whilst being accompanied by a Trainer Mason, allowing for combined training on technical issues, working with clients, and team management. *CIC : these printed and numbered coupons are given to masons by AVN or its Operational Partners. Each incentive coupon corresponds to a maximum of 15 % of the total cost of the building, but nevertheless represents an important proportion of the cash needed to pay the specialist labour costs.

Since September 2019, AVN has been running the Burkina Faso / Mali project "Émancipation of cross-frontier communities at risk of destabilisation", financed by the PATRIP Foundation and coordinated by the NGO Welt Hunger Hilfe (WHH). The project aims to help stabilise the cross-frontier region between Mali and Burkina Faso by contributing to the well-being of the local population through creation of youth employment opportunities and the rapid construction of community infrastructure. Specifically, the project involves, over two years, the construction 60 NV buildings and the training of 120 young Maliens and Burkinabes as NV masons in 10 frontier communes.

At the half-way point, a workshop presided over by Sahabani Zeba, High Commissioner of Banwa Province brought together the project partners, local politicians and beneficiaries from the 10 communes, was held on October 27th last in Dédougou.

AVN was able to present encouraging results from this first season, despite some construction delays caused by the rainy season and various security and health issues:

Participants in the meeting welcomed these results enthusiastically and praised the many impacts of the project – social cohesion, economic development, improved access to basic services etc. - reinforcing the capacity of of these frontier populations faced with a disturbing security situation. A strong appeal for continuation of the project beyond 2021 was made by all present. 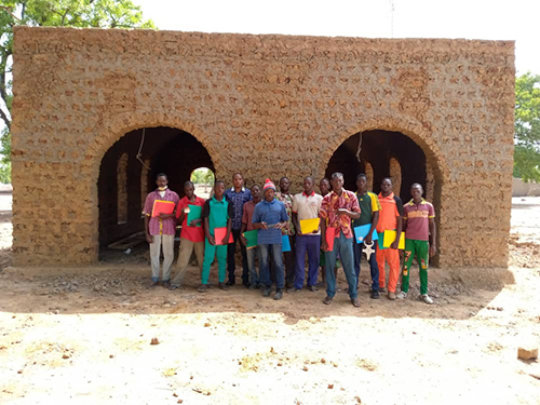 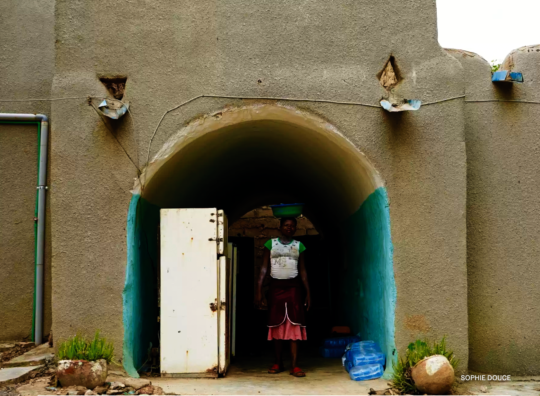 The jury of the prize for urban innovation awarded by the prestigious French newspaper Le Monde is made up of experts from round the world (politicians, researchers, corporate and foundation directors, architects, and urbanists). In this the fifth year of operation of the Prize, the jury has awarded the Grand Prix to AVN for its programme of adapted housing and construction in West Africa.

61 projects were in competition for the Prize, in 5 categories : Habitat, Mobility, Energy, Urbanism, and Citizen Participation. AVN’s project was specifically noted for its innovatory approach, its international coverage, and its potential for scaling up.

Through this latest sign of international recognition, AVN hopes that the essential importance of adapted housing and construction will receive more emphasis and attention. This key issue and its associated impacts on professional training, employment, attenuation of and adaptation to climate change, environmental protection, and strengthening of local economies should no longer be neglected.

A bioclimatic construction sector for the youth of northern Benin

Ceremonies to launch the project for a bioclimatic construction sector to provide jobs for the youth of northern Benin were launched on June 18-23 this year.

The first ceremony was held at the Mairie of Ouaké, in the presence of the Mayor, M. Dramane Ouolou, representatives of the Coopératives Villageoises de Producteurs d’Anacarde (CVPA), operational partners of the project from Ouaké and Sèmèrè I, members of the Union Communale des Coopératives de Producteurs d’Anacarde (UCCPA) of Ouaké, of AVN’s national office in Benin and of civil society organisations from Ouaké.

The second ceremony was held in Tanguiéta in the presence of the Mayor, M. Zakari Boukary, and various partners.

Co-financed by the European Union for a period of 3 years, this project supports the implementation of a programme of bioclimatic housing organised by AVN and its parters in Benin, involving professional training, job creation, climate mitigation and adaptation, environmental protection and the strengthening of local economies.

This project will train young apprentices during the dry season to become Nubian Vault masons, thanks to a dual programme open to all without any academic prerequisites, combining on-site experience with support to become entrepreneurs and join the local and regional construction sector. The NV technique relies heavily on local labour and low-carbon construction materials, and is implemented in collaboration with local partners, thus guaranteeing long-term growth in the number of active masons able to earn additional revenue between the two active agricultural seasons.

This event was also an opportunity to present the scope of the project and the results of its first year of operation. 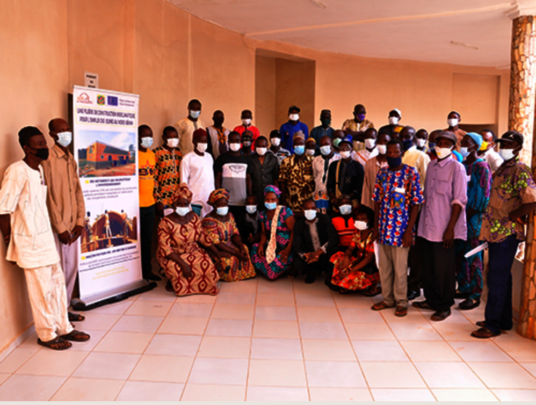 1 2 3 4 5 6 7 8 9 ... 28 ›
WARNING: Javascript is currently disabled or is not available in your browser. GlobalGiving makes extensive use of Javascript and will not function properly with Javascript disabled. Please enable Javascript and refresh this page.