Every Borrower Is A Lerner And Indeed An Earner! 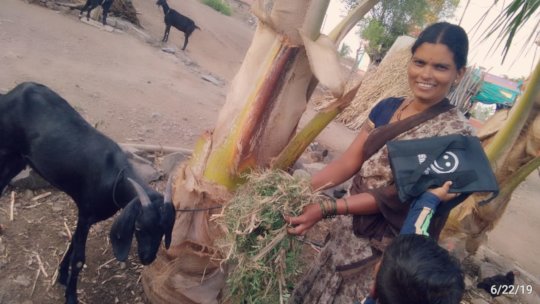 Balutai had a large family to take care of, with five daughters. She, along with her daughters, used to work in other’s fields; earning about 7,000 rupees a month, which was barely enough to meet expenses. Balutai’s husband is an alcoholic and did not support them financially. One day, while working in the fields, her friends told her about the goat farming course offered by Mann Deshi, and convinced her that it could be a lucrative side business. She decided to enrol for the course. Balutai says that she gained a lot of confidence after she attended the workshop. There, she saw women like herself conducting the workshop and narrating their stories. Inspired, she decided to start a goat rearing business. However, she realised did not have the capital to buy goats. She then took a loan from a Self Help Group (SHG or Bachat Gat) of INR 20,000, with which she purchased two goats. Using the knowledge she learnt from the course, she decided to conduct AI for her two goats. Both goats became pregnant and delivered two kids each. Now, Balutai has 5 to 6 goats. She proudly relates that she doesn’t even have to go to the animal market anymore, as people come to her house to buy kids, which are always healthy due to AI. She has also taken up a job at the Anganwadi centre, and earns around 15,000 – 16,000 a month. Her children all go to school and her husband has begun to support her as well. Balutai says: “I am very proud that I am earning by myself. I not only do goat farming, but also have convinced many of my friends to go for the goat farming workshop offered by Mann Deshi. Earlier there was little awareness about goat vaccination and AI, and even government veterinarians did not come to this area. Now, thanks to Mann Deshi, people here are more receptive to vaccination and AI for goats.”

Thank you so much again for all your support ! 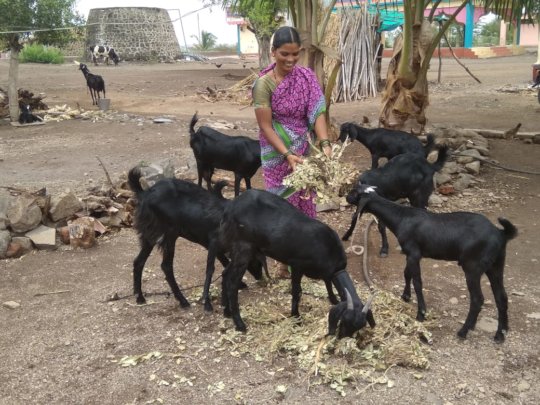 By Prabhat Sinha - Nayan's life in the travel coach program 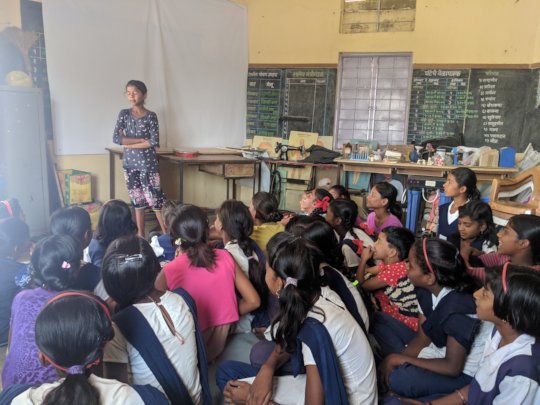 Most of us know of only one world -the world which we saw on the maps or the one which our eyes followed as our geography teacher revolved that little blue-green globe kept on her desk with the tip of her single fingernail .But what we need to realize is that there are billions of small little worlds in this planet of ours and occasionally we just might get an opportunity to get a glimpse of one or the other.

A long distance away from the hustling-bustling city, across the dried up Man ganga river lies a quaint little village. The name of the village itself means god of dust and that’s exactly the only thing which the lord has blessed this village with. A huge expanse of barren, dried up land with no source of water and little vegetation. However, dust gives birth to everything and everyone. we humans too are made of dust but a little girl of this village called Nayan has been made with a tinch of magic dust brewed by the lord of this village himself for she was born in a house just beside his temple. A child of 12, her day might seem quite ordinary for she gets up, has a bath and then goes to school. A school whereshe studies, plays with her friends and then wrestles in the afternoon. Yes, wrestling. Never will you see a child so young be so passionate about something, as for the whole day her tiny little feet keep tapping on the floor and a single chant of ‘wrestling, wrestling...’ keeps playing in her head until and unless its time.

The first sign is when the Mann Deshi Champions coach pulls up on his bike along with the wrestling mats. Barely containing her excitement, she and her best friend run off to change their clothes and remove their jewellery for they want to be fully prepared when the coach enters and then they just might get a chance to wrestle first. Every day is an intense workout but that beautiful, mischievous smile from Nayan’s face never wavers. No matter how many times she is thrown down , she jumps up. Gives a broad grin for she knows that the next game is going to be hers. This goes on for hours until the coach calls it a day, for its time for lunch. However, the collective groan and heavy sighs are unmistakable. The children are hungry but the hunger in their heart for the rush, for that energy surpasses their body’s needs. Talking about energy, the reservoir of which the child possesses is insane. One might think that an afternoon full of rolling and slamming down people would leave her drained out for the rest of the day but that’s where you are wrong because you might as well take her seriously when she says ‘we are the children of the soil on which we wrestle on, we don’t need energy , we are born with it’ .

After wrestling, Mann Deshi Champions coach prepares all the young girls for 1 hr of storytelling session where children tell their daily lives stories. Last week Nayan told a story of how she saved a girl from drowning into the water well.

Nayan learned swimming in the water well. Nayan goes for swimming. It’s a little water well where her mother washes the clothes. Facilities and privileges are no match for skill and passion and Nayan proves this.

She swims continuously, the length of the tank for hours but even here never thinks of leaving her friends behind. Very slyly she coaxes one of her friends every other day to come to the water well and the moment they stand on the edge, she pushes them in and while they are drowning, she instructs them ways to get themselves out of water. Though hilarious, this may seem like an absurd way of teaching not to mention a quick one too. But this is how Nayan learnt swimming and that too ,in a single afternoon.

For a place so underdeveloped, the mindset of the people of the village  is quite progressive or at least that is true in case of Nayan’s parents. Her parents are adamant in providing every opportunity to both their son and daughters alike for their sole goal in life is to see their children make a name for themselves. The children in turn are equally driven to prove their worth. When asked about the competitions she has participated in, Nayan’s eyes widen under a veil of seriousness for she moans that she hasn’t won ‘big gifts’ yet but knows that with the intense practice sessions she is bound to succeed.

This youthful zeal coupled with the maturity and seriousness far beyond her age is the reason why this child will succeed in whatever she chooses. Nayan has a long path to travel and not a straight one either for the burden of expectations on her shoulders is heavy and the obstacles on her path are many. And even Though she is a child of the soil, she never really learnt to bite the dust. 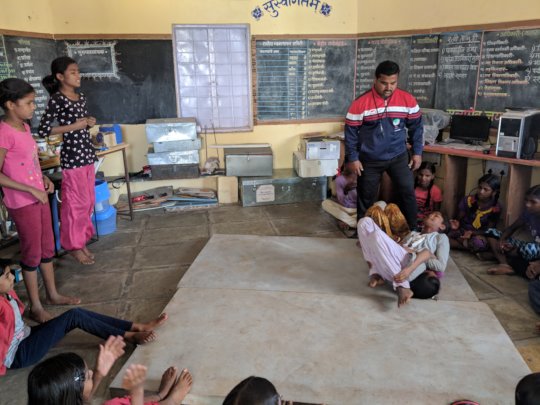 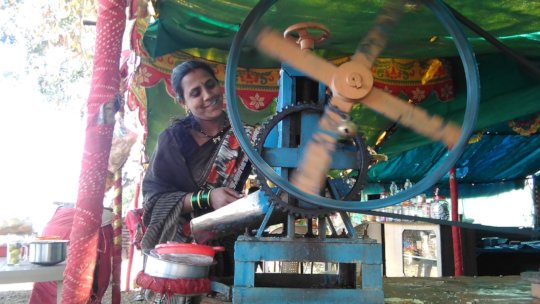 Rupali at her Juice Center

Rupali lives in Bidal village with her husband and children. She lost her mother at a young age, and had to shoulder family responsibilities since then. Rupali could only complete her education up to Class 7, and was married off at the young age of 15. Her husband was a wage labourer, and barely earned enough to sustain their family.

Rupali wanted to contribute towards the family income. She decided to earn some money through livestock rearing and bought two cows. With the money she raised from selling their milk, she managed to buy two more cows. However, Rupali lacked capital to expand the business further and so decided to take a loan. She availed a loan of INR 30,000 from the Mann Deshi Bank. With this money, she decided to start a hotel business. She had heard about the programmes offered by the Mann Deshi Business School and decided to enroll her in the Deshi MBA programme. Through the workshops and exposure visits, she learnt about business management and expansion and gained business skills like marketing, building customer relations, accessing new markets etc. She also learnt about financial management such as budgeting, availing loans and maintaining savings, through the financial literacy workshops.

Today, Rupali’s hotel business is doing very well, and she has also recently opened a juice center. Before taking the DMBA course, her income was INR 6,000, while now she earns INR 9,500.

Rupali says ‘I am proud of where I am today, as I got here through my own hard work. I also gained the respect and appreciation of my family and community members. I am now more active within my community and participate in social events regularly.’

Thank you so much for all Global Giving supporters without which this would have not been possible !

‹ 1 ... 6 7 8 9 10 11 12 13 ... 48 ›
WARNING: Javascript is currently disabled or is not available in your browser. GlobalGiving makes extensive use of Javascript and will not function properly with Javascript disabled. Please enable Javascript and refresh this page.