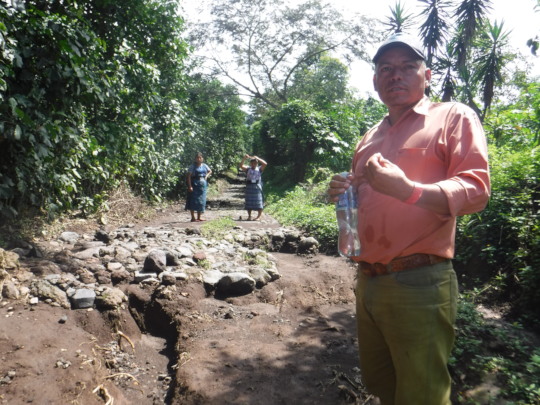 ATC counts on the help of community leaders to plan and direct our projects on the ground. Today we share with you the latest reports from two community representatives who have reached out to us in search of water filters and solar lamps.

Unfortunately, this month ATC has been struggling with the importation officials to arrange the arrival of 200 water filters – held up by the shipping company and customs.  At long last, the filters are due to arrive by the end of this week.

Although the delay was unplanned, the distribution of filters next week enables us to cover the back-end of relief services as donations and international attention begins to dwindle one month after the explosion.

Edgar is the representative of the Panimache and Palo Verde villages near Volcan Fuego. He reports:

The people of Panimache and Palo Verde do not live in shelters, they have returned to their homes, and are having problems with drinking water.  Since the explosion, they have not fixed pipelines, remaining dependent on donated bottled water. Now they have water in their homes, but the water does not feel safe, they believe that it is not suitable for consumption, so they boil the water with firewood before consuming.

Don Edgar considers that a priority need is to have water filters. But as for electric power; there is inconsistent power from the grid, affected by thunderstorms or when the volcano rumbles. Being a distant community, they are left without light for a week or more in these cases, without a way to charge their cell phones and needing to buy candles to avoid being in the dark.

Another priority need at the moment is to have a pump that will serve to draw water from a well and send it with pressure to the houses. The community is 7 kilometers from the volcano.

We agreed that priority could be given to the people who present the greatest need and few resources, due to the current situation, he considers that these resources should be given to all the people of the community as they are all equally without clean water, lighting, jobs, and arable land.

Don Ancelmo is the vice president of the COCODE of the village Rochela.  He reports:

The community of Rochela, is located 7 kilometers from the volcano, is the last village in that area, so the services are more difficult to restore.

There are 105 families that live in this community. They did not have human losses, but have lost all their crops, banana, avocado, maxan, due to ash fall.  There are no sheltered people, they all live in their homes. Very few people left and went to the shelters in Siquinala.

Electricity is a necessity because with electrical storms, light goes out for 3 days or more. The day of the eruption there was no electricity for 3 days. He considers that they need around 60 or 70 lamps in the community to provide basic access to cell phone charge and lights during the frequent power outages.

In the case of water service, the situation is dire.  All the water pipes were buried, broken or carried by the ash rivers that passed through the place. In some places the water has not been installed, they need pipes and work, but they have not organized themselves to fix this problem.

Now they consume water from a public tap without a filter.  Some people boil it, others just drink it from the tap. Previously, they consumed the bottled water that was brought to them by volunteers and organizations. Their water comes from small springs, not enough for the community, and is only operational in some sectors of the village. However, they have managed to organize themselves to pipe this water in these areas.  Publically accessed water filters will reduce the spread of intestinal diseases as the village recuperates from the disaster. 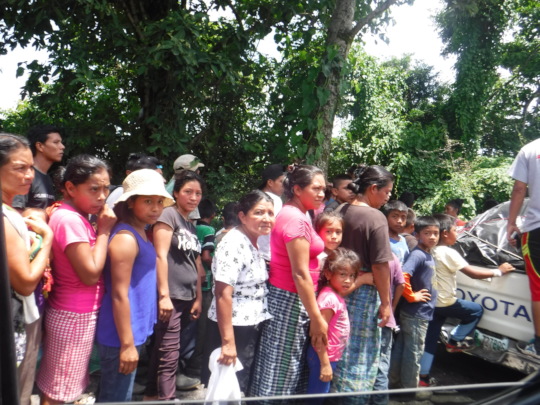 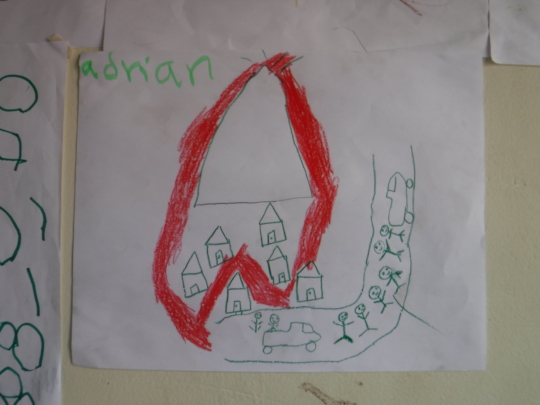 A child's drawing on the wall of their shelter

Poor emergency response procedures by government agencies spurred communities to self-organize their evacuation centers and demand resettlement assistance. This fight is due to last a long time as survivors remain crowded in schools, gyms and churches.

To lend our hand, ATC staff was directed towards relief efforts - communicating with leaders and organizations near ground zero to learn where we can help.

Our empowerment field staff visited several evacuation shelters and surviving villages to interview leaders about community needs. They said they have stockpiled clothes, food and water that arrived from the generosity of strangers, but that the flow of donations has slowed considerably and is not expected to continue.  Men in the shelters must return to the volcano to fetch firewood for cooking in their city shelters. Donated drinking water will soon run out. People in surviving villages are cut off from electricity and water quality has deteriorated since the eruption.

Through our Mayan Power and Light program, we have water filters, solar lamps and even fuel-saving stoves that could benefit the shelters. SEA, our women-owned social enterprise, has donated lamps and staff to assist in relief efforts.

Thanks to the many donors to our Globalgiving Guatemala Volcano Emergency project, 200 water filters and 57 solar lamps are ready to be distributed next week.

To ensure the filters are used well, our empowerment staff will be piloting our new Mayan Power and Light curriculum with a half-day training on family health and sanitation including the importance of water filtration and smoke reduction in the home. Water filters and sanitation training will reduce the spread of parasites and viruses in the shelters where up to 8 families are sharing a room. 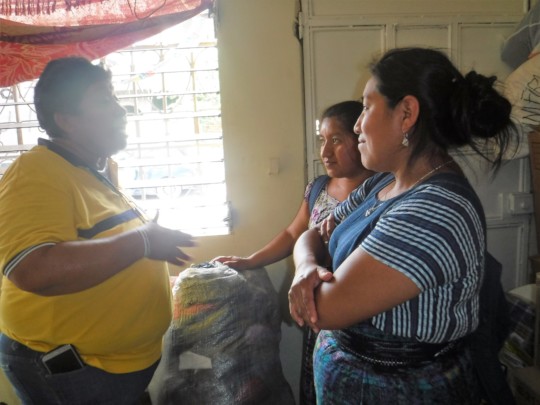 Our Visit with Community Leaders at Volcan Fuego 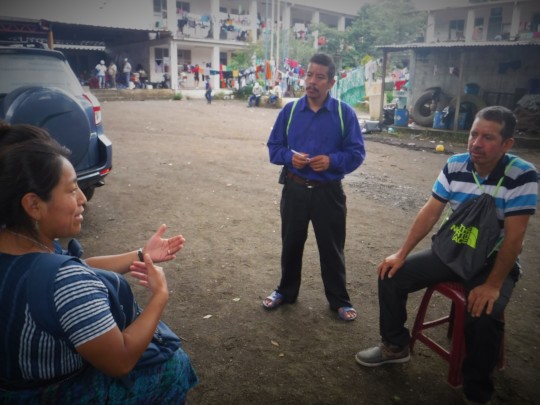 The shelters worked hard to resist take over by government institutions accused of stockpiling donated materials and responding irresponsibly to the crisis. The community run shelters have high levels of trust and accountability, rendering them ideal collaborators to ensure the filters are used to benefit the most people.

La Trinidad evacuees are living in a school housing 8 families in each classroom. 800 people are organized into kitchen committees to cook in a large outdoor kitchen. 15 water filters would provide them with ample drinking and cooking water for over a year. When families are resettled and the shelter closes down, there will be a public raffle to send a filter home with a family.

The two villages of Panimiche 1 and Palo Verde remain inhabited by over 90 people each. These villages have been cut off from road access due to the pyroclastic flows. They have no electricity and are suffering from extremely poor water quality.

200 water filters are currently shipping from Miami to Guatemala City. We hope we can deliver these to the villages this week.

57 solar lamps are also ready to travel to the villages this week, enabling people to charge their cell phones and see at night. 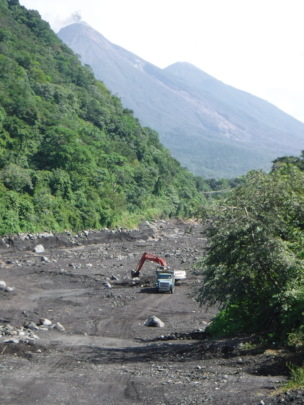 Pyroclasitic flow from Volcan Fuego
‹ 1 ... 6 7 8 9 10 11 12 13 ... 33 ›
WARNING: Javascript is currently disabled or is not available in your browser. GlobalGiving makes extensive use of Javascript and will not function properly with Javascript disabled. Please enable Javascript and refresh this page.