Anthony Has a Reason to Smile 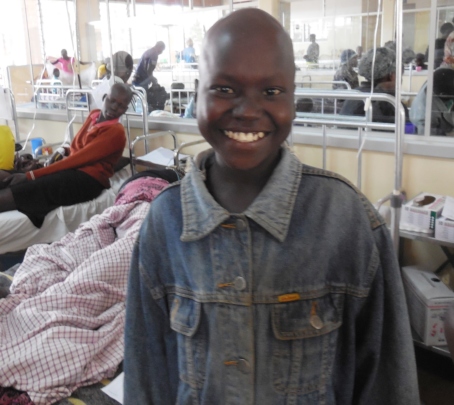 In December of 2016, Anthony came to our hospital, St Mary’s Hospital Lacor in Gulu, Uganda. He was 11 years old.  Anthony is from the Moyo District in the north eastern part of the country and he lives over 100 kilometers from Gulu.  His father is raising Anthony and his two brothers – one brother is Anthony’s twin – as a single parent.  When Anthony arrived on our Burkitt’s ward, he presented with swelling of his abdomen which had been rapidly progressing for one month.  His abdominal swelling was associated with pain and he also had fevers during the night that were followed by sweating.  When we examined him, he had a distended abdomen and we could easily palpate or feel masses within his abdomen.  He also had involvement of his spleen.  But, he was able to walk in spite of his painful and distended abdomen.  And, Anthony was actually able to give us most of the history of his illness.  He underwent a biopsy in order to diagnose what we suspected was Burkitt lymphoma (BL).

Once we received confirmation of Anthony’s diagnosis as being BL, he was started on treatment right away. He developed a common side effect of chemotherapy called neutropenia which means that his infection fighting white blood cells in his body were too low. Therefore, he was at risk of acquiring a serious infection that might potentially result in the loss of his life.  His next cycle of chemotherapy had to be delayed in order to allow his bone marrow which makes these important blood cells to recover.  But, Anthony was strong and he managed to get through this period of neutropenia despite our own limited resources to protect him against life-threatening infections.  Although he received a second cycle of our first line therapy without any side effects, an evaluation of his disease status showed that he was not responding to treatment as we had hoped.

Anthony comes for regular follow up visits. I saw him recently and he was very happy and healthy.  His life is normal again, he is with his family and he cannot wait to go back to school as soon as the new term begins.  His smile said it all – “thank you, thank everyone and every kind heart that gives to save lives like mine and many of the children with Burkitt Lymphoma”.

Emily Wants to Become a Nurse 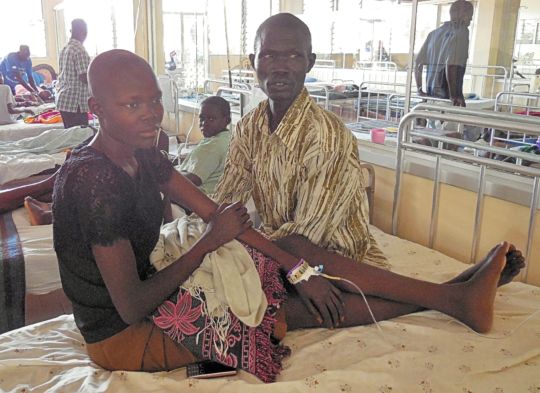 Emily and her Father

During my recent visit to St. Mary’s Hospital Lacor in Gulu, Uganda, I had the opportunity to meet many of the children and adolescents on what is called the “Burkitt’s Ward”.  One of the adolescents who I met was a 17 year old girl named Emily.  Unlike many of the other patients and parents on the ward, Emily and her father were able to speak English.  They both talked to me about Emily’s history and treatment for Burkitt lymphoma (BL).

In the late spring of 2016, Emily developed abdominal pain and swelling. Her parents, both teachers, took her to the local hospital nearby her home in the Arua District of Northern Uganda.  She was thought to have had an ovarian cyst which was excised in July of 2016.  Upon further examination of the cyst by pathologists, it was determined that she had BL.  Ovarian tumors are common presentation features of BL in girls – Emily was 16 years old at the time of her initial diagnosis.  The doctors at the local hospital referred her to Kuluva Hospital which is located in a suburb of Arua. The doctors at Kuluva Hospital are familiar with the treatment of BL and after further tests were performed, she began treatment according to a regimen similar to what is used at St. Mary’s Hospital Lacor for newly diagnosed patients with BL.  She completed six cycles of therapy in November of 2016 and was then discharged home.  She was able to return to school, but soon afterwards developed abdominal pain and swelling.  The doctors at Kuluva Hospital referred Emily to St. Mary’s Hospital for treatment of suspected recurrent BL.

Once Emily arrived at Lacor Hospital, she underwent more tests, including a biopsy of one of the abdominal masses detected by scans. The diagnosis was again BL.  Because she recurred so early after the completion of initial treatment, the decision was made to give her what is called Second Line therapy.  Second Line therapy consists of different drugs that are considered effective against BL, but it is a more intensive treatment regimen that requires more complex care than what could be provided at Kuluva Hospital.  As there has been success with Second Line therapy in many patients who have had resistant disease, this was considered the best treatment option for Emily.

Coming to Lacor Hospital has been difficult for Emily because it is over 250 kilometers away from her home. It takes nearly 6 hours by bus to come to Lacor.  Her father reports that the costs of travel are becoming difficult for her family to afford because it costs approximately $20 for a round trip bus ticket for both Emily and her father.  While this cost might not seem so high to donors to this project, travel costs such as these impose a substantial financial burden on poor families in Uganda who live on less than 2 dollars a day.  When families such as Emily’s have more than one child, it can be extremely difficult to ensure that the other children are provided for when the one child with cancer is away from home.

Emily has nearly completed treatment and signs are optimistic that her BL has responded well to the new treatment. She and her father understand that it is important for her to complete all four cycles of treatment in order for her to have the best chance of a long-lasting cure.  She loves school and misses going to classes and her friends, too.  When I asked her what she wanted to do when she finished school, she said that she wanted to become a nurse.  This is because of the example that has been set by the many nurses who have cared for her throughout this difficult time in her life.  She just wants to be able to help sick children like the many she befriends on the ward.

Without your donations, St Mary’s Hospital Lacor would not have been able to offer Emily treatment for her relapse. And, thanks to your donations, Emily has a chance to fulfill her dream of becoming a nurse.

Back to Normal from a Burkitt's Face 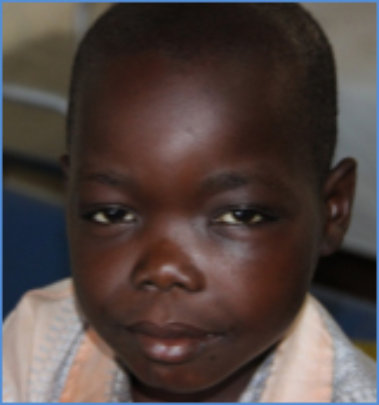 Our hospital, St Mary’s Hospital Lacor in Gulu is located in Northern Uganda in sub-Saharan equatorial Africa. One of the most common childhood cancers that we see is Burkitt lymphoma (BL).  The incidence of BL is considerably higher in Ugandan children than it is in the USA or Europe.   Although BL is a rapidly growing tumor, it responds extremely well to treatment that consists of chemotherapy alone.

In our experience, the vast majority of the families whose children are diagnosed with BL live below the poverty line. Accessing chemotherapy for treatment of this highly curable cancer was once only a dream for these vulnerable families.  But, thanks to donors and well-wishers, such as all of the wonderful people who have contributed to this project, the children are able to receive the chemotherapy that they need.  And, their families receive support for other necessities such as food during their child’s hospitalization.

We wish to share the story of VO who benefited from this project. He was eight years old when he came to St Mary’s Hospital.  Prior to admission, he had a one month history of swelling in his left jaw that was associated with pain and excessive sweating.  The mass in his jaw was so large that the left side of his face appeared to be almost twice the size of the right side of his face – giving him a distorted appearance.  Once the diagnosis was confirmed as BL, he was started on chemotherapy. He completed all planned chemotherapy and has been cured of BL for more than two years.  In addition, he fully recovered from the disfiguring effects that were once caused by what we would typically call a “Burkitt’s face”.  He has returned to school, enjoys playing with his mates, and looks like a normal child.

One parent whose child also benefited from the treatment program supported by donations coming from this project had this to say, “After my child developed abnormal swelling on the face, I thought it was a demonic power causing this. I wasted time and money seeking the service of a traditional healer in vain. When my child received chemotherapy from Lacor Hospital, the swelling reduced quickly as if the doctors used magic. Besides it was free of charge and now my child is healthy and happy again. God should continue blessing the sponsors of the cancer treatment program’’.

In addition to treating children with BL at our hospital, we work with a network of hospitals in our region and their communities in order to ensure that children with suspected BL come to our hospital as soon as possible. Our goal is to make every person, including health care workers, aware of the signs of BL so that treatment is sought earlier and to ensure that not only health workers, but also the public know that our hospital is able to offer chemotherapy free of charge thanks to your generous donations to this project.