What's New at Mickaboo - and Oprah!

By Pamela A Lee - Development Director 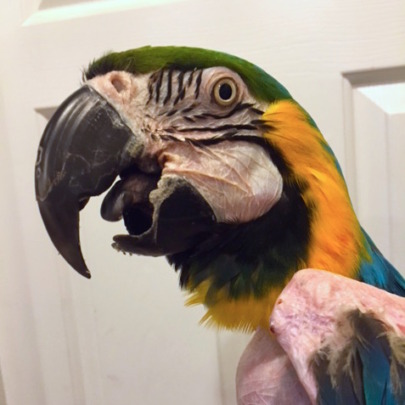 Due to your help and that of many other generous souls, we were able to take in several birds recently.  Here are a few of their stories:

Goldie is a blue-and-gold macaw about 29 years young. When Goldie came to Mickaboo, we found she had been hiding a terrible sinus infection with a “superbug” (a drug-resistant bacteria). One of our amazing avian veterinarians launched a major assault of various medicines and daily nasal flushes (Goldie HATED that part).  Goldie is back in her foster home now, and feeling better. But she racked up a large vet bill, and she's not out of the woods yet.

Willie appears to be a clean, white, happy Umbrella Cockatoo in the picture attached to this project report. Only a short time ago, she was a filthy gray bird, living in a tire shop with her insides hanging out -- literally.  Willie had what they call a “prolapse” of her lower intestinal area. Willie was in a lot of pain, and would not have lived much longer without treatment.  An animal control agency rescued Willie, connected with Mickaboo, and Mickaboo sent Willie to one of the nation’s finest avian vets.  The doctors are still working on Willie's "derriere problem" - major surgery has been scheduled.

Bernie the cockatiel was surrendered to Mickaboo due to changes in his human family's lifestyle. When he came to us, his tiny cage and toys were filthy and full of bug debris; his perches were of the sand paper type. His diet consisted of grocery store seed mix, cuttlebone, and grit - all unsuitable, given our current knowledge of avian husbandry. Bernie hadn't had proper vet care in a while, as evidenced by his inability to walk or perch well. When Mickaboo took him to a vet, the doctor said that Bernie could be in a lot of pain in his left knee from severe arthritis. He is now on anti-inflammatory oral medications and will need a recheck to see if his dosage can be reduced. He is being housed in a comfortable tub with no perches above the ground. He still drags his left leg and prefers to stand still.

We are able to help these birds and many others because of YOU and the unflagging, generous help of our volunteers, two of which were profiled in O Magazine's article, "No Ordinary Love".

Email us at pr@mickaboo.org with questions or comments about the above. We will continue to keep you posted on Mickaboo happenings. For now, circle March 16 on your calendars - we'll tell you later about a special event happening then! 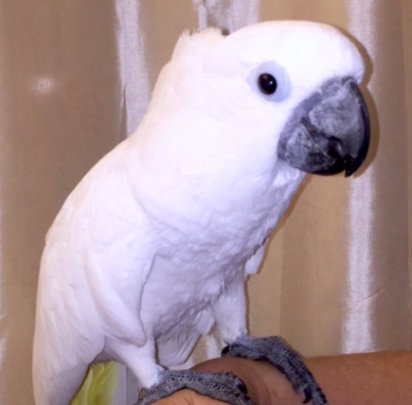 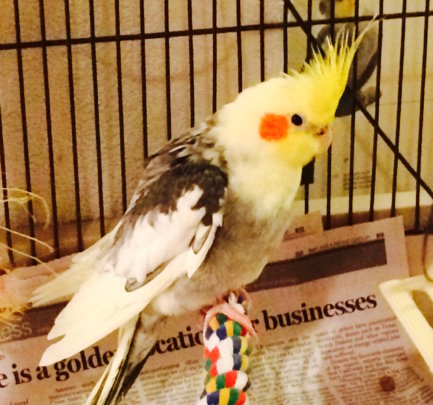 Bernie, a cockatiel with arthritic symptoms

We are Thankful for YOU

By Pamela A Lee - Development Director 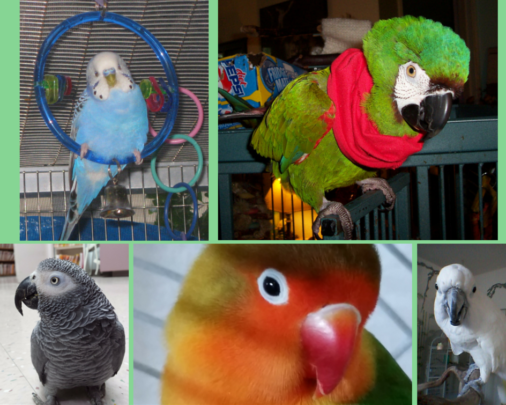 The many faces of Mickaboo

Thanks to your collective financial support this year, Mickaboo has been able to help more than 300 birds with their veterinary needs, ultimately adopting more than 120 to permanent homes. As we gather with family and friends to celebrate all that we are thankful for, I want you to know that all of us at Mickaboo are especially grateful for YOU.

YOU help us to care for these beautiful and intelligent creatures, making a difference both for them and their guardians.

We hope to see you at our Annual Holiday Party and Funraiser (Walnut Creek, December 5) as we celebrate the year’s accomplishments and re-energize the organization for 2016.  The event will feature: 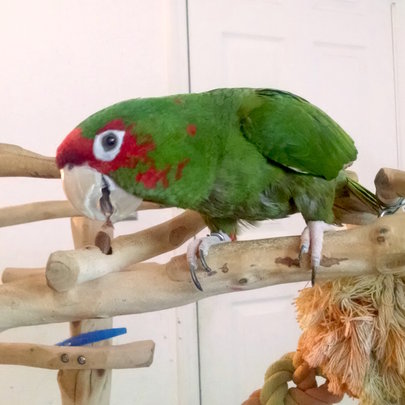 THANKS to all who voted for us in the recent GlobalGiving Photo Contest. We did not win, but we made more people aware of Mickaboo and how we can help them and their birds, an important step toward our goal of making better the lives of birds who live in our homes. Read more about what we do in our latest newsletter. If you are in the Sacramento / San Francisco / San Jose area, visit us at one of the many public events in which we participate.

YOUR help and that of our many volunteers are what make Mickaboo miracles happen, day after day, for so many of our intelligent and beautiful parrot friends. Your donation now can go further; a matching gift event is underway TODAY! On September 16, 6 am - 9 pm PT GlobalGiving will match your online donations at 30%, up to $1,000 per donor per nonprofit, until GlobalGiving has given away $70,000. Go to Mickaboo's GlobalGiving page to take advantage of this opportunity.

Your donations help birds like TJ, a 15+-year-old mitred conure. His owner of 14 years surrendered TJ to Mickaboo, saying TJ was aggressive and loud. We think TJ simply didn't have a chance to impress his guardian family. Here is a video of TJ in his foster home, showing off his speaking skills!

Up until recently, TJ had been a happy-go-lucky guy in his new foster home. He loved playing and exploring with anything, anywhere…right up until he fell off his cage, laying on his back partially paralyzed. After about an hour he improved markedly but he was still struggling. He wasn’t able to feed himself for days afterward. All signs point to TJ having had a major stroke followed by smaller “mini-strokes”. He is still hospitalized, not stable enough yet to return home, though the vet believes he will soon.

TJ's vet bills have exceeded $2400 so far, and hospitalization costs continue to mount. Would you consider taking advantage of this matching gift opportunity to help TJ and our other birds heal so they can find permanent, loving homes?

Would you want to adopt TJ after he recovers?  Email us at coordinator-conure@mickaboo.org!

‹ 1 ... 8 9 10 11 12 13 14 15 ... 25 ›
WARNING: Javascript is currently disabled or is not available in your browser. GlobalGiving makes extensive use of Javascript and will not function properly with Javascript disabled. Please enable Javascript and refresh this page.