Pakistan makes progress in the fight against polio 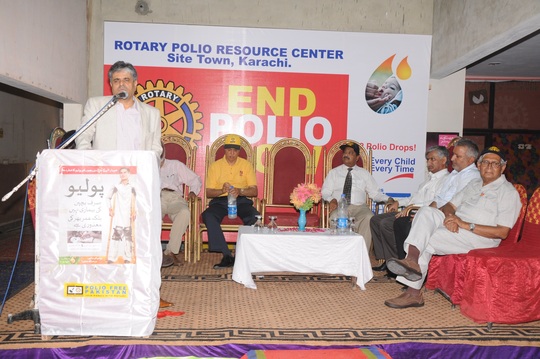 Pakistan is one of three countries worldwide where the wild polio virus still circulates, but Rotarians are doing their part to change that and it appears these efforts are beginning to pay off. Last year, a total of 198 polio cases were reported in Pakistan, but so far in 2012 only 56 have been reported. Rotary’s National PolioPlus Committee in Pakistan, led by their chair Aziz Memon, has helped with the establishment of polio resource centers in four areas at high-risk for the disease, including Karachi, Sindh; Killa Abdullah and Pashin, Balochistan; and Peshawar, Khyber Pakhtunkhwa. In addition to ensuring that children get immunized against polio, the resource centers also provide much needed basic health services to these underserved communities. The first center was inaugurated at Bright Education Society in Sindh Industrial Training Estate (SITE) Town and consists of two full-time doctors for general health care and six social mobilizers to speak with families who have refused the polio vaccine for their child.  In many cases, access is limited in these areas due to security and so having a local center allows health workers to reach these families in spite of security challenges.

Rotarians in Pakistan are also conducting health camps, establishing permanent immunizations sites at local hospitals, and seeking the support of community leaders for polio eradication.  As part of this effort, they have teamed up with partner organizations like Coca Cola Beverages Pakistan who provide access to billboards to help raise awareness about polio eradication, and transport for vaccines along with support for a range of other projects.  “We are seeing progress in Pakistan’s fight against polio, and we are proud of the work our Rotarians are doing to support that effort,” wrote John Germ, vice chair of Rotary’s International PolioPlus Committee.  With these sustained efforts, we are hopeful that Pakistan will soon wipe out this dreaded disease within its borders, moving us ever closer to delivering on our promise of a polio-free world. 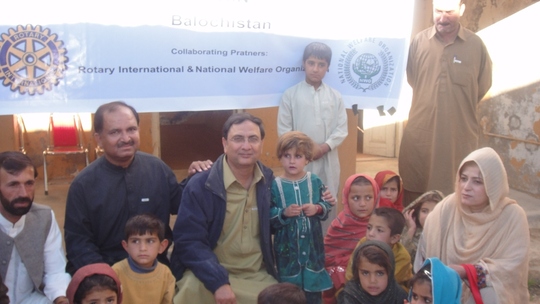 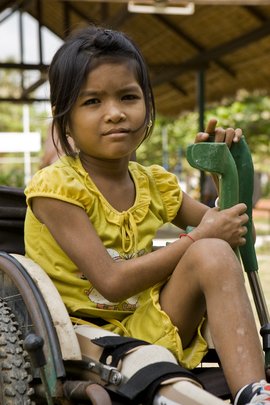 Rotary is "this close" from eradicating polio.

Ahead of the UN General Assembly, Evanston-based humanitarian group holds strategy session with members from around the world including Pakistan and Nigeria

Rotary International aims to send a clear message to the United Nations (UN) General Assembly convening in September in New York: The world’s governments must act swiftly and decisively if the crippling childhood disease polio is to finally be eradicated.

To that end, about 50 Rotary leaders from a dozen countries met on Aug. 21-22 at the humanitarian group’s world headquarters in Evanston, Ill., to devise strategies on how to persuade the international community to ante up the resources required to beat polio once and for all. Polio eradication has been Rotary’s top priority since the 1980s.

The group included Rotary leaders from Pakistan and Nigeria, two of the three countries where polio remains endemic (the third is Afghanistan). Participants will return to their homelands armed with the tools they need to advocate on behalf of polio eradication at all levels of government and society.

The focus then shifts to New York, where Rotary leaders will attend a UN General Assembly breakout session on Sept. 27, where UN Secretary-General Ban Ki-moon is expected to issue a strong call-to-action urging UN member states to ramp up their support for polio eradication.  Rotary will join a group of national leaders and other donors, including the Bill & Melinda Gates Foundation, in what is expected to be a round of announcements on commitments.

The urgency at the UN stems from action taken in May by the World Health Assembly, which declared polio eradication to be a “programmatic emergency for global public health.” Although new polio cases are at an all-time low – fewer than 120 worldwide so far this year – the eradication initiative faces a funding shortfall of nearly $1 billion that could derail the entire program. If eradication fails and polio rebounds, up to 250,000 children a year could be paralyzed.

Polio cases have plummeted by more than 99 percent since 1988, when Rotary partnered with the World Health Organization, UNICEF, and the US Centers for Disease Control and Prevention to launch the Global Polio Eradication Initiative.When the initiative began, polio infected about 350,000 children a year, compared with fewer than 700 for all of 2011.

Rotary’s chief responsibilities are fundraising – to date, Rotary clubs worldwide have contributed nearly $1.2 billion  – and advocacy, a role of increasing importance as the end game draws near. Earlier this year, Rotary surpassed $200 million in new money for polio eradication in response to a $355 million challenge grant from the Gates Foundation, which promptly contributed an additional $50 million in recognition of Rotary’s commitment.

Rotary is a global humanitarian organization with more than 1.2 million members in 34,000 Rotary clubs in over 200 countries and geographical areas. Rotary members are men and women who are business, professional and community leaders with a shared commitment to make the world a better place through humanitarian service. 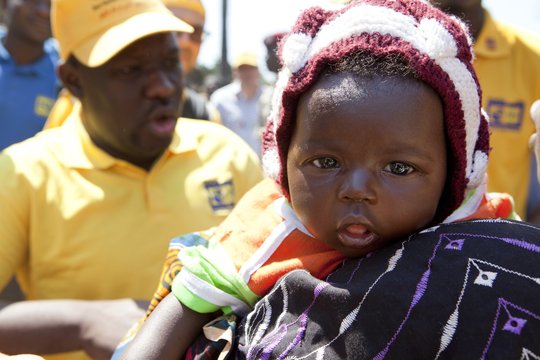 A child in Chad is immunized against polio

Despite the dramatic drop in polio cases in the last year, the threat of continued transmission due to funding and immunization gaps has driven the Global Polio Eradication Initiative (GPEI) to launch the Global Polio Emergency Action Plan 2012-13.

The plan aims to boost vaccination coverage in the three remaining polio-endemic countries -- Nigeria, Pakistan, and Afghanistan -- to levels needed to stop polio transmission. Health ministers meeting at the World Health Assembly in Geneva adopted a resolution on 25 May that declared “the completion of polio eradication to be a programmatic emergency for global public health.”

Polio eradication activities have resulted in several landmark successes since 2010. India, long regarded as the nation facing the greatest challenges to eradication, was removed from the list of polio-endemic countries by the World Health Organization (WHO) in February. Outbreaks in previously polio-free countries were nearly all stopped.

During that same time span, however, polio outbreaks in China and West Africa due to importation from Pakistan and Nigeria, respectively, have highlighted the continued threat of resurgence. Failure to eradicate the disease could lead within a decade to paralysis of as many as 200,000 children per year worldwide.

“Polio eradication is at a tipping point between success and failure,” says Dr. Margaret Chan, director-general of WHO. “We are in emergency mode to tip it towards success -- working faster and better, focusing on the areas where children are most vulnerable.”

Eradicating polio would generate net benefits of US$40-50 billion globally by 2035, with the bulk of savings in the poorest countries, based on investments made since the GPEI was formed, savings from reduced treatment costs, and gains in productivity.

“We know polio can be eradicated, and our success in India proves it,” says Rotary International President Kalyan Banerjee. “It is now a question of political and societal will. Do we choose to deliver a polio-free world to future generations, or do we choose to allow 55 cases this year to turn into 200,000 children paralyzed for life, every single year?”

The GPEI’s emergency action plan was developed in coordination with new national emergency plans. The plan builds on India’s success and outlines a range of new strategies and initiatives to better support polio eradication efforts, including:

Already, funding shortages have forced the GPEI to cancel or scale back critical immunization activities in 24 high-risk countries, leaving more children vulnerable to the disease and polio-free countries exposed to the risk of reintroduced transmission.

“All our efforts are at risk until all children are fully immunized against polio -- and that means fully funding the global eradication effort and reaching the children we have not yet reached,” says UNICEF Executive Director Anthony Lake. “We have come so far in the battle against this crippling disease. We can now make history -- or later be condemned by history for failing.”

Full implementation of the emergency action plan is hindered by a funding gap of nearly $1 billion through 2013.

“We are all responsible for creating a polio-free world while we still can,” says Chris Elias, president of global development at the Bill & Melinda Gates Foundation. “Achieving this goal is a critical step in protecting all children from vaccine-preventable diseases.”

Such measures are reserved for responding to global health emergencies, such as the H1N1 pandemic and the 2004 Indian Ocean tsunami -- and will generate a massive surge in technical capacity, real-time tracking of program performance, and immediate implementation of corrective action plans as necessary. In March, The Rotary Foundation Trustees reaffirmed that polio eradication is the Foundation’s urgent priority. In addition, Rotary senior leaders have launched a series of one-on-one meetings with the heads of state of the polio-endemic countries.

“We need everyone’s commitment and hard work to eradicate polio and cross the finish line,” says Dr. Thomas Frieden, director of CDC. “It won’t be easy, but together we can eradicate polio forever and for everyone.”

The Global Polio Eradication Initiative (GPEI) is spearheaded by national governments, the World Health Organization (WHO), Rotary International, the US Centers for Disease Control and Prevention (CDC) and UNICEF, and supported by key partners including the Bill & Melinda Gates Foundation.

Read a statement of support by Dr. Robert Scott, chair of Rotary’s International PolioPlus Committee, for the World Health Assembly’s consideration of a resolution that would declare polio eradication a global emergency for public health.