We're getting closer to a polio-free world 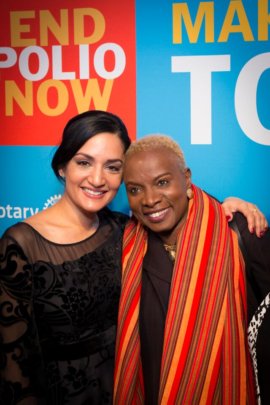 This announcement comes on the heels of another important landmark. One of the three strains of wild poliovirus (Type 2) was declared eradicated on 21 September, and we will soon pass three years without a case of Type 3. This means that only one type of the wild poliovirus continues to circulate.

Polio is on track to become the second human disease ever to be eliminated from the world (smallpox is the first). To date, Rotary has helped 194 countries stop the transmission of polio through the mass immunization of children. Rotary's new funding commitment, announced in advance of the Oct. 24 observance of World Polio Day 2015, targets countries where children remain at risk of contracting this incurable, but vaccine-preventable, disease.

To maintain the success against polio in Nigeria and across the continent of Africa, the global effort to end polio received an additional $40.4 million boost from Rotary to support immunization activities and surveillance spearheaded by the Global Polio Eradication Initiative.

Rotary provides grant funding to polio eradication initiative partners UNICEF and the World Health Organization, which work with the governments and Rotary members in polio-affected and high-risk countries to plan and carry out immunization activities.

To date, Rotary has contributed more than $1.5 billion to fight polio. Currently, there have been only 51 cases of polio reported in the world in 2015, down from about 350,000 a year when the initiative launched in 1988.

Rotary should be proud of the important role we have played in this achievement, including granting more than $207 million to eradicate polio in Nigeria, and contributing countless volunteer hours.

The success we saw in the fight to end polio this year wouldn't be possible without the support of health workers, local governments, Rotary and Global Polio Eradication Initiative partners. But it also wouldn't be possible without word of mouth and social media. This year, celebrities joined in on the #endpolio chorus with enthusiasm and urgency. Celebrity ambassadors including Salman Ahmad, John Cena, Heidi Klum, Alyssa Milano, Aseefa Butto Zardari, Alexandre Pato, Angelique Kidjo, Archie Panjabi, Isabeli Fontana and Ivete Sangalo shared social media messages about the urgent need to end polio.

As we move forward, some strategic shifts are needed to address ongoing challenges, such as missed children, surveillance quality and low immunization rates in conflict areas. With a fully funded program and global commitment to ending this disease, we have the opportunity to interrupt transmission of the wild poliovirus in Pakistan and Afghanistan in 2016, opening the door for the certification of global eradication in 2019. An increase in resources of $1.5 billion will help Rotary and its partners to focus on the last and most vulnerable children in Pakistan and Afghanistan, while continuing to protect hundreds of millions of children already living in polio-free countries.

The commitment and ingenuity of Rotarians has brought us to the threshold of one the greatest achievements in the history of public health. With continued support, we will soon see our dream of a polio-free world realized. 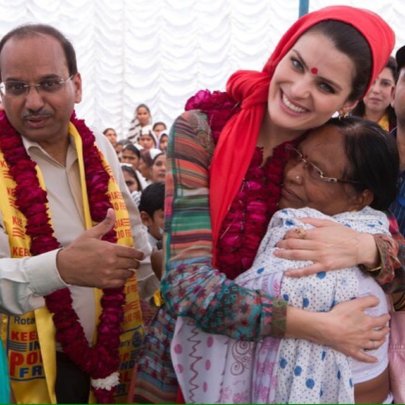 A Polio-free Africa within Reach

Rotarians reach out to immunize every child

July 24th marked one year since the last case of polio in Nigeria, the only remaining polio-endemic country in Africa. This achievement – the longest period Nigeria has gone without a case of the paralyzing disease – could signal the world will soon see a polio-free Africa, a significant global health milestone.

Rotary has been a leader in the fight to eradicate polio since 1985, when it launched the first global initiative to immunize the world’s children against polio: its flagship PolioPlus program. Rotarians have donated more than $1.4 billion to end polio globally along with countless volunteer and advocacy hours.

Nigeria’s last polio case occurred on July 24, 2014, in southern Kano state, and the continent of Africa has not seen a polio case since August 11, 2014. The World Health Organization (WHO) may soon remove Nigeria from the list of polio endemic countries. When Nigeria and every country in Africa go three years without a case of polio, WHO will certify the region as polio-free. Most recently, WHO declared India and its Southeast Asia region polio-free in 2014.

Experts caution that while today marks a noteworthy milestone, the world cannot take its sights off polio. The next two years will be critical to ensuring Nigeria remains on-track and prevent a resurgence of the disease. The support of donors, governments and partners is needed more than ever to ensure high-quality polio campaigns.

“Rotary’s 1.2 million members around the world – including the 6,890 in Nigeria – have played an important role in this progress. Rotary has worked with partners to successfully pioneer unique and innovative solutions to the challenges facing polio eradication in Nigeria,” said Dr. Tunji Funsho, Rotary’s National PolioPlus Committee chair for Nigeria.  “However, it is too soon to celebrate. The world needs to keep polio eradication a high priority to ensure the disease does not return within our borders.”

One of the unique ways Rotarians are getting involved in Nigeria is through the use of health camps, where polio vaccines are given along with a range of other health services and basic health supplies such as first aid kits, soaps and bed nets. Rotarians volunteer their time and also help pay for the medical supplies, which is helping to provide much needed access in at risk communities.  This is helping to build trust and secure a strong foundation for future public health initiatives in the country.

Beyond Nigeria, only Pakistan and Afghanistan remain polio-endemic. According to experts, Pakistan will prove the biggest challenge to global eradication efforts, with the country accounting for nearly 90% of the world’s cases in 2014. However, there has been recent progress in Pakistan, with the country reporting a nearly 70% reduction in cases in the first half of 2015 compared to the same time in 2014. Rotarians in Pakistan have adopted similar approaches to the ones utilized in Nigeria, and are hopeful that similarly success results will soon bring Pakistan and the world ever closer to the polio free goal.

Vaccinators - the heart of polio eradication

Reaching children where they are

Rotary stands with its partners on the brink of eradicating polio.  When we succeed, it will be only the 2nd disease in history behind smallpox that has been completely wiped off the face of the earth.  That historic effort has taken the work of many, from Rotarians to public health officials, governments and NGOS - all have contributed to the current status of the polio eradication effort.  So far in 2015 we have ony 24 cases of polio, with most of those found in some of the most geographically challenging regions in the world.  Still, we are finding new ways to reach children and ensure they not only receive the polio vaccine, but also other basic health services, proving that universal health care is achievable.

While Rotary and its partners have played an important role in the progress, the true recognition belongs to those who stand on the front lines of a long standing war with the polio virus, which has demonstrated itself a formidable foe. The vaccinators face a creative and persistant virus that finds its way into security challenged, remote areas.  It crosses borders, it intervenes in armed conflict and adapts itself to new environments. Despite these challenges, the vaccinators are proving to be more persistent.  Since 2013, these frontline workers have been attacked and killed in conflict areas of Pakistan and Nigeria, two of the three remaining countries where the polio virus still circulates.  There was talk that this might threaten progress to the program, but the vaccinators proved them wrong.  They kept going to work, reaching out to children in need, seeing in the faces of those children the hopes and dreams of their own.  It is with this courage and persistance that the program is able to move forward, reducing cases, reaching children, helping to educate and support families who are in need.

Nigeria has not seen a case of polio since July of 2014, and if they go a full year without a case they will be removed from the list of endemic countries, leaving just Pakistan and Afghanistan where the wild virus still circulates.  The polio network in Nigeria helped to quickly end the Ebola outbreak, illustrating the broader benefits the polio infrastructure is providing. And despite ongoing challenges in Pakistan, they are beginning to get their program back on track.  Rotarians are helping to make that progress happen, through permanent transit posts, health camps, and through incentives for the front line works who are at the heart of the battle.  We continue to marvel at the way each person plays an important role in this global effort to end a disease that has paralyzed too many children for far too long.  Thanks to the bravery of those who face the elements every day, one drop at a time, it won't be long before polio is a distant memory.  That is a legacy worth fighting for.