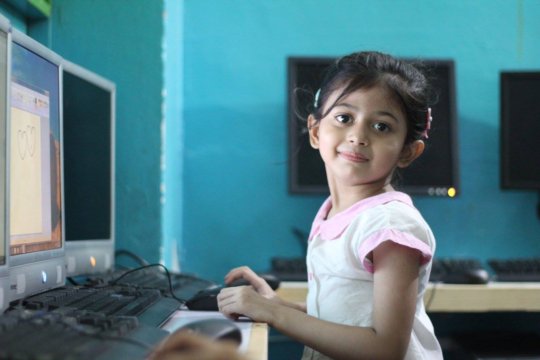 CDRS Youth Lahore Chapter celebrated the start of the Eid Holidays with a medical camp at Johar Education System School for nearly 100 patients (mostly women and children), and delivery and setup of 15 computers for the school's new computer lab (all provided by CDRS donors).

We were honored to have Dr. Nasar Qureshi (President, APPNA 2016), and renowned journalist and media personality Faisal Qureshi join us. They were very impressed with the dedicated and brilliant youth team and students and left everyone feeling motivated and appreciated. It was a very inspiring experience for everyone involved. CDRS will continue to bring more health, education, computers, community service and smiles to those who need and deserve our time, attention and resources with the support of our Zabardast friends and donors. 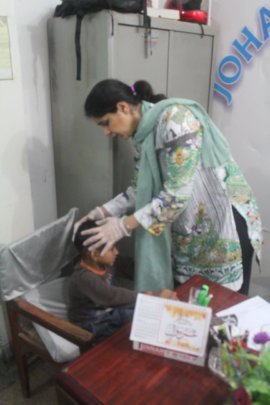 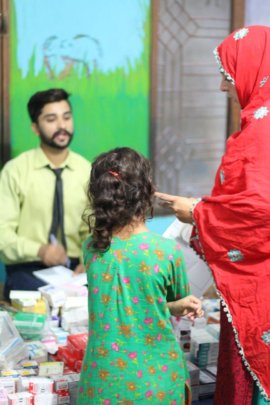 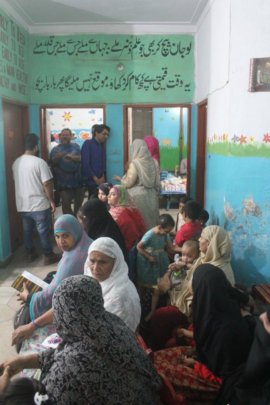 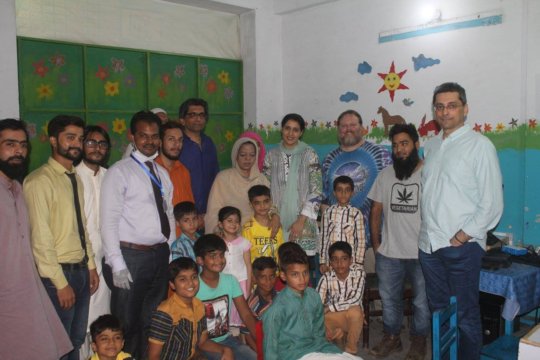 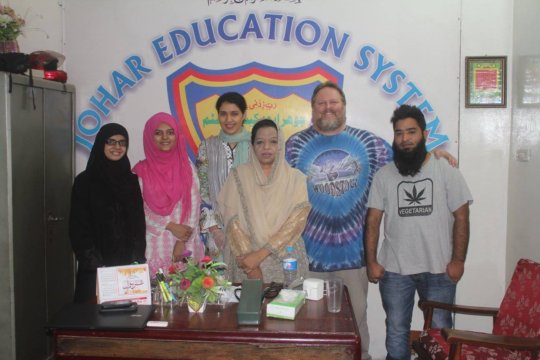 By Justin Shea - Assistant to CEO 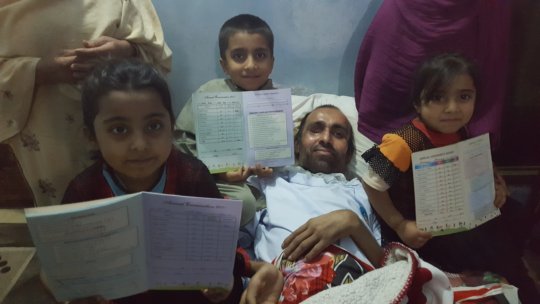 Muhammed and his children holding up their grades

CDRS has responded to many natural and human created disasters over the last twelve years. Our team is usually meeting the challenges of bringing an enormous amount of resources to an affected area of thousands in a short amount of time. Occasionally, however, we find an especially needy and deserving person suffering from an uncommon hardship, illness or injury.

The CDRS Special Patients project was started to ensure any poor person with an unusual affliction and absolutely no other means of affording treatment can receive the care and long-term financial support they need. We would like to introduce you to two of our patients who are very close to our hearts. Muhammed and little Hamid were the unfortunate victims of terror, sustaining life-threatening and debilitating injuries from bomb blasts for the crime of living their lives.

We have been providing support to Muhammed and his family for just over a year. Their lives were forever changed on Easter Sunday, March, 27, 2016. Muhammed was severely burned and completely paralyzed in a bombing that killed 75 human beings, including 29 children, and injured many more. The Taliban were targeting Christians and detonated a bomb in Gulshan-e-Iqbal Park in Lahore, where he had taken his son to celebrate the boy’s achievement of earning 1st position in his class. Muhammed shielded his son from the blast, sparing him from serious injuries.

Muhammed is completely paralyzed, unable to speak, cannot breathe on his own and is blind in one eye. Unfortunately, he had not been receiving even the most basic medical care that a burn survivor requires when CDRS found him. He had also been the sole breadwinner for his family. Our team took immediate action to address his needs.

CDRS and our donors will be sponsoring Muhammed and his family for many years to come. He will need medical care for the rest of his life, including physical therapy and an attending nurse. His family’s needs are being met as well, including all costs for keeping his son and two daughters in school.

CDRS rescued little Hamid after he was injured in the bombing of Lal Shahbaz Qalandar Shrine in Sehwan on February 16. The boy, who is only three years old, sustained a head injury and lost his father and eleven family members in the attack. He was airlifted by Army helicopter and then brought into the hospital by our team for urgent medical care. Hamid underwent two surgical procedures to remove fragments of shrapnel from his head and is now doing well. Our team members were at the child's bedside around the clock to make sure that he got anything and everything he needed.

CDRS is doing its part and more, saving and serving people just like Muhammad and little Hamid every day. The support our donors is invaluable to our important and noble work. Their kindness enables us to assist more innocent and suffering people In Times of Need. Every little bit helps and matters to the families who need us to be there for them. Thanks in advance for your generous support! 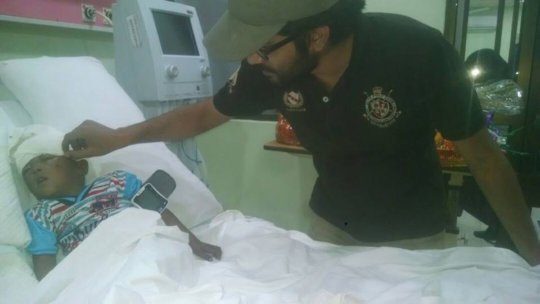 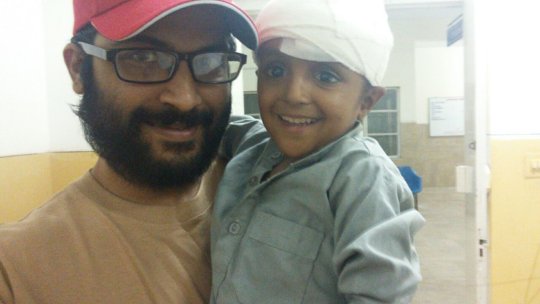 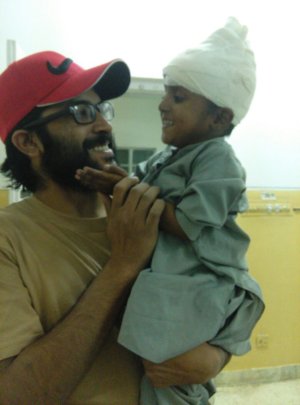 Hamid is looking forward to his own in a few years

By Justin Shea - Assistant to CEO 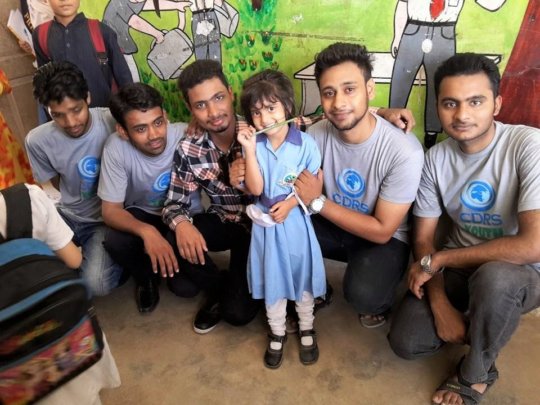 CDRS Youth volunteers conduct Each One Teach One

CDRS Youth is one of the initiatives most dear to all of us at CDRS because we believe that it is the coming generations who will determine the future of the country and world that they live in.  That is why we are very proud to tell all of our friends that there are now 16 CDRS Youth chapters serving communities in every region of Pakistan!

You have helped give hope to motivated youth leaders across the country with the desire to do their part. We cannot thank you enough.

Each CDRS Youth chapter is given semi-autonomy to decide how their members want to serve the community. CDRS offers suggestions and advice on how the group should approach certain tasks and promotes their achievements in their local communities and on social media. CDRS also assists with finding donors for certain efforts and CDRS Youth members often volunteer for CDRS disaster response, emergency relief missions and other humanitarian causes.

One program started by a CDRS Youth member is 'Each One Teach One.' The volunteers organize visits to schools in poor areas to conduct workshops and classes taught by university students and a special guest to speak on a unique profession. The workshops cover everything from computer lessons (beginner and expert levels) to how to protect oneself from disease to public speaking and building confidence. You can view a diagram made by one of our CDRS Youth members to explain each part of a computer and its accessories to grade school children and a slideshow video showing members teaching the children in attachments on this message.

CDRS Youth members are also working to install computer labs in any school that cannot afford the cost. The labs are being built with unwanted parts donated to CDRS Youth for this project. Our members collect the old and broken computers, phones, cameras, tablets and other donated electronic devices and restore them to working order before setting them up for academic use at an institution in need.

These are just a couple of the many community service efforts CDRS Youth is undertaking. Members are participating in ongoing projects such as cleaning up trash, promoting pollution awareness, planting trees, installing water tanks and pumps and much more. You can see everything they up to on our website www.cdrspakistan.org and our facebook pages for CDRS and CDRS Youth. We hope you are as excited as we are to see what the volunteers will come up with next! 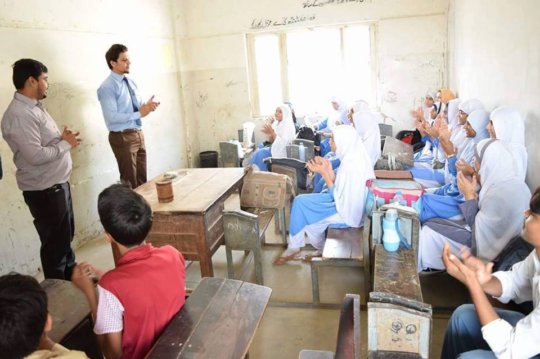 Each One Teach One workshop 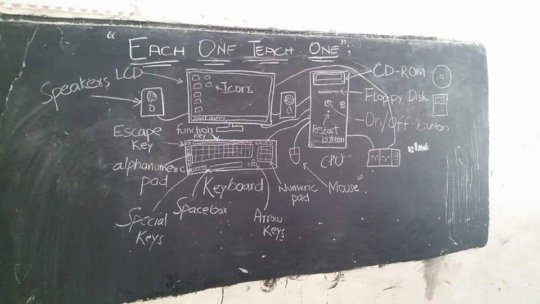