Make an Investment in Move For Hunger's Future 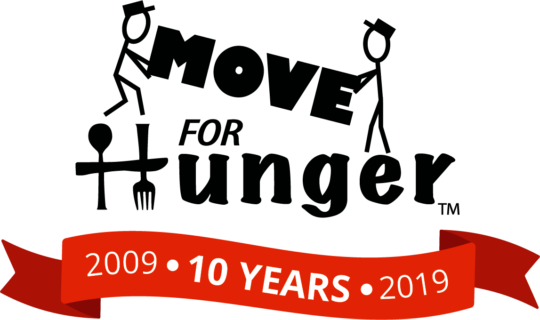 Move For Hunger officially turned 10 years on August 26...I can hardly believe I just typed that sentence! I have been on the road quite a bit over the past few months and the events I attended were a timely reminder of why I am still so passionate about this cause. On August 10, I was back in Michigan for the second annual Detroit Truck Pull, presented by Kroger. Last year, we raised an amazing $25,000 at the event, but Ben Cross of University Moving & Storage, Jill Partaka of V-Suite, and the rest of the Detroit Regional Relocation Council, were confident that they were going to top it in 2019. Back in 2009, I was pretty much alone in the conference room at my dad's office trying to figure out how I could convince other moving companies to buy into this idea we had. So, to be surrounded by the 200+ people who chose to spend a summer Saturday pulling a moving truck to support Move For Hunger was kind of surreal. We had a great time, raised awareness about hunger & food waste, and, true to their word, the planning committee raised more than $40,000, including a surprise $5,000 donation from Kroger on the day of the event!

After spending a few days back at home in New Jersey, I was off to Minneapolis to meet with the Minnesota Employee Relocation Council. It was exciting to meet some of our current partners face to face and introduce our programs to some new ones.My goal on this trip was to help large corporations based in Minneapolis see the value of encouraging their employees to donate their food when they move, while also highlighting the incredible network of moving, relocation, corporate housing, and real estate partners we currently work with. I hadn't been to Minneapolis in many years, and it was so rewarding to return and find so many people championing our cause. I was so encouraged to see that, even though Move For Hunger's network has expanded exponentially over the last decade, the potential for growth is still there.I still believe in the work Move For Hunger is doing because I can see the results. Together, we have provided more than 12.6 million meals to people facing hunger in the U.S. and Canada. Our network has already delivered 2.6 million lbs. of food this year, which matches our total from all of 2018. Despite all of the amazing things we have accomplished, I am convinced that our best work is yet to be done.But, ultimately, the only thing that matters is if YOU still believe in our mission. Move For Hunger can't continue to organize food drives, coordinate food rescues, or expand the network without your continued support. More than 40 million Americans rely on the assistance they receive from their local food bank or pantry. The food banks rely on the donations they receive from organizations like Move For Hunger. And we rely on people like you to keep us moving. You have been so generous in the past, and I hope we can count on you again to make an investment in our future. 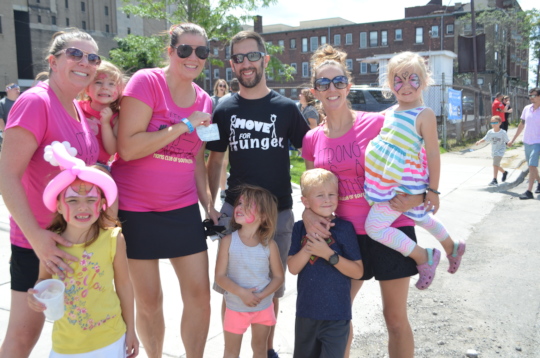 Pulling Together to Fight Hunger 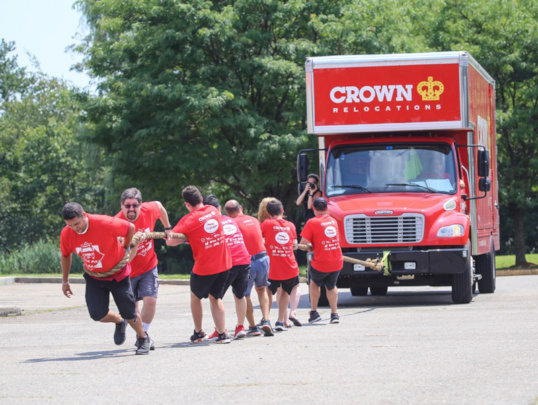 Truck Pulls have become Move For Hunger's signature fundraising event. They are exciting, fun, and a great way to raise awareness about hunger & food waste. What's not to love? Still, whenever I describe the Truck Pull to someone who's not familiar with the event, I always have to reassure them that it's not quite as difficult as it looks.Our friends at Crown Relocations failed to tell us that the truck we used for the Second Annual New Jersey Truck Pull was loaded with 8,000 lbs. of cargo...in 90 degree heat! Needless to say, the participants got a real workout last weekend.The event was once again hosted by our incredible partners at Crown Relocations. Each team had two attempts to see who could pull the truck 100 feet across the finish line in the shortest amount of time. The winners got to take home the coveted Truck Pull Championship trophies.Bob Leotti’s team blazed out of the gate with a blistering 0:38 run. With a full 18-second lead over the next closest team after round 1, the lead seemed insurmountable. The second Crown team, however, having learned from Bob’s bunch, adjusted their approach and managed to complete their second run in just 0:36 to take home the win!I led a team of Move For Hunger staff and interns, since the pull was here in New Jersey. Sadly, we couldn't get the truck to budge until some of the guys from Crown helped give us some momentum. If nothing else, this was yet another reminder that Crown Relocations is the extra muscle that Move For Hunger has counted on for the past 10 years.

The highlight of the day, for me, wasn't the competition, the music, or the postgame barbeque. It came during the opening remarks, when Bob Leotti  became visibly emotional as he was sharing some of the startling statistics about hunger in the United States. First, he reminded the audience that 40 million Americans are facing hunger each day. Then he talked about specific demographics, like how 1 in 4 veterans of the wars in Iraq and Afghanistan have experienced food insecurity. But it was when he mentioned that 1 in 6 children in the U.S. go to bed hungry each night, and pointed out the kids who were in attendance, one of whom was only a few weeks old, that Bob's voiced cracked. It was brief, but in that instant you could tell how important our cause was to him.

These numbers weren't news to Bob. Crown Relocations has supported Move For Hunger from the very beginning. These were statistics he's heard, read, or shared probably hundreds of times. It was clear, though, that Bob was thinking about the people beyond the talking points, and that's why that moment really resonated with me. Because even after a decade of fighting hunger, even though those numbers haven't declined as much as we would have liked, people like Bob and companies like Crown Relocations aren't discouraged...they're determined.

Move For Hunger will celebrate its 10th Anniversary on August 26, and although we’ve delivered more than 15 million lbs. of food over the last decade, there are still so many people who need our help. I hope I can count on you to host a food drive, hold a fundraiser, or make a donation to help us continue to pursue our vision of a world where no food goes to waste and everyone has enough to eat.

In addition to our 10th Anniversary, 2019 is also the Year of the Truck Pull! There's not much time to catch my breathe, because I will be heading to the Motor City next weekend for the 2nd annual Detroit Truck Pull, presented by Kroger. And, during Hunger Action Month in September, we'll also be holding Truck Pulls in Holmdel, NJ with Lowy's Moving Service, in West Branch, MI with Rob & Big's Moving Company, and Portland, OR with Chipman Relocation & Logistics. If you're in New Jersey, Michigan, or Oregon and want to register your team for one of these events, let me know! We'd love to see you out there!

Thank you again to everyone at Crown Relocations for helping us put together another great event and for the reminder that Move For Hunger's best work is yet to be done.-Adam

A Decade of Doing Good 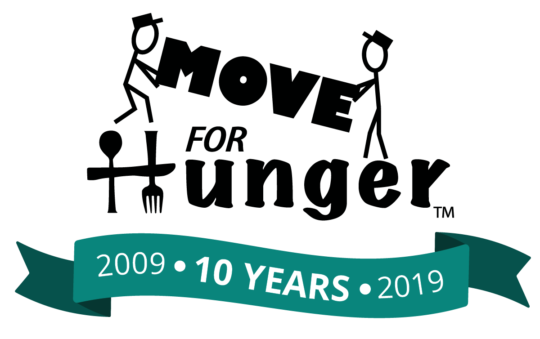 Move For Hunger is celebrating its 10th anniversary in 2019, and we thought this was the perfect opportunity to acknowledge the amazing things we have accomplished together, to reflect upon what we have learned over the last decade, and to set a course for the road ahead.

Our network has delivered nearly 14 million lbs. of food over the last 10 years -- that's the equivalent of 11.8 million meals! We can't discuss our successes, however, without acknowledging some hard truths. There are still more than 41 million Americans struggling to put meals on the table every day. Although food waste is now widely recognized as a global catastrophe, we are still throwing away 40% of the food we produce each year. I don't say this to discourage you, because we have made some very important strides on both fronts. But we need to do more, plain and simple.

When I started Move For Hunger, I never expected that it would become the nationally-recognized organization it is today. I also didn't fully understand the scope of the problems I was attempting to solve. If the last 10 years have taught me anything, though, it's this: we can't do it alone.

Move For Hunger is continuing to expand our efforts into the multi-family space this year, where we're now working with more than 900 apartment communities! These new partnerships help us educate and engage more people than ever before to tackle the issues of hunger and food waste. We're also working more closely with our food banking partners across the country, because it takes partnership and collaboration to truly drive impact.

We have a lot of exciting things planned for the rest of the year, including the Team Ten Challenge fundraising competition! Click here to receive updates on the Challenge, details on the AMAZING prizes (Hamilton tickets and a trip to Cabo, anyone?) that you'll have a chance to win, and to learn more about how you can help us reach our goal to feed 3 million people in 2019!

Our 10th anniversary shouldn't just be an occasion to celebrate everything we have accomplished. It's a chance for us to imagine what Move For Hunger can become. 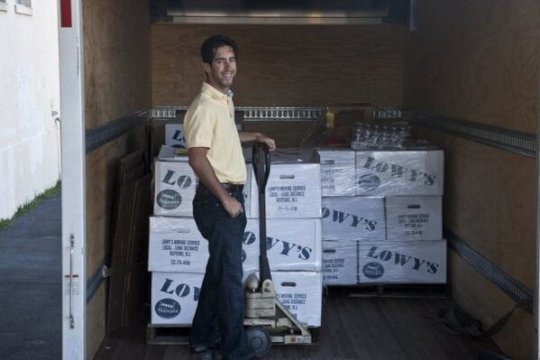 Move For Hunger's first-ever delivery in 2009