Meet Some of the Pets Your Donations Have Helped 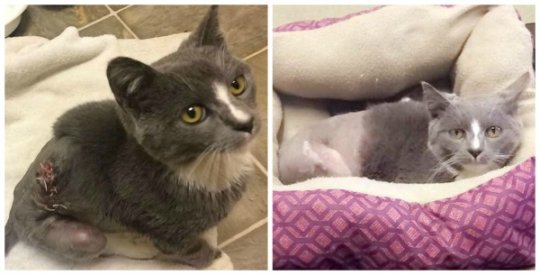 Thank you as always for your generous support of the Petfinder Foundation's Emergency Medical Fund! Here are just a few of the homeless pets whom your donations have helped save from terrible suffering:

Dreamer
The 7-year-old American Eskimo dog was found as a stray in Phoenix, Arizona, with a huge, open wound on his face. Taken in by American Eskimo Rescue St. Louis, Dreamer was diagnosed with soft-tissue sarcoma and, with help from our grant, underwent two surgeries to remove the tumor. Today, Dreamer is a healthy, happy, sweet boy who is ready to go to his forever home! Read his story or learn about adopting him.

Frankie
One cold Utah day, a sweet little grey-and-white kitten crawled under the hood of a car to keep warm. The car's owner had no idea the cat was there, and when he started the car, Frankie was severely injured by the engine. Thanks to our grant to Paws for Life Utah in Heber City, Frankie was treated for his badly torn skin and broken leg. He's still under veterinary care, but is loved by clinic staff and expected to make a full recovery. Read his story.

Chloe
This cuddly girl was found abandoned on a property where she had been on her own for two months. She was pregnant, starving and had terrible skin disease. Because of her poor condition, four of her puppies were stillborn and she had no milk to nurse the three who survived. Our grant enabled the Miss Gabriel Foundation of Rogue River, Oregon, to save all four dogs. Read their story or learn about adopting Chloe.

Duchess
Nine-month-old Duchess was bitten on the leg by another cat and developed a severe infection. X-rays showed it had settled into the bone and damaged the joint so badly that amputation was the only option. Our grant allowed The Cats' Cradle Organization in Morganton, N.C., to pay for Duchess's surgery, and today this friendly girl is recovering well and getting around just fine on three legs! Read her story.

Thank you for all that you do to help these and other homeless pets in need.

Chloe when she was rescued (left) and today

Duchess after her surgery (right) and her x-ray 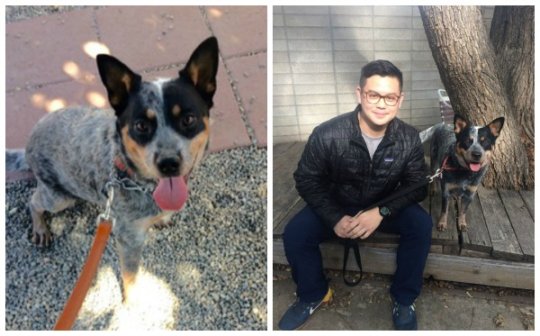 Cleo had never lived indoors and was aggressive.

We believe there's a home for every pet -- and our programs, which your donations support, are designed to help shelters and rescue groups find homes for even the hardest-to-place animals.

Cleo
A purebred heeler, Cleo was purchased as a puppy and, sadly, kept as an outside-only dog. By the time she was rescued by Friends of Orange County's Homeless Pets of Menifee, Calif., she was dog-aggressive and would bite when corrected. She also had no idea how to behave in a house. Our grant funded intensive training, during which she was fostered by her trainer and unlearned all her bad habits. Soon afterwards, she was adopted! Read her story.

Castro
When Castro's owner moved into an assisted-living facility, the pit bull found himself homeless at the ripe old age of 13. Our grant enabled The Fresca Fund of Fort Worth, Texas, to commit to paying for his lifetime medical care (including emergency surgery for bladder stones), and he was adopted by a graduate student who says, “He is such a grand old man and the best thing to happen to me.” Read his story.

Kitty Poppins
Pretty long-haired Kitty Poppins arrived at Prairie Paws Animal Shelter in Ottawa, Kansas, as a stray and was a bit of a loner and a wallflower. As a result, she was overlooked by adopters for more than 100 days. When our grant enabled the shelter to waive her adoption fee, she found a forever home, and with the money her adopters saved on the fee, they were able to buy her more pet supplies than originally budgeted for. Read her story.

Finnigan
After 9-year-old Finnigan was pulled from a city shelter by NorCal German Shorthaired Pointer Rescue of Menlo Park, Calif., he learned to love living indoors -- but months went by without any interest from adopters. Our grant helped the rescue market the spry senior better, and just in time for Christmas, he went to his new home. Now he gets to do all the things he loves the most: hiking, camping, car rides, and snuggling on the sofa. Read his story.

We love these happy endings, but hundreds of thousands of homeless pets are still awaiting theirs. Your donations help us help shelters and rescue groups do whatever it takes to find a home for every pet. Thank you for your support. 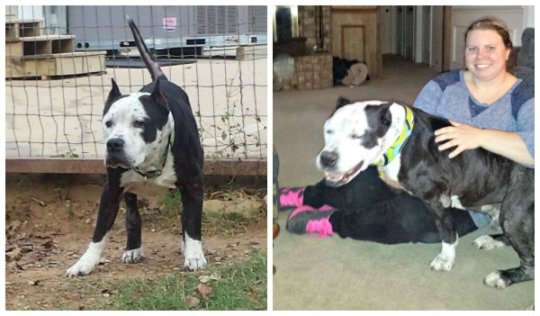 Castro found himself homeless at the age of 13. 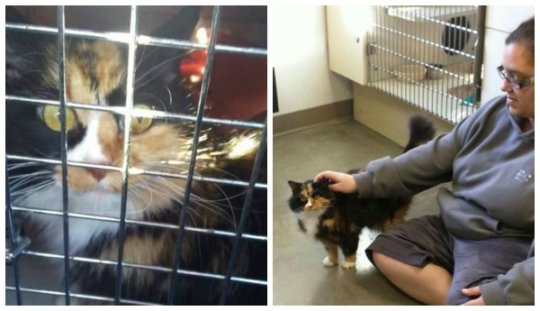 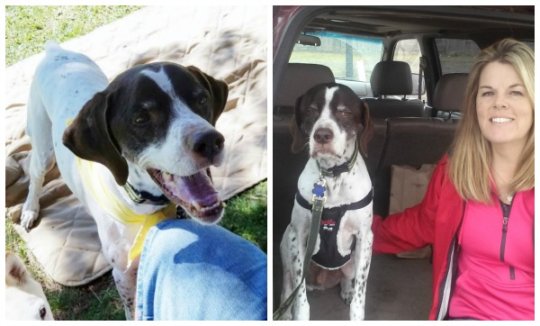 You Saved These Pets From Unimaginable Suffering 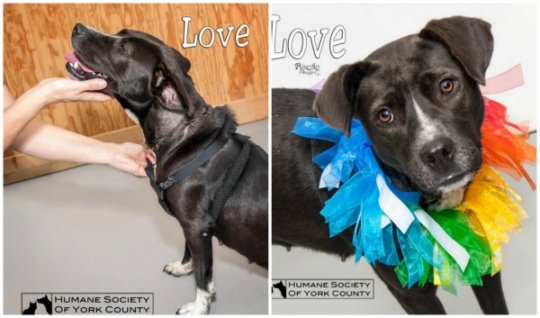 Love shortly after her surgery (left) and today

Thank you so much for your support of the Petfinder Foundation's Emergency Medical Fund. We use donations like yours to help sick, injured and abused homeless pets every day. Here are just a few you helped us save in recent weeks:

Love
This sweet 3-year-old female Labrador mix was brought to the Humane Society of York County in South Carolina with a severe laceration around her neck from a collar that had become so deeply embedded, it nearly slit her throat. Our grant enabled her to have the surgery that saved her life. This happy girl is still waiting for her forever home; you can meet her here.

Suzie Q
A good Samaritan found Suzie Q dragging herself from under a parked car. The friendly cat had been painted purple and shot in the spine. The bullet paralyzed her hind legs. She was taken in by Second Chance Sheridan Cat Rescue in Wyoming and given intensive veterinary care with help from our grant. She continues to improve every day and can now stand for several minutes using her hind legs.

Coco
Coco was rescued from a Chicago shelter where she was just hours from being put to sleep because she'd stopped eating and grown emaciated. Thanks to our grant to Mit Liebe German Shepherd Dog Rescue in Wisconsin, Coco was treated for pneumonia, kennel cough and other ailments. The lively 13-year-old girl has since gained weight and is thriving in her loving foster home.

Arabella
Arabella was seized from a man in Hayti, Missouri, by the Hayti Police Department when they found her in poor condition. She had been dragged behind a vehicle, her wounds left untreated and severely infected. She was malnourished, anemic, covered in fleas, and had open wounds on both back paws and her legs, some down to the bone. She could barely stand on her legs. Our grant helped Caruthersville Humane Society in Missouri get her treatment and place her in a loving forever home. 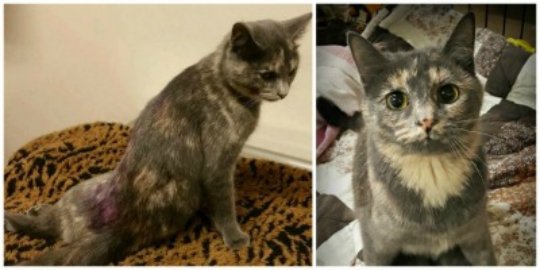 Suzie Q when she was found (left) and today 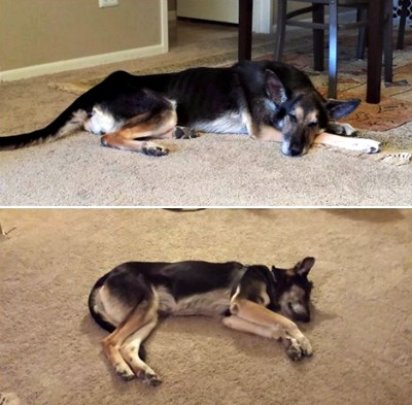 Coco when she was rescued (left) and today