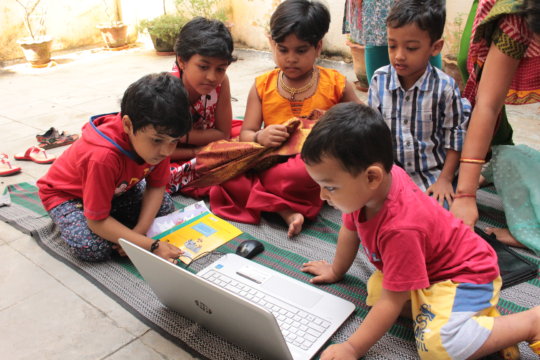 Dear friends and supporters of same-language subtitles for literacy,

Imagine looking for children’s books in an Indian village and not finding a single one. In rural India, it's all too common for children to have nothing at all to read. But since over 700 million Indians watch television and there are nearly 200 million smartphone users, no books no longer has to mean no opportunities for reading.

For 20 years, PlanetRead has been using the idea of same-language subtitles (SLS) on television for mass literacy, and if you've followed our work, you know that our research demonstrates that this regular, inescapable reading practice is helping people of all ages become better readers.

A few weeks ago, we learned that PlanetRead had won the Early Grade Reading Innovation Challenge (EGRIC) from READ Alliance and USAID. With their support and yours, we are expanding our SLS work to integrate AniBooks--animated digital stories with SLS--into the schools and lives of Hindi-speaking children in Grades 1-3, or ages 6-10.

Our sister company BookBox has been creating AniBooks to teach reading and language learning to children for some time, and we are in the process of identifying Hindi stories that will provide maximum benefit to the children in this program. We aim to deploy our content using Pico and other low-cost, low-energy projectors; computers already in the children's schools; mobile phones and smartphones, when those are available; and televisions already in homes in rural areas. As the program ramps up, we will be tracking the kids' reading progress through an app which will be accessible on mobile phones and tablets.

We are extremely excited about this new plan to leverage our SLS and technology experience to help children who are just beginning their education. READ Alliance and USAID are helping us bring the dream of full literacy for everyone in India a step closer to reality, and we are grateful to them and to you for continuing support!

We are excited to let you know that Oracle Giving has decided to support PlanetRead’s Same Language Subtitling (SLS) on national TV for the 2nd year!

Last year, with support from Oracle Giving and Zee Entertainment, we added SLS to Hindi songs of 52 movies. These songs were telecast on both Zee Cinema and Zee Classic. Having successfully completed the first year, in March 2016, PlanetRead submitted a proposal to Oracle Giving to continue SLS of the Hindi songs for another year. We were then informed in April that Oracle will continue supporting PlanetRead’s work for another year.

Same Language Subtitling (SLS) is simply the idea of subtitling mainstream TV content in the “same” language as the audio.  What you hear is what you read.  Several research studies have found that SLS causes automatic and inescapable reading engagement among the spectrum of early, weak and functional readers.  Especially on song-based content, film, folk and music videos, we now have strong evidence that SLS contributes to improved reading and language skills and even higher program ratings.

Zee Entertainment has been extremely supportive of PlanetRead’s SLS for literacy. In fact there was a press release where Mr Punit Goenka, MD and CEO, Zee Entertainment Enterprises Limited (ZEEL) spoke about the success of the SLS program and how Zee plans to extend this program to other channels as well. Click here to read the article.

We are in the process of identifying the most suitable programs for the second year and will be starting SLS work soon.

Checkout this photo stream on our Facebook page, which has snapshots of the songs we have subtitled.

The PlanetRead Story - documentary on literacy in India and impact of Same Language Subtitling. Watch on YouTube.

I am pleased to submit the following report on the Same Language Subtitling (SLS) project we carried out with the support of Oracle Giving.

We were invited by Oracle Giving to submit a proposal in February 2015 following which an application for subtitling 30 minutes of Bollywood songs every week for one year, was submitted. In April 2015, PlanetRead was selected as one of the grantees by Oracle.

By end of May 2015, PlanetRead completed the due diligence as required by Charities Aid Foundation by submitting all the required documents and information. We signed the MoU on 25th May 2015 following which we received the grant of $20,000 in the first week of June 2015.

From the month of April itself, we had started the ground work for identifying the right channel partner to telecast the songs with SLS. We approached Doordharshan and had several rounds of discussions and meetings in order to choose the program that we will work on. Unfortunately, Doordharshan was not able to provide us with a program for SLS.

In August 2015, we started subtitling the songs of popular Hindi movies for Zee TV and they have been telecast on both Zee Cinema and Zee Classic since 1st October 2015.

The aim of this Oracle supported project was to add SLS to songs of 52 movies that will be telecast over a period of one year. With Oracle’s support, we added SLS to all the songs in 52 Hindi movies (one movie per week). The average number of songs per movie is 5 to 6 and the length of each song is about 6 mins thereby giving 30 minutes reading practice. Weak readers benefit the most when there is an increase in quantity & frequency of SLS exposure. For example a weak reader who watches 3 hours of SLSed songs per week will benefit much more as compared to a weak reader who watches only 30 mins of SLSed songs per week.

As of date, we have subtitled all 52 movies and roughly half of those movies have been telecast on Zee TV. The songs we subtitle appear with credit to Oracle and CAF. View a sample clip.

Checkout this photo stream on our Facebook page, which has snapshots of the songs we have subtitled.

Here are links to other documentaries and work we have done:

The PlanetRead Story - documentary on literacy in India and impact of Same Language Subtitling. Watch on YouTube.