PlanetRead featured on Times of India

After we won the "International Prize" for literacy from Library of Congress, there have been quite a few articles about our work. We would like to share one of our favorites with this update. Here is an article that was recently featured on the Times of India:

US salutes use of Bollywood songs as literacy tool

WASHINGTON: Badmouthed for promoting tawdry kitsch and tell moves, Bollywood's song-and-dance routines — most recently endorsed by first lady Michelle Obama during the White House Diwali celebrations this week - has been recognized as a tool for learning by the US Library of Congress.

PlanetRead, an Indian non-profit born from IIM Ahmedabad, has been named winner of the Library of Congress' first international literacy award announced this week for its pioneering work in teaching millions to of semi-literate people to read using same language subtitling (SLS) for Indian movie songs. The award, which carries prize money of $ 50,000, supports organizations working to alleviate problems of illiteracy and aliteracy (a lack of interest in reading) both in the United States and worldwide.

The storied Library of Congress, repository of arguably world's largest knowledge base, described PlanetRead's SLS work in India is an innovative program that reinforces literacy skills, primarily through subtitles for popular musical television programming, based on solid research. "It is simple to implement and easy to replicate, reaching 200 million low-literacy TV viewers in India. SLS is notable as a highly motivational approach for getting low-literacy adults to read, particularly where access to books is difficult," the citation read.

PlanetRead wins "The International Prize" a literacy award from Library of Congress, USA

PlanetRead’s Same Language Subtitling (SLS) was announced as the winner of “The International Prize” on Sunday, September 22, 2013.  Librarian of Congress James H. Billington chose the winners of the 2013 Library of Congress Literacy Awards, a new program originated and sponsored by philanthropist David M. Rubenstein.

The Library of Congress Literacy Awards were announced in January 2013 as a program to help support organizations working to alleviate the problems of illiteracy and ‘aliteracy' (a lack of interest in reading) both in the United States and worldwide. The awards seek to reward those organizations that have been doing exemplary, innovative and easily replicable work over a sustained period of time and to encourage new groups, organizations and individuals to become involved.

"The generosity of David Rubenstein in instituting this literacy awards program will have a profound impact not just on the winners and their programs, but also on literacy programs everywhere that can benefit by replicating some of the best practices of those who applied for an award," said Billington. He noted that the Library is producing a publication that highlights the best practices in a number of categories as exemplified by the top applicants.

PlanetRead and the Indian Institute of Management, Ahmedabad, are championing the SLS innovation that uses TV to solve the problem of mass weak reading skills across India by implementing SLS on every Bollywood film song on TV, in 22 official languages.  They will further explore the possibility of implementing SLS in other countries in Africa and South Asia, or wherever reading skills are weak and music-videos are popular.

SLS is simply the idea of subtitling the lyrics of existing Bollywood film songs on TV, in the same language as they are sung in.  Essentially, it is Karaoke on popular film songs and music videos.  Reading skills are practiced, automatically, subconsciously, and inescapably, as an integral part of staple entertainment already consumed by 650 million TV viewers nationally. SLS is also known to improve program ratings by 10-15%.

PlanetRead and the Indian Institute of Management, Ahmedabad, have already implemented SLS nationwide, on 10 weekly TV programs of Doordarshan, India’s public service broadcaster.  One weekly program is broadcast in Hindi, Bengali, Gujarati, Marathi, Telugu, Tamil, Kannada, and Punjabi. A Hindi song is shown with the lyrics subtitled in Hindi, Tamil songs with Tamil subtitles, and so on. What you hear is what you read. The subtitles are designed to change the color of every word in perfect timing with the song, thus, providing automatic & subconscious reading practice.  SLS is also tremendously cost-effective.  On a Hindi program one US dollar gives reading practice to 5,000 people for one year.

Independently collected data by Nielsen’s ORG Center for Social Research, found that regular SLS exposure more than doubles the number of functional readers among primary school children. SLS has also become a major contributor to the growth of newspaper circulation.

A Narrative Report on the Baseline survey 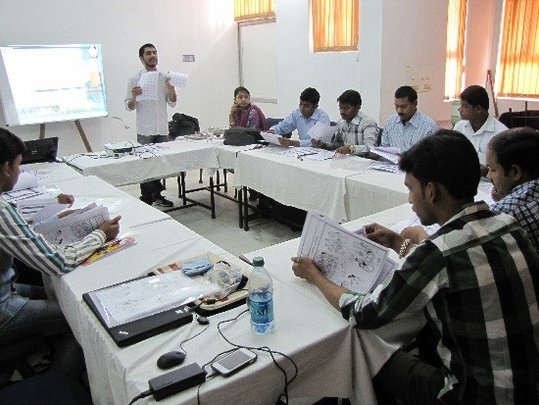 Report on Baseline survey conducted as part of the "All Children Reading" program:

In the third and fourth weeks of June, 2013, a baseline survey was conducted in the 4 Treatment Districts (TDs) and the 2 Control Districts (CDs). The month of May was devoted to the preparation of tools, pre-pilots in other districts in Maharashatra and Gujarat, and modification and finalization of the tools. The first couple of weeks of June was devoted to training of the Master trainers in Delhi and training of the surveyors at the district level. This report provides details about all the activities conducted for the survey.

Telecast of SLS was resumed in the month of July.

For the purpose of the survey, we supplemented ASER’s tools to fit the needs of our project. We had three tools (Appendix A):

-          Household survey: This consisted of most of the socio-economic indicators collected by ASER. We added a question on land, one on the occupation of the parents and a couple on their reading abilities.

-          Reading exercises: The first four exercises were designed to assess the reading ability of the child, specifically relating to character recognition. These were:

These four exercises had to be administered and coded to document whether the child could read or not. This was the mandatory section. Following that, three prose sections (with increasing levels of complexity) were to be administered based on the ability of the child to read. Only the first section was mandatory and the others were administered only if the previous one was read properly.

-          Media questionnaire: These consisted of questions both for the adult and the child that documented their TV viewing habits of both.

Survey methodology used by ASER for their Annual Status of Education Report has been adapted to fit the requirements of our project for this survey. We drew a sample of at least 480 children per district from 480 households across 30 randomly selected villages (see Appendix B for the list of villages in each district). These households are TV-owning households with children of ages 6 – 14, at least one of whom goes to a government school or is out of school.

The first step was to train the Master Trainers (MT), two from each of the districts, who would then go back to their districts and train the surveyors. This training consisted of three days:

Day one: An overview of the project and purpose of the survey was outlined by Lata (representative of Planetread). Following this the method of conducting the survey was explained by Ketan (ASER trainer and project manager). Details about what to do upon entering a village, how to divide the village into parts and how to select the households to ensure randomness was discussed. The training manual (Appendix C) was strictly followed. The participants got a chance to familiarize themselves with the tools, understand how each one had to be used and how the survey forms had to be filled. Examples were demonstrated by the trainers Ketan and x from ASER. Each MT was given a chance to fill out parts of the survey and administer the tools to their peers (a bit of role-play). At the end of the day there was a quiz to test the comprehension of the MTs.

Day two: The participants were taken to a large settlement in the outskirts of Delhi in order to pilot the tools and fill out the surveys. They divided themselves into groups of two and spread themselves out into different parts of the settlement. Each group could survey about 5 – 6 households. Both Ketan and Lata joined each group at different times to monitor progress and identify any flaws that needed correction.

Day three: This day was for regrouping and identifying any issues that needed immediate attention. The participants had a chance to present their findings and Ketan had a chance to check all the surveys to ensure that they were filled out properly. Following this, details about re-checking of the surveys was presented which would consist of desk checking, phone checking and field checking. Planning was done about the no. of days required in the field and a schedule prepared for each district.

Training at the district level:

The survey in each district was conducted by 20 people in groups of two making it 10 groups covering 3 villages each. Each group had three days to complete the survey in one village. Thus the survey was conducted in three phases of three days each. The MTs joined a group on each day of the first phase, thereby covering 6 groups between them. This allowed them to identify problems early on and resurvey if necessary. They did a combination of field work and desk checking of the already filled-in survey forms in the second week. The third week was spent by them in doing more of the same and some field re-surveys if necessary. 3-5 days following the three phases of survey was spent by the MTs in a thorough re-check of all the survey sheets and phone and field checks.

The sheets were then sent to ASER’s data entry location in Gadchiroli, Maharashtra.

Lata participated in the training and one day of field work in Wardha district of Maharashtra.

The results of the baseline are awaited. 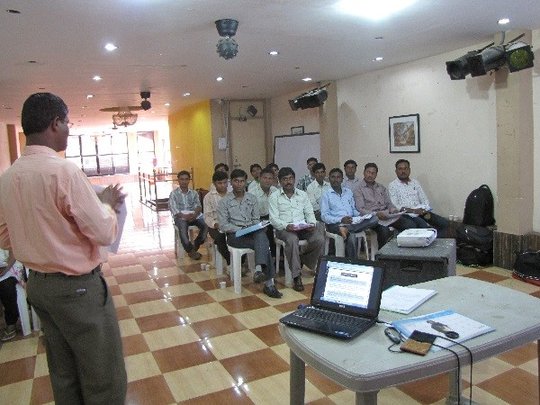 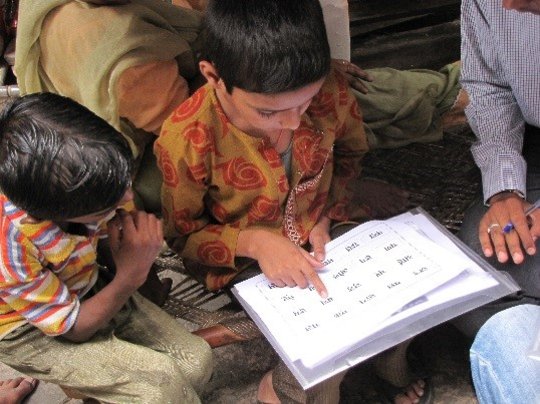 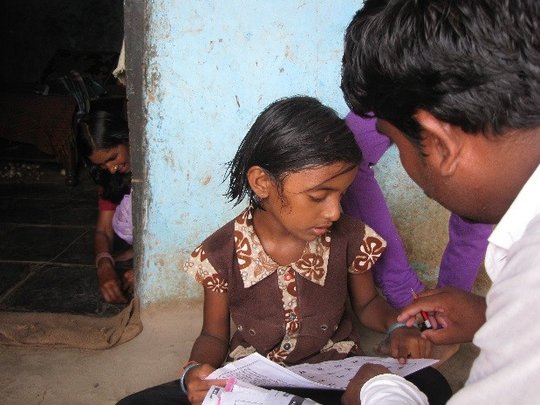