A life story from Yamuna- A child from this Project! Happy Christmas! 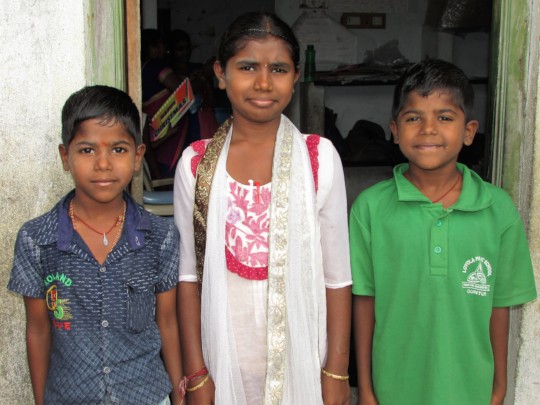 Yamuna and her brothers Ramiah & Lakshmaiah

We are sending our humble gratitude to you all for your kind continuous help to for the last 7 years to this project to care and educate slum children in Guntur, Andhra Pradesh, India

I am extremely happy to share one the successful life story of a girl from our school centre at Swarnabharathinagar, Guntur.

The story of Yamuna

My name is Yamuna, age 13 years studying 5th class in BASS Primary school at Swarnabharathinagar, Guntur.  I am born in 2005 at Hindupur village of Karnataka state.  In 2007 my father Mr. Raghavendra rao and my mother Mrs Gangamma with myself were migrated from Karnataka state to Guntur, Andhra Pradesh in search of employment and living in an occupied hut at Swaranabharathi nagar, Guntur. And my parents are attending into daily wage works in Guntur city and started income to care my family. In 2007 my mother gave birth to two twin boys’ names as Ramaiah and Lakshmaiah.  Both boys are healthy and fine. The needs of my family increased so my mother takes me to the works to add extra income to my family. Unfortunately I am not attended any school until 2013 as my age is 8 years old.

At this situation Mrs Silaja Teacher and other staff from BASS primary school finds me while working and motivated my parents and brings me to the school in June 2013. Thus my life turns from child labor to a successful school student. Now I am going to complete my primary education studies 5th class after April 2019 and promotes to high school. I am also very happy to share you that my twin brothers Ramaiah and Lakshamaiah are also admitted to this school from 2014. Now my brothers Ramaiah studying 4th class and Lakshmaiah studying 3rd classes in our loving BASS Primary schools centre.

Later my parents also improved their earnings by doing alternative jobs by collecting waste materials include paper, plastic and iron and reselling to get continues income even on daily wage works not available days.

This is my pleasure to thanks to all the supporters for our school through Global Giving. Like me more than 150 children getting care and education through this project. I myself and my twin brothers along with more than 150 children are so lucky to get care and education through this project. I request you all please continue your help to complete our education as well as to facilitate many other children in our slums. Once again thanks to all the teachers, staff and all the members of BASS for their love and compassion to educate infortunate children in the slums

This is one of the child stories from our school; like that many children had the successful stories with all your help.

Our slum community health centre is running well to facilitate first aid and timely treatment to the needy patients in the area.

In this quarter we received $622 from 1st August to 31st October 2018 from all your donations to this project. We are used for the grant to facilitate mid day meal to the children for September, October and November months.

I request you please kindly make a new donation either monthly recurring or one time donation during 2018 Yearend campaign to get bonus prizes. Please also make a donation to our new micro project to get lights in classrooms.

Donate micro project to give Lights to the classrooms 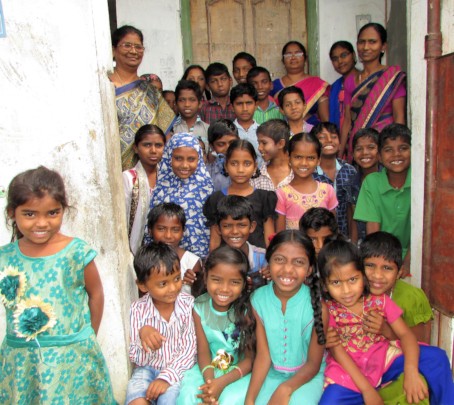 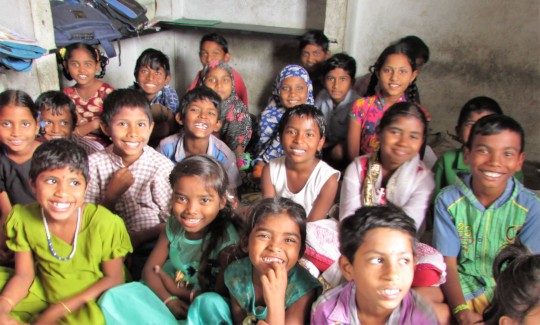 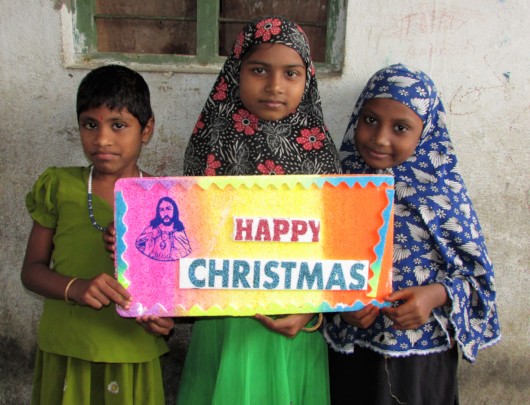 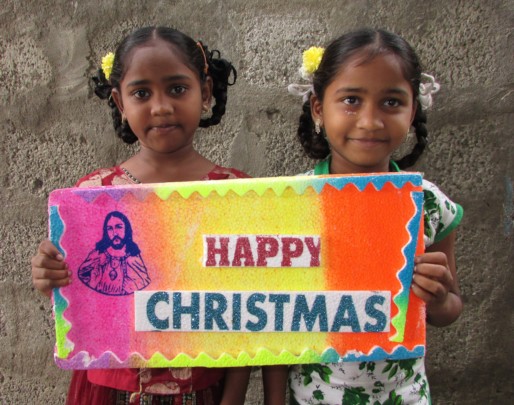 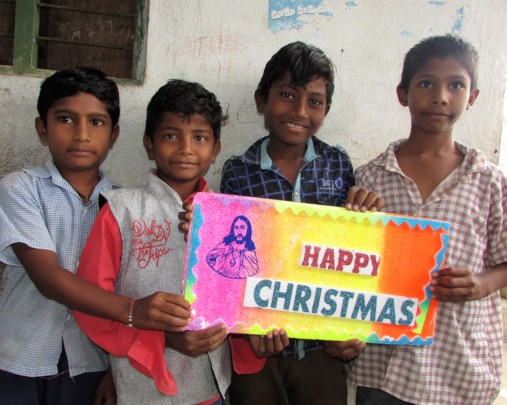 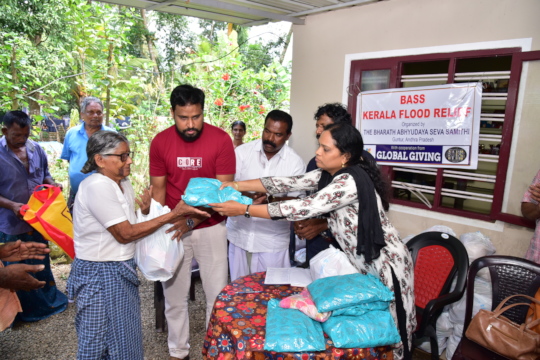 Many greetings and best wishes to you from BASS, India

Thank you so much for your kind timely donation help during the emergency situation for the flood victims in Kerala, India

Kerala Floods- Beginning on 15 August 2018, severe floods affected the south indian state of Kerala, due to unusually high rainfall during the monsoon  It was the worst flood in Kerala in nearly a century. Over 483 people died, and 15 are missing. About a million people were evacuated. All 14 district of the state were placed on red alert.  According to the Kerala government, one-sixth of the total population of Kerala had been directly affected by the floods and related incidents. It is the worst flood in Kerala after thegreat flod of 99  that took place in 1924. Thirty-five out of the fifty-four  dams in the keral state were opened for the first time in history. Heavy rains in caused severe landslides and have left the hilly districts isolated. Therefore thousands of the people were displaced and lost their belongings.

Our community based charity the Bharath Abhyudaya Seva Samithi (BASS) is always ready to help the needy people and especially at the emergency situations.  Therefore we have selected for the relief to the most affected villages of  Kumaragom and Pathanamitta situated in remote area where water canals exists and  water flows  always. The population is very poor and fishing as their first source of income.  More than 350 families living in these two villages and severely affected for the floods and most of the families rescued during flooding time. And they lost everything in the floods.

Therefore BASS organized emergency relief camps in these two villages from 1st to 3rd September 2018 and distributed a bag of raw food items to use for one week for a family and a set of cooking vessels of basic home appliances with a sari and lungi to 300 families.  The people are very thankful to BASS for the timely relief. The local leaders and also Bhodana – a local organization has been coordinated with us for effective distribution for the affected families. Executive Member Mrs. G. Prasanthi and our 10 local Volunteers include Mr. Jittu, Joseph, Babu, Kunju Mohan and Mr. Chandra Paul, Mr. Abraham Lincoln and myself Mr. Joseph Anthony  participated in the relief program

We received a special grant of US$3000 from GlobalGiving under disaster response program and also a total of US$ 922 from all your donations help for the emergency relief camp in time to distribute to 300 affected families.

We send our humble gratitude to all the supporters and lots of honor and many thanks to GlobalGiving for trust on us and giving us great opportunity with a grant to help 300 flood affected families in time.

At present the emergency situation is over and the government and many organizations involved in rebuild Kerala. Our organization relief operations also completed and looking forward to participate in the rehabilitation activities at least for 100 families in the coming days  with new hopes and resources.

Therefore I humbly requesting you to kindly help again and support the rehabilitation activities for the flood affected families in Kerala.

I also request you please kindly share and support our new small project with a donation to facilitate electricity and lights to a slum school.

Thanking you once again with gratitude 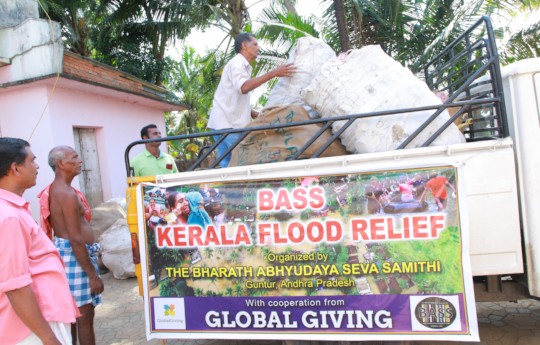 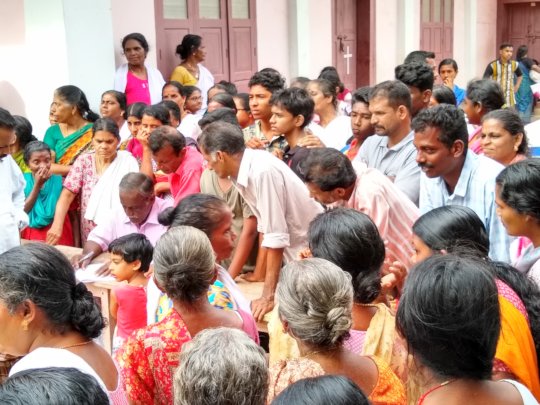 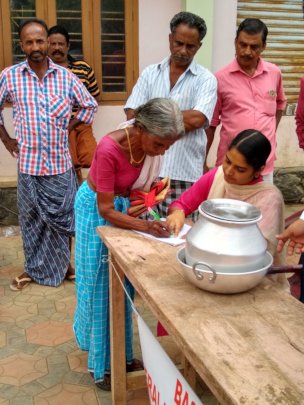 Every Family signed to get relief- 100% Literacy 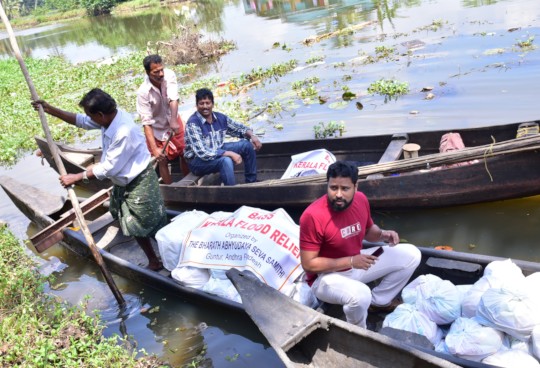 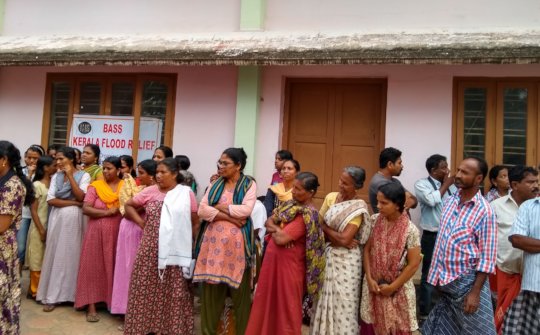 All families in Que to get relief 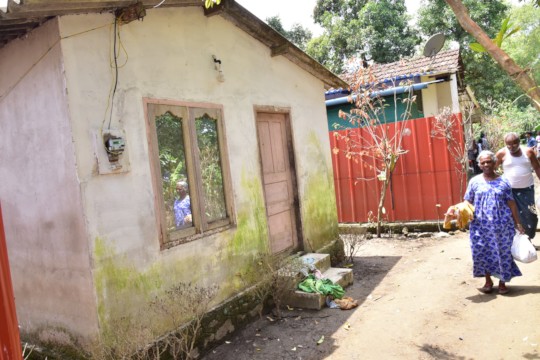 The walls of the affected houses- relief taken 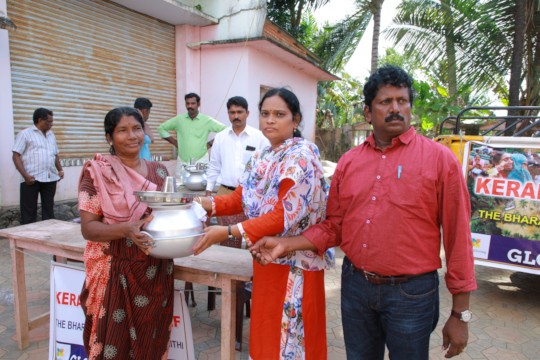 Many greetings and best wishes to you from BASS, India

Thank you very much for your kind for special work sites school for rescued and  identified child labor in the brick industries at Choutuppal Mandal, Yadadri District.

We are  succfully operated a special worksite school for all the identified child labour at in 11 Brick industries in Choutuppal, Yadadri District, Telanagana, India, We have facilitated primary education along with skills training program for 40 children who are came from Orissa state. All these children are identified as child labor in the brick kilns. The school program has been successfully completed by the end of June Month. And most of the migration families went back to their home state Odisha.

We get good cooperation from government  departments and the management of the brick industries for the successful implementation of the project. Officially the project has been closed from July and again we have to  start the worksite school from last week of December 2018 for new batch as the season starts gain.

We get US$  10 only from the last three months, we are very sad to inform yo that the need is big but we did not get good resources for this school project.

unfortunately the year by year number of children are increasing to coming to the  brick industries from Odissah state along with their parents to work in brick industries to get more and extra income within 6 months from December to June every year.

We face lot of trouble to get Odessa language teachers to teach the children in our school due to insufficient finances, we are based on the money received from you only to operate this special school

I once gain informing you that brick industries are continuously work in the areas but which are depending up on the weather. Again the new batch school will starts in December 2018

Therefore I humbly request you please kindly share and support the project to operate a works site school in the area.

Thank you so much for your continuous cooperation and support

‹ 1 ... 6 7 8 9 10 11 12 13 ... 22 ›
WARNING: Javascript is currently disabled or is not available in your browser. GlobalGiving makes extensive use of Javascript and will not function properly with Javascript disabled. Please enable Javascript and refresh this page.