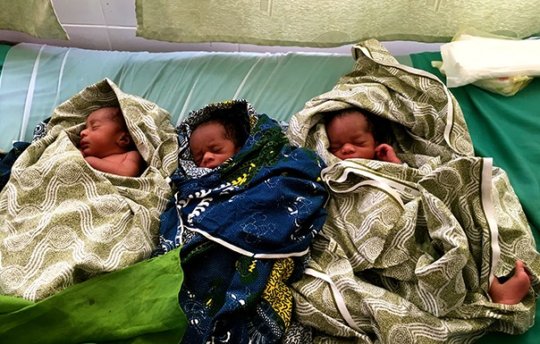 Above: The newborns rest at Partners In Health-supported J.J. Dossen Hospital in Liberia earlier this month.

Thank you for continuing to support Partners In Health and our work in Sierra Leone and Liberia to rebuild Ebola-ravaged health systems. You may have read exciting news about Ebola recently: scientists report having developed a highly effective and fast-acting vaccine against the disease, capable of halting and preventing outbreaks like the one that killed more than 11,000 people in West Africa in 2014.

Nonetheless, the legacy of the 2014 outbreak remains, and PIH's presence in Sierra Leone and Liberia is as critical as ever. Below is a recent report from J.J. Dossen Hospital in Liberia about the healthy birth of triplets, made possible with PIH's support.

"On a hot and humid Monday in early December, 28-year-old Elizabeth climbed the handful of stairs to her neighborhood health center in southern Liberia and nurses in the admitting area could tell, immediately, that this was no ordinary pregnancy. The petite woman’s belly was really big. Maybe she was carrying twins? Or maybe a disease such as hepatitis had enlarged her liver? Neither, it turned out. An ultrasound at J.J. Dossen, a PIH-supported hospital down the road, revealed that Sieh was 33 weeks pregnant with triplets.

Thanks to great strides made over the past year, the staff at J.J. Dossen helped Elizabeth deliver in much the same way as in the U.S., albeit with a little extra preparation and no battalion of experts on call.

While Elizabeth rested for four days, arrangements were made. An engineer hooked up the autoclave that sterilizes large batches of surgical instruments. The operations team bought gas for the newly installed generator, which was needed to run, among other things, the operating room’s air conditioner. (It wasn’t unheard of for a surgeon to suffer heat exhaustion in the 90-degree heat and leave the operating room in the middle of surgery to cool down.) The procurement team found appropriate sutures in the capital, and a charity group flew them to the hospital for free. Both of the adjoining operating rooms in the newly refurbished ward were prepped and 14 staff were enlisted—anesthesiologists, doctors, nurses, and three two-person teams, who would try to resuscitate the babies, if necessary.

On December 22, a smiling Sieh and her healthy little boys—named Ben, George, and Doboh, after clinicians in the delivery room—were discharged. PIH staff drove them home, stopping along the way at Sieh's neighborhood health center, where the midwifery staff got to see her, a belly lighter and three sons richer, and schedule follow-up visits."

Thank you as always for your generous support! 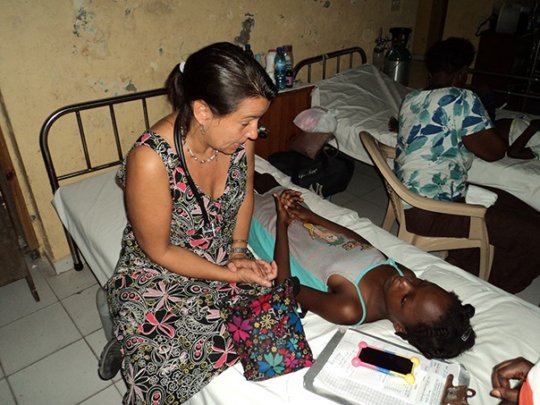 Thank you so much for your continued support of Partners In Health and our efforts to help Haiti recover from 2010's earthquake. This fall, Haiti was again devastated by natural disaster, when Hurricane Matthew, a Category 4 storm, hit the country's southern peninsula. We encourage you to read about how PIH is leading relief efforts, below:

"Dr. Joia Mukherjee has seen devastation in Haiti. She was there just days after the January 2010 earthquake that reduced Port-au-Prince neighborhoods to rubble, killed 300,000 people, injured 300,000 more, and displaced 1.5 million. Still, she says, each brick removed and surgery performed felt like a step forward.

But now, seeing the destruction left by Hurricane Matthew, she struggles to find words to describe the scene along Haiti’s southern claw, the region hit hardest by the Category 4 storm.

“I can honestly say this is one of the worst things I have ever seen,” says Mukherjee, Partners In Health’s chief medical officer.

What Mukherjee sees, she says, breaks her heart. Thousands of acres of peasant farmland destroyed, swept away by 145 mile-per-hour winds or damaged by gallons of saltwater that fell over a 24-hour period. Statuesque banana and mango trees snapped like matchsticks. Livestock disappeared. Many houses simply gone. Others stripped of their roofs. Clothes and household goods strewn about as if they’d been caught in a tornado.

And this is just the material damage. Mukherjee, her voice cracking, says she’s “waiting with a sense of dread that things actually will get much worse here.” Hundreds of people are using the same small, ill-equipped buildings, such as public schools, as emergency shelters. These places have inadequate water and sanitation and could quickly turn into fertile ground for deadly diarrheal diseases such as cholera. She thinks of the destroyed crops and empty storehouses and anticipates starvation. Water pools everywhere, creating potential breeding grounds for mosquitoes carrying diseases like malaria, Dengue, and Zika. And then there are the infections, such as tetanus, that come from untreated wounds sustained from flying debris during the hurricane.

Mukherjee says the 150-bed Hôpital Immaculée Conception will receive the typical PIH “package” of services. Patients will be fed. (They currently aren’t, unless family members bring them meals.) Care and medications will be free for those who need it most. Social workers and mental health staff will be on hand to provide support for patients and health care providers. And the roof will be repaired, electricity restored, and medical supplies stocked to meet increased demand."

Your generous support makes possible our efforts to help southern Haiti, as well as to continue providing quality medical care throughout the country in the wake of another disaster. From all uf us at PIH, thank you.

By the POSER Team - Malawi

Thank you for your cotnued support of Partners In Health and the Program on Social and Economic Rights (POSER) in Malawi. We're pleased to share this update from the field, provided by our POSER team:

"Konzeka is a soft-spoken fifteen-year-old sitting in a neatly kept blue school uniform. She has come to visit us after class today to discuss her experience with POSER's school support program and her academic accomplishments so far.

POSER has supported Konzeka through the past four years of her education. Throughout primary school, this took the form of pens, exercise books and school materials. When she passed the entrance exam to continue to secondary school, POSER paid the annual school and exam fees that can make secondary school education prohibitively expensive for vulnerable families like Kanzeka’s.

Despite being similarly committed to his education, Kanzeka’s oldest brother had his studies cut short by financial hardships at home. He had to take on odd jobs to support the family, including his younger brother who suffers from epilepsy and requires significant attention and care. Konseka credits the POSER program with keeping her and her younger sister in school. “Without the POSER program, there would not have been enough money at home for me to continue my studies,” Kanzeka said. “I would be at home doing nothing, or maybe doing odd jobs around the community. When a girl drops out of school, her future is not bright.”

But the future looks bright for both Kanzeka and her sister who aspire to become a nurse and a doctor respectively. Asked her favorite subject, Kanzeka enthusiastically lists four: English, Math, Physical Science and Geography. “I want to finish my studies in the next two years and continue to University,” she said. We ask her if she is one of the best students in her class. Her piercing light-brown eyes twinkle. She replies, humble but confident, “Don’t worry. I’m doing just fine.”

Thank you again for your generous support! Happy holidays!

‹ 1 ... 7 8 9 10 11 12 13 14 ... 34 ›
WARNING: Javascript is currently disabled or is not available in your browser. GlobalGiving makes extensive use of Javascript and will not function properly with Javascript disabled. Please enable Javascript and refresh this page.