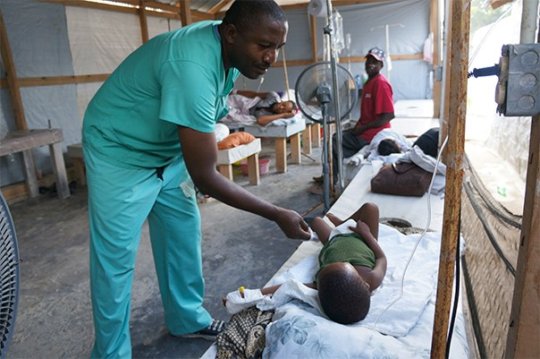 Patients are treated at the Cholera Treatment Center in Mirebalais, Haiti, on Nov. 8, 2012.

Thank you for your support of Partners In Health and our efforts to help Haiti continue rebuilding after the 2010 earthquake.

In the months after the earthquake, United Nations peacekeepers contaminated a crucial waterway with cholera, introducing to Haiti the disease that can trigger vomiting and diarrhea so severe it can kill in mere hours. Since 2010, 10,000 Haitians have died of cholera, and this year alone there have been 26,000 reported cases.

The U.N. recently accepted responsibility for bringing cholera to Haiti, and in response Partners In Health sent a petition to the U.S. Ambassador to the United Nations urging the organization to support cholera treatment and prevention efforts. You can read the petition here.

Thank you for your generous support that makes our work possible.

Thank you for your continued support of Partners In Health's efforts to rebuild the health systems in Sierra Leona and Liberia that were destroyed by Ebola.

We're pleased to share with you an article from the Thomson Reuters Foundation that highlights the necessity of strengthening West Africa's health systems. An excerpt is below, along with a link to the full article:

"Rushing from one pregnant woman to another in the antenatal ward of Sierra Leone's main maternity hospital, Josephine, a midwifery student, is all too aware of the danger facing the dozens of expecting mothers under her care.

These women are preparing to give birth in a country estimated to have the world's highest rate of maternal deaths. More than one in 100 women in the West African nation die during childbirth, according to the World Health Organization (WHO).

"My niece died during childbirth a few years ago," Josephine, 34, said during a break at the Princess Christian Maternity Hospital (PCMH) in the capital of Freetown.

"I wasn't there to assist her, to save her," she said, sweat dripping down her faded lilac scrubs. "Pregnant women must come to hospital regularly so that they can get the help they need."

Despite a chronic lack of doctors, nurses and midwives and a tradition of giving birth at home, maternal deaths were on the decline in Sierra Leone until 2013 - having halved since 1990.

Then Ebola struck. The world's worst outbreak of the virus ravaged the country's fragile health system, killed a tenth of its doctors and scared people away from health centres.

The government and the United Nations say they have learnt lessons from the Ebola epidemic, which sparked a fresh drive to improve the health system - on which less than 10 percent of the state budget is spent - and reduce maternal deaths.

"Ebola was a necessary evil,"a midwife adviser for the U.N. Population Fund (UNFPA) told the Thomson Reuters Foundation. "It was an eye-opener which showed the issues facing our health system. Now we must tackle them."

Partners In Health is committed to alleviating the health crises that continue to plague West Africa in the wake of the Ebola epidemic. We thank you for your generous support - we could not do this work without you.

By the POSER Team - Malawi

Thank you so much for supporting Partners In Health and the Program on Social and Economic Rights (POSER) in Malawi. We're pleased to share this update from the field, provided by our POSER team:

"Before we can thank Yamikani for taking the time to visit us after school, he has already thanked us for the support the POSER program has provided to him and his family.

Yamikani, who is 20, has been raised for the past eighteen years by a single mom. His father abandoned the family eighteen years ago, leaving his mother with only a small plot of corn and tomatoes and sporadic odd jobs to feed him and his three younger siblings.

Despite this challenging financial situation at home, Yamikani completed primary school. When it came time to proceed to secondary school, Yamikani began receiving financial support from the POSER school program. POSER has paid Yamikani’s annual tuition and exam fees for the past three years, alleviating the financial burden of education on his household and making it possible for him to continue his studies.

As for Yamikani, he enjoys studying math, physical sciences and biology, and hopes to pass the exam to enter University later this year. “I want to become a doctor,” he said, explaining how he has admired the work of doctors in his home district of Neno where PIH operates. “There are so many people here who are so vulnerable. My relatives. My friends. They are all being cared for by these doctors, and I would like to one day be able to provide this care as well.”

Thank you again for your generous support!

‹ 1 ... 8 9 10 11 12 13 14 15 ... 34 ›
WARNING: Javascript is currently disabled or is not available in your browser. GlobalGiving makes extensive use of Javascript and will not function properly with Javascript disabled. Please enable Javascript and refresh this page.