Pregnant and Afraid in Rural Kenya 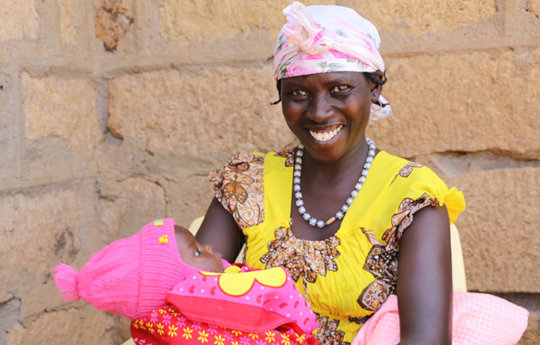 Lena with her newborn son

Lena was in the final days of her pregnancy when violence struck her community in rural Kenya. Cattle rustlers attacked her village, setting her home on fire.

“The only thing I managed to grab before dashing out of the hut was my bag, which had my personal items,” said Lena.

The contents of that bag, which were supplied by UNFPA, ended up saving Lena’s life.

Around the world, UNFPA provides women like Lena with clean delivery kits, which contain all the essential items for a safe delivery.

The kits contain essential items necessary for a safe birth, including sterile gloves, a blanket, a plastic sheet, and soap. For only $11 you can help UNFPA provide three emergency clean delivery kits to women without access to maternal health services.

Lena was separated from her family and had to hide in the bushes. “I was alone and afraid,” she said. And while she was hiding, she went into labor.

“I remember crying at the top of my voice,” she said. “I was sure I was going to die, unless I got help.”

Thankfully, a neighbor heard Lena’s cries for help. Because of UNFPA’s clean delivery kit, the neighbor was able to help her give birth safely.

A donation of only $25 can provide one woman in a humanitarian or rural setting with a dignity kit that offers flashlights and hygiene essentials, ensuring that she can maintain her dignity, health, and security in emergency situations.

In Kenya alone, UNFPA is hard at work ensuring that every woman can give birth safely. Within the last year, UNFPA provided 22,000 women in the country with lifesaving reproductive health services.

But there is so much more work to be done. With 830 women dying every day from unsafe pregnancy and childbirth, more than 500 of those deaths occur in emergency situations like Lena’s.

Can you make a donation today and help support UNFPA’s work making every child birth safe? 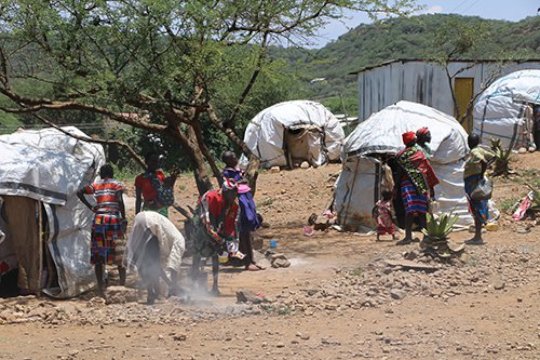 A displacement camp in Chemolingot, Kenya 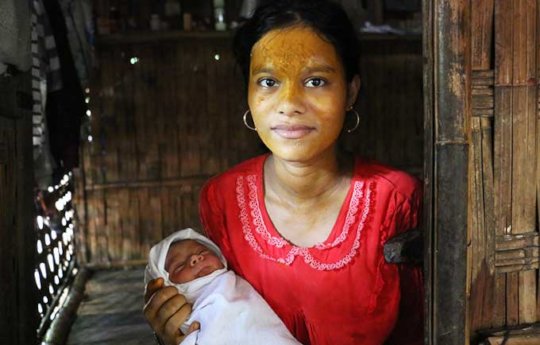 Phu Tu Nee is 19 years old and pregnant in Myanmar’s Rakhine State. She is one of the estimated 300,000 “forgotten” Rohingya who remain confined to camps and villages in Myanmar. The Rohingya are subject to violence, religious persecution, and ethnic genocide. In turn, over 700,000 Rohingya have fled to Bangladesh. However, restrictions prohibit Phu Tu Nee from leaving her home country; as a result, she has limited access to primary health care since her camp lacks professionally trained midwives and health facilities.

Thankfully, UNFPA services such as mobile clinics are available. As a result, Phu Tu Nee was able to receive weekly prenatal care throughout her pregnancy at a UNFPA-supported mobile health clinic.

On the eve of her birth, a tropical storm hit Myanmar. Nevertheless, Phu Tu Nee delivered her first baby with ease, since she was given a UNFPA clean delivery kit that ensured a safer delivery.

UNFPA’s clean delivery kits contain essential items necessary for a safe birth, including sterile gloves, a blanket, a plastic sheet, and soap. For only $11 you can help UNFPA provide three emergency clean delivery kits to women without access to maternal health services.

The day after Phu Tu Nee gave birth the weather cleared, and she was able to rest with her newborn baby. In the aftermath of her birth, all her concerns and questions were answered by UNFPA health volunteers, who provided her with advice and information on post-partum care. On a day-to-day basis, these volunteers check on community members to make sure they are utilizing all UNFPA resources.

None of this would have been possible without the work of UNFPA.

UNFPA also offers Dignity Kits, which contain vital items such as menstrual pads, bath soap, underwear, and other necessities to uphold the health and dignity of women and girls.

A donation of only $25 can provide one woman in a humanitarian setting such as the Rohingya refugee crisis with a dignity kit that offers flashlights and hygiene essentials, ensuring that she can maintain her dignity, health, and security in emergency situations. 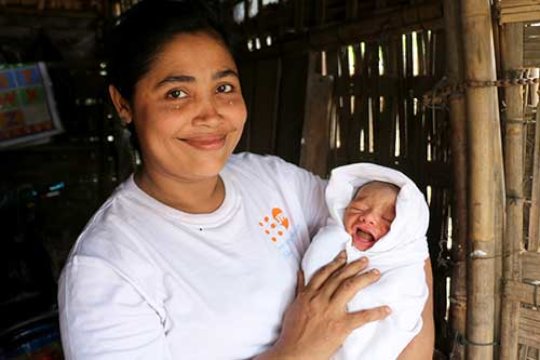 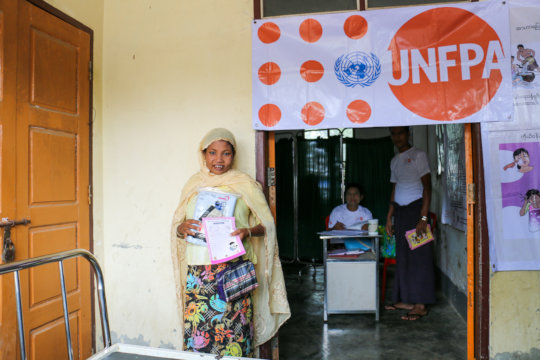 By Friends of UNFPA - The United Nations reproductive rights agency 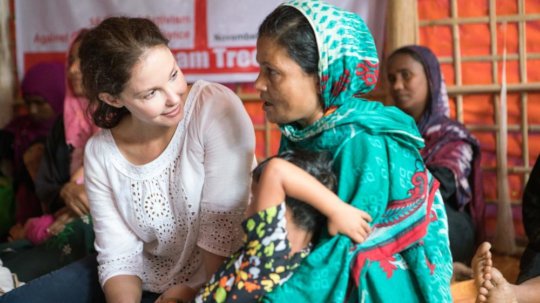 “So often we don’t think of pregnant women in crises. We somehow think life freezes. But [Rohingya] women were pregnant before they fled Myanmar, women get pregnant by their husbands and by men who rape them. Childbirth stops for nothing” – Ashley Judd, Actress and UNFPA Goodwill Ambassador.

Over the last six months, more than 700,000 Rohingya refugees have fled from Myanmar to Bangladesh. Cox’s Bazar refugee camp in Bangladesh hosts the majority of these refugees. Earlier this year, actress and UNFPA Goodwill Ambassador Ashley Judd visited Cox’s Bazar and met with many of the women living there. At that time, 34,000 of the newly arrived refugees were pregnant.

In her diaries, she writes about her visits to UNFPA-supported women friendly spaces and clinics that support maternal care. In one camp, the midwives have screened more than 170,000 women since August of last year—both refugees and women from the host communities—for pregnancy and medical needs.

With monsoon rains unleashing floods and landslides in Bangladesh, UNFPA and partner agencies are urgently working to secure Rohingya refugee camps and settlements in Cox’s Bazar district. Over 29,000 people have already been affected by the rains. Dozens have been injured, and at least one person has been killed.

“The safety of the Rohingya refugees during this monsoon season is priority one,” said UN Secretary-General Antonio Guterres after visiting refugee services, including UNFPA facilities, amid a downpour.

“As many as 200,000 need to be relocated. We cannot allow the monsoons to wash away the hopes of the Rohingya refugees I met today.”

As the rains intensify, UNFPA is working with partners mitigate monsoon-related risks and to reinforce health centers and safe spaces.

At the Balukhali health center, the wait for maternal care is jaw-dropping. It splits in three directions.

Among the total and growing refugee population, some 40,000 women have received prenatal care and more than 1,500 babies have been born at UNFPA-supported facilities.

But still, 78% of refugee births take place outside of any health facility. To help, UNFPA has distributed over 12,000 clean delivery kits, encouraging mother to take them to any health facility when labor begins.  During the recent rains, UNFPA’s health facilities and women-friendly spaces saw a decline of more than 60 percent in service use.

UNFPA’s clean delivery kits contains the basic items necessary for a safe birth, including a sanitary mat for child birth, sterile gloves, a bar of soap, a razor, a clamp for the umbilical cord and a suction bulb to clear the newborn’s airway.

As Ashley Judd explains to CNN, “it literally makes the difference between life and death for both mother and newborn.”

For only $15 you can help UNFPA provide 3 emergency clean delivery kits to women without access to maternal health services. 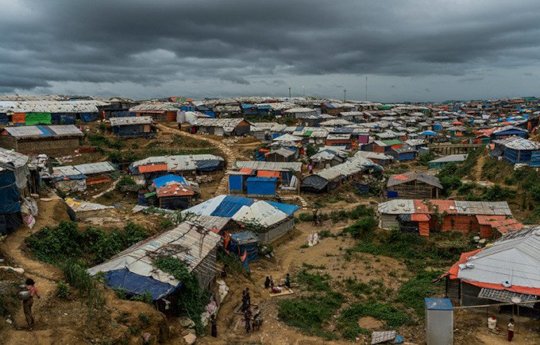 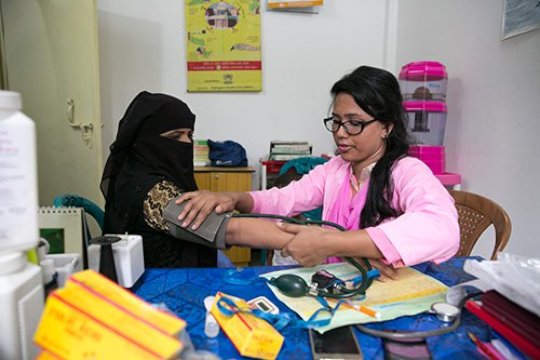 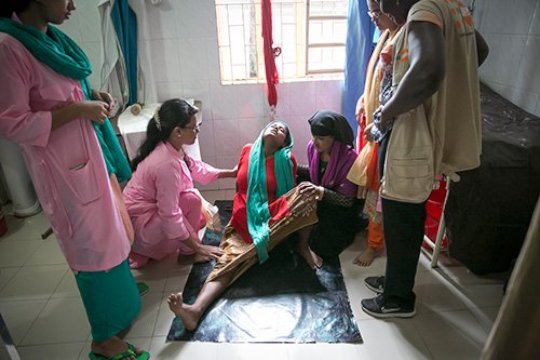