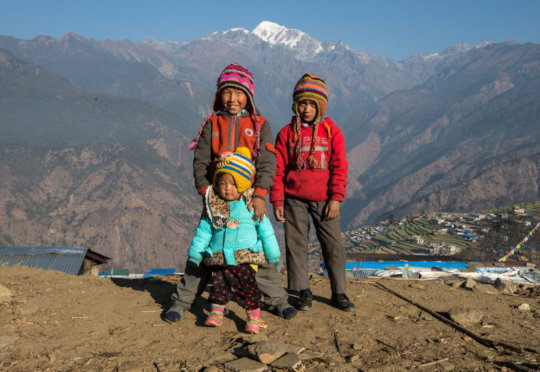 Thank you for your support of UNICEF’s efforts after the 2015 earthquakes in Nepal. The devastation and loss of life impacted so many families, parents and children across the region. Thanks to the generosity of supporters like you, UNICEF was able to responded to critical health needs and restore essential health services in affected districts.

In emergencies, UNICEF is there before, during and after a crisis. Building on its over 50-year presence in Nepal and a strong relationship with the government and people, UNICEF has been well positioned to continue to support those in need over the long term. In the area of WASH, UNICEF has been working with partners to provide earthquake-affected communities with tools and training to plan and manage their water and sanitation systems, including ensuring proper WASH services in 500 heath facilities and at least 300 schools, as well as longer-term sanitation support, including hygiene promotion. In education, UNICEF provided semi-permanent classrooms, trained teachers, and distributed education supplies to areas with the greatest need. UNICEF has also been supporting the Government of Nepal to develop policies and strategies for disaster risk reduction and school safety for inclusion in the new education sector plan. An example are the  fully equipped earthquake-resistant prefabricated health facilities in nine earthquake-affected districts, to strengthen the health sector and train staff to provide quality maternal, newborn, child, and adolescent health services. UNICEF supported immunization campaigns, the installation of disaster-resilient cold chain systems and the improvement of the supply chain of vaccines at district level. Lastly, UNICEF has been focusing on strengthening  the child protection systems at the district and national level with local partners.

None of this essential work would be possible without partners like you. On behalf of the children of Nepal, thank you for your support.

On behalf of the children impacted in Nepal, thank you! 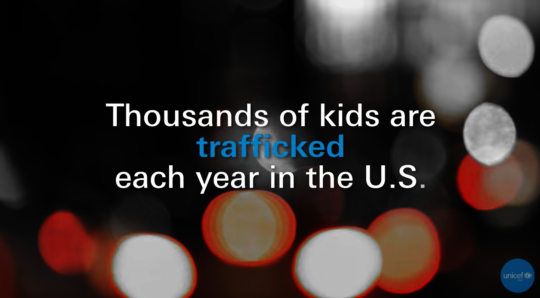 Worldwide, approximately 10 million children are currently subjected to modern slavery – an umbrella term that encompasses forms of child trafficking, forced labor, child marriage, and sexual exploitation. This type of exploitation not only deprives children of their basic human rights, but also often exposes them to violence and abuse.

Luckily, organizations such as UNICEF are working around the globe to address this issue by helping strengthen child protection systems and empowering individuals to confront the harmful social norms that may make a child vulnerable to trafficking in the first place.

A lot of work goes into making the chocolate that we eat. Cocoa – grown in certain areas along the equator – can be a very labor-intensive plant to grow and harvest. In countries such as Côte d’Ivoire, child labor and child trafficking have become an issue on cocoa farms; however, community members in Koffikro decided to turn the tables by educating others on the importance of placing children in school and providing assistance with school fees when necessary. Additionally, local cocoa farmers worked together to find ways to make farming efficient without having to rely on child labor. This is just one example of a global UNICEF program that is working towards a day where no child has to experience exploitation or violence.

Human trafficking does not just occur on cocoa farms or in far off countries. Every year, trafficking is reported in all 50 U.S. states, and it can take many forms ranging from migrant farming and factory work to commercial sexual exploitation.

One mother, Jamie shared the story with UNICEF USA of how her daughter, Danielle, was trafficked. As a freshman at college, Danielle met a man who presented himself as being sincere and interested in learning more about her. This man eventually became Danielle’s pimp, forcing her to work eighteen hour days and repeatedly subjecting her to violence:

Danielle was eventually able to leave her situation and is now an anti-trafficking advocate. Her story represents what many children in the U.S. experience every day. Those who are homeless are especially at risk of being trafficked with the National Center for Missing and Exploited Children reporting in 2017 that one of every seven endangered runaway youth directed to the organization had likely been sex trafficked.

Child trafficking is both complicated and widespread, but there are things we can do to bring these injustices to an end. UNICEF USA’s End Trafficking Project works to educate Americans about what child trafficking is so that we can all take steps to stop the cycle of exploitation.

The End Trafficking Project supports the work of amazing organizations that stand by survivors in advocating for crucial legislation, such as the Stop Enabling Sex Traffickers Act of 2017. You can support our work right here on GlobalGiving or get involved directly by visiting our Resources page for educational tools and activity guides. Together, an exploitation-free future is possible. 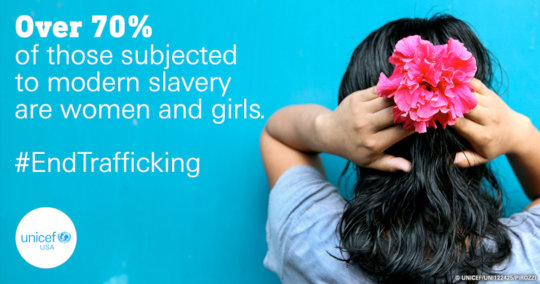 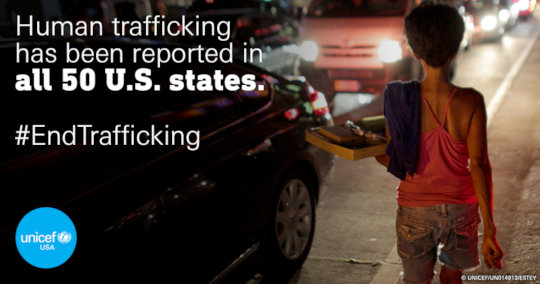 January – which is National Human Trafficking Awareness Month – has been a busy month for the End Trafficking Project. Our UNICEF USA constituents have been working hard to raise awareness in their communities, from hosting meetings with local Congressional representatives and planning film screenings, to participating in our social media campaign and hosting educational meetings with UNICEF clubs. It is truly exciting to see concerned individuals around the country getting active to end trafficking.

In addition to a new podcast episode highlighting ways students can get engaged, we are excited to have released a series of new resources, including an End Trafficking Events Toolkit. The Toolkit gives lots of examples of events and activities that individuals can do to educate their communities about child trafficking. Though it is designed for college students, many of the activities and action steps are perfect for anyone who is passionate about getting involved. You can also check out our new blog posts to help get you started:

Thank you for supporting the End Trafficking Project!

‹ 1 ... 24 25 26 27 28 29 30 31 ... 35 ›
WARNING: Javascript is currently disabled or is not available in your browser. GlobalGiving makes extensive use of Javascript and will not function properly with Javascript disabled. Please enable Javascript and refresh this page.