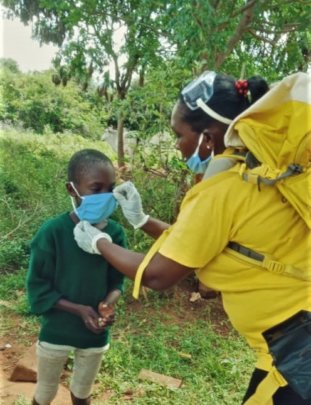 CHAT CORP helping a child put on a mask

* not their real names

As the year started, *Mwanzia could not help but worry about his four children. Kamuongo, his village with a fast increasing population, is a growing centre of business. According to the government, it was now time for children to go back to school after the long break. He kept on wondering how the children would keep safe from contacting C-19 considering the classrooms were crowded.

As he was seated outside his home, CHAT CORP partner, Susan Nzakye approached him. She wondered why the man looked worried while everyone else was happy about starting a new year. Susan decided to talk to him and find out what the issue was. Mwanzia explained his children were going back to school and that meant school fees for all of them. Having had a rough year in his small retail shop business in 2020, money was tight. He had to get the children some new school uniforms since a yearlong growth spurt meant they could not fit into the old ones. Besides, the children had to have face masks and they also had to sort out the handwashing situation at school.

Susan, being prepared, told him not to worry. She had some masks in her backpack which she gave him for each of his children. She also told him of how she was supposed to be going to the school for the first week to help sensitize the teachers as well as the pupils. She told him of the government's temporary solution of separating the classes with some children taking their classes from outside and others remaining in class thus ensuring that the children can maintain social distancing. She told him of the various handwashing stations that had been set around the school to help with the handwashing at any time and of course, they had soap for this.

Mwanzia was happy to know that measures were being taken by the school. He was now sure his children were going to be safer from contracting C-19. He could not help but wonder how other children whose parents could not afford to buy them masks, what they would do and she told him not to worry, she had foreseen the problem and had some other C19 prevention kit that she would distribute within the school and good thing her church women’s group had offered to sew some for the less fortunate!

"I now agree with the cabinet secretary for health that fighting C-19 is a social responsibility. How you have thought of the children shows that if we all did the same for our neighbours we would easily beat corona!" Mwanzia was happy. His day seemed to be getting better. He invited Susan to sit with him for a cup of tea as his wife came to join them. Susan sensitized them on various methods of family planning to ensure that they do not have a family larger than they could manage and by the time she was leaving their home she was with his wife on their way to the dispensary for a five-year contraception protection implant.

"When we wear a mask, you'll be saving a life. That life could be your own, or someone who means a lot to you" Ron Baratono 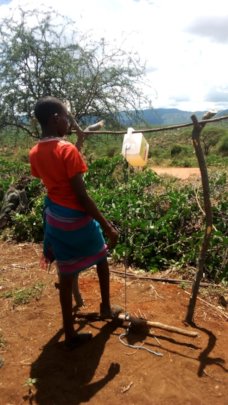 A youth using a handwashing station set up by CORP 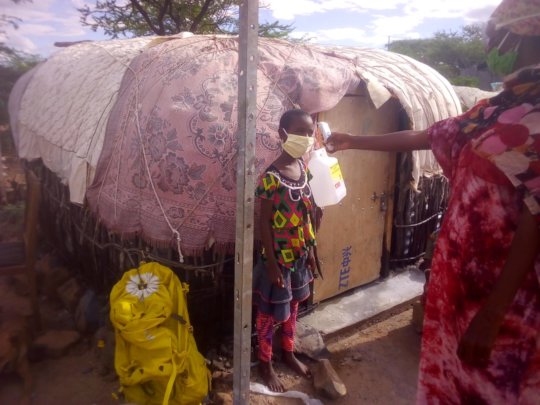 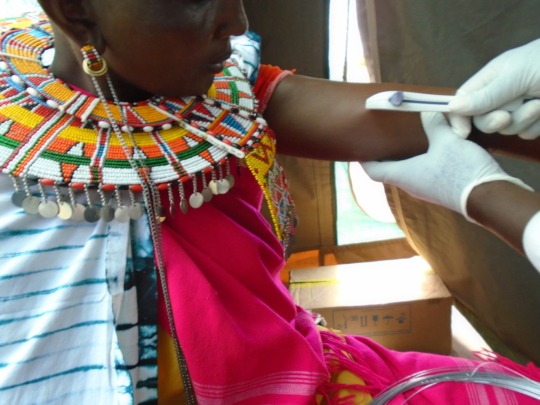 CHAT Nurse providing a 3- year implant to a lady

As they bid the community goodbye after 7 days of sensitizing them with family planning information, Rose, CHAT’s FPCORP, could not hide her joy due to the significant effect they were making especially in the lives of the young school-going girls. Just as she was about to enter the car and start their journey back, she noted a middle-aged woman who was shouting her name from a distance.

Despite that the team, with the locum nurse, was somehow in a hurry to return, Rose couldn’t afford to ignore the woman who had made such effort to attract her attention and now running towards her. Catching up and calling Rose aside, she said “I can’t believe that you are going back, we need you to stay for a longer time and sensitize our daughters.” Out of her wisdom, Rose was keen to respond to this woman, so she said “It could not be better than this, my sister; we have done the most important thing - to educate you. I believe so far and with that information, our daughters are in a position to make an informed decision.”

The woman nodded back in agreement to the response Rose had given and stated that the information was given at just the right time and in the right manner. She went further to admit that since the reporting of the first case of COVID-19 when the schools were consequently closed, the parents had experienced so many struggles in keeping up with their teenage daughters who had just started “knowing themselves”. She mentioned to Rose that her greatest fear was the risk of her two daughters getting unwanted pregnancies, as she herself still struggles to single-handedly educate them.

As usual, Rose remained keen on the kind of responses she was giving the lady, realizing the community so much relied on the information that they receive from her. She then shared with her that it was the parent’s responsibility to share with their children on sexuality as they grow, as this was one of the factors that had contributed to a majority of teenage pregnancies. She then wrapped up the conversation by saying, “Despite about access to family planning, we have also shared with your daughters on the need for safe sex and abstinence, as this will also save them from a myriad of repercussions including contacting STIs’ & HIV/AIDs.

It was the team’s joy that they had also capacity build the facility nurse on how to offer the family planning services to the clients. According to Rose, it was such an impact made within a short time- and this continues to make her passionate about what she does.

Thanks to GG support - in the past three months CHAT was able to reach a total of 4,982 individuals with behavior change communication (bcc) information with 1,523 family planning clients receiving different contraception methods, of which 1,222 chose the long-term methods giving 3 and 5-years protection against unwanted pregnancies & 22,315 condoms were distributed.

“Childbearing, I mean, if there's no place to go to deliver your baby, then you're the one that's delivering in those unhealthy circumstances. Or if you can't get access to family planning, your chances of surviving and being able to bring your kids up if they come one right after the other, that is what locks you into a cycle of poverty” 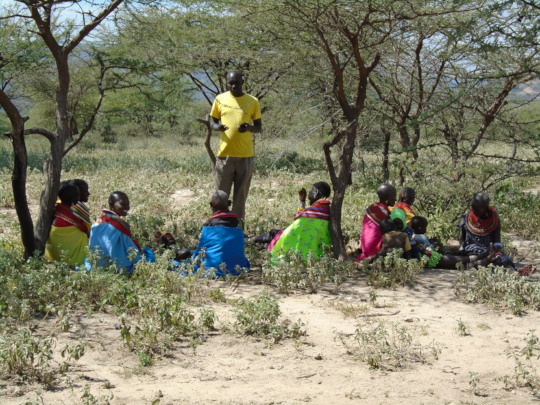 Sensitization during a motor mobile clinic 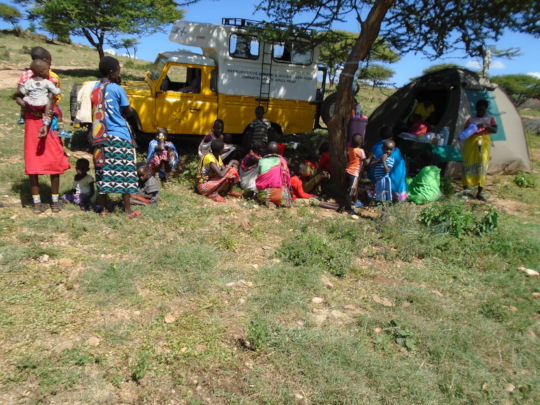 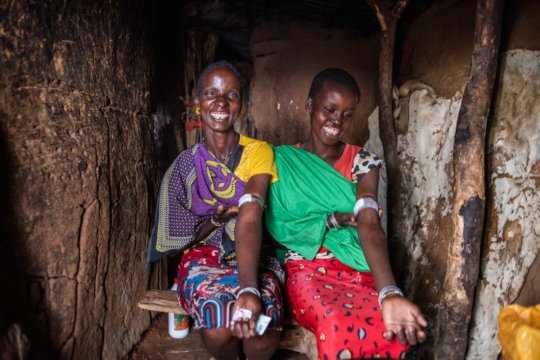 Being evening and after such a busy day, Pauline (a community own resource person (CORPs) and partner of CHAT’s) has a lot running through her head - including family matters. Just before she crossed the road to the other side to get home, she felt a soft pat on her back, and looking back she noticed a young girl who was all smiles at her. She recalled her very fast and almost fell into an embrace with the girl, but then remembered that the pandemic dictates contrary and took a step back for a wave.

“Pauline, you are more than a mother to me, “said the girl, as she became really emotional about it - Pauline spotted tears flowing down her face- tears of joy. She smiled and comforted the young girl back to normalcy and told her “It is well, my daughter. Every challenge has a solution and in every hardship, there is always a way out.” The 15-year-old, who happens to be a class eight candidate in one of the neighboring primary schools, had a lot to thank Pauline for.

Pauline recalled how it cost courage and passion for the young girl to stand firm and bring a smile to her life after she had been through a lot at her tender age. She remembered what transpired when the schools were closed down indefinitely and learners were required to stay with their parents at their respective homes for an unknown duration of time. “I almost shed tears whenever I remember how this young girl sneaked into my house one evening and demanded that I should take her secretly to the dispensary to have contraception. At first, I was in shock as to why she was so insistent but understood after the girl opened up that she had eavesdropped on her father planning to give her out for marriage”.

Pauline narrated how the father succeeded in having the girl married in April. However, when schools resumed and especially their candidate class, the girl shared with her then new husband that she wanted to go back to school, an idea which the husband opposed, this decided for the young girl to escape a few days later. She ran to the area Chief who summoned the husband and the father. They were forced to let the girl resume her studies whilst the other family members, who supported her getting married, threatened her out of her home. It was then that Pauline, who has always been passionate about fellow women and especially young girls, talked with the management of a private school who agreed to educate and take care of the vulnerable girl.

“Were it not for your support in ensuring I have access to contraception, I would be in the national statistics of the girls who have dropped out of school due to unwanted pregnancies during this COVID-19 pandemic“ stated the girl who became emotional again.

Thanks to GG support in the past three months CHAT was able to reach a total of 4,982 individuals with behavior change communication (bcc) information with 1,523 family planning clients receiving different contraception methods, of which 1,222 chose the long-term methods giving 3 and 5-years protection against unwanted pregnancies =- & 22,315 condoms were distributed.

“We should be respectful but we must also have the courage to stop harmful practices that impoverish girls, women and their communities”. 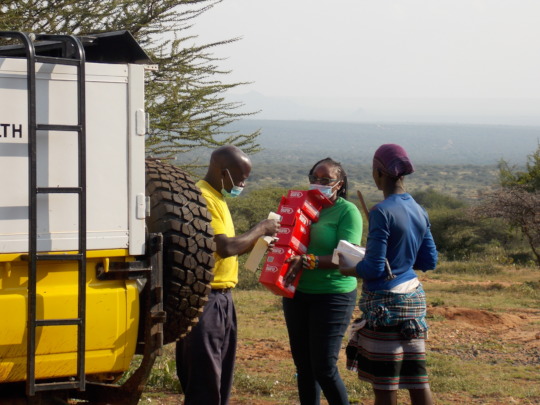 CHAT team sharing condoms to a young moran
‹ 1 2 3 4 5 6 7 8 9 ... 25 ›
WARNING: Javascript is currently disabled or is not available in your browser. GlobalGiving makes extensive use of Javascript and will not function properly with Javascript disabled. Please enable Javascript and refresh this page.