The difference you can make!

By Dr Shabnum Sarfraz - Technical Advisor
Tremendous progress has been made since the implementation of this project. Its growing success is spreading rays of hope amongst the arthritis patients. With the support of the Arthritis Care Foundation (ACF) and the Fatima Memorial Hospital (FMH), many patients have been diagnosed at initiated timely treatment which has consequently resulted in effective response, thus reducing disabilities and fatal outcomes.
The patient depicted above in the photograph is Ms. Rubina, who was suffering from severe disability and was bound to a wheelchair due to delay in her diagnosis and referral .With the help and support of ACF, she had her hip replacement done and you can see that she is now able to walk and take care of her loved ones.
FMH, ACF and arthritis patients sincerely thank all their supporters who have provided funds for the not only expensive treatments like Biologic Therapy but also for providing scholarships to trainees in Rheumatology in order to have qualified rheumatologists to for providing expert care to the ever growing number of arthritis patients.
We would highly encourage your further support in this program and we warmly welcome all your suggestions regarding how to improve our work and what more can be done for this project.

The Gift of Education 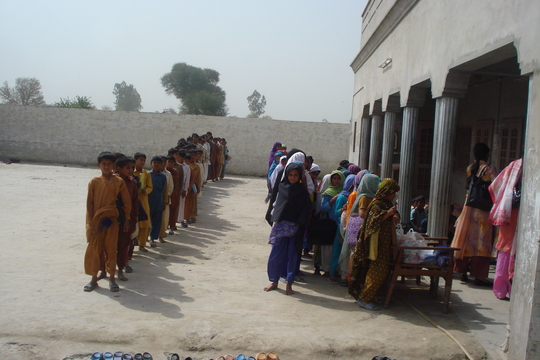 Segregation of students prior to conducting tests

05.04.2011: In a third world country like Pakistan, education for the youth cannot be compromised in the least. In fact, the aspect of education should be paid particular attention to given its dire importance in the developing world.  The disastrous flooding in the summer of 2010 in Pakistan caused widespread damage to over a third of the country. And of course, school premises were included in the list of destruction the flooding caused.

Hence bearing this in mind, Fatima Memorial Hospital – Nur Foundation decided to set up a school in the outskirts of Dera Ghazi Khan in a locality known as Haibat Mastui. As reported earlier on, the school began operations in November 2010 and was running successfully with over 400 students enrolled for non-formal schooling. But as April began to approach, our team of educational experts from Lahore, embarked on a three day trip to visit the schooling facility in Haibat Mastui on the 27th of March 2011.

The main purpose of this trip can be described as a three-fold process in nature.  Firstly, as the academic year for schools in Pakistan begins in April, it was necessary to categorize students their respective grade levels based on their educational ability so the transition from a non-formal to a formal school could be made. Secondly, stationary and books were to be distributed amongst the children in the school. Last but not the least, proper training sessions were to be undertaken with the teachers in order to ensure they could handle various issues within the school.

Written and oral assessments were conducted by the educational experts sent in from Lahore. These tests were based on a variety of topics taught in primary level. Moreover, formal interviews with students were also carried out. On the basis of these tests, approximately 180 plus students were placed into classes on the basis of their competence, age and gender. The students were placed in the following classes: Nursery I & II, Prep I, Class I (two sections) with 1 teacher responsible for each of the aforementioned classes.

With the help of your generous donations, food items such as packets of biscuits and chips, as well as stationary and books were distributed amongst all the children which were all happily accepted. Detailed sessions on a variety of topics were held with the five teachers in charge of the above mentioned sections. Hence, the purpose of the trip was completely fulfilled.

The next trip is planned for end April where monitoring and evaluation of the school will be conducted. Furthermore, there are plans to distribute books and stationary to children as well.

Fatima Memorial Hospital - Nur Foundation is enormously grateful of all the funds we have been receiving. These children are the future of our nation and with your support we will ensure that it is nourished into a sturdy, bright and auspicious tomorrow. Please continue to visit Global Giving in order to receive regular updates about the continued success of this project. 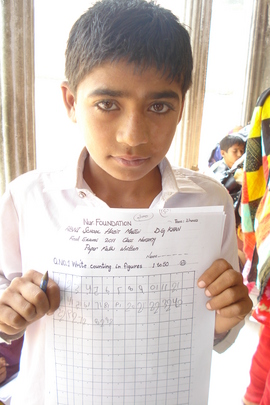 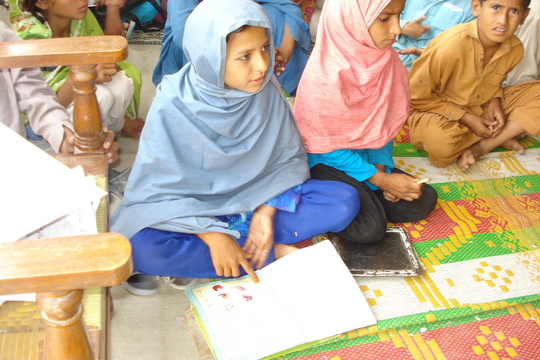 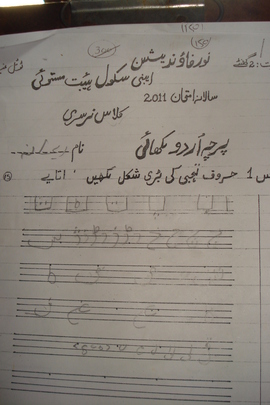 The assessment test developed by FMS 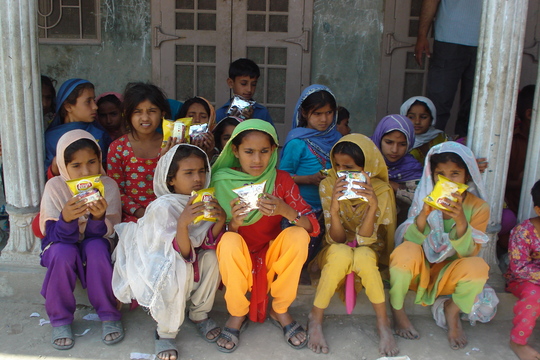 Students happily munching on their snacks 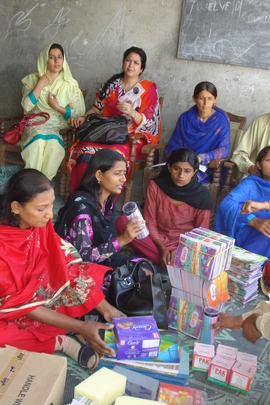 Our Efforts to Date 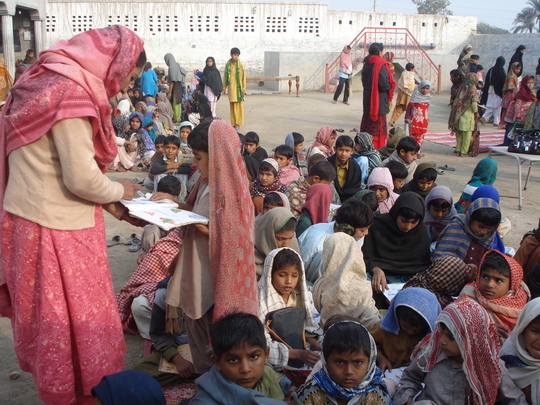 17.01.11: In order to facilitate the flood affected in terms of their development; both social and intellectual, Fatima Memorial Hospital in collaboration with the Nur Foundation has taken the initiative to start an academic project in the area of Haibat Mastui which is located in the outskirts of Dera Ghazi Khan in Pakistan With your generous donations, we have set up an educational institute which at the moment is catering to approximately 300 students. Five teachers, with one Head teacher have divided up these children into sections; teaching and supervising their activities. It is with immense delight that we report that these students which were once absolutely illiterate are now showing enormous progress. Our students can now write alphabets in both English and Urdu as well as count in English and Urdu numeric. These are baby steps but the growth of our students is showing auspicious signs of a much brighter future.  Come April, we plan to establish a proper matriculate system which would be at par with the level of education one can find in a well reputed public institute of Pakistan. In these bleak circumstances, the unfortunate and flood affected youth is crying out for a ray of hope which can disentangle them from a web of manifold predicaments. Education is the best tool we can arm them with to be able to strike back at the misfortunes they have been bombarded with. With education, these children will be able to get back on their own feet as independent, self sufficient and responsible citizens. With your help, these children have had a chance to receive proper education; a right which is theirs. Nur Foundation is enormously grateful of all the funds we have been receiving and we would like to pledge for your added support. This is the future of our nation and with your support we will ensure that it is nourished into a sturdy, bright and auspicious tomorrow. Please continue to visit Global Giving in order to receive regular updates about the continued success of this project. 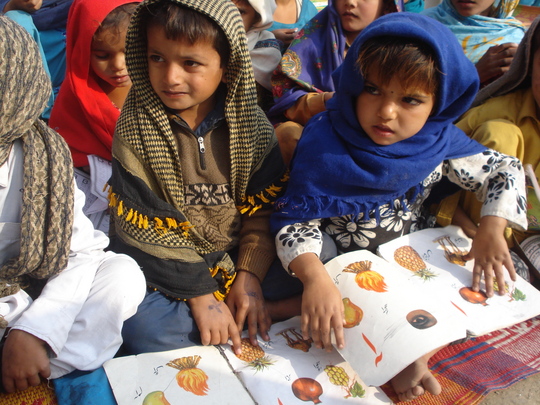 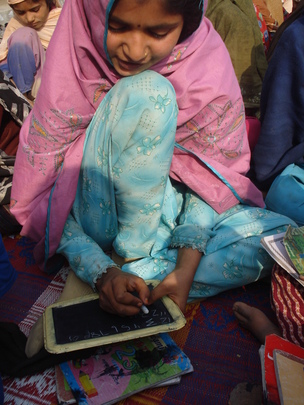 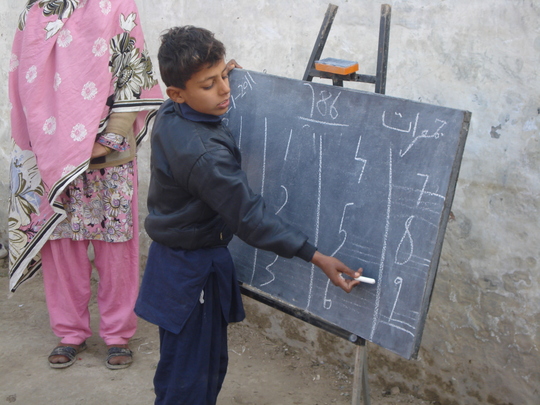 Showing Off his Newly-acquired Skills
‹ 1 ... 70 71 72 73 74 75 76 77 78 ›
WARNING: Javascript is currently disabled or is not available in your browser. GlobalGiving makes extensive use of Javascript and will not function properly with Javascript disabled. Please enable Javascript and refresh this page.