The Blessing of Eyesight!

During the last 20 years, incredible progress has been made to strengthen eye health systems in Pakistan through public/private partnerships. Working with international organizations, the national program for prevention and control of blindness has improved infrastructure, human resources and outreach of eye care services to a great extent. A comprehensive eye care approach that identifies districts as a unit of implementation, while establishing the link between primary and secondary health care, played a key role in this change.

Despite this, it is alarming that public sector share in this extraordinary progress is only one-sixth, which is lower than the contribution made by a single charity organization. As a whole, four-fifths (82.3 per cent) of the burden is shared by non-governmental organizations and the private sector.

The big question is: why do people prefer accessing cataract surgical services at private/charity hospitals despite free services (as the government claims) being available at government hospitals? Is the public health system working efficiently while ensuring value for public money? In the long run, Pakistan’s health sector needs some structural changes to improve governance, accountability and efficiency. It is essential that these changes take place soon, and in a way that ensures health services are affordable and equitable.

Pakistan is among 12 countries with the highest cataract surgical rate, which is the number of cataract operations performed per million people in one year and is used as a proxy indicator of access to cataract services in a country.

We at Fatima Memorial Hospital have taken this initiative of not only creating awareness about the treatment of cataract but it also provides free treatment to those suffering from this painful disease.

It is pertinent to mentioned that the number of patients waiting in line for surgeries has increased due to COVID19 and in general, the number of cataract patients is increasing day by day, the resources of FMH are limited, we require donations from our altruistic donors. At the moment when the COVID19 pandemic has taken over by storm, all the resources have been diverted towards treating COVID19 patients which is affecting other medical treatments. At this point in time we need extra support from out valued donors so that we can also address cataract surgeries which are increasing day by day.

As a charitable trust hospital, we are heavily dependent on the assistance of our generous donors who could support it in the pursuit of saving the eyesight of many of the cataract patients. We request you for your continued support in helping us treat these patients.

Studies conducted in Pakistan conclude that the average rate of return to another year of schooling is 5 to 7 percent. The constitution of Pakistan allows free and compulsory education for the children of ages (5-16) years. After the 18th constitutional amendment (2010) education has become a provincial subject, but federal government has always played an imperative role in this regard.

The overall literacy rate was 18% while male and female literacy rate was 19%, 12% respectively in 1951 in Pakistan. It augmented to 60%, 71%, and 49% respectively in 2018-19.Pakistan is ranked 152 out of 189 countries in the United Nations Development Program (UNDP) Human Development Index (HDI) ranking. The Human Development Report 2019 stated that Pakistan has not exhibited improvement in key educational indicators, such as literacy rate, gross enrolment ratio, and expenditure on education, as compared to regional countries.

Pakistan’s literacy rate 57 percent lags well behind its neighboring countries. The primary school dropout rate is 22.7 percent (3rd highest in the region after Bangladesh and Nepal), which is alarming given it as at the stage of formative learning (Economic Survey of Pakistan, 2019-20).The United Nations Global Education Monitoring Report 2016, concluded that Pakistan is 50 years in primary education while 60 years behind in secondary education to achieve the education goals. The number of children at primary, secondary and upper secondary level still from out of school were 5.6, 5.5, 10.4 million respectively. This is an alarming and mind boggling situation for the whole nation. Why this happened? Let us try to find out the answer of the question.

So in the name of English Medium, there was a mushrooming of local private schools in rural and urban areas. The local English medium schools attracted the middle class. But they could not help the poor class to catch up due to their poor economic condition. They started more or less ten education policies for the betterment of non elite education system that did not fully achieve their goals. So education became a dream for the poor class.

The post-COVID impact due to the prolong closure of school will have a massive impact on Pakistan’s already fragile education system, such as learning gaps, and social/emotional/mental well-being. This could also lead to no promotion next year, ultimately leading to a halt in continuity of education.

The Covid-19 pandemic is expected to impact us for a long time. Millions of children have no access to school and for our already fragile education system this is indeed an unprecedented situation in the history of education. However, we must embrace this unexpected change and apply an alternate approach to ensure continuity in education.

This shocking statistic and the poor state of Education in Pakistan since the very beginning is the very reason that Fatima Memorial Hospital took the initiative of commencing the NUR Community Outreach Program (NCOP) in the year 1985. The objective of NCOP is to act as a catalyst of change in order to bring about socio-economic development of the underprivileged communities, via an integrated approach to education, healthcare and economic empowerment.

NUR Foundation has been providing education to the underprivileged communities (without any discrimination of age/gender/caste/religion, etc) through its chain of formal and informal schools in underdeveloped and neglected areas of Lahore. Every year, approximately 1800 students pass out from our schools. The current students enrolled in NCOP Schools located in Malikpur/Talwara, Lakhudair, Nainsukh and Gajjumatta total 1476.

In addition to this, NUR Foundation has also started the initiative of Adult Literacy Program in which 30 adult females are currently enrolled. The objective of this program is to provide the basic level of education to adult women who have never been to a school before.

With current Pandemic (COVID19) around, we have more challenges to address. The Rural Areas need more help and assistance, so that our teachers can educate the people about the disease and also keep educating the children on individual basis with all precautions.

Your generous support is of immense value to us so we urge you to continue the donation and support us. 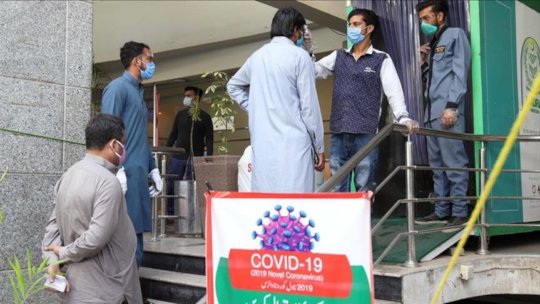 As a healthcare entity, Fatima Memorial Hospital (FMH) has been increasingly focusing on the safe care promise, outlining the many steps that have been taken to protect the patient as well as the healthcare professionals. That includes virtual check-ins (Telemedicine i.e. launched recently), screening at all our entry points, universal masking, social distancing through rearranged waiting areas, and enhanced cleaning, especially for high-touch spaces. There are countless patients who are delaying urgent or necessary follow-up care in order to avoid contact with COVID19 at the hospital, as a result of which there is a negative impact on their health and well-being. We at FMH really want to offer some reassurance and get that message to our valued patients that it's safe to come back to the hospital when they’re in need.

As soon as the Pandemic hit Pakistan, we moved quickly to run what was actually more of a public service announcement focused on stopping the spread of COVID19, providing sources for accurate information and sharing resources with our patients & healthcare professionals about when and how to access care. We've also worked to develop culturally relevant messaging that aims to engage patients with their families and raise awareness about the need to be cautious and avoid contact with COVID19.

COVID19 in Pakistan is on the rise again as cases surge amid second wave. Fatima Memorial was amongst the first teaching hospitals to declare a Covid-19 Isolation Ward and Critical Care Unit during the COVID-19 pandemic. Following were designated for COVID-19:

Separate Filter Clinic for screening of all OPD patients to prevent cross contamination.

Necessary personal protective equipment (PPE) for the safety of clinical, paramedical and support staff was also arranged through donations. Additional 4 hand washing facilities were provided at entry points of the hospital. A walk-through disinfection tunnel was also installed at the main entrance to mitigate infection. Patients were encouraged to maintain a safe social distance in waiting areas.

Since the cases are increasing, we as a hospital are preparing for the worse. In order to do so, the hospital requires support from the donors so that in the dire situation, the hospital is able to cater to the needs of the patients and most importantly the paramedic staff.

More and more awareness sessions on Covid-19 are being arranged for all clinical staff in collaboration with the World Health Organization. The Infection Control Department conducted training sessions on the donning and doffing of PPEs, hand hygiene for clinical & paramedical staff, disposal of COVID-19 waste, public awareness sessions regarding safety measures.

So far Fatima Memorial has treated more almost 150 patients and still counting. The biggest challenge for this charity based institution is the arrangement of equipment such as PPE Kits, Masks, Ventilators, which are key essentials for saving lives. The frontline staff is at risk at all times and require protective gear in order to cater to patients. A number of patients are moved to the ICU where ventilators are required and unfortunately, the hospital does not have enough ventilators. As a healthcare facility, we are doing whatever we can to save lives, however, there have been cases where the hospital could not take more patients due to non-availability of ventilators.

Based on the above facts, our valued donors are requested to facilitate the hospital through donations so that all required equipment can be procured timely.

Our donors have always supported us and we would like them to continue doing so especially in these testing times.

‹ 1 2 3 4 5 6 7 8 9 ... 78 ›
WARNING: Javascript is currently disabled or is not available in your browser. GlobalGiving makes extensive use of Javascript and will not function properly with Javascript disabled. Please enable Javascript and refresh this page.