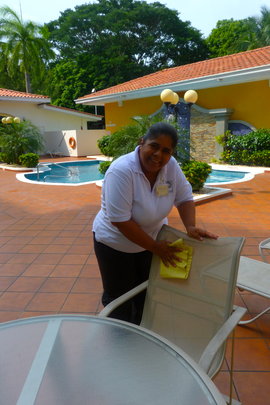 The CAPTA program consists of two phases, the Foundation Cycle and the Vocational Training. After the first four weeks, the CAPTA class has successfully managed the Foundation Cycle and enters the second phase. At this point, the CAPTA women can choose between receiving training as housekeeper assistant or as waitress. For the next two weeks, the women will receive training in their area of choice at the Panama International Hotel School followed by a one-week internship at the hotels of the Bern Group in Panama.

For the first three days, the women enrolled as housekeeping assistants receive a general introduction in the fields of qualitative service, hygiene, personal appearance, telephone answering and others. On the fourth day, the women learn how to do tasks related to their future occupation; these are then practiced under supervision for the rest of the time at the hotel school.

The women enrolled as waitresses have three days of general introduction covering similar fields as for the housekeepers, followed by four days of instruction. The second week is then fully dedicated to practicing the learned under supervision.

This week, the twenty-one women are interning at different hotels throughout Panama.

Thank you for making all this possible! Thanks to GlobalGiving donors, two of this women were able to enroll and finish CAPTA course. You helped them to change their lives!

All of us in Calicanto are very proud of this women from our community, wish them great success and are looking forward to a beautiful graduation ceremony on August 24th.  It is touching to see how far these women came in just seven short weeks and we also want to share with you this magical moment as they take the first steps in their new life: take a look at the invitation in our website or to last June Group's Graduation video!

You can continue helping more women to do so donating again or telling your friends about us and why you believe in this project: invite them to become our fans in Facebook to get to know us better.

Best regards from all the Calicanto Team. 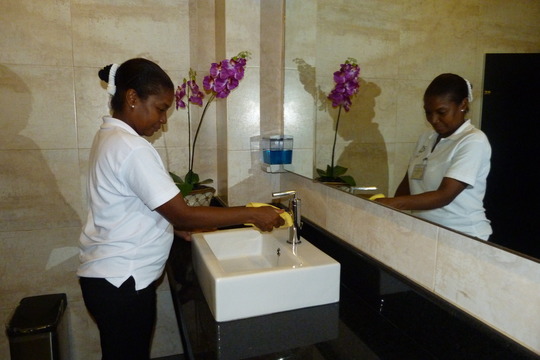 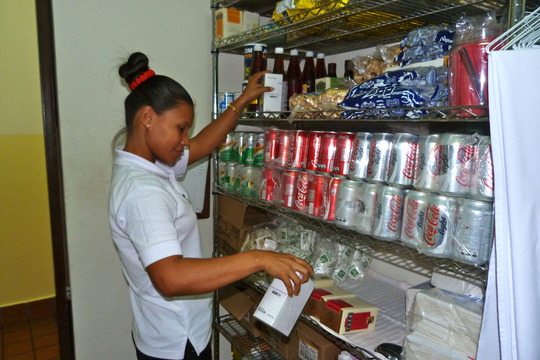 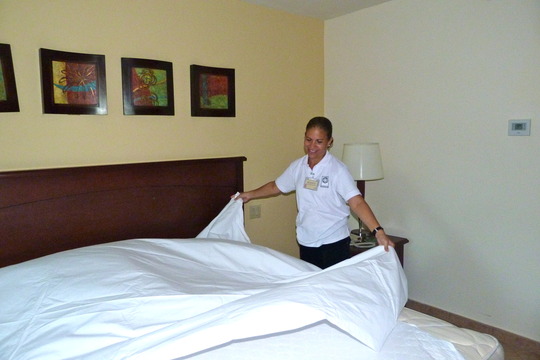 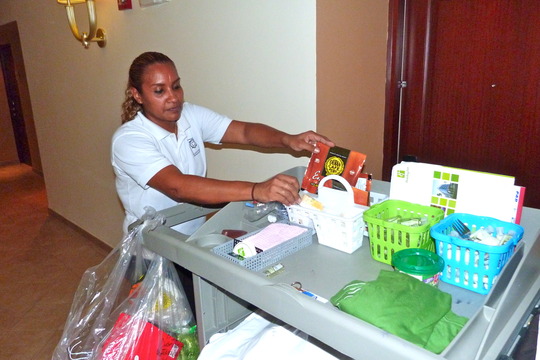 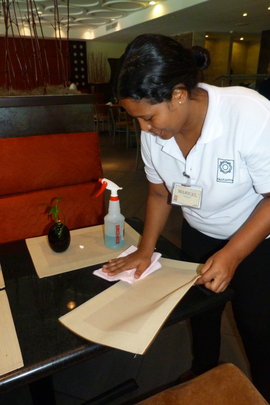 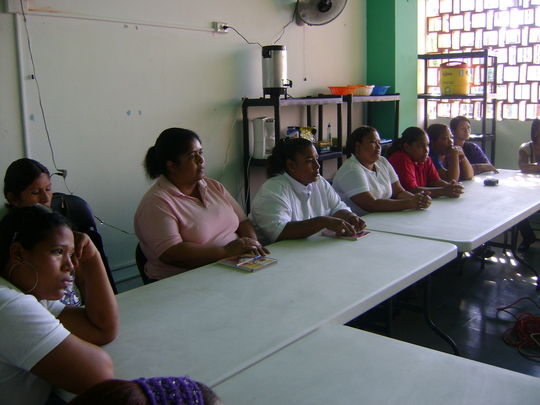 On July 4th, 2011 a group of 22 women started the CAPTA program from Fundacion Calicanto. This courses group includes 9 women from the district Santa Ana, 3 from El Chorillo, 2 from each Las Cumbres, Curundu, Arraijan and Calidonia and 1 each from San Felipe and La Chorrera.

Thanks to our GlobalGiving donors, two of this women were able to enroll this class!!  We want to invite all our donors to keep on helping so we can achieve our goal of 20 Women sponsored by GlobalGiving donations to be able to graduate from CAPTA.  Talk to your friends about this program that is changing so many lives!!

Edilsa, one of the participants, says that she is thrilled about the course, and until now what she has really liked the Emotional Intelligence module, because it has given her the tools to understand and to deal with pain.

The program initiated in 2005, with one to two courses annually has become increasingly popular. In 2010, for the first time 3 courses graduated and this year 7 courses will graduate!! Further, since July 2011, the inscription to the CAPTA course is now open all year and no longer limited to seminal periods. Women wishing to apply can do so directly at the main office of Fundacion Calicanto (see our Website).

We congratulate the Fourth CAPTA Class July 2011 and wish them all the best! 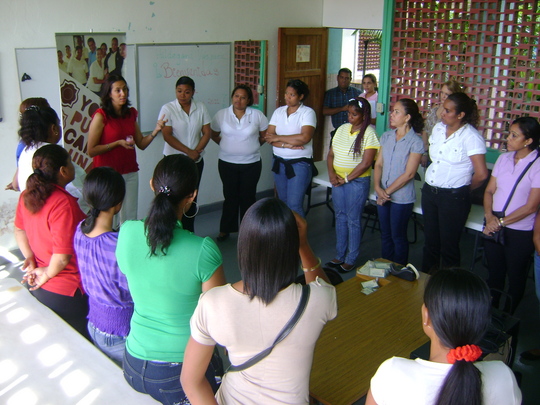 The warmest welcome: circle of our inner light! 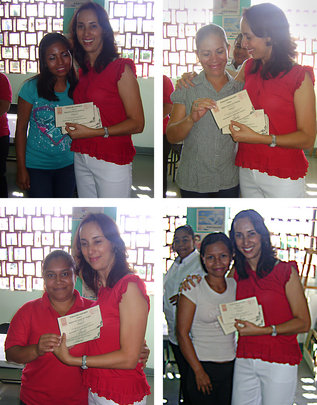 All the women received a scholarship certificate 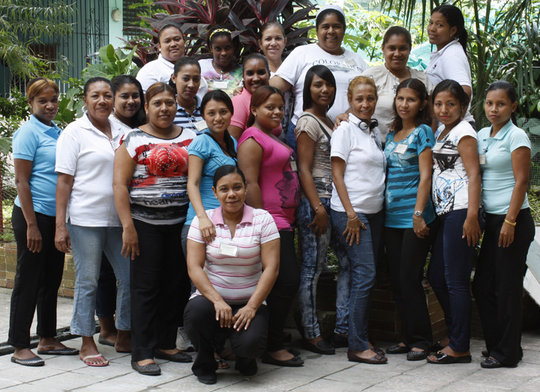 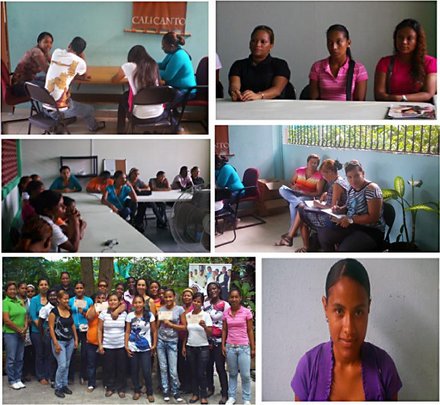 All of this happened after weeks of recruiting, and choosing the students by interviews with our psychologists and instructors.  The women were selected through personal interviews by the program psychologists primarily designed to gauge willingness to change.  At the opening ceremony each woman is given a uniform and a “scholarship certificate” which states the direct cost of the course ($1,000).  Included in the scholarship is a small stipend of $5 per week to cover transportation costs.

Then, they were ready to begin the "Fundamental Cycle":  The group met five days per week for eight hours per day during four weeks.  Most of the time is spent in group sessions led by instructors, with weekly one-on-one meetings with the psychologist to address individual issues. The core personal development workshop sessions use role playing to teach communication skills, team work, resolution of interpersonal disputes and emotional intelligence. The life skills sessions teach health and hygiene, first aid, voice and diction and personal finance.

By the time they enter the vocational training phase, they have formed a team, and we believe this mutual support is not only critical to their success in hotel school and in their new jobs, but is forming the foundation of an important community network. 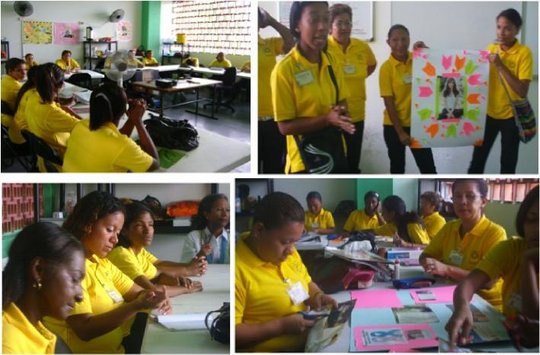 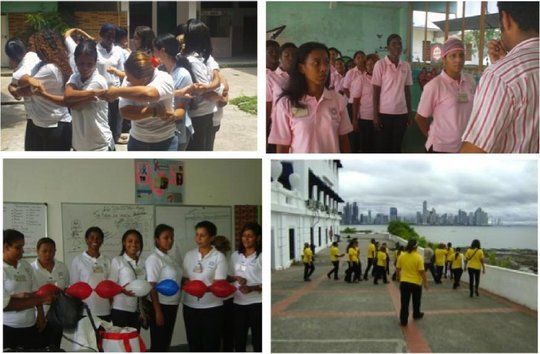 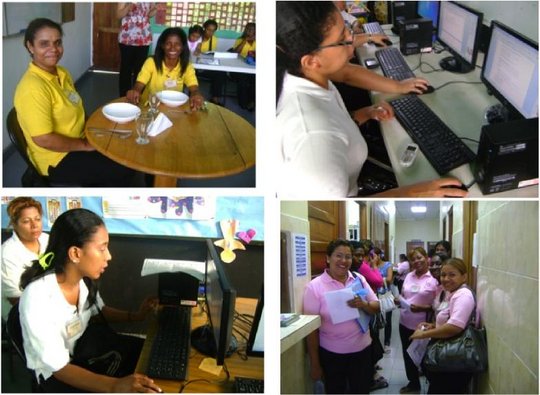 Writing CVs and Customer Service Lessons
‹ 1 ... 37 38 39 40 41 42 43 44 45 ›
WARNING: Javascript is currently disabled or is not available in your browser. GlobalGiving makes extensive use of Javascript and will not function properly with Javascript disabled. Please enable Javascript and refresh this page.