Yesterday the organizations defending Casco Viejo held a press conference to make several pronouncements regarding the project and announce the initiation of new legal claims.

Someone, we suspect the government and/or Odebrecht, organized dozens of people to surround the building and try to interrupt the conference. This is not the first time they have done this in an attempt to show that the "people" support the project. It has long been speculated that people are paid to attend these kinds of demonstrations, but yesterday was the first day that the local news was able to directly record on video proof (see videos below of conference and the events afterword).

Those interruptions will only serve to help disseminate the points made by the groups at the conference, which were:

1.  Recalling the recent tragic destruction of sites in Timbuktu, Syria and Afghanistan, the groups called on UNESCO to use its voice while there is still time to help protect Casco Viejo from being permanently disfigured. The groups called for an extraordinary meeting of the World Heritage Committee, citing their concern that the government's plan is to advance the project so far that it cannot be stopped by next year's regular UNESCO meeting.

2. Announcing a lawsuit based on failure to take into consideration the environmental impacts of the project asking for the enjoyment of the project pending further study.

3. Demanding explanations from specific government officials and a detailed explanation for the project's cost (double per kilometer the cost of Panama's new subway) and disclosure of the studies that purportedly show that the other alternatives are not viable.

4. Clarifying that the change from the original tunnel plan to the destructive seafront route was made at the suggestion of the contractor, and requesting that the CEO of Construtora Norberto Odebrecht take a personal involvement in the project to assure that it does not lead to the disfigurement of a world heritage site.

We will continue to drive on these points in the coming weeks and keep you informed.

The Battle to Save Casco Intensifies

The fight to save Casco Viejo from being wrapped in concrete is intensifying quickly. In July when UNESCO's resolution came out it asked for three basic things regarding the highway: (1) give them a traffic study showing what alternatives exist to a seafront highway, (2) study the aesthetic impact of the current plan on Casco's "Universal Values" (i.e. the things that make it a World Heritage Site), and (3) don't build anything until we've had a chance to look at 1 & 2.

As you know from our last update, the Government of Panama and the contractor, Odebrecht, had actually been constructing parts of the highway (outside the historic district limits) during the UNESCO proceedings and lying to UNESCO about it.  Not surprisingly, they have not stopped since, so, as you can see from the photos, the preliminary landfill portion of the highway is quite advanced and already starting to penetrate the limits of the historic district.  The studies UNESCO asked for are apparently completed and delivered, but the Government refuses to release them.

The Government has come out publicly saying that the highway has been approved by UNESCO. This is the second time that they have lied to the Panamanian public about this. The eleven organizations joined with us under the Orgullo Panama banner wrote a letter notifying the Director General and Chairperson of UNESCO putting them all on notice that a crime against World Heritage is taking place and there is a need to act urgently.

We have a number of legal actions in process, and next week we have a press conference with the ten other civic organizations joined with us to announce other measures that we are launching and several new groups who have joined. We've now got a full time coordinator and are adding more volunteers every day.

In addition, Orgullo Panama has launched an online petition drive to bring attention to the fact that the company profiting from this project, Odebrecht, is controlled by Marcelo Odebrecht, a man who has spent considerable energy trying to rebuild his company's image around its "sustainability" after a series of corruption scandals in Brazil in the 1990s that ultimately brought down a Brazilian government.  The petition is here: www.orgullo.com.pa, and we encourage you all to sign and send to any friends you have who know Casco or who care about protecting World Heritage (it belongs to all citizens of the world, so anyone can sign).

Finally, as if the desecration of a World Heritage Site's setting weren't enough, the government began yesterday an intense campaign of evictions in Casco Viejo.  To the government (and certain building owners associated with the government who have long petitioned to have their buldings emptied by force so they do not have to pay the legally mandated costs) these people are simply intruders who need to be removed. But to most of us in Casco Viejo, they are our neighbors. To us at Calicanto, they are the human heritage that we are dedicated to protecting along with the architectural heritage. This kind of action reconfirms for us the current administration's unfortunate lack of understanding of what makes the neighborhood special, and reaffirms our committment to protect both the human and the architectural heritage of Casco Viejo.

We will continue the fight to save Casco, and we greatly appreciate your continuing support. 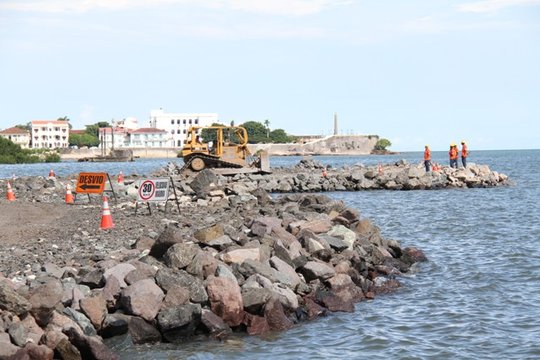 Construction With Casco in Background 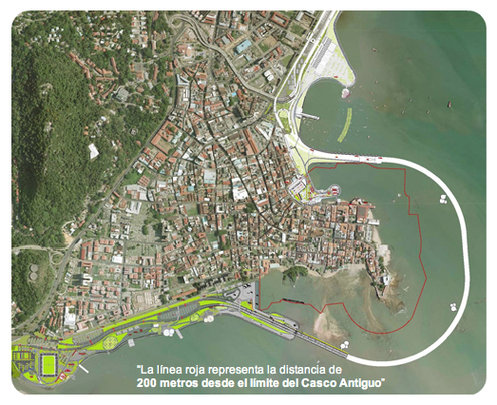 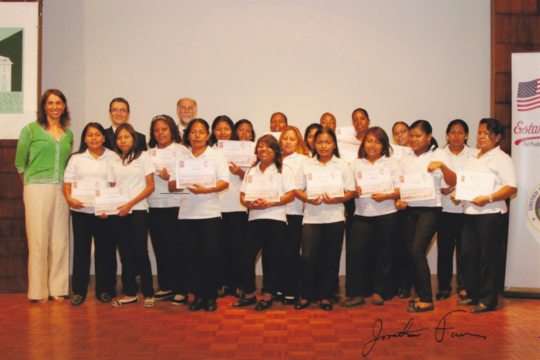 We are celebrating a big program accomplishment: CAPTA has graduated 20 different groups since its first in 2005. To date the program has trained 456 women for employment and 66% of them are working in the hotel industry.

CAPTA’s reach goes beyond employment training; CAPTA has motivated and inspired women to work toward a goal in their lives: a house, an education or job stability. Many CAPTA women have started as housekeepers and
are now working in administrative areas as receptionists and even as accountants!

Fundacion Calicanto is proud of each and every one of our graduates; they motivate us to continue our work in this community and they have proven that if given the tools to learn and find employment, they can succeed.

We’ve had many special guests celebrate this great accomplishment with us: Jonathan Farrar, United States Ambassador to Panama; Aprile Age, Director for the John P. McNulty Prize Foundation, Stanley Motta, Chairman of COPA Airlines, board directors, previous graduates and others.

We would especially like to thank all of our friends on Global Giving who could not be there but keep in touch through our reports; this accomplishment would not be possible without you.  I hope that you continue to keep in touch with
our work and look forward to the next 20 CAPTA groups, just like we do! 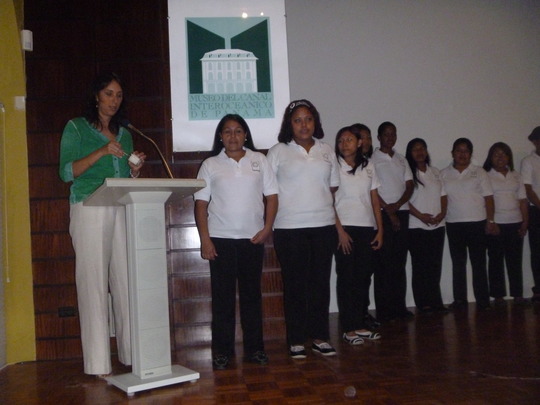 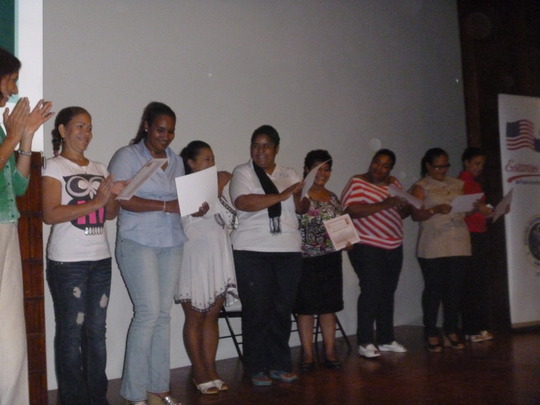 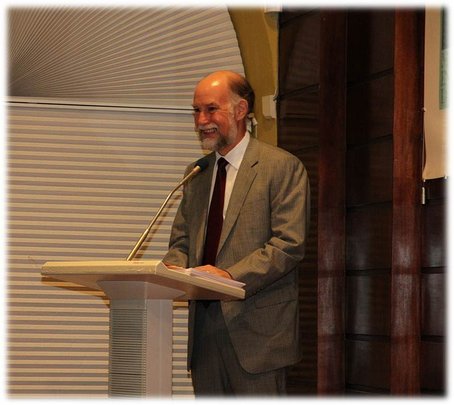 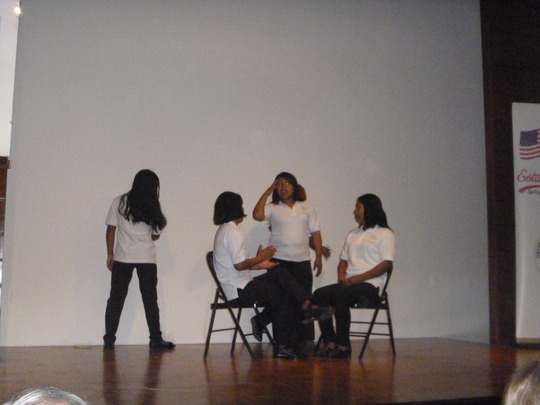 Customer service skit put on by CAPTA girls
‹ 1 ... 34 35 36 37 38 39 40 41 ... 45 ›
WARNING: Javascript is currently disabled or is not available in your browser. GlobalGiving makes extensive use of Javascript and will not function properly with Javascript disabled. Please enable Javascript and refresh this page.