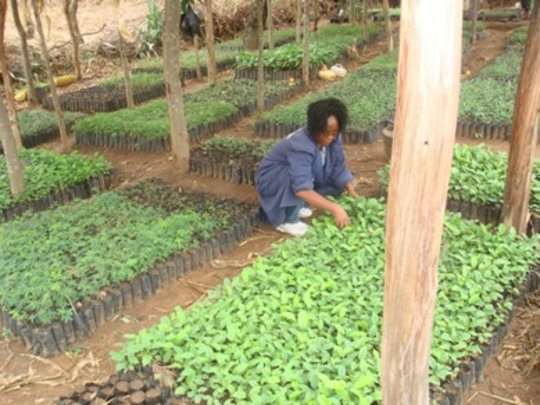 Extended tree nursery with over 30,000 seedlings

The much awaited rains started to fall at the beginning of November 2012. DNRC was ready with a total of 32,200 tree seedlings (of 22 species) to plant. Immediately after the rains started, our over 300 farmers started coming for the seedlings at our tree nursery, so they could plant them in time to catch the first rains. Within the first week of the rains, we had issued 30,000 seedlings to our ever energized and engaged farmers. Each of the 300 farmers got an average of 100 seedlings. The seedlings cost Kshs each, on average. The farmers were able to pay Kshs 20,000 (US$ 240) immediately. The remaining Kshs 10,000 will be paid in installments over time.

DNRC also donated 100 tree seedlings to Maiuni primary school and 100 to Muthwani secondary school. The schoolchildren come from the same community as our farmers. After learning how to plant and raise trees in school, they will be more motivated to help their parents tend the trees they’ve planted at home. These donations also raise awareness and interest from families who haven’t worked with us yet. So it’s good for the school, good for the DNRC, and good for the families whose children attend the school.

During the quarter, the farmers were trained in a range of forestry and farming techniques, with a focus on how to dig holes for saplings, add manure/ash and get ready for planting. Before the farmers were issued with the tree saplings, their holes were inspected and counted to match the number of seedlings to be issued. This is to make sure that farmers are committed to cultivating the trees (digging holes takes work and only pays off if the trees grow), that the trees have high survival rates, and that the seedlings are issued according to one’s ability to take care of them.

Three cisterns were funded during the quarter. The beneficiaries were Maiuni Primary School, which is building a food forest that will feed many children and need steady watering, and Mukita Nyolo and Tabitha kanywoki, in recognition for their outstanding woodlots.

DNRC priorities for the next few months 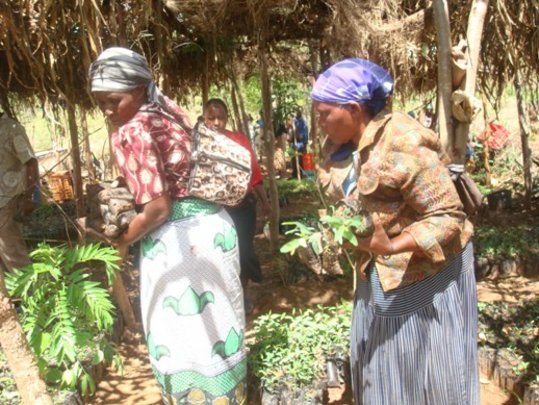 Farmers pick up their seedlings 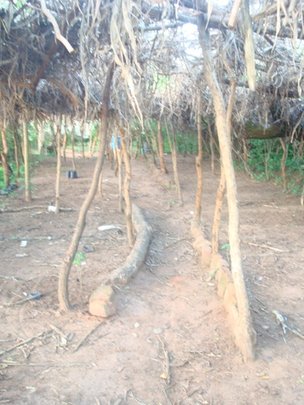 Tree nursery sits empty - all seedlings given out 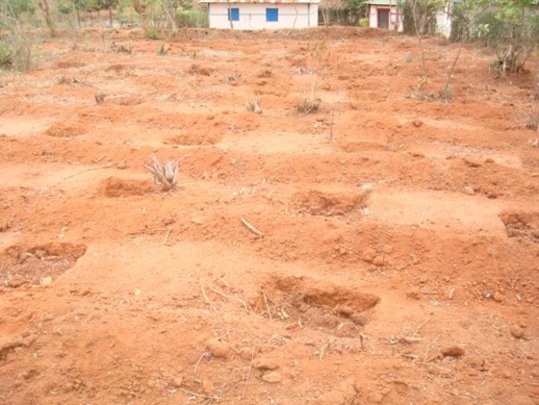 Tree holes dug, filled with manure and ready to go 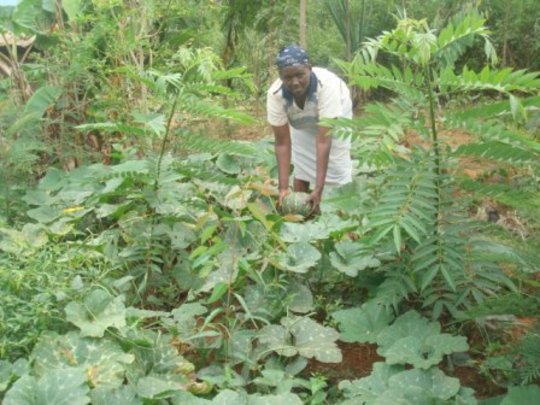 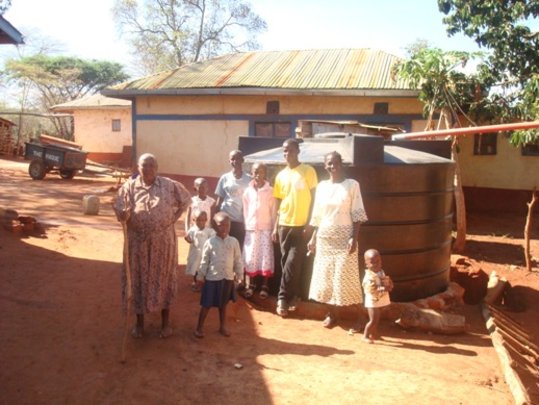 DNRC August 2012 Report: Visitors From the US! 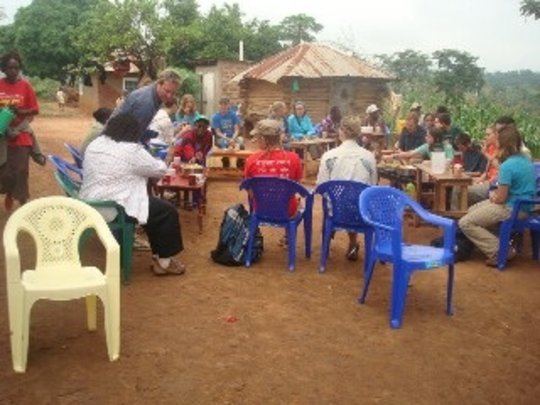 Meeting Over Chai Tea and Chapatis

Last month the DNRC hosted 14 students and 2 staff from the University of Wisconsin-Stevens Point's Natural Resource Management program, from which I graduated a few years ago, as well as 20 Kenyan students and practitioners. Their four-day field visit was part of the permaculture course that I teach at Nyumbani Village (http://www.nyumbani.org/), a holistic care and teaching community for orphans who lost their parents to HIV.

Our guests were housed by community members, and participated in a range of activities over the four days they were here. Here's a quick overview of their stay, with accompanying pictures:

Day 1, June 8th: The group arrived at the local Primary School at around 3pm, where they were warmly welcomed by school administrators, teachers, community members, pupils and the DNRC staff before touring community members' woodlots.

Day 2, June 9th: Our guests toured more woodlots, led by the DNRC staff, then helped to install two cisterns for capturing rainwater. They donated one of these cisterns themselves; the other was funded by church-based non-profit based near the University of Wisconsin. Not afraid of getting their hands dirty, the group carried sand, gravel, water and prepared the cistern base, which involves digging and leveling the base for the cisterns. The day was crowned with a party full of dancing and singing that was organized by community members.

Day 3, June 10th: Our guests worked in the DNRC tree nursery to clean up and pot planting bags. (Potting involves filling propagation bags with soil). They were able to pot over 3,500 pots in one day, which was a great achievement and help.

Day 4, June 11th : Our guests finished their trip where they arrived - at the local Maiuni primary school. Here they established a food forest by planting fruit trees (passion fruit, papaya, mangoes and citrus) and complementary tree species (acacias, moringa, leucena, and others). They then returned to Nyumbani Village, but not before enjoying a feast provided by the best cooks from the community.

We're very grateful to our guests for all of the help they provided over these four days. They helped moved our project forward, provided clean water for two families, and made many friends in the process.

Thank you for your continued interest and support in our work. I'll be sharing a more detailed report on our progress over the summer in October. 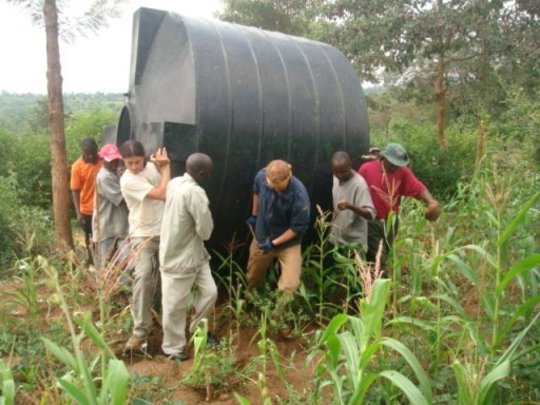 Working Together to Install the Cistern 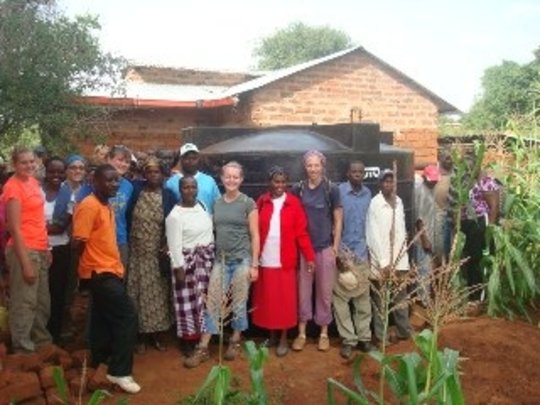 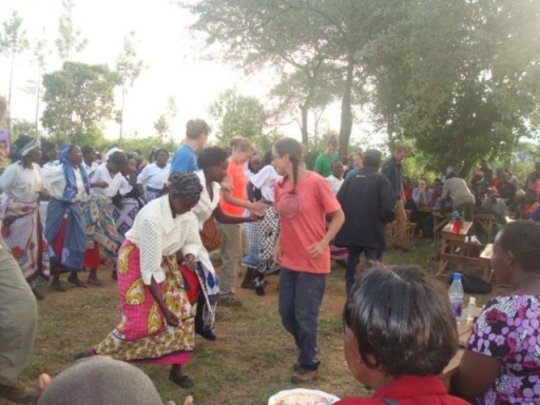 Dinner and a Dance 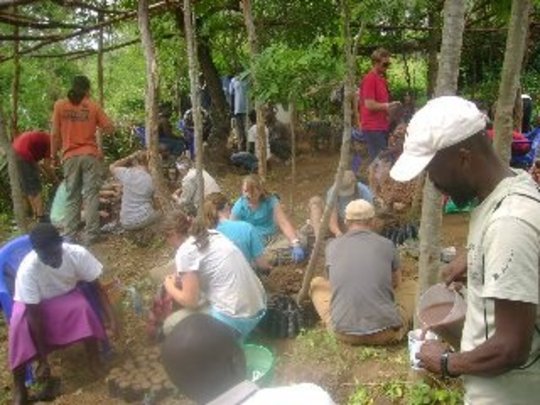 Potting Saplings in the DNRC Nursery 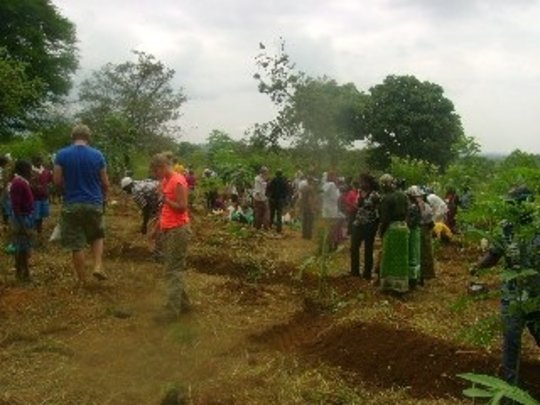 DNRC May 2012 Report: On Track To Meet Our Goals 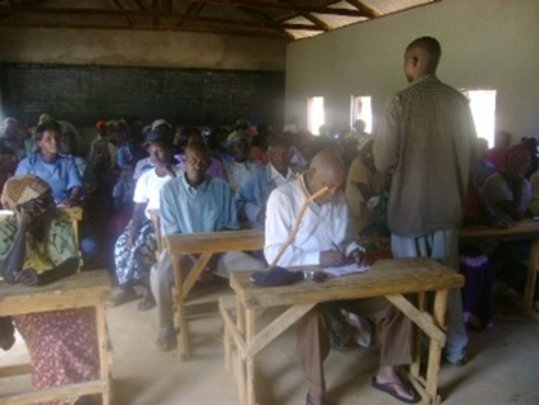 Activities Conducted During The Quarter

During January-March 2012, the DNRC planned and executed the following activities:

The 2012 annual work plan is to propagate 35,000-40,000 tree saplings of at least 15 different species. This quarter, we aimed to propagate at least 10,000 saplings, but water shortages during the Feb-March dry spell constrained us. We were still able to propagate 6,865 tree saplings, and are confident we can cover the deficit by planning 13,000 saplings in Q2 2012. To take advantage of the late-March to May rainy season, which has provided above-average rainfall, we expanded the nursery, purchased a donkey to carry water, and increased the number of part-time laborers we have working the nursery.

So far, DNRC is working with 5 groups in 5 areas (Maiuni, Kyooni, Ivumbu, Kalimani, and Kivani). According to the work plan, each group is scheduled to receive one formal training session per month. During the quarter, 15 trainings were conducted by the Project Coordinator, Daniel Mwenda, with assistance from Executive Director Nicholas Syano. Nicholas explained how and why planting trees is a foundation for poverty eradication, and Mwenda discussed the details of pruning, establishing proper tree planting holes, live mulching and using nitrogen-fixing plants to improve soil fertility. In total, 234 farmers received this training. Our 27 new recruits also received an additional training welcoming them to the DNRC program.

There were no trees planted in this quarter, because it was a dry spell. (Trees are issued and planted just before or during the April and December rains.) In Q1 we focused on visiting farmers at their properties to monitor progress and provide technical guidance and motivation as they manage trees they have already planted. During the quarter, DNRC staff visited 171 farmers, collecting baseline data to help track tree growth, health, and survival rates.

Our target is to recruit 100 more farmers this year to achieve a total of 307 farmers by the end of this year. We began the quarter with 207 farmers, and recruited 27 more over the quarter, putting us on track to achieve this target. Every indication suggests that as long as we continue to effectively implement the project, we will attract more than enough new recruits.

We received a donation of 3 cisterns which were installed by the whole group working together. This is unplanned activity and happens only when we get a cistern donated. It’s about $1200 for a 10,000 litre cistern, to buy, transport and put the fittings and gutters. It’s an activity that strengthens the community’s social fabric, as everyone comes together to install the cistern and also share the water with those without. The cisterns are given to those with the best woodlots. By the end of this quarter 15 families had benefited (15 cisterns were given out, one to each family). Those who have benefited contribute monthly to a fund that will contribute to purchasing more cisterns for more people. The beneficiaries during this quarter were Beatrice David, Wanza Muoki and Elizabeth Mwende.

The first three months of the year are the driest and most difficult for the families who live in the community we serve. Despite this, we were able to expand and improve our services and attract new recruits, and after April and May rains are back on track to meet our annual targets for seed propagation, training, and recruitment. Thanks to its hard-working staff, the strength and commitment of participant farmers, and the support of its donors, the DNRC is positively changing the lives of the people of Maiuni and demonstrating how to conduct poverty alleviation projects in drylands areas. Examples of practical methods that work in drylands are lacking, and therefore these marginalized habitats continue to suffer from extreme poverty and social exclusion. By experimenting and establishing best practices that work in the drylands of Maiuni, we are building a strong base for sustainable dryland development models that can be duplicated in other drylands regions. We look forward to continued steady growth in the second and third quarters of 2012. On-the-ground operations and recruitment are running well; the biggest risk we face right now is failing to reach our 2012 fundraising goals. This will be our main focus of our US-based staff this summer. 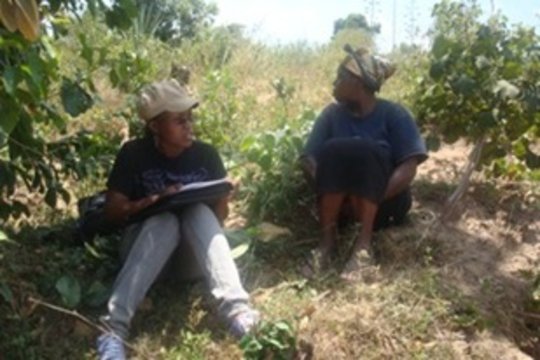 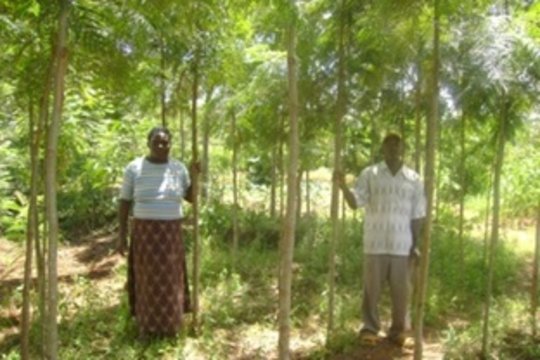 Proud Farmer With Trees She Planted in 2008 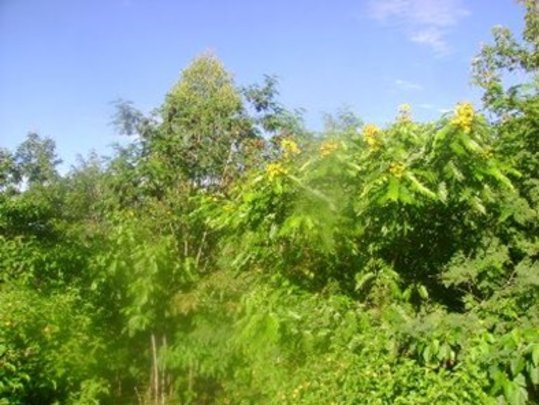 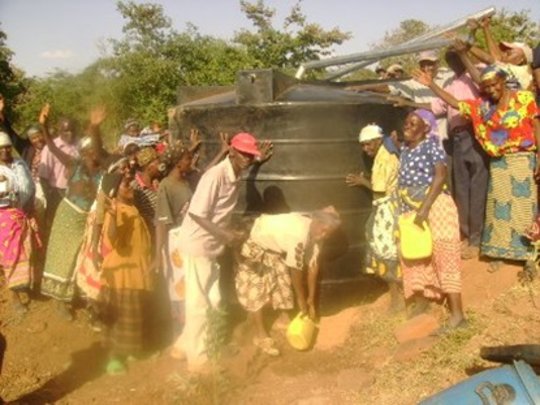 Community Comes Together To Install A New Cistern
‹ 1 ... 21 22 23 24 25 26 27 28 29 ›
WARNING: Javascript is currently disabled or is not available in your browser. GlobalGiving makes extensive use of Javascript and will not function properly with Javascript disabled. Please enable Javascript and refresh this page.