A doctor in the making

Sujatha who graduated with a degree in engineering and hired by HP in Bangalore is doing very well.

ASSET India Foundation arranged for funding through a donor for one of the sex trafficking survivors in Hyderabad to complete her medical school. The donor will fund her education for the next three years.

Progress has been made in identifying reliable partners in rural areas for the manufacture and distribution of sanitary pads along with mentrual education.

The Leaders and Laureates Conference chaired by Nobel Laureate Kailash Satyarthi in Amman, Jordan was a major success. Columbia University’s Global Center in Rio de Janeiro has expressed interest in partnering with our local partners in Rio.

I am in seventh Heaven

Four years ago during a visit to the villages in Northern Karnataka, a daughter of a Devadasi (forced into sex work by religion and society )told me she wanted to study engineering. I asked her what stopped her from pursuing her dream and she said she didn’t have the funds to enroll in coaching classes for the entrance examination. We made arrangements on the spot and supported her exam prep coaching and four years in engineering school. Arranged for additional coaching in English and software testing.

A week ago she was hired by HP Bangalore.

When they came to meet with me in Ghataprabha in Belgaum district, both daughter and mother were in tears. Due to financial pressures, the 17 year old was being forced to marry a 60 year old man. When I asked her what she wanted to do, her reply “I want to study engineering” blew me away! Rest is history.

One of the other girls who successfully completer our training is Puja. She graduated with a Master of Social Work Degree and is employed by our partner Prajwala in Hyderebad. Here is Puja’s background.

When I met eighteen year old Puja, she told me her computer knowledge makes her an equal to everyone else out there and she had just spoken in front of 150 delegates at a social work conference. When I asked her what kind of job I should get for her, she replied "I don't want a job, I want to Go to graduate schoo! I wept.

( Due to security reasons, I am unable to post photos of the two girls mentioned above) 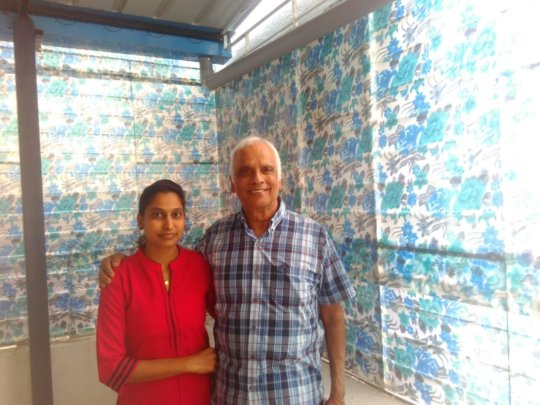 all across India to increase awareness about the plight of trafficked children and sexual violence against them.

On the evening of Wednesday October 11, Guinnes Book of World records issued a certificate to the Kailash Satyarthi Children’s Foundation for organizing the largest child xafeguarding lesson at the DAV Centenary Public School in Jaipur, Rajasthan.

I participated in the march in Jaipur on October 12th along with 300 rescued children.

The closing ceremony of the march was held at the official residence of the President of India on Monday October 16th.

Manisha, trafficked at 10 and rescued by Sunitha Krishnan of Prajwala (ASSET India partner) was seated next to President of India Mr. Ram Nath Kovind and Nobel Laureate Kailash Satyarthi. Manisha shared her terrible story of sexual violence and her commitment to help others trafficking victims. President Kovind thanked Mr. kailash Satyarthi on behalf of the entire country.

in Bangalore, India. Sujata daughter of a sex worker is a mentor and math teacher at this shelter. Sujata completed her engineering degree with full support from ASSET India Foundation.

‹ 1 2 3 4 5 6 7 8 9 ... 22 ›
WARNING: Javascript is currently disabled or is not available in your browser. GlobalGiving makes extensive use of Javascript and will not function properly with Javascript disabled. Please enable Javascript and refresh this page.