Afous Ghissiki: A Project to Promote Organic Agriculture in Guelmim 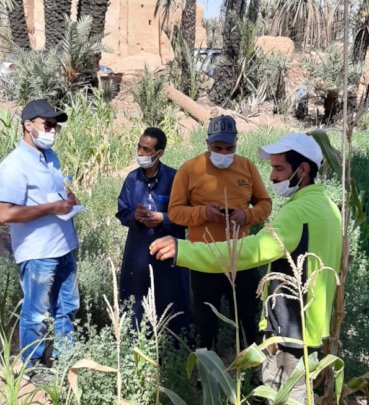 It was with great excitement that I hit the road to Sidi Ifni accompanied by Abdeljalil, HAF Field Manager, and Mustapha, HAF Driver to meet the Dar Si Hmad Association (DSH), our partner in the "Afous Ghissiki" project.

The Dar Si Hmad Association (DSH), created in April 2010, aims to promote local culture and develop sustainable initiatives through education and scientific ingenuity with communities in southwest Morocco. The association has a vision for enabling sustainable livelihoods and creating opportunities for low-resource communities to learn and prosper.

The Afous Ghissiki Project was launched in April 2020 and funded by the Bureau of Oceans and International Environmental and Scientific Affairs (OES) in partnership with the High Atlas Foundation (HAF) and the Daiat Nzaha Cooperative. The project aims to improve and upgrade traditional farming in two oases, Ougoug and Tighmert, in the Guelmim province, and one pedagogical farm in permaculture in the Sidi Ifni province. The project accomplishes this by training beneficiaries in techniques and radical water management for sustainable and ecologically based future product marketing.

During our journey, we visited the Tighmert Oasis in Asrir commune, Guelmim province, where we met the people served by the project. Fourteen farmers have benefited from five workshops about organic agriculture, water management, climate knowledge, soil composition, and farming techniques like grafting and pruning of trees. Besides agriculture, Tighmert Oasis is a touristic spot, so the inhabitants continue to suffer from the repercussions of the COVID-19 pandemic. Also, this oasis is threatened by water shortage due to the Fask Dam construction and the intensification of banana cultivation. Moreover, in August 2020, a fire of unknown origin broke out in the oasis and destroyed local crop.

We carried on our visit and went to the Ougoug Oasis in Imi N’Fast commune, Sidi Ifni province, to meet the people there who benefited from the project. Here, 24 farmers had participated in the same workshop series as in Tighmert.

In order to apply techniques learned during the workshops and help farmers diversify their production, 1,190 trees of different types (Argan, olive, fig, pomegranate, carob, and walnut), which had been raised in HAF nurseries and funded by ECOSIA, were distributed to almost 40 farmers in the two oases by Dar Si Hmad. Our visit to Sidi Ifni was an opportunity to monitor these trees, which are now growing successfully thanks to the workshops that DSH conducted with them.

In addition to the two oases, HAF has distributed another more than 6,000 trees to farmers in the Guelmim Oued-Noun region. Monitoring has shown that these trees are also growing in good condition.

After completing our visits in the two oases, we visited the pedagogical farm of Agdal Brahim, where new farming practices have yielded positive results. This farm was long abandoned and is now thriving.

The Afous Ghissiki project results demonstrate a significant impact, as it has promoted organic agriculture, ensured food autonomy and income generation, and encouraged family consumption of their own crop.

One of the things that I noticed during our eight-day journey in Guelmim and Sidi Ifni was that there are more and more initiatives by young people who are creating associations in order to improve the living conditions of the rural population in the Guelmim Oued-Noun region.

A special thanks to Dr. Bargach, who welcomed us very warmly, as well as to Mr. Ouafegha who facilitated our visit to the two oases. We are grateful to the whole Afous Ghissiki project team whose efforts have been incredible. 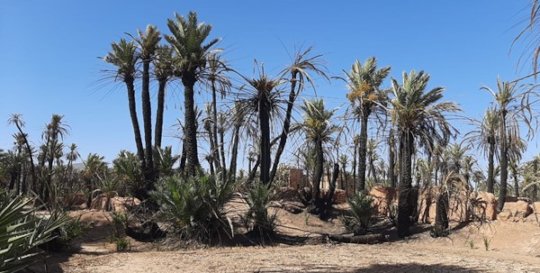 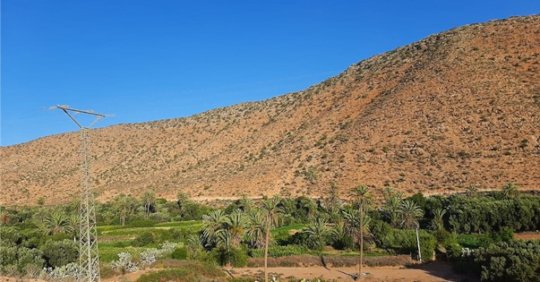 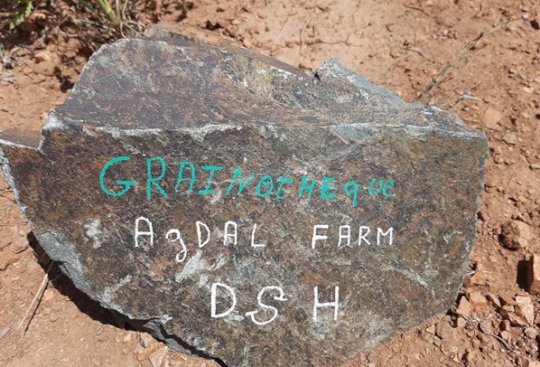 Community Tree Planting Will Lead Morocco Into the Future 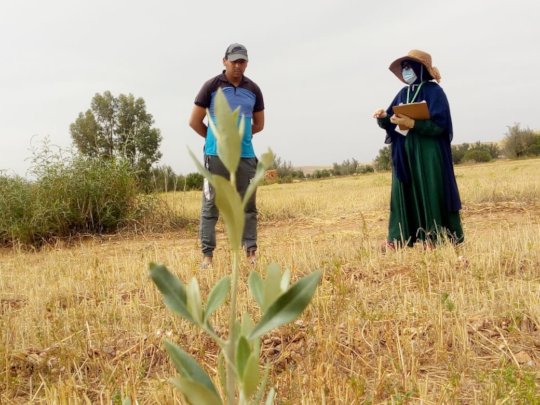 The terrain of Morocco provides the opportunity to achieve tremendous agricultural and environmental results. The High Atlas Foundation (HAF) plants fruit trees across the country with rural communities. In 2021, HAF-community collaboration has planted 700,000 trees of nine fruit varieties, with 6,000 farming families in 39 provinces. In addition, 1.6 million seeds in 13 nurseries located in eight provinces have also been planted.

Rural communities are transitioning away from traditional crops such as barley and corn and are placing more emphasis on planting fruit trees and taking advantage of medicinal herbs and spices. The work being done by HAF is driven by the people themselves, which is why community tree planting has been a priority project.

By involving community members through the participatory approach, HAF assists Moroccan families in generating greater revenue and food sources, but also propel themselves into a sustainable future. With that said, community tree planting has many other benefits that will only further the sustainable development Morocco seeks to achieve.

The first and most evident benefit of tree planting is its environmental impact. Climate change has gained traction in recent years as an issue that will be irreversible if people continue with their harmful practices. Mass tree planting is one way in which climate change can be combated as it has the ability to absorb solar energy and reduce air temperature which has been steadily rising. A key factor in climate change is greenhouse gases which are released through activities such as driving a vehicle, operating certain equipment, and the burning of fossil fuels.

Luckily, trees are adept at reducing the amount of CO2 and harmful toxins that exist in the air. These are the two main ways tree planting can be beneficial to the environment - but it also assists in the improvement of soil and water quality, another major issue that Morocco faces. Ultimately, tree planting is an activity that has undeniable environmental benefits which should be taken into account by Morocco as well as other nations.

It is important to acknowledge the social benefits of community tree planting. Planting trees with other members of the community reinforces a sense of belonging and a degree of empowerment that radiates beyond environmental responsibility. This increases social capital and can lead to improvements in other areas of Moroccan society such as education, employment, and infrastructure.

It has been shown that when people are included and participate in activities such as this, they are more likely to branch out and provide better insight to their needs, which is a tremendous asset in development. Overall, the value of community. is instilled in those who are asked to come together and perform a task that will provide positive results for the greater good.

Community tree planting has proven to be beneficial to human health. The World Health Organization has tagged Morocco as moderately unsafe on regard to air quality, as its mean particulate matter concentration is approximately three times higher than the globally accepted average. Poor air quality correlates with respiratory and chronic illnesses such as asthma, which can be fatal. The presence of more green spaces, which includes tree nurseries, decreases the prevalence of mental health issues. Community tree planting can also contribute to the solution of issues exacerbated by the COVID-19 pandemic, such isolation and lack of human interaction.

Depression and anxiety are diseases that are known to be curbed by the access to green spaces, as well as the participation in activities in such areas. Some have cited the increased appearance of certain settings as a result of tree planting to be a motivating factor in their improved wellbeing. This bodes well for the provinces of Morocco that have been working with HAF, and it can inspire other regions in Morocco to pursue the same course of action.

In conclusion, community tree planting has benefits that affect various factors of human life. For Moroccans, the project will lead to improved social capital and environmental conditions, as well as the potential to increase the biodiversity of the nation. Sustainable development is the primary mission of HAF, and community tree planting exists as a catalyst for Morocco’s future success. As of right now, the plan is to grow 10 million fruit trees by 2025. Surely, the future is bright for Morocco as it is on the verge of a beautiful breakthrough. 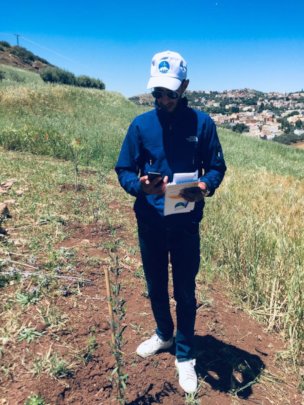 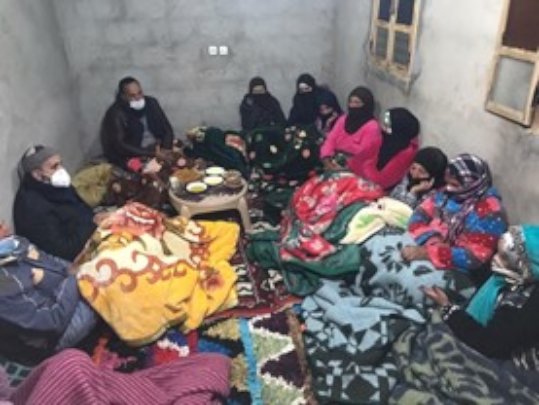 As time progresses, we see more people glued to technology and staying indoors for hours on end. Many people don’t even go outside to take a walk or experience the green spaces in their backyards; however, research has shown many benefits to utilizing green spaces both physically and mentally. Michelle is an environmental epidemiologist with the US Forestry Service, who focuses her research on exactly this: fear in green spaces and their usage in the modern-day.

In her April 9 presentation on Trees, Safety, and Violence, she discussed the fear factors that contribute to decreased use of green spaces even with their countless benefits. One of the biggest fears people have in relation to the use of green spaces is drugs and bringing their families to a place where inappropriate, dangerous activity may be occurring. One quote added from a parent was, “You have to create activities and you have to do it at a safe time and you have to do it in a safe way because nobody wants to bring their children out anywhere and have to duck bullets,” in reference to perceived high crime rates in green spaces. Also, an interesting fear that many people have is trees, and they say that it doesn’t allow police and security officers to be able to have a clear view of the area; thus, they are against the planting of more trees and shrubs. These fears drive people away from utilizing spaces that have such positive effects on mood and should not be a place of fear for any reason.

When the entire world was turned upside down by the pandemic last year, public interaction dwindled, leading to higher rates of poor mental health. The use of outdoor green spaces can significantly help with the burden of a pandemic for many reasons. Green space use during COVID-19 leads to decreased transmission rates, improvement of physical and mental health, and a better experience throughout the pandemic as a whole. In teenagers, the use of green spaces and outdoor nature can lead to decreased stress levels and additionally elevated mood after passing by any green space. Kondo discussed the way outdoor spaces can benefit all of us during such a tough time, but some people do not have access to these safe green spaces. Thus, communities should be encouraged to transform certain underused spaces into green areas.

The United States Farmer-to-Farmer Program  (F2F) focuses on prolonged maintenance of environmental resources including green spaces. It was authorized by Congress in 1985 and funded through Title V of Public Law 480. It aims to improve conservation and sustainable use of natural resources, expand agricultural sector access to financial services, and strengthen agricultural sector connections overall. It is a program for sharing the knowledge and skills of farmers around the world.

The High Atlas Foundation, a US-Moroccan nonprofit organization, benefited from 27 expert volunteers in 2017-18, who assisted more than 20 cooperatives and farmers in four provinces. Between July 2019 and March 2021, HAF completed 29 Volunteer assignments with 50 agricultural cooperatives in three targeted regions - Marrakech-Safi, Beni Mellal-Khenifra, and Oujda. In Morocco, green spaces can be utilized not only for personal use, but also for community gathering spaces for planning, empowerment, and a sense of community.

The Farmer-to-Farmer Program is just one step towards conserving and creating green spaces that everyone can access. Additionally, by utilizing volunteer experts in the field, a community of people interested in sustainability can come together to work towards safe, accessible green areas. With more community programs like F2F, green spaces can be conserved and hopefully become spaces people are not fearful of. In Morocco, these spaces can be utilized not only for personal use, but also for community gathering spaces for planning, empowerment, and a sense of community.

‹ 1 ... 5 6 7 8 9 10 11 12 ... 226 ›
WARNING: Javascript is currently disabled or is not available in your browser. GlobalGiving makes extensive use of Javascript and will not function properly with Javascript disabled. Please enable Javascript and refresh this page.