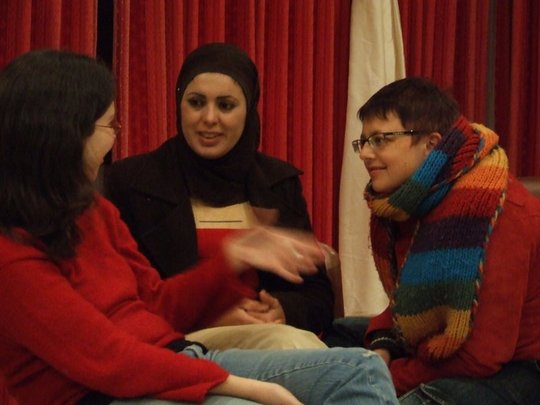 The Binding of Abraham's Son

The 23rd Israeli-Palestinian retreat of interfaith encounter took place on the 4th and 5th of December in the tranquil Everest Hotel in a remote area in the outskirts of Beit Jalla and very near Har Gilo, a location which made it easily accessible for both Israelis and Palestinians.

The retreat focused on "The Binding of Abraham's Son" and was jointly organized by the Interfaith Encounter Association and the Hope Flowers School, with the generous support of the program Networking for Peace of the Canadian Government, to whom we are all most grateful.

The special success of this retreat manifested itself even before we began in two ways. First it was exciting to realize that so many of the participants were new faces. If this was for a minute sources for concern about how well will the conversations go, it soon became a source of further thrill when we saw spontaneous friendly conversation already starting among people from both groups who arrived early.

The structured part of the program opened with introducing the two organizations, the program and the guidelines for the retreat. Throughout the retreat – it was jointly facilitated by Ms. Ghada Issa of the Hope Flowers School and Dr. Yehuda Stolov of the Interfaith Encounter Association. Participants were invited for a social game that led to their grouping in groups of six. In the small groups they each introduced themselves in greater detail than in the plenary. Then they were asked to share stories in which someone sacrificed something for them. The conversations were so lively that we had to invite the groups to continue them over dinner.

After dinner we had a social evening with joint singing in Arabic and Hebrew, joint informal chats and a few nargilas.

The next morning started with the presentation of Rabbi Yaron Durani of the Jewish perspective of the theme. The Binding is extremely meaningful in the Jewish tradition. The request of God from Abraham was especially terrifying from three aspects: a. A true believer is prepared to sacrifice himself for God, for example – in case when he is forced to act against the Torah. But it is much more difficult for him to sacrifice his son. And even more so when this son is the future of the whole nation; b. Abraham struggled his all life against idol worshipers who were sacrificing their sons. Now when he is already old and have a large crowd of followers suddenly he is told to act as an idol worshiper! This is a real danger for his life project and vision as well as to his faith; c. There is a contradiction between the promise to build the nation through Isaac and the command to sacrifice him. A regular person would recognize the contradiction and choose one of the options, perhaps the one more comfortable for him, while questioning whether the order to sacrifice his son did not come from the Satan. But Abraham was the greatest believer so he believed in both sides of the contradiction. Finally Abraham did not sacrifice Isaac as God stopped him in the last minute – because this act is immoral. But why then that God ordered him to do that? God did so as the believer should be willing to sacrifice anything for God. Willing, but not actually sacrificing as the Torah rejects totally the possibility of human sacrifice. In the first days of the Jewish year we blow the Shofar, made of a sheep's horn, in order to remember the Binding of Isaac and that God both wants us to be dedicated to him but also to refrain from sacrificing humans.

As we always do – following the short presentation, participants went back to their small groups (now bigger groups – each composed of two groups from the previous evening) and shared their thoughts and feelings following the presentation.

The next session was dedicated to the Muslim perspective, first presented by Ms. Fadila Eswed. Abraham faced many tests and difficult ones. Abraham saw a vision in his dream that he should sacrifice his son. He told Ishmael and consulted with him – without ordering him to accept. But his son the believer replied: you do what you were told to do and I will be obedient. Abraham went with Ishmael and prepared everything for the sacrifice but when he put the knife he brought to Ishmael's neck – the knife didn't work. Then God spoke to Abraham through the angel Gabriel: you proved to be a true believer and withstood the test. God sent to Abraham a sheep to be sacrificed instead of Ishmael – a big white sheep from Heaven. This was the day before the Feast of the Sacrifice (Eid el-Adha) and therefore it became part of the Suna to sacrifice a sheep before the Feast. As a reward for his withstanding the test – God gave to Abraham another son: Isaac, who was born later according to the Muslim tradition.

Again – participants retuned to the groups and continued their conversations until lunch.

After lunch we were privileged to host Eyal Davidov of the King David Drummers, who brought with him many drums and led a joint drummers' circle for more than an hour.

Before sunset we gathered to have the Jewish prayers for the receiving of Shabbat, followed by the Muslim and Jewish evening prayers, each conducted in it traditional way, facing opposite physical directions (as is the situation south of Jerusalem) but directed to the same God. With the similarities and the differences – this was a powerful experience for many participants who have never before witnessed the prayer of the other.

Following the prayers, the groups wrapped up and we all convened to the concluding session. Brainstorming about themes for future retreats the group suggested to focus on prayer, on Jerusalem and on different Biblical figures who are also mentioned in the Koran (Moses, Joseph etc.) Concluding the structured part was a short summary by each participant. For most of them this was their first encounter with the other and many noted how powerful and positive it was and how much they desired to have more such encounters.

The evening continued with dinner and informal conversations until late at night. 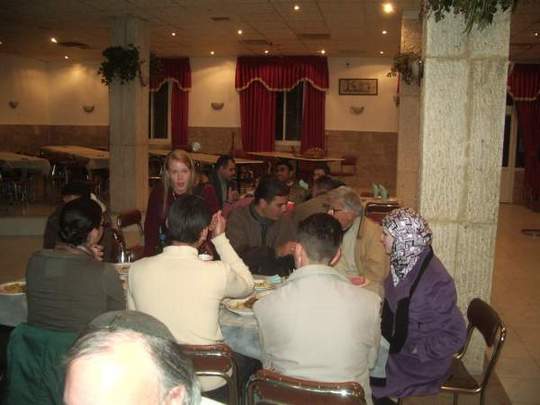 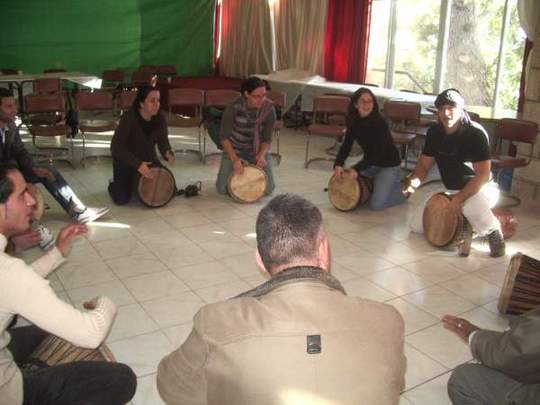 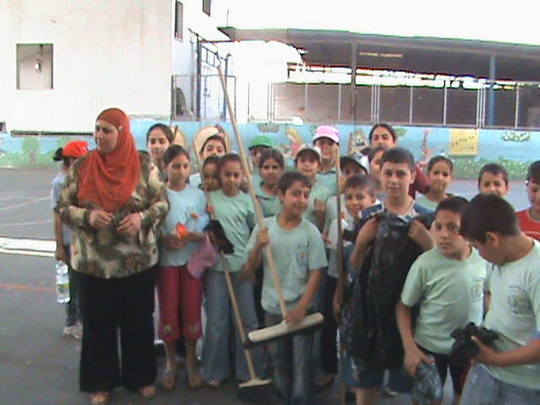 Preparing to go out

Out of the basic assumption that it is important to keep our environment clean, the environmental leadership of the two schools, A-Sallam and Kalanit, held a joint environmental day.

5th graders of the two schools went out to the streets and cleaned them. Then they entered the cemetery, cleaned it and tidied the plantation in it. In this day that took place on April 24th, took part some 150 students from both schools.

At the end of the day the students distributed papers for the parents, with guidance for the parents on how to increase awareness for preserving their environment clean. 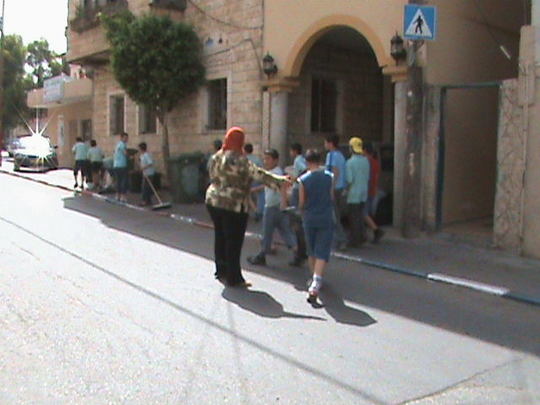 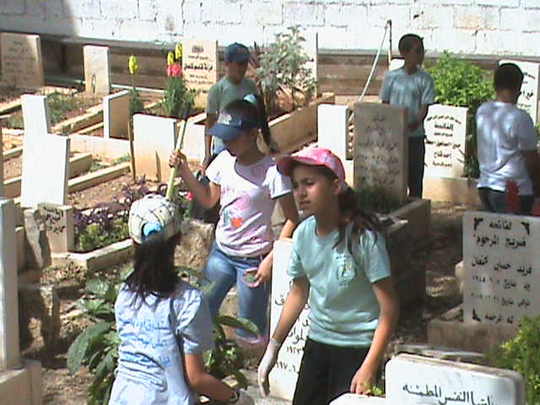 On Sunday, March 9th 2008, the 6th grade students of Kalanit School in Karmiel hosted their peers from A-Salaam School for a joint experiential activity around the theme of "Emotions", following the general events and the war in the south. This activity was in the happy spirit of the month of Adar that started on that day, as it says: "When Adar enters – happiness is growing".

First we met in the classrooms. The children were happy to meet again their friends from last year. They set in circles and heard explanations about the course of the day. Then we started with "Balloons of Emotions" – a personal page that we created based on the Hosen program, to identify the students' mood and emotions. To our joy, all students – from both schools – marked the first balloons and explained that the chose them because they were happy to be part of this activity. The conversation took place in both languages (Hebrew and Arabic). The students of Kalanit were especially happy as they could practice their Arabic. The events of the day were not brought up, although in the morning the students shared their educators in their feelings following the massacre in the Yeshiva in Jerusalem.

After joint breakfast in the classroom and joint activities during the break, we turned to the activity of "Mood Balloon". This is creative work around balloons: the kids chose the color of their balloon and designed it according to their feelings. We made chains of emotions' balloons to decorate the class for Purim – a mixed chain for each class.

After the creativity activity the boys' soccer teams from both schools competed. The game took place in a respecting and respected way. The girls from both schools cheered the game. The referee was the teacher Nader Taha from A-Salaam School. When the game ended with the victory of the Kalanit team, the girls took the field for a dodge ball game. In this game the referee was the teacher Ayelet Yihya from Kalanit School and the girls from A-Salaam won.

To end the day we took a joint excursion to the nearby Galilee Park. The guiding was given, in both languages, by the geography teachers Amir Lazar and Nader Taha. We viewed our joint Galilee and learned about the scenery formations. We used this excursion as a summary for the joint Geography theme of the Galilee. During the excursion children from both schools were walking hugged together.

The encounter ended with social games organized by the children and we fare welled with lots of satisfaction and wish for further encounters.

‹ 1 ... 51 52 53 54 55 56 57 58 59 ›
WARNING: Javascript is currently disabled or is not available in your browser. GlobalGiving makes extensive use of Javascript and will not function properly with Javascript disabled. Please enable Javascript and refresh this page.