Circle of Light and Hope- 4 encounters

The Circle of Light and Hope Interfaith Encounter Group met once more online (due to coronavirus restrictions). This time, it was decided to discuss a topic that relates to our current reality:  Can there be spiritual value to sickness and suffering?

Our Muslim speaker presented his perspective on how spirituality can help and be enhanced through suffering. He mentioned the biblical account of Job, and stated that God created  suffering and the emotional power to conquer it.

The Jewish speaker also mentioned Job, but affirmed her personal point of view is closer to a saying in Masechet Avot: “we don’t know why righteous people suffer”, but can decide what to do about it. She also related a personal experience and left us with a poignant question: Is God suffering with us?

The group discussed that suffering may sometimes make us better, but we would prefer to live without it. Participants also discussed that when someone is aware of his own mortality, it makes him do things in a different way. Suffering also often makes us realize who we truly are, and who our real friends are.

It was suggested that the topic for the next encounter should be the spiritual value of happiness and health.

The Circle of Light and Hope met online through Zoom with 12 participants.

In light of the current coronavirus crisis, instead of sticking to a specific topic, we checked in with everyone and talked about how each of us is dealing with this difficult period. Still, there were some very interesting topics surrounding the corona crisis. We spoke about how to deal with people who refuse to comply with the instructions regarding social distancing in the name of religious practices, such as public prayers. We also discussed how we are all receiving contradictory information, and deliberate misinformation, and how to select our sources.

Unfortunately, many of our Muslim friends could not join, as they do not have access to Zoom. It showed again the imperfections of this means of communication and the inequalities it highlights. Still, we felt it was meaningful to continue to be in touch throughout this troubled period.

The Circle of Light and Hope interfaith encounter group met again with 12 participants, including some new ones. The topic chosen for this encounters was “Miracles”.

The Jewish coordinator gave a brief presentation of two Jewish approaches to miracles. The first draws on the saying “the world conducts according to its usual habit”. Maimonides teaches that one should believe that God creates nature and its laws, and miracles were “preprogrammed” or “built-in” the laws of nature. A second approach, which actually drinks from Islamic sources, is that there is no such thing as fixed natural law, but rather creation is renewed by God every single second- meaning, if something falls, it is because at that very moment God is creating gravity laws. According to this view, there is no essential difference between the natural and the miraculous, since God “He renews, in Hiskindness, His creation every day anew”. Some of the miracles mentioned in the Torah are Abraham and Sara having a child in their old age, the splitting of the red sea and the resurrection of a child by Elisha.

The Muslim coordinator gave a presentation explaining that the Koran brings the same miracles as the Bible, in addition to Muhammad's miracles, which include: flying to Al Aksa and the splitting of the moon.

After the presentations, some interesting topics were raised and discussed: Are there miracles today? To which a Jewish participant answer: If you believe every story you hear, you’re a fool, and if you believe none of them, you are heretic (a quote by Rabbi Lichtenstein). Another Jew answered she doesn’t believe in miracles at all, and asked if one could be a Muslim without being a believer. The Muslim participants diverged in their answer, and one of them mentioned that a “strong Muslim” had to believe.

The group then debated the topic for the next encounter, which we look forward to.

The Circle of Light and Hope group met at Gush Etzion with 13 participants: 7 Jews, 1 Christian and 5 Muslims. We decide to have an open session in which people could ask whatever they wanted about the others’ religions, and of course some very interesting topics were raised. A Jewish participant asked if there was a Muslim concept to End of Days or Messiah. Muslim participants answered there is such concept- the Ahmehdi, someone who will make people repent and go through the right path. Muslim participants asked about Jewish customs such as rocking back and forth when praying, and more interestingly, why Jews do not consider Mohammed as one of their prophets. This question led to an extended conversation about particularism vs. universalism and how historical contexts influence the development of religions. Muslim participants also asked the Christian participant regarding different Jesus’ images across the world. Last, we all compared what participants considered the main prayer in their religion and its contents- the Shema Israel for Jews, the Surat Al Fatiha for Muslims, and the Holy Father or Priestly Blessing for Christians. 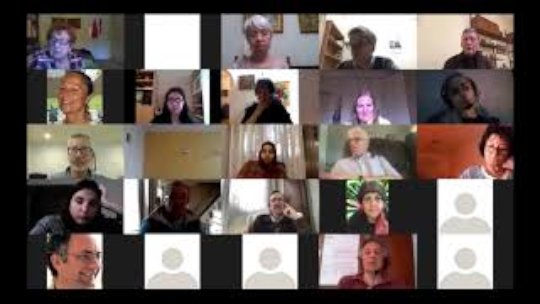 During the intermediate days of Passover, ,the Interfaith Encounter Association held an Interfaith Passover Celebration on Zoom, which consisted of a demonstration of a Jewish traditional Passover Seder with interfaith guests and insights.

After brief introductions, our host, Ms. Hanna Yaffe, led us through the order of the Passover Seder, and explained the meaning behind its different elements. She started with the blessing over the wine or grape juice (which was toasted with a vivid l’chaim-to life!), and mentioned that the Passover Seder is generally celebrated with one’s extended family, something that would not be possible this year due to the coronavirus lockdown. Because of the current crisis, many Jews were able to identify deeper with the meaning of the Matzah, the flat bread of affliction, and the Maror, the bitter herb . She also briefly explained about other elements of the Seder Plate- the zeroa (meat bone), salted water, charoset (apple or dates paste) and a boiled egg.

Two interfaith guests - Father Russell McDougall and Ms. Fatima Amer gave inspiring insights on the connections between Passover motifs and their own traditions.

Father Russell spoke about the Christian significance of elements of the Seder- such as (flat) bread, wine and egg.. Despite a common idea that Jesus’s last meal was held on the Passover Seder, that is not a consensus among scholars. In any case, what is most important is that he makes use of the elements associated with the allegories of Passover: the affliction and subsequent redemption. In addition, the egg is generally associated the renewal of life and resurrection in Christianity.

Fatima talked about the parallels between the upcoming month of Ramadan and Passover. Just like Passover, in Ramadan Muslims thank God for His grace and salvation. It is also celebrated with gatherings (the breaking of the fast) around food, and with many guests and extended families. It is also customary to do an additional prayer during this month- just like the week of Passover for Jews. In sum, Fatima mentioned that all of these holidays- Ramadan, Passover and Easter- are expressions of our desire to connect to God and become better persons.

At the end, Hanna finalized the celebration by singing some traditional Passover songs.  It was a very meaningful exchange and uplifting experience of connection in a time of social distancing.

The whole evening was recorded and you are most welcometo watch it too.

The Corona pandemic causes great suffering throughout the world. Interfaith Encounter Association activists and its sympathizers around the world have decided to hold a joint interfaith prayer led by religious leaders from the Holy Land - a prayer for the good health of the whole of humanity.

The prayer was led by Sheikh Jamal Aloubra, the Imam of Rahat; Father Rafik Nahra, Vicar of the Hebrew-speaking Catholics in the country; Rabbi Yakov Nagen, Rabbi at the Otniel Yeshiva, and moderated by Carolina Frimer, Community Director of the Interfaith Encounter Association. The interfaith prayer took place through Facebook with 327 people from all over the world. The video of the prayer has since been viewed by many hundreds of other people and you are also invited.

‹ 1 2 3 4 5 6 7 8 9 ... 63 ›
WARNING: Javascript is currently disabled or is not available in your browser. GlobalGiving makes extensive use of Javascript and will not function properly with Javascript disabled. Please enable Javascript and refresh this page.