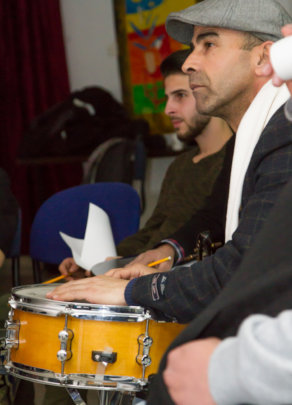 A new group is now being developed. The idea came from Yuval, a Jewish musician from Jerusalem, and Marwan, a Muslim musician from Abu Dis.

Yuval and Marwan know each other for a long time and have played together in the past. As they came to know about the Interfaith Encounter Association (IEA), they wanted to create an opportunity for more people - Jews, Muslims and Christians - to play and perform together. the intention is to aim for young audience, who will not be passively listening to the music but be inspired to meet new people and hold conversations while the music is being played.

We are now working to recruit participants for the group as well as appropriate spaces that will host rehearsals and performances. 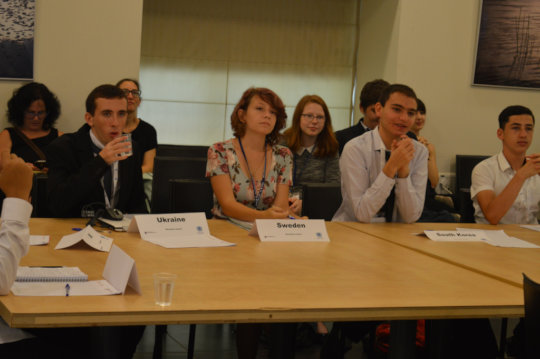 Some of the students

On Friday June 9th, we brought a small group to the Embassy of Taiwan to discuss Israeli-Palestinian peacemaking, and Taiwan's own history of reconciliation with China.

On Friday July 7th, we held a follow-up session with Yoni Eshpar from UNSCO, hosted once again at the American Embassy. Another 20 students joined, and following the discussion and Q&A with Yoni, and some words from US Embassy representatives, the students split into 2 groups to discuss what a post-agreement Palestinian state might look like, and how to address inequalities within Israeli society.

On Friday July 14th, a group of students was hosted at the Embassy of Cyprus, and spent two hours meeting with H.E. Ambassador Thessalia-Salina Shambos. We presented the ambassador with a bouquet of flowers in congratulations of her recently being named "Ambassador of the Year" by Israel's Ambassadors' Club, and spent two hours discussing the occupation of Cyprus and conflicts with Turkey and within Cyprus, as well as the Israeli-Palestinian context, and the role of religion. The Embassy gave all of the students a gift of a special book published on Islamic heritage sites in Cyprus.

Finally, to close off the summer with a bang, 20 fantastic students, from Daburiya and Sakhnin down to Gedera and Gan Yavne, all met at the Charney Resolution Center in Kfar Hayarok youth village for 2 consecutive fridays, July 21 and 28, to participate in an "Israeli-Palestinian Congress" with the Minds of Peace program. The first Friday the group met with Palestinian peers from Nablus and Jerusalem, and spent 5 hours on icebreakers and confidence-building negotiations. Because of tensions over the Haram al-Sharif (AlAqsa-Temple Mount area) situation, the second friday only a small number of Palestinian students from east Jerusalem came. We went ahead with our negotiations anyways, with some of our (Israeli) Palestinian students negotiating the Palestinian side, at times joined by Jewish students who were role playing. After another 5 hours of negotiations, we had two signed negotiations, and all of the students received special certificates. What was particularly interesting was that unlike most of the Israeli-Palestinian Congresses, we brought both Jewish and Muslim students from Israel, which made our group more representative, and added to our ability to build linguistic and cultural bridges. At the end of the program, 6 students: Zohar, Marsel; Fiona; Omri; Yafa, and Aviv, were announced as students chosen to travel to the European Parliament in October to present our program there.

Ten people joined in the Interfaith Encounter center of IEA, to launch the group of students from Herzog College and young adults from Bethlehem and Hebron.

During the introduction round participants pointed their desire for us to be together and do things together. Others stressed that most people here want peace. A few referred to the fact that unlike the English work "peace" – in both Arabic and Hebrew, "Salam" and "Shalom" are names of God. Here we need to bring in God in order to succeed.

As a way to deepen our acquaintance, participants shared positive experiences from encountering the 'other': one participant described a new student joining his class, who had an illness that made him look strange. At first this frightened him but once he got to know him they became good friends. One of the Muslims told us that this is the first time for him to meet Jews and that before the encounter he was afraid, but once the encounter started he relaxed. Another Muslim said that although he is used to meeting Jews who are leftists, he was afraid from meeting Settlers, but in the encounter itself he was positively surprised and from now he does not make distinctions between people and respects every human. One of the Jews shared how he was posted in the army on a roof in Hebron and after a while one of the neighbors came up with water, as a gesture of hospitality.

The general topic was “Kashrut and Halal.” The Muslims began with an explanation of the general term, of how “Halal” means “Permitted,” and “Haram” means “Forbidden.” I think this is a common misconception amongst many, because people outside of Islam usually associate “Halal” with food, as if it is a form of Islamic Kashrut. So we first cleared that up.

Then we directed the topic to focus more on food in general, since that was the intended topic of the meeting. From there they proceeded to explain different rules for slaughtering animals, such as how one must have the proper intent during the slaughter, how full decapitation is forbidden, and how one can’t kill an animal in the presence of another animal.

From there they went on to explain how you must bless “Rachmana Rachim” or “Bismila” before eating anything, and how if you forget the blessing then you missed your opportunity. We also spoke about how "Rachmana Rachim" is very similar to the Aramaic way of referring to God in the Gemara. They also shared some sources from the Quran to show where things came from.

Once they had gone on for a while, we had our turn to speak about Kashrut. I explained about the Torah’s prohibitions of eating certain animals, like many types of birds and bugs. Then I explained about the requirement for fish to have fins and scales. This sparked a debate between the Muslims if sharks were “Halal” or not. Then we talked about mixing milk and meat, as well as the hours which we wait in between meals. We also explained about wine, our slaughtering process, and about "trumot" and "maasrot". At the end we told them about dipping our dishes in the "mikva" (=ritual bath), and about blessings before and after eating. They were particularly interested in what exactly we say.

On the whole it was a successful encounter. We managed to get into a lot of tangents which help foster friendships to grow in the group.

‹ 1 ... 11 12 13 14 15 16 17 18 ... 57 ›
WARNING: Javascript is currently disabled or is not available in your browser. GlobalGiving makes extensive use of Javascript and will not function properly with Javascript disabled. Please enable Javascript and refresh this page.