A Recently Awarded School Gives Thanks 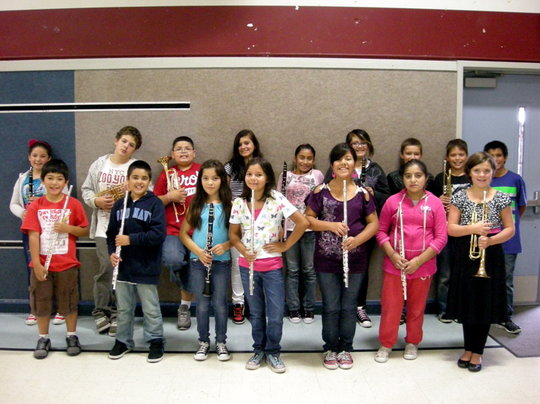 Below is an update from A. J. West Elementary School in Aberdeen WA. They were awarded this year and as a result their program has doubled in size!

I'm sending you a picture of the students that will be using the instruments that were donated to A.J. West in the spring [...]. We are so blessed to have received this grant in a time when it has become increasingly difficult for our families to afford to rent or purchase instruments. Despite the economic times and because of your generous donation, my beginning class has doubled in size! This year I am starting 33 students on their musical journey!

I appreciate so much the difference that good quality musical instruments can make in even a beginner's sound. Last year, I was able to lend some instruments to students, but they were in poor to only fair condition. I can already hear the difference in the sound of the class with so many instruments in excellent condition!

I am also sending a picture of a letter that a student wrote. Every time I read it, it makes a lump in my throat. This student came to me in the spring last year (in tears) and said that she was going to have to quit playing in band. When I asked why, she said that her parents could no longer afford to pay for her rental instrument. I had just heard from you about the status of the grant and I knew that the instruments were on their way, so I asked her to keep coming to class (even without an instrument). Just one week later, the instruments arrived and I was able to check one out to her! She is continuing this year as a second year student and making great progress. I know that without your help, this student would have been forced to give up something that she really enjoys.

Behind every smile in the first picture is a story like this, a story of potential that now may be realized because of your gift to our school. I don't know how to thank you enough for helping these students begin their musical life! 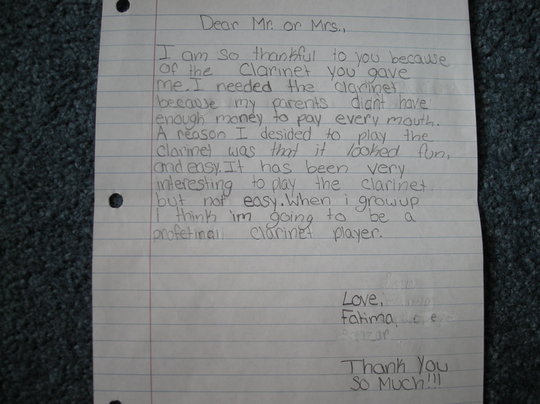 Letter from a student giving thanks 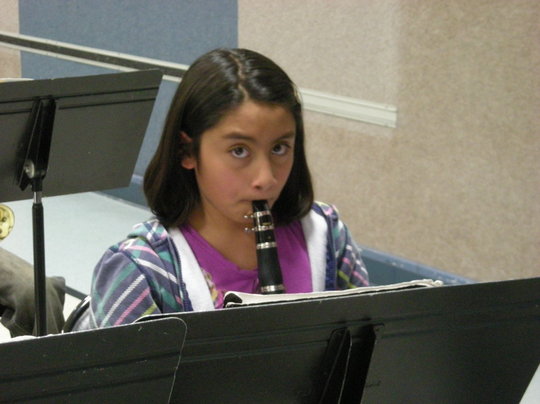 A Year of Impact 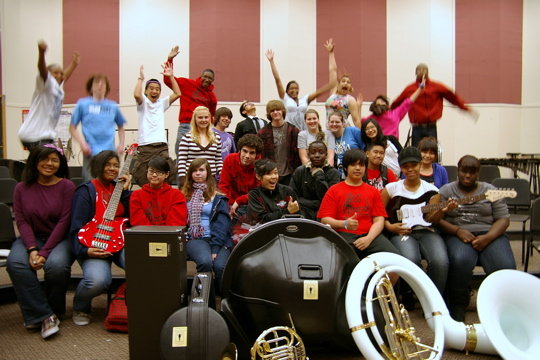 We are very happy to share this information with you - after all, without you we could not even begin to make a meaningful impact on so many kids' lives. Please find attached the PDF, "A Year of Impact," for a snapshot of our yearly activities and results. We hope you are as pleased as we are that together, we are keeping music alive for so many children!

Below, students find creative ways to thank the Foundation for the instrument donations awarded to their schools.

When I was young, I wanted to play.
In the school band, I dreamed of this each day.
I chose my instrument with great care.
The flute or saxophone, which did I dare?

Some sounded high, others were low.
I wanted an instrument that would help me grow.
I finally decided on one with great tone.
This was called the alto saxophone.

My teacher was kind, great and nice.
She taught me to play very precise.
We worked on scales, songs and more.
I tried out for All County and received high scores.

My appreciation goes out to my school organization.
I am so thankful to Mr. Holland’s Opus Foundation.
I play my instrument and have learned so much.
It’s amazing how many lives they have touched.

When the M.S. 158 music program first began,
There were more students than planned.
All the instruments were worn,
Students had to share Ms. Schecter’s French horn.

Everyone did their best
Not to look too depressed.
With what they had, they did what they could
But knowing the program might end was the only thing they understood.

Then, in April of 2009,
A light began to shine.
Angels flew across the nation
Giving us instruments from Mr. Holland’s Opus Foundation.

They gave us 14 instruments that were new.
It was an event no one wanted to undo.
Everyone smiled at each other,
Their music could finally be free from being a hostile.

Today, new instruments make 158 cool
And even influence Josh Groban to come to our school.
We’re winning awards one by one,
It’s like a never ending home-run.

All the concerts we have are a huge success
It’s all thanks to the instruments nonetheless.
Our music in NYSSMA has been raised to a level 3
It’s been hard, but when completed, people smile with glee.

But the main reason I love music in my day
Isn’t to take trophies and fly away.
It’s because I get to stop being so tense in my own heaven,
Otherwise called a place called B27.

Below find a link to a Song by Sehyn and Julia, Esperanza High School, Anaheim, CA (Awarded Fall 2002)