Four Sisters in the Same School

By Robbie Middleton - Coordinator of Sponsorships 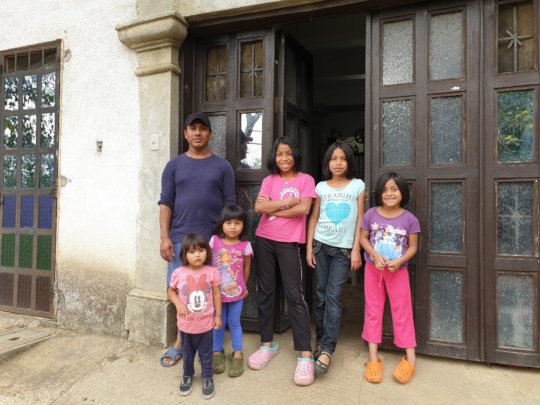 When Sofía joined the preschool class in our Dreamer Center School in January 2020, she became the fourth child in the family to study there. Three of her older sisters were already studying at the school; Anelis in fourth grade, Terecita in second grade and Naomy in first grade.

The family had gone through hardship the year before. In early 2019 the girls’ mother had been diagnosed with cancer and within two months passed away. It was a huge shock to the whole family, as the illness affected their mother so rapidly. Their father, José, was left to look after six girls by himself, the youngest of whom was only a few months old. Matters were complicated even more when the oldest sister, Daniela, decided to go to Guatemala City and live with her aunts rather than having the responsibility of caring for her younger sisters.

This situation left the family in dire straits, as José had to find work in order to pay the rent and put food on the table. He was able to find a job working as a waiter in special events, although this means that he has to work long hours and the children are often left alone or with their grandmother. It is 12-year old Anelis who takes care of them in the house, cooking and cleaning as well as ensuring that their homework is done.

At the school we have taken measures to support the family during this time. We accepted in Sofía early so that she could have somewhere where she was well looked after during the day. We also changed our school hours for the family so that José could pick up the children and take them home rather than leaving them to walk by themselves. Through our sponsorship program in the Project we have found people who are supporting the family, including a sponsor who is looking into building a house for the children so that their father does not have to work as long to pay the rent.

The girls all enjoy being in the school where they have lots of friends and are making good progress. It is important for us to provide a safe and welcoming environment where the children feel confident and happy. We have a psychologist available to work with the children in the Project to make sure that they are mentally healthy as well as physically, and our staff regularly visit the family to make sure that they are safe and well.

From Danger to Dreams 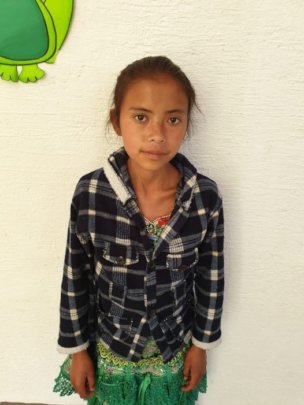 Sandra came to us a scared, timid, and forgotten young woman. Though 18 years old, she had the height, weight, and appearance of a little girl due to chronic malnutrition and neglect.

She was referred to us by the PGN (Guatemalan Social Services). Sandra’s father passed away when she was younger and her mother suffered from alcoholism and was unable to care for her, and so a month before she arrived at our Casa Jackson Hospital for Malnourished Children, Sandra was sent to live with a family that the mother knew to be looked after. This is not what transpired, however. The family that Sandra stayed with consisted of a mother, father and three children. Sandra was not treated like another member of the family, though. During meal times she was told to leave the room and the family did not share any food with her. Sandra told us that she was not given any food for a month and that every time she asked to be given some she was beaten. She was also beaten at other times for no reason at all. Sandra was also not permitted to leave the house and therefore had no means to access food herself. She told us that she survived on water alone.

When Sandra arrived at Casa Jackson, we had to adjust to be able to care for her. The first thing we needed to do was find a bed for her to sleep in as we didn’t feel that it was dignified to ask her to sleep in a crib like the other children. We reached out to another non-profit called El Amor de Patricia that runs a Bunk Bed Project to ask if they would donate a bed for Sandra to sleep in while staying at Casa Jackson. They were more than happy to oblige and delivered it the next day. This was an important part of showing Sandra that we valued her as a person by making sure she would be comfortable.

Sandra has spent nearly 4 months with us in Casa Jackson and in that time has made incredible progress. She has been on a special diet to help build her strength and it has been working extremely well. Sandra told us that when she was staying with the previous family, she would dream about eating frijoles and chicken and so we make efforts to incorporate that in her diet. She has also been a huge help with the other malnourished children in our hospital by feeding and looking after them. This has given her a sense of belonging and a feeling of self-worth.

Another important part of Sandra’s recuperation has been to build her self-esteem and confidence. Sandra never had the privilege of going to school when she was younger and is unable to read or write. We organized adult learning classes three times a week to help Sandra develop her skills. Sandra has told us that even after she leaves Casa Jackson, she would like to continue to study so that one day she can become a teacher. We will ensure that we do everything we can to turn this dream into a reality. Furthermore, we have been teaching Sandra important skills that she can use in the future. Sandra worked with some volunteers to learn how to sew. She used her newfound sewing skills to make a bag.

The kind of neglect and abuse Sandra experienced is just one of the many ways slavery exists in the world today. Sandra went from a vulnerable situation living with her alcoholic mother, to a more dangerous one living with a family that outright neglected her basic needs. If not for PGN, Sandra may have fled her home to escape the horrible treatment she was subject to and found herself living in the streets, exposing herself to being victimized by human trafficking. Instead, Sandra found her way to us. We have made it our duty to nourish, educate, and counsel her, and provide the stepping stones towards a brighter future. 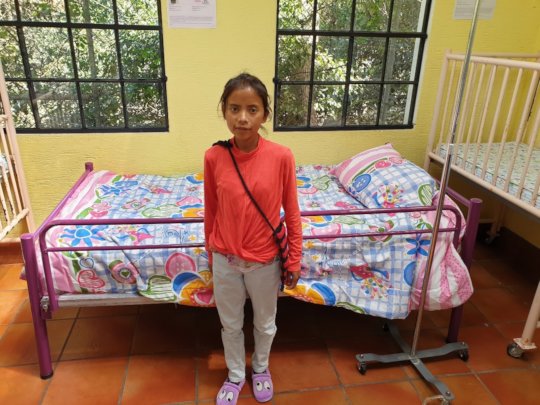 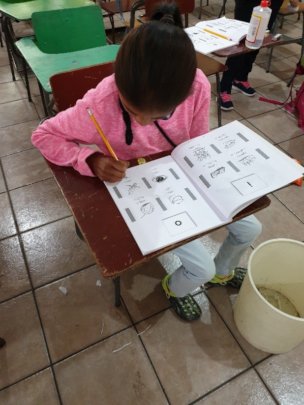 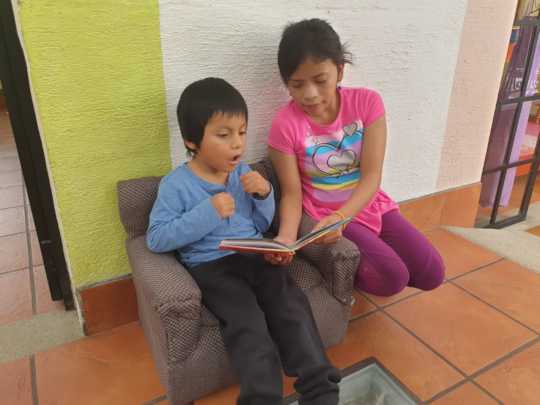 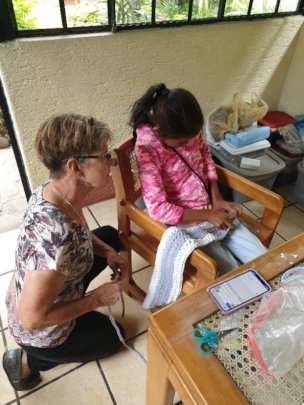 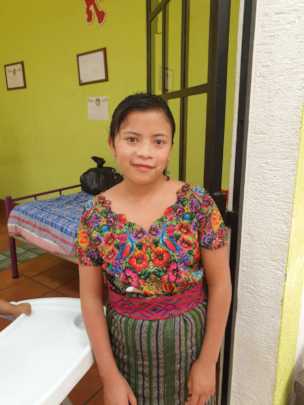 Tools for Women's Empowerment and Success 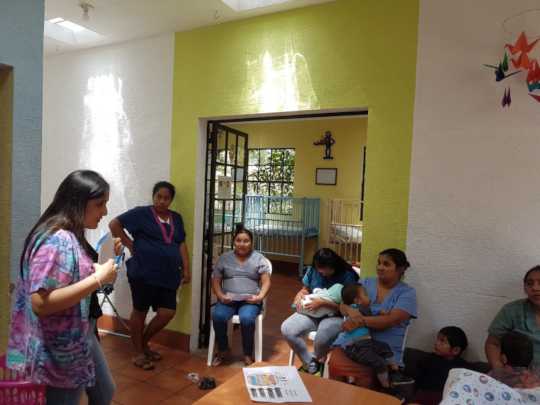 The current state of affairs in the world due to the COVID-19 pandemic has not afforded us the ability to run the weekly workshops with large groups of women we had hoped for, but that hasn’t stopped us from educating them in other ways on topics of nutrition, dental hygiene, and sustainable practices.

When we receive malnourished children and their mothers into our Casa Jackson Hospital for Malnourished Children, one of the key components to ensuring a healthy future for the babies is to educate the mothers on proper feeding during their stay. We have a dedicated nutritionist who spends much of her time showing the mothers how to feed and what to feed their children through mini workshops. She prepares menus, responds to questions, and redacts materials that the mothers can take home with them once they have been discharged after their child’s recuperation. These materials include vital information about food preparation, formula preparation, methods of feeding, and essential nutrients that are key to a child’s cognitive and physical development. For breastfeeding mothers, this knowledge of good nutrition for themselves ensures the children will receive the necessary nutrients through their mothers’ milk. This education serves as a building block for a child’s development and prevention against illnesses that malnourished children are susceptible to contracting.

We have also been able to run workshops on dental care and hygiene. This is a topic that is often under-addressed but nevertheless key to a person’s overall health as many health problems can arise as a result of sub sufficient oral care. With the help of the dentist and dental assistant that staff our clinic, as well as our international volunteers, we were able to run multiple workshops for mothers of our project about proper oral hygiene, effective brushing, gum treatment, and teeth-damaging foods and drinks for themselves and their families.

In late February of this year, one of our service teams gave sewing classes to some of the mothers and young women we support. One of these young women was Sandra, an 18-year-old girl who came to us severely malnourished for a girl her age. She has been recovering with us in Casa Jackson for four months now, showing tremendous strides in her weight and overall confidence. Always a big help with the baby patients, Sandra has also benefitted from one on one classes that other children in school receive and sewing classes. She showed great joy in learning how to sew bags, shawls, hats, and other items. The skills and confidence she has been developing in her time with us are a telling sign of a bright future for a girl who, less than 6 months ago, was living on her own and not able to feed herself. 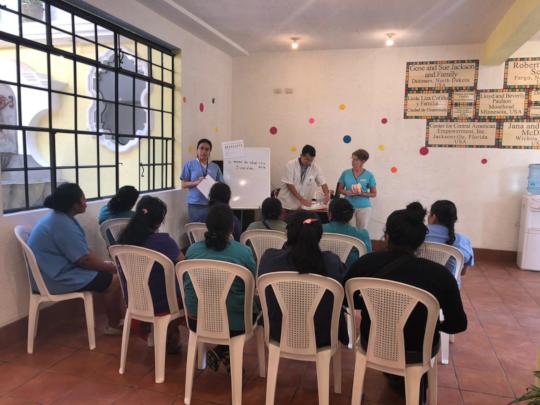 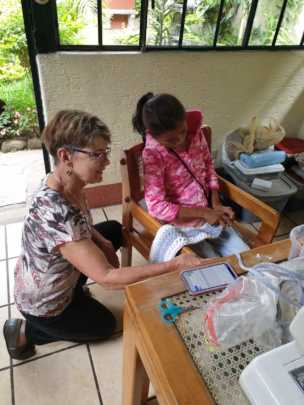 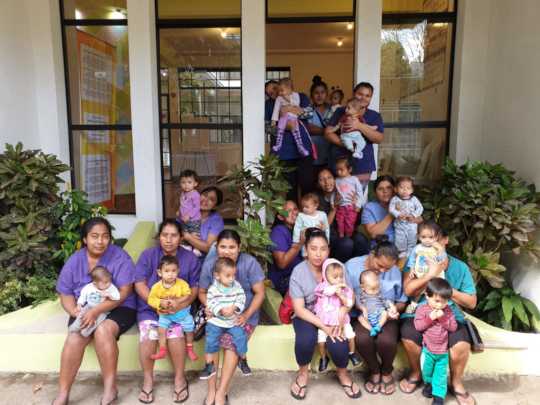 ‹ 1 ... 5 6 7 8 9 10 11 12 ... 74 ›
WARNING: Javascript is currently disabled or is not available in your browser. GlobalGiving makes extensive use of Javascript and will not function properly with Javascript disabled. Please enable Javascript and refresh this page.