Storytelling in An Unprecedented Time 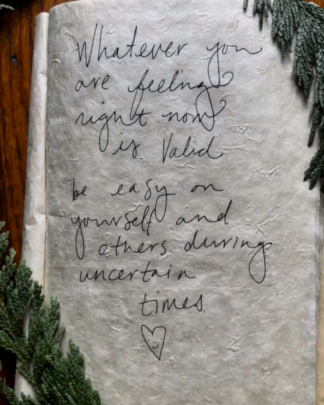 We won't wax poetic on the issue that is impacting our global community at this time. Our collective, like everyone around us, is taking extremely preventative measures and sheltering-in-place. Because of this, our ability to travel, train, and congregate has been unforeseeably paused but we remain vigilant in our commitment to sharing lived experiences.

Now, more than ever, we need Storytellers. We need to hear the voices of our young folx who are seeing their senior years, campus support networks, physical protests, and levels of access reduced significantly. Our young people have been/are being mercilessly displaced from dorm rooms and host families, and outside of the realm of academia, are experiencing an unprecedented world as the rest of the global community is, but with less power within it.

We need to continue investing in our young media makers, writers, creatives, and those continuing to organize on behalf of other young folx, those of us who qualify as their olders and elders, and all those yet to come. We are making the conscious decision to not delay our efforts, but rather find ways to efficiently move our work online and create dynamic stories that will continue to showcase the grassroots work, mutual aid, community service, and real issues our young people are dealing with.

For those among us who aren't considered youth anymore, our program will continue to uplift and amplify the experience of Indigenous, Black, people of the global majority who are feeling this global shift and crisis more deeply than most.

We send our smoke to each of you for protection and ask that you all continue to join us in staying home. If you know folx traveling out to national parks/landscapes at this time, please remind them that they are treading on Indigenous territories and posing a threat to our communities and themselves.

With love and in service to our world, one another, and our oral traditions,

From the Tar Sands to the Borderlands: Bringing Solar Energy to Indigenous Migrant Housing 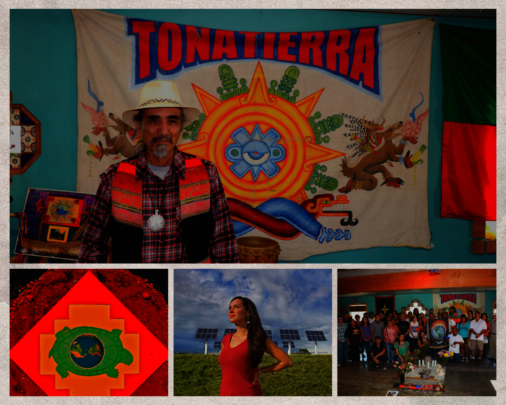 During this time of escalating threats at the US-Mexico border, an opportunity to make a measurable impact for asylum-seeking Indigenous families has arisen. Our storytellers have formed a partnership between Seeding Sovereignty, Sacred Earth Solar (in the Canadian tar sands and Cree led), Tonatierra (a Phoenix-based cultural embassy of Indigenous Peoples) and we are eagerly working to share their story about providing renewable energy to many members of Indigenous migrant communities and relatives beyond the colonial border.

To create and sustain a Cultural Embassy of the Indigenous Peoples that will support local-global and holistic indigenous community development initiatives in education, culture, and economic development in accord with the principles of Community Ecology and Self Determination.

In our many meetings with our esteemed comrades and frontline community warriors, we've learned about the heart of those uplifting the aforementioned mission. In 2018 when people traveled en masse from South and Central America north in caravans to Mexico and the US, many were fooled into believing that if they simply turned themselves in at the border, they would be processed and allowed the ability to enter the country to be protected from horrific violence at home, as well as to do work they were eager to do. They weren't aware of the hellish nightmare that would receive them.

According to Tupac Enrique Acosta, founder and coordinator of Tonatierra, the influx of migrants from southern countries flooded facilities in Arizona. Through great means, people who were trying to stay in the country had to prove that they had family in the country, friend or family willing to pay for bus tickets to get their relative(s) where they needed to get for their next court hearing, and proof that everything had been purchased and paid in full before they were strapped with ankle bracelets and released onto the streets.

Many people had no place to go, Tupac said. So Tonatierra threw open its doors. During the peak of the caravan migration, the center housed nearly 3,000 throughout a 3-month period with most people staying no more than 24 hours. They came to rest, eat, and better understand what an undertaking they were engaging in and what system had corrupted their need for asylum and humanitarian aid.

After visiting the center, we noticed that it is in a state of immense need, though it is obvious that every fiber of the building is deeply loved. Tupac assured us that the work being done to add a bathroom with a shower in it to better accommodate the needs of travelers was being prioritized, but something greater struck a chord. Solar power. With plans for longterm renovation and eventual rebuilding, Tonatierra is looking to modernize their space with renewable energy, and what better place to try than in the valley of the sun?

Tonatierra expects that in the next several months another great influx will take place and they aim to be better prepared to receive guests. The stacks of cots and rolled sleeping bags await guests, and the garden out back, freshly planted in the tradition of the Akimel O'odham peoples, brings the promise of growth, no matter what comes in the new year.

Our storytellers are currently working on a short video to assist Tupac and Tonatierra with fundraising to bring solar panels to the center. Another video is in pre-production to document the process of bringing the project to life once funding is completed. Stay tuned in the new year!

Iheedn/thank you for supporting us in 2019. 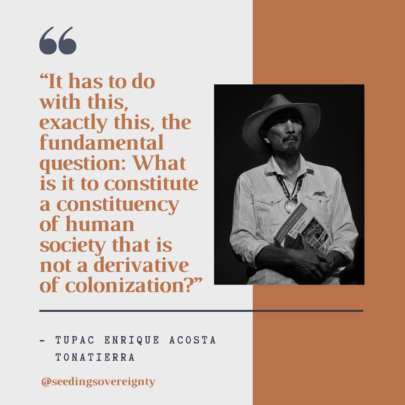 Aloha from Mauna a Wakea! 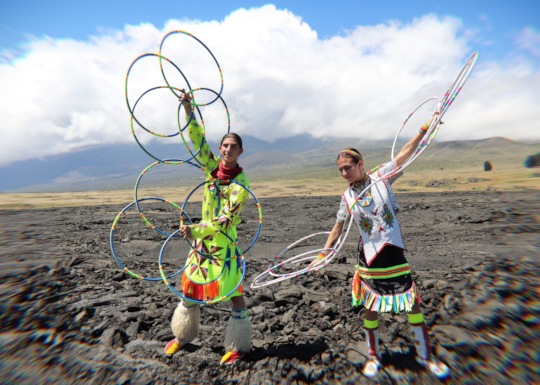 We're finally home after weeks at the base of Mauna a Wakea in support of the descendants of the Sovereign Kingdom of Hawai'i trying to prevent the Thirty Meter Telescope (TMT) from being constructed. At the invitation of our beloved comrade and adopted auntie Pua, our collective was able to send a small delegation to lend support to protectors on the ground.

After arriving in Hawai'i, we were welcomed into the Pu'uhonua (a place of refuge) o Pu'uhuluhulu by our extended family and native Hawaiian relatives to join in daily protocols, hula offerings, meles, prayers, classes at the Pu'uhuluhulu University, and to be among their people in solidarity with the ever-growing mauna community. In a true spirit of kapu aloha (acting with only kindness, love, and empathy), we were guided by the teachings and vigilance of the kupuna (ancestors/elders), the dedication of our neighbors and fellow community members, and were reminded daily by the keiki (children) present why it was we stood like pillars, safeguarding such a sacred place.

A video is forthcoming, detailing our time supporting our fiercely loving relatives. In the meantime, please enjoy these photos and a small story of one plant-loving tutu in particular...

Last week this tutu brought us to tears. Having visited the mauna 4 times, she told the Kupuna that every time she came she felt guilty for not having a gift to offer during the daily protocols. She also expressed that her mobility was extremely limited and that she’d been hitching rides to get to camp. After she spoke, she set down the microphone and painstakingly pushed her walker forward. She announced that she didn’t have much, but she did have a garden and had spent several days making her way around her property to dig up the most beautiful of all her plants. That day, we witnessed her return to the mauna with them all as gifts. Many of us come from so little and the most humble hearts fill ours right up.

It is our fervent hope that we are able to produce a video that encapsulates as much of the love that we felt on the mauna as we did listening to our grandparent radiate reciprocity, even in its most humble form. We ask that you keep our relatives on the mauna in mind this coming week and stand tall like mountains for whatever moves you.

Iheedn/thank you for being on this journey with Storytellers. We so appreciate you all. 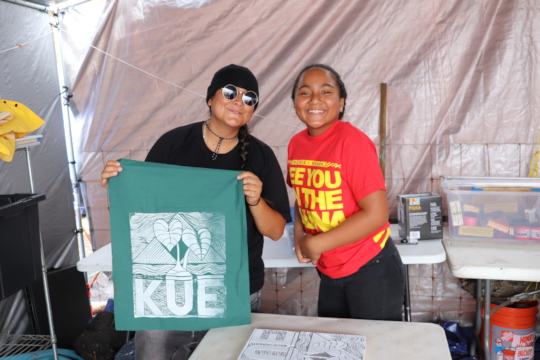 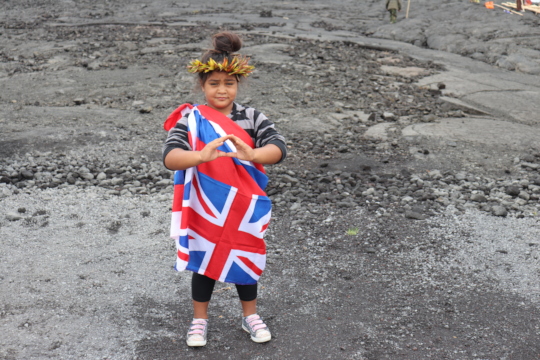 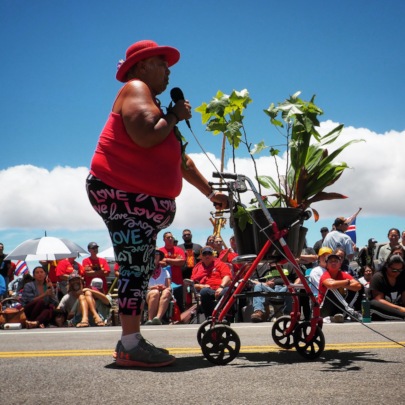 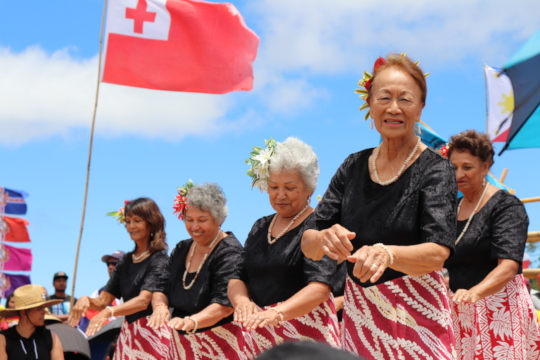 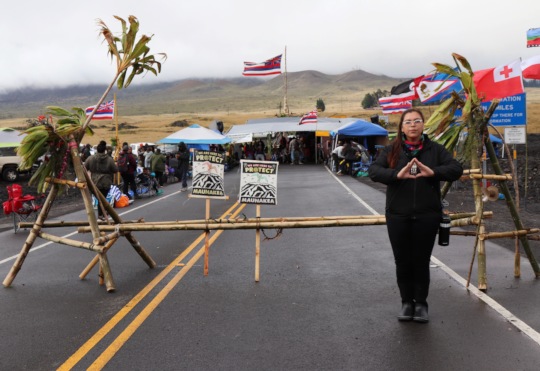