Ebola...Floods...& Yet Hope Remains at a School

A Brighter Tomorrow for Africa

The sad, sad news is that the Ebola crisis continues in Sierra Leone.  They have yet to be declared Ebola free and ask all of you to please send positive thoughts and energy over to that beautiful country.

Other sad news: the capital – Freetown – just experienced a terrible flood and, as a result, many people now have no homes.  The flood victims currently are currently living at the national stadium waiting for the Government's to relocate them to safe and permanent areas in the Western Rural District.  A

But ... our feeding programme’s continued success is our good news. The children are always in school and ready to work. The daily school feeding has made our children stronger, healthier and more energetic to work hard in school. I am also happy to report that there has been no major sickness among the pupils.

The BTA supply from Nursery through the Senior Secondary School continues to have a great impact on our children’s academic life because they are having a good nutritious meal when they are in school, thanks to people like you.

Our programme is feeding over 900 children from Nursery School to Junior Secondary School age. Here are some stories of our beautiful students:

Every day, she walks eight miles by foot to come to and from school. She usually comes to school with an empty stomach but she gets good food now at school every day and it has improved her life. She is now learning more at school, because she is able to concentrate better.

The serving of BTA to children, like this ten year old girl in Class 3, has been helpful, because she personally likes eating BTA and it sustains her until she gets home to have a daily meal with her family in the evening. She is proud to say that she never goes home with an empty stomach.

He told  a sad story about his life. He is one of four boys in his family. His mother and father are farmers. They hardly get enough food to eat because of the difficult life their parents are living.

One day, a friend in their village who was attending the school told him about the BTA food in school. He said to him that every day in Mallory Jansen School supplies them food to eat. He secretly told his mother to tell his father that he would like to attend school in Ngolala. The mother wondered how she was going to tell her husband about Eddie’s decision of wanting to attend school. Eddie could not wait on his request made to his mother. Instead, early in the morning, he followed his friend that was attending COTN School.

After searching for him in the village, his father came to the school during lunch time. He met them eating food that was served to his friend. From that day, his father decided to send him to school and registered him in COTN’s Mallory Jansen Memorial School in Ngolala.

Eddie’s story became an interesting one. He started eating good nourishing meals daily. His academics began to improve as time went on. His personal health also improved, and he was healthier than the time he was in his village not attending school.

According to him, the BTA food is very useful for every school child that is attending school in Ngolala. They are very grateful for the BTA programme and hope that it will continue as it has a great impact in their learning at school.

She was admitted into Mallory Jansen, where she has done very well academically. She is currently in the primary school. When asked how she is coping with her schoolwork, she says one of the reasons she is able to learn and focus is because the help she is getting through the food that is provided each day in school.

She further went on to say that the BTA has nourished her body and makes her very strong and active in her class. In the morning, she walks for nearly half a mile to come to school with her friends. She is happy and says she wants to become a doctor after she completes Secondary School in the future.

Having an Impact in an Ebola Burdened Country

A Brighter Tomorrow for Africa Foundation

When we last provided a report to this wonderful group of generous donors, we talked about how much of a toll the Ebola outbreak was taking on the people of Sierra Leone we adore.

Things have improved … there are fewer cases reported now than in a long time.  And as a result – our children wereable to return to the school at which we then began again to provide them breakfast and lunch.

As you’ll recall, because of the outbreak of the disease and the declaration of a public state of emergency, the movement of people from one place to the other was thwarted. Household members in the Upper Banta and Lower Banta Chiefdoms in the Moyamba District and Bumpe Chiefdom in the Bo District (the area in which BTA works) were mandated to stay in their villages which prevented children from going to school where they were being provided their meals.

In order to address this, we changed our model and brought food to the villages so the children would not go without the nutrition they so desperately need.

This went on until mid-April.  Now, as we mentioned above, they are back at school and they are now able to take their meals as they did before the Ebola outbreak and the declared state of emergency.  The schools were completely disinfected and cleaned. Health talks were initiated in our schools to ensure that our children stay safe and healthy; the children have adopted extremely good hand washing habits and conversations about how to prevent the spread of the disease continue.

For this of course, we are all incredibly grateful and grateful to you for your support.  Here are some sentiments expressed by the people for whom we provide in Sierra Leone:

On behalf of the entire school children and staff of COTN – SL we wish to tender our since gratitude and appreciation for all your donations to the children of Sierra Leone in particular children of the Mallory Jansen Memorial Schools.

You have stayed with believing that these children will someday transform nations. The Ebola Disease has seriously posed untold hardship to children and their families. We therefore ask for more  support in ensuring that school attendance of children are maintained, drop-out rates reduced and certainly improve the cognitive and learning abilities of children.

Be encouraged to continue the good work of faith as we strive to raise children that will someday become agents of transformational change in their communities and ultimately this nation. With this we say thanks to you, your family, friends and all the well-wishers and supporters of BTA.

We mentioned in our last update we had identified an orphanage for children whose parents have died of Ebola.  When parents die in Sierra Leone, the tradition is that the children are taken in by family and/or residents of the village.  This however, is not happening when the kids are “Ebola orphans.”  People appear to be afraid of them.  So Sierra Leone has had to open a lot of new orphanages.

BTA therefore extended its work to provide funding for food and medical supplies to one of these orphanages, located in Kenema … an area hard hit by the epidemic.

Our intention is to continue to provide for this orphanage and we encourage you to please continue your financial support to BTA in order to help us be able to do this, and continue the feeding program.

Thank you again for everything.

Helping Children in SL During a Difficult Time 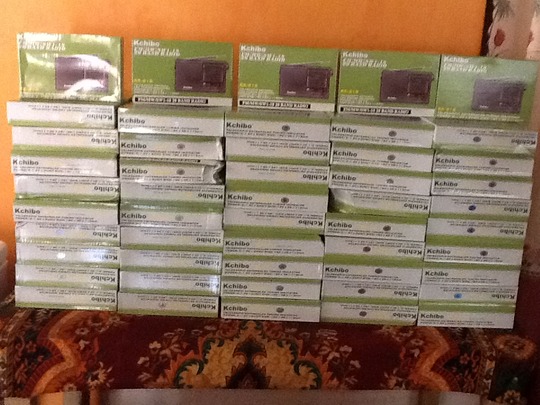 A Brighter Tomorrow for Africa (BTA)

Focusing on Children in Sierra Leone

At a Devastating Time

But things have been VERY challenging for us because of Ebola. I know you are all aware of just how horribly this monster of an epidemic has affected West Africa … and certainly in Sierra Leone.

It is flat out heartbreaking. But BTA has responded in ways of which we can all be proud.

The children have been quarantined in their villages due to Ebola. So we have done the following:

We identified an orphanage for children whose parents have died of Ebola. When parents die in Sierra Leone, the tradition is that the children are taken in by family and/or residents of the village. This however, is not happening when the kids are “Ebola orphans.” People appear to be afraid of them. So Sierra Leone has had to open a lot of new orphanages.

BTA has provided funding for food and medical supplies to one of these orphanages, located in Kenema … an area hard hit by the epidemic.

The Distribution of the BTA food to our children is a big blessing to Children of the Nations organization ever since the Ebola outbreak. This has always helped in developing the holistic life of our children in sustaining their lively hood. They are always praying and so excited whenever this food is distributed to them.

In the distribution period the parents are grateful for all that Aunty Sarah Armstrong and other donors are doing for their children. They are also praying for God’s showers of blessing on whosoever is helping in their resources for the education of their children.