Living in a country where human rights are not respected makes it impossible for LGBT youth to enjoy fundamental human rights. Expulsion from School, rejection by family, lack of basic needs, such as meals, medical care, clothing and a permanent home has become normal in their lives.  Hundreds of youth struggle to survive but surrounded by homophobic police officers, suffering rejection from their parents, they also have to struggle to stay healthy.

Living on the streets and the constant battle to become successful in life ads to the daily struggle without access to quality education, medical care and family support,

As part of the Usalama shelter, 12 LGBT youth receives medical care in the best hospitals in Dar es Salaam, eat three meals a day, have a home to live. As support, the project staff provides encouragement and counseling to help them deal with the struggles they face in life, even access to skills and training is provided. All with the hope of alleviating  poverty and dependence.

Due to the political environment in the country we are now changing from running a shelter which has been targeted by the authorities to home based support, 6 youth have been adopted in families and they are living a happy life. We are also in negotiations with a partner who is willing to help support the adopted youth. The big challenge is finding families that are willing to adopt LGBT youth but also the capacity to recruit more youth in the project.

Sijaona`s Story: "My name is Sijaona was happily living with my family in Morogoro but one day my brother saw me kissing my friend and he rushed and told my father that he saw me kissing. My father called me and asked me if I was gay but I denied because I was afraid  of what would be next, then my father told me that if he learns that I`m gay that will be my last day to live, I really got terrified but did not realize what my father had in mind. My father told my brother to secretly follow me everywhere I go after two weeks my brother saw me hugging my friend then he went and told my father again the same story. My father bribed a police officer and told him to lock me in and charge me robbery so that I may die in prison.

Fortunately my mother learned about the my father’s plan, he went to the police station and bribed another police officer and helped me out, then my mother gave me money and told me to go far away from  home and begged me not to go back because my life was in danger.

I travelled to Dar es Salaam, three days later I was arrested but this time I was charged with loitering and spent seven days in the police cell. There was not one to bail me out, on the eighth they released and told me to go back home. I could not go back because I knew I was going to die if I went home.  I went back on the street met many street boys taught me to smoke and drink, they then asked me to lived with the in a small room where they lived. They told me that the only way to survive was through selling sex (became a sex worker) I joined the group but life has never been good for me I hate going to clubs every evening.

I learned about a shelter went there and asked them to let me stay but they told me, that there is no room because there are many people. I really need a home to live".

We are not attaching any photo because os security reasons,the government has ongoing efforts to subvert LGBTQ individuals and supporters

We are always fighting for what matters most to the LGBT youth in Tanzania: the right to have a home, access education, medical care, free from persecution, rejection and neglect. Sometimes the right simply to live, not to fear for their lives

This year specifically, we are seeing the increase of violation of LGBT rights where many youth are getting on the streets but our services are limited, for the last 18 months we have been able to serve 12 LGBT youth offering temporary shelter, meals and sponsorship to obtain skills.

But in some other contexts, spaces for expression of our services are on the contrary shrinking, with increased social harassment acting to silence and end our good work. Now in most cases victims (LGBT youth) have asked not to disclose information about them for security reasons.

Our goal is to continue providing the basic needs but now we are doing it a different way, by finding families that accept LGBT youth to adapt them which will limit the number of the youth we can shelter but will increase the security of these victims.

We have already identified five families that are willing to live with LGBT youth and our job will be to contribute to their living expenses which are a good deal. This will reduce our project running costs by 90%

Through our fantastic energy and creativity which our team is using to protect LGBT youth and end homelessness, it is more than ever urgent to increase the capacity and resources of LGBT Voice to efficiently serve these poor youth.

On 1st July we will be launching a national campaign to create awareness about effects of hate and promote equal rights for all, it is our hope that this campaign will play a big role in changing people`s mindset about homosexuality

A coment from Latifa,

I am 37 and a single mother of 3 children and do love my children very much, I wonder how a parent can reject his/her own son because of his sex orientation, I know we are in a world where people do not want to understand but judge them based of the first sight. I love everyone in this world and ready to adopt one gay boy and live with him in my house as my son, I`ll give him an opportunity to live with my children and grow together as a family my God help me.

I thank these brave people who decided to set up this organization that cares for unfortunate young people, they need our support for their good work. 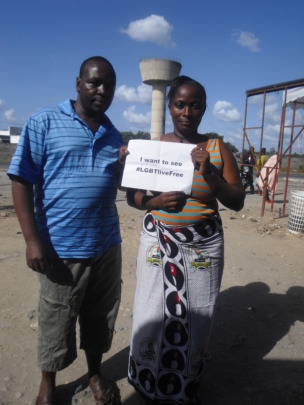 We would like to thank you for being part of our activism and also excited to bring you updates from Tanzania,

Since September 2015 LGBT Voice started engaging in the Universal Periodic Review (UPR) process by making a submission and then started seeking support from the delegates,we sent emails with our recommendations and also held one to one meetings with a few diplomats and also made calls to some Embassies before the session was held.

The 25th Working Group Sessions were held on 9th May and Tanzania received SOGIESC recommendations. This is the great work that our organization made The next step is to meet with our government and explain to them why it is important to accept these recommendations.

We have also started mobilizing and regrouping LGBT activists across the country so that we can have a well coordinated activism system that will be effective and successful.

To commemorate the International Day against Homophobia and Transphobia on the 17th of May, we held an event in Bukoba and shared released recommendations to the government for implementation: “The recommendations are based on the nature and extent of LGBT rights in Tanzania”.

The aim for sharing these recommendations with activists  was to create awareness and allow them to use the recommendations as a tool for drawing the attention of decision makers, media, the public, opinion leaders and local authorities to the alarming situation faced by lesbians, gays, bisexuals, transgender and intersex (LGBT) people in Tanzania.

I kindly request you to continue supporting our work because the situation of LGBT rights in Tanzania is alarming and there are no resources available now, we still need to rent an office for our head quarters in Dar es Salaam and support three new offices in Arusha, Mwanza and Mbeya regions.