Let me begin by expressing my gratitude for the extraordinary support from our donors in the course of a year packed with daily challenges. It means so much to LGBT Voice to know that so many caring, generous supporters like you have backed us.

There’s no question that everyone is “all-in” on this unprecedented effort to fight for our freedom so that it lives up to its promise. When LGBT people are discriminated and aren’t represented and included in all sectors we all lose out.

Every person in the United Republic of Tanzania regardless of gender identity and sex orientation has a right to live free. But some homophobic politicians do work hard to deny us that right; Ministers make homophobic statements discriminating LGBT individuals from the life of the country, governors threaten to arrest LGBT people and their followers on social media, police officers arrest and detain LGBT people without proper charges, service providers deny LGBT people to access public services but there is no legal protection provided to us .

That’s why we exist to fight, defend and protect the general wellbeing of LGBT people so that we are well represented and no one can deny the LGBT people their fair share of resources available in the United Republic of Tanzania

2019 has been full of accomplishments for the LGBT community in the United Republic of Tanzania, and all of them are thankful to you! Here are some accomplishments of 2019:

1. We were able to offer emergency services to LGBT individuals who were displaced such as temporary shelter, meals, medical care, legal services and also relocation to safer places.

2. We continued with training on security, documentation of incidences of violence and reporting, 46 individuals were trained in Tanga and Mbeya regions

4. Established partnership with a Brazilian organization that will be offering on site volunteers

I could not list all the accomplishments but only listed the major ones, as you all know the fight for equality takes time to get there but we are not resting till there is full equality in the United Republic of Tanzania.

I`m calling on you today to continue standing with us and with LGBT community. Especially in this time of the year when we need to keep the doors of the organization open. Let`s dig deeper for courage and stand taller for one another, we need your support to have an a safe and permanent office space. 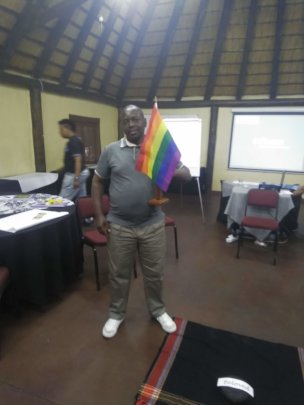 I would like to extend our gratitude to our supporters, friends, allies and well-wishers who stood with us and gave us the opportunity to write an LGBT history in Tanzania that will never fade

This day is a time for all of us to reflect about the meaning, importance and need for human rights. It is an occasion for the government and people of Tanzania to re-commit themselves to the spirit and letter of the Universal Declaration of Human Rights to which we are a signatory.

We started this struggle  on the  27th September 2009  with one goal of fighting for  dignity and Justice for all of us, which  is especially important for the LGBT community in Tanzania particularly in the wake of increased  government sponsored backlash and resistance, which have resulted in mass hateful uprisings, direct harassment, violence intended to silence activists advocating for the rights of lesbian, gay, bisexual and transgender in Tanzania. These violations deprive sexual minorities of the dignity and justice guaranteed to all peoples under the Universal Declaration on Human Rights and the Constitution of Tanzania.

As we celebrate ten years of existence , the LGBT community in Tanzania recommits to working towards a more inclusive and tolerant society that will ensure that every Tanzanian lives in peace and with dignity, regardless of sexual orientation or gender identity. We emphatically stress on this day that LGBT rights are human rights and not special rights.

In light of this the LGBT community denounces the government’s complacent position and continued refusal to accord LGBT Tanzanians equal access to the human and civil rights every other Tanzanian is entitled to under the Constitution, and for continuing to make same sex relationships criminal.

It is LGBT VOICE`s fervent belief that the promotion of human dignity shall remain hollow unless we transform our social and political attitudes to eliminate hate and ensure tolerance for diversity.

May God bless Tanzanian and all the LGBT in Tanzania?

September would be the month for us to celebrate our 10th anniversary in the struggle for #EqualityinTanzania, but we are not going to celebrate because we still have a long way to go before we get into celebrations. It would be great if our supports can celebrate for bringing us this far, we could not be here without you.

The outputs are a literature review, a formal research report that highlights the taxonomy and tactical options for legal advocates.

Advisory Group:
We have developed an advisory group - two members from each of the research regions makes up the advisory group to help inform the questions, translation of materials and source interviewees.

At least 6 interviews have been conducted in three regions of Tanzania mainland, including human rights organizations and diverse SOGIESC advocates and other individuals with key insights into or experience of resistance and backlash.

We learned that LGBT Voice Tanzania cannot walk alone in this long journey to advance equality, diversity, education, and justice for LGBT people in Tanzania and decided we are going implement our activities while we work with humanitarian and development actors and we work alongside diverse sexual orientation, gender identities and expression and sex characteristics aka LGBTIQ+ communities and groups as they strengthen their capacity, advocate for their rights and engage with humanitarian and development actors. LGBT Voice Tanzania will provide a range of services including: participatory research, program design and implementation, policy and practice development, and training.

We now have to pour massive amounts of resources into this fight, because we know it’s the right thing to do and that it's the only way to break the strongholds of Homophobia and Transphobia in Tanzania. But to sustain this level of activism, we need your special support.