The Importance of Transportation in Recovery 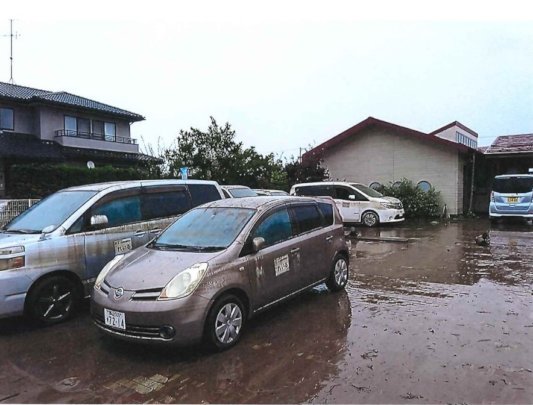 On October 12, 2019, Typhoon Hagibis struck the Pacific coast of Japan. Up to 25 million people were affected by the storm and more than 4,000 people were initially evacuated to over 120 shelters. Overall, the deadly storm damaged infrastructure, caused power outages and disrupted water services in 12 prefectures across Japan, and also left 27,400 hectares of flooded areas. In response to the storm, International Medical Corps partnered with the Association for Aid and Relief Japan (AAR Japan) to help communities recover and rebuild.

Together, our teams are helping children with disabilities access facilities to learn social skills through play after school and during special events, such as seasonal activities and weekend field trips. We are supporting intergenerational programming to give their caregivers extra time to provide for their families. Intergenerational programs provide a space for different generations to come together, share experiences, accomplish mutually beneficial goals and foster relationships. AAR Japan uses intergenerational programming to give the children an opportunity for hands-on experience and celebrate the traditional ceremonies, which are hosted by the elders.

Following the impact of Typhoon Hagibis, the vehicles used to facilitate these critical services were damaged beyond use. Yuga, a fourth grader explained his experience to us, “I was scared and worried during the typhoon because there was lots of rain and strong winds.” The staff at the facility told International Medical Corps that they noticed many of the children were more cautious and anxious after the typhoon — some were too frightened to even go outside of their homes.

With the help of a generous donors like you, International Medical Corps is supporting transportation for the children to continue to receive essential services, despite the damage from Typhoon Hagibis.

With transportation supported by International Medical Corps, Yuga’s daily routine can begin to return to normal — “I am looking forward to new events,” he says!

Together with our partners, International Medical Corps is helping children with disabilities access intergenerational care and cultural lessons. We thank the GlobalGiving community for helping our team provide care after disasters like Typhoon Hagibis. 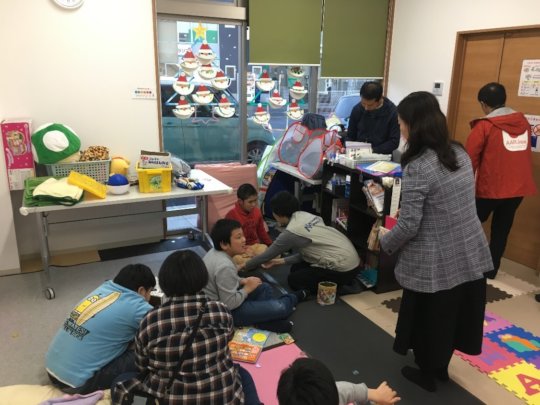 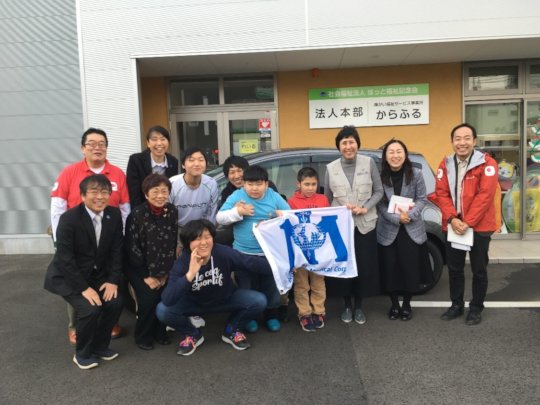 The Next Generation's Story 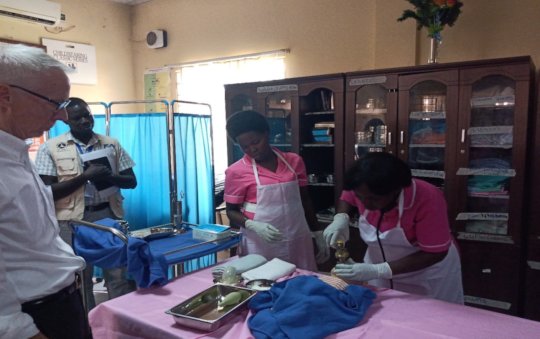 Abraham is a 25-year-old student who just completed his first year at one of International Medical Corps’ three midwifery schools in South Sudan. His path to the field of midwifery was not easy.

Abraham comes from a large family and he is the youngest of ten children. Abraham’s story begins in primary school. While he had a sponsor for a few years, “I supported my studies through small jobs,” Abraham explains. “I faced numerous challenges during that period, including the payment of school fees and scholastic materials, like textbooks, notebooks, pens and school bags as well as the seven miles’ transport from my home to the school.”

Nevertheless, he persevered with the support of his mother. His father served in the army during the war and was frequently absent for long periods of time. He graduated from primary school in 2012 and then faced the same challenges in secondary school; thanks to a partial sponsorship and part-time employment, he was able to find sufficient funds to pay for school fees, housing and transportation. In 2016, Abraham celebrated the completion of his secondary education.

He feels very privileged to be supported by a scholarship at the Kajo-Keji Health Sciences Institute. It came as a surprise. “One day, when I was visiting South Sudan’s Ministry of Health, I saw an advertisement for a scholarship for any qualified science student to apply in the fields of midwifery and nursing,” Abraham explains.

“Four months later, I was called for an interview after the list of candidates was announced,” he says, and began his studies in January 2019. This class of students just completed their first year and their second clinical rotations.

Many men are enrolled in the three-year midwifery program, and, across all three schools, 36% of the first-year students are men like Abraham. “I promise to do my part to reduce the suffering of the people of South Sudan by offering the knowledge and skills I have gained in this program,” Abraham assures us. “I will teach other students or people who need this knowledge and skills; provide basic health services like nursing care to patients in any health facility; and advocate for better understanding of sexual and reproductive rights and the consequences of gender-based violence for women and girls.”

International Medical Corps’ nursing and midwifery students come from different parts of South Sudan and have different backgrounds, including experience as refugees and with armed conflict. Most are enrolled free-of-charge so that they can focus solely on their studies.

While institutional donors cover most of the educational expense and school maintenance, the students and faculty have identified the need for solar panels to replace an aging generator, which has been causing disruptions in electricity in Juba; additional teaching aids like an electronic birth simulator at the Kajo-Keji school; and additional toilet facilities and a school bus for travel to clinical placements at Wau.

Donations, like those from the GlobalGiving community the next generation of health professionals, like Abraham, in South Sudan. 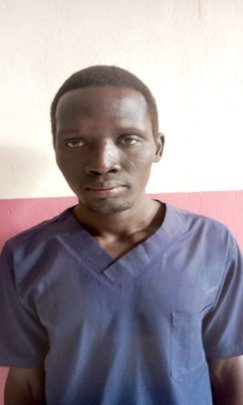 Abraham, studying for a Diploma of Midwifery 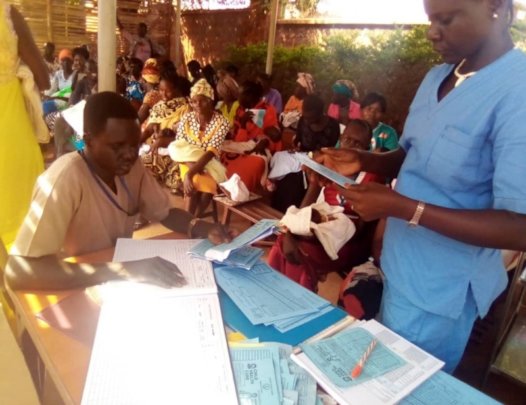 Her Name is "Victory" 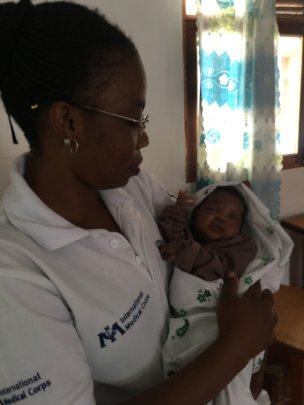 With 3,348 confirmed and suspected cases of Ebola and 2,210 deaths as of December 16, 2019, the Ebola outbreak in the DRC continues unabated.

In September 2019, International Medical Corps admitted a 17-year-old pregnant woman from Biakato to its Ebola Treatment Center in Mangina. The woman was vomiting and had abdominal pains, headache, fatigue, cough and vertigo. Later that day, the woman tested positive for the Ebola virus. She passed away a few days later.

But from her death came new life. On September 29 and at an estimated 34 weeks’ gestation, a girl was born via emergency C-section at a nearby facility as her mother was dying, weighing only 4.4 pounds. The little girl required intensive care and continuous treatment for the first 24 hours of her life.

Everyone at the Ebola Treatment Center waited to see if she would survive these critical moments and wondered whether she would have Ebola. The Ebola virus has long been known to be passed through bodily fluids for long after a patient has recovered, but more research is needed to know the probability of passing the infection from a mother to her newborn child.

Happily, the little girl made it through the first few days without advanced breathing assistance and was soon declared “Ebola-free” by the team of International Medical Corps’ doctors. Fitting the challenging circumstances of her birth, the little girl was named Victorine — meaning “Victory” in English.

Victorine was discharged from intensive care at the nearby facility, and was placed in the Mangina Ebola Treatment Center's nursery to be monitored over the next month. The nursery at the Ebola Treatment Center provides a child-friendly space for the children of people diagnosed with Ebola, with an isolated section for children who have the disease themselves. The intent of the nursery is to mitigate the long-term psychological impact of the disease while providing appropriate developmental and play activities.

Victorine is currently thriving and will remain in the care of the Congolese nuns who help run the nursery until she is strong enough to return to her family.

International Medical Corps sincerely thanks all of you in the GlobalGiving community for your continued support of our efforts to also be victorious over the Ebola virus. 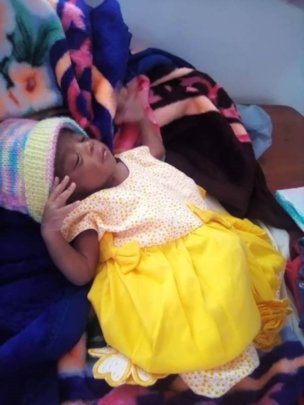 Victorine, born on September 29, 2019.
‹ 1 2 3 4 5 6 7 8 9 ... 130 ›
WARNING: Javascript is currently disabled or is not available in your browser. GlobalGiving makes extensive use of Javascript and will not function properly with Javascript disabled. Please enable Javascript and refresh this page.