In September 2018, Hurricane Maria left a trail of devastation across Puerto Rico, resulting in a loss of lives, limited access to water and electricity, and damage to houses and infrastructure.

Throughout our programming and response efforts, we noticed that Puerto Ricans were experiencing mental health challenges in addition to loss of homes, possessions and livelihoods. The signs included, but were not limited to feelings of loss, fear, grief, hopelessness, isolation, anger, distress, nervousness, and uncertainty, especially in areas with fewer resources.

International Medical Corps undertook an assessment to document these mental health challenges and make evidence-based recommendations for programming. Documenting why we do what we do along with lessons learned during an intervention is a critical component of our learning and our success. Our new knowledge makes it possible for us to make valuable contributions to the collective knowledge base of the humanitarian community.

We found that the population’s mental health was affected by unmet basic needs, poor access to medical services and a lack of safe places to live, among other socioeconomic issues. The findings and recommendations from our assessment have led to us taking a community-based approach in planning. Our staff facilitate awareness sessions to improve coping skills in a crisis and when experiencing strong emotions, support suicide prevention, and make referrals to higher levels of care as needed.

In addition to broadcasting radio shows, as described in our last update, International Medical Corps’ staff has distributed flow charts of the health centers and hospitals with mental health services and counseling hospitals to providers, to strengthen the referral network. We have also facilitated training on an approach known as psychological first aid for 136 community leaders, school teachers and community health workers in Puerto Rico, which teaches both professionals and non-professionals how to provide compassionate emotional and practical support to people under stress.

Despite this work, more is needed, to:

International Medical Corps thanks the GlobalGiving community for its generous support of our mental health programming in Puerto Rico. 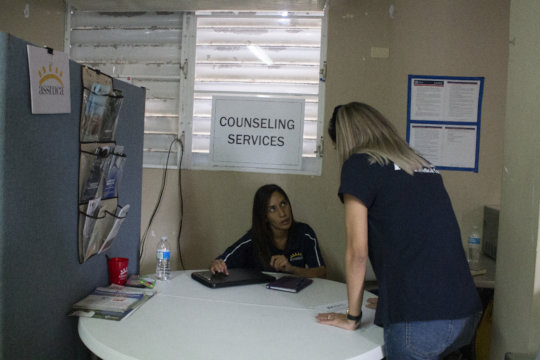 Our team preparing for awareness sessions. 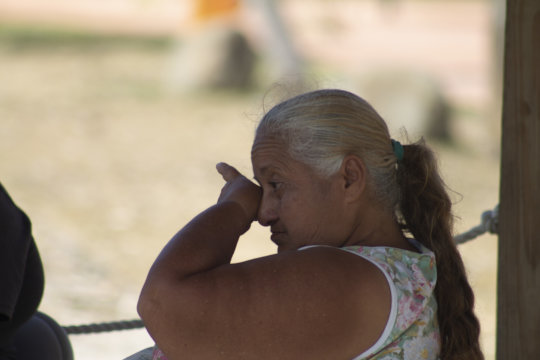 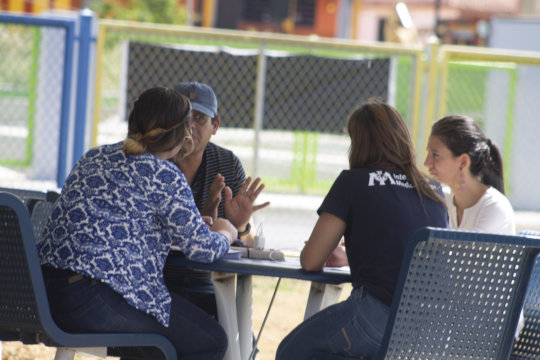 The International Fight Against the Ebola Virus

Right next door to South Sudan, the second largest Ebola Outbreak in the Democratic Republic of the Congo (DRC) made world news over the past summer with the World Health Organization’s declaration of a “Public Health Emergency of International Concern” in response to the recent transmission across country lines into Uganda — meaning that the current Ebola crisis now constitutes an international public health risk and requires a coordinated, broad-based global response.

As part of internationally coordinated efforts, International Medical Corps trains healthcare workers on Ebola preparedness using a curriculum developed in coordination with the World Health Organization in both the DRC and South Sudan, and in Burundi with the Centers for Disease Control. Fears based on rumors and inaccurate information can prevent health workers from being able to deliver vaccinations and identify possible new cases of infection.

Since 1976, the DRC has experienced ten Ebola outbreaks with the number of cases ranging from only one, to the current outbreak, which has recorded a total of 3,264 cases and 2,181 associated deaths as of October 28, 2019. In the DRC, our lifesaving work includes critical services ranging from screening, training and treatment, to contact tracing and community engagement led by local healthcare workers. Trained volunteer community health workers are particularly instrumental in fighting misinformation and rumors that impede efforts to prevent the spread of Ebola.

In South Sudan, International Medical Corps is supporting the Ministry of Health as it prepares for a potential Ebola outbreak. Seven midwifery and nursing students, along with their eight tutors from Kajo Keji Health Sciences Institute (KKHSI), Juba College of Nursing and Midwifery (JCONAM) and Wau Health Sciences Institute (WHSI) joined the fight against transmission and misinformation by participating in our Ebola Preparedness training in July 2019. During this training they learned the case definition of the disease and approaches to Ebola case management and proper infection prevention and control, and practiced donning and doffing personal protective equipment.

Following the training, the tutors promoted awareness of the Ebola virus during their classes. In fact, two of the eight tutors went even further and attended the Ebola Preparedness Training of the Trainers course to teach others; these tutors are therefore not only equipped to host workshops for their students at JCONAM and KKHSI, but they are now also certified to host similar trainings with healthcare workers in South Sudan, should it ever be needed.

International Medical Corps’ students and tutors can continue to be a part of the internationally coordinated effort to fight against the Ebola Virus with the generous support of the GlobalGiving community and other donors.

Follow the link for more information about International Medical Corps’ work with Ebola in the DRC: https://www.globalgiving.org/projects/emergency-response-to-ebola-in-the-democratic-repu/ 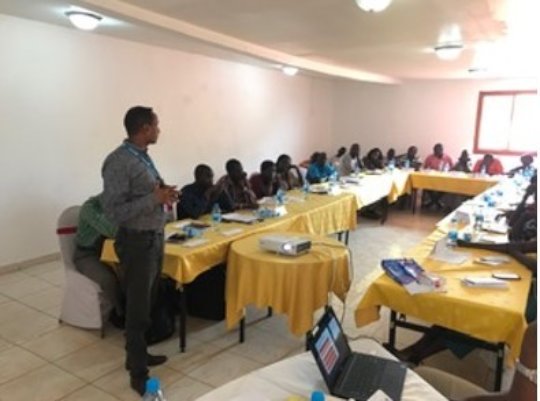 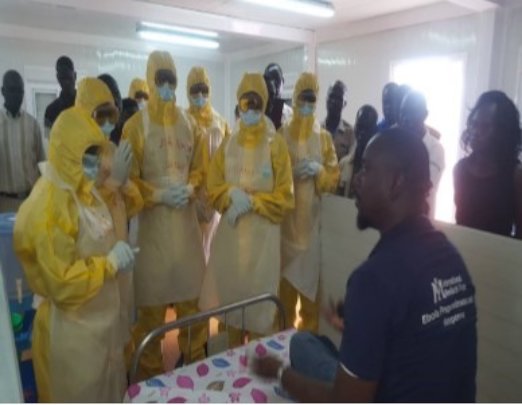 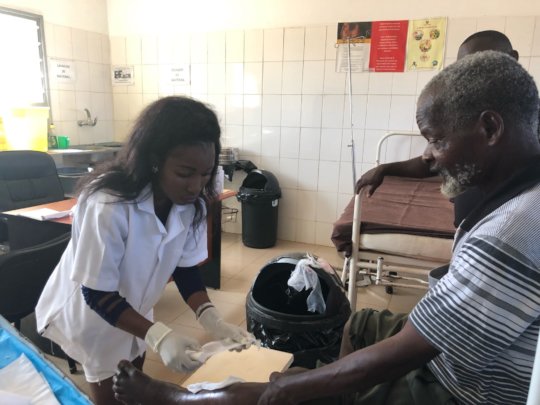 As International Medical Corps’ emergency response to the Cyclone Idai has come to a close, this will be the final report. Thanks to the support of the GlobalGiving community and other generous donors, our team has supported access to safe water, sanitation and hygiene; healthcare; and mental health and psychosocial support for approximately 122,300 men, women and children in Sofala Province.

To continue supporting International Medical Corps and our GlobalGiving projects, please visit our “Emergency Response to Hurricane Dorian.” Hurricane Dorian stalled over the Bahamas as a Category 5 storm, packing sustained winds of 185 mph and gusts of 220 mph and causing widespread devastation and loss of life. More than 1,000 people are still missing and at least 53 people have been killed. In response, International Medical Corps’ teams are addressing the Government of the Bahamas’ priorities in the areas of health, water, sanitation and hygiene, and mental health.

The Tree of Life

On March 14 and 15, Tropical Cyclone Idai, with maximum sustained winds of 130 mph, made landfall near Beira City, Sofala Province, in central Mozambique. The devastating storm left approximately 1.85 million people in need of assistance. Cyclone Idai wiped out roads, bridges and other critical infrastructure in its path, while high winds damaged or destroyed countless homes and buildings — including health centers and hospitals. Moreover, the heavy rains and flooding that continued even after Cyclone Idai made landfall increased the risk of water-borne and vector-borne diseases, including cholera. By May 5, the Government of Mozambique had confirmed 6,739 cases of cholera in Sofala Province.

International Medical Corps worked with our local partner, Esmabama, to reach approximately 80 communities whose access to medical care and support was cut-off due to the damage from Cyclone Idai. During our outreach to one of the communities close to Estaquinha, located in the Buzi district of central Mozambique, we met a woman named Ines. Ines told our teams that she does not know her exact age.

When the flooding came as a result of Cyclone Idai, she grabbed her five grandchildren and ran to reach a safe place with higher ground. The flooding kept coming, so they eventually climbed a mango tree and stayed there for five days. To stay in the tree, Ines removed most of her clothing and tied her grandchildren to the branches of the mango tree because she knew they could not stay awake.

When food floated past in the flood water, Ines and others climbed down and hung themselves from the branches to reach for it. Some people fell into the water and were swept away. She would later look for the bodies of those people.

When Ines and the children finally came down from the tree, once the flood waters receded, she knew the only resource she could hope for was the Estaquinha Health Center. After making their way to the health center, their skin infections, diarrhea and injuries from being among the branches and exposed to the flood water were all treated. Ines is extremely grateful for the care that she and her family received, especially because the area is so remote.

We thank the GlobalGiving community and other donors for supporting our work providing care wherever, and whenever, it is needed after disasters and during emergencies. 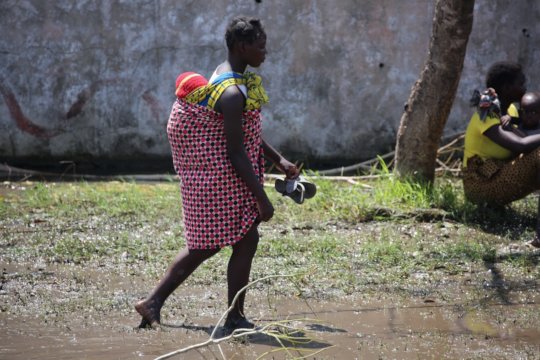 Carrying a child across the flooded areas. 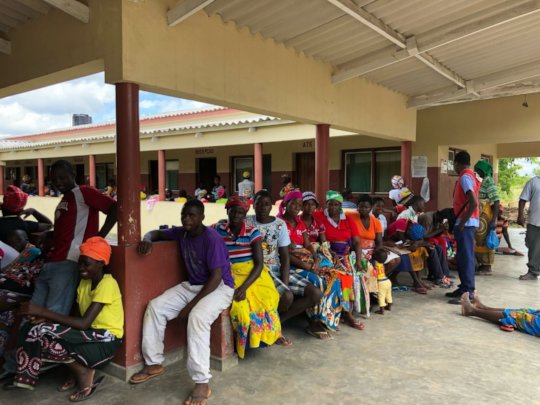 Providing relief after Cyclone Idai in Buzi.
‹ 1 ... 9 10 11 12 13 14 15 16 ... 137 ›
WARNING: Javascript is currently disabled or is not available in your browser. GlobalGiving makes extensive use of Javascript and will not function properly with Javascript disabled. Please enable Javascript and refresh this page.