PHASE has been rebuilding health posts and school buildings in the 2015 earthquake affected areas. Here is the short summary of the finished and ongoing project in the year 2017/18.

Single floor, four class room reinforced concrete frame structure building completed in Ghurdanda, Syangja district and handed over to the school management committee. With this construction, 60 students and 8 teachers have safe learning environment. The school still needs at least two more rooms, one for classroom and other for office for which, funding has not been assured yet.

Three class room earthquake resilient building with WASH facilities has been completed and is in use now. The 2015 earthquake destroyed the school building and teaching/learning was continued in a temporary arrangement. The SMC and the local people, parents of the students, were extensively involved relevant to their skill and availability. The completed construction has provided safe space for teaching and learning. Local people feel confidence and have started sending their children to this school thus there is about 100% increase in number of students compared to just before completion.

Two blocks with three classrooms each have been nearly completed for Bankali Secondary School in Sindhupalchok. The classrooms are now in use with temporary partition to make 10 classrooms and office room. About 320 students and 11 staff have better and safer teaching/learning space available in the monsoon. Construction of one administrative block and other facilities are in progress.

Local people are preferred as worker for the construction. This construction has created 2360 workdays for them.

School management committee (SMC) of both the school is involved in procurement decisions. SMCs of both schools have identified most vulnerable people to support construction so that they also get an opportunity to participate in the rebuilding process.

Total construction is expected to complete by 2019.

Health Posts and Out Reach Clinics

Health post buildings in Kashigaun and Keraunja in Gorkha have been handed over with equipment and furniture for proper functioning as a rural birthing center. Both the health posts facilities are in use.

Construction work of four room, single story, reinforced concrete frame structured building for ORC in Yanglakot has been completed.  Painting work is ongoing. Hagam ORC will be handed over to the local government by mid September 2018.

Similarly Dhuskot ORC in Fulpingkot has been completed, door and window fixing, electrical works and painting is ongoing. This building will be completed by October 2018 for handover.

Gender friendly school toilet with running water facility has been constructed in three government schools in Keraunja and Kashigaun, Gorkha.

Along with other infrastructures, irrigation canals in the PHASE project areas were severely affected by the 2015 earthquake. Three of them are under construction, two in Baramchi and one in Hagam in Sindhupalchok. After completion, these canals will provide irrigation water for timely plantation, mainly of rice and wheat to the farmers field.

Resilient Rehabilitation of Trail  (Unnat Goreto project was designed to rehabilitate/construct trail damaged by earthquake of 2015 in four wards (Kashigaun, Kerauja, Mambu and Hulchuk) of two rural municipalities (Arughat & Dharche) in Northern side of Gorkha District. Project was conducted in consortium partner between PIN (People In Need) and SW (Scott Wilson) Nepal funded by DFID.

Project was designed to benefit victims of earthquake directly and indirectly, making ease in transportation and mobility, as trail is only means of transportation; cash for work model was adopted to construct their own path, so that ownership develops for future maintenance.

All together 70.57 km trail was rehabilitated/ constructed. Figure shows about 48 percent rehabilitation was made in Kerauja, about 29 percent in Kaahigaun and about 23 percent in Manbu .

Similarly, 5 truss bridge were constructed in very needy area of Kerauja and Manbu (2 Manbu & 3 Kerauja) and for ease of pedestrian 8 rest areas were built, 3 in Kashigaun and 5 in Kerauja. Numerous unskilled workers were turned to skilled workers due to regular guidance of technical person.

Social discrepancy related to daily wage rate for male and female was break down by project with providing equal wages.

EDUCATION TO 181 OUT-OF-SCHOOL CHILDREN IN HUMLA 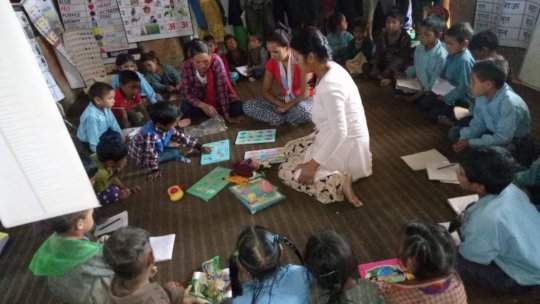 A vibrant and resourceful classroom in Maila

PHASE Nepal has successfully supported 181 out of children in gaining and retaining access to schools in coordination with local schools, district education office and the local government with a series of trainings, social mobilizing and logistic support in Humla. The supported children are the residents of Maila, Melchham and Jair villages of extremely remote and mountaneous district of Humla in Mid Western region of Nepal.

These villages are reachable only on foot by walking at least 3 days from the nearest road access in Bajura District or Mugu District. Humla District itself does not have a road access and the only access to its headquarter Simikot is by mountain flights or at least 5 days of walk from Mugu or Bajura.

When this education project was designed it was estimated that about 120 children would be out of school in PHASE Project villages, Maila, Melchham and Jair. After the actual survey was conducted, 181 dropouts were identified and verified by the local authority revealing a more disadvantageous situation of children in the region.

A summary of project activities adapted to bring these children back to school is presented below.

Logistics Support to the children

Throughout the project period, the children were provided with essential logistic materials such as exercise books, school bags, pencils, pens, erasers and mathematics instrument box in the installment of 6 months. The parents were also communicated accordingly. PHASE Local mobilisers and EDF Anita Acharya monitored the attendance of the children in co-operation with the School Principals.

This proved to be a very effective strategy and all the children to came to school regularly. After getting all the necessary school supplies for their children, the parents felt less burdened and the children felt motivated.

In Humla where everything has to be carried by either mules or porters, everything is of high value. The provide materials were found to be used with good care.

PHASE EDF and Local mobilizers regularly followed up with the parents and students at homes and with students and teachers at schools to ensure regular attendance, to motivate children and to motivate parents. Parents were regularly oriented about the importance of education and how useful it is, for the future of their children. These efforts eventually started garnering increased awareness level and commitment from Parents to send children to schools.

To support this back to school children with better school environment, PHASE provided training and basic material support to the teachers and schools of the project to upgrade elementary classrooms.

114 teachers of the project villages teachers took part in different sessions of child friendly education training. In these training the teachers learned about the following skills :

This fiscal year 2017/18 PHASE was successful in supporting 43 different mountainous schools with training, classroom upgrading and supporting school retention with the support from several international partners and individual donors. 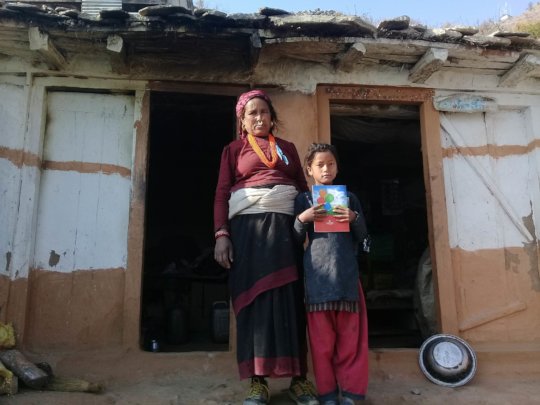 A back to school girl during a home visit 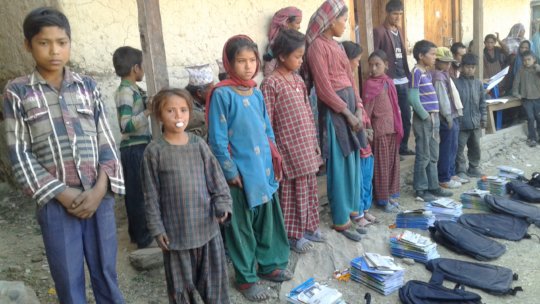 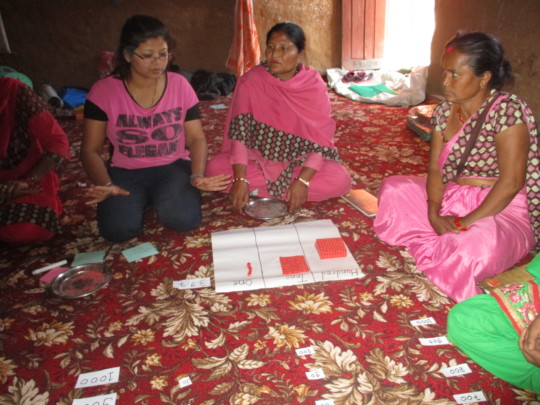 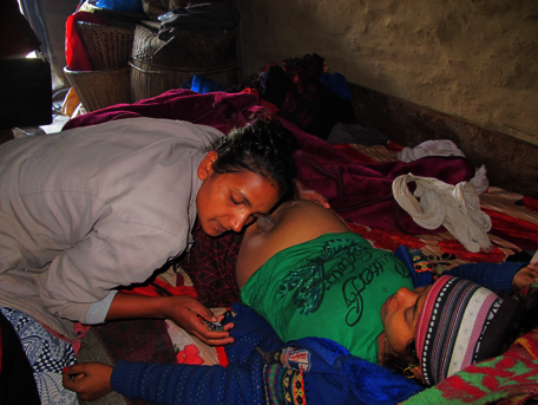 PHASE Nepal with its Community Health Programme, successfully provided maternity services to more than 1900 women in this fiscal year (July 2017- July 2018) in the 26 supported remote health posts in hard to reach mountaneous locations.During the year, a total of 1923 pregnant women were assessed for the 1st ANC (Antenatal Care) services in the PHASE supported health facilities. Among them, about 27%  also completed their in 4th ANC checks. Similarly, a total 913 deliveries were conducted in the project areas. Of them 563 were conducted by PHASE staff and 95 were conducted by other health personal in health institution . 255 women gave birth in their home without any assistance. Within PNC (Post Natal Care) services 829 newborn examinations has been accomplished.With increased services and improved awareness level in the community members, the level of maternity health has improved 26 mountainous villages of 5 districts-Humla, Mugu, Bajura, Sindhupalchok and Gorkha of Nepal. PHASE has been running 24 emergency services in these isolated villages working closely with Nepal government to improve the health facilities in this locality.