Just a few of the people that Sambhali have advised and counselled in the last 3 months.

N. lives in Jaipur and is upset about her husband’s behaviour. He lives in UP. N has filed a case of dowry against her husband in court. Her husband’s friend has been calling repeatedly and asking her to withdraw the case and threatening to kill her. Sambhali advised her to go to her nearest women’s police station in Jaipur, give them this person’s phone number and tell them she is in danger of her life.

M called to say that his sister who lives in Ajmer, is suffering from domestic abuse. His sister’s husband drinks a lot of alcohol, beats her and threatens that she will be killed. Sambhali gave M the number of the Police HelpLine in Jaipur as it is close to Ajmer.

P came to the Sambhali office with her sister-in-law. P is very upset about her married life. She had a love marriage 12 years ago with a man who was the son of her father’s friend. She lives with her husband and mother-in-law in Jaipur for 8 years. Her husband is a car taxi driver. After 8 years of marriage, he started drinking alcohol and started beating her. One day he told her that he had married another woman in Pushkar. P was devastated. When she asked him for more information he beat her and drove her out of the house, so she came to live with her father in Jodhpur with her 2 children. She started working in a factory but after 3 years she suffered badly with asthma and now cannot work. She had no communication with her husband in the last 3 years, but now she wanted someone to pressurise her husband in helping her financially. Sambhali suggested that as her husband lives and works in Jaipur , that she get in touch with the HelpLine in Jaipur. Sambhali spoke to the Garima HelpLine in Jaipur  and related P’s story. They said that P should go to Jaipur to discuss it with them so they can try and help access the husband to provide financial assistance.

S came to Sambhali with her sister-in-law. She lives in Jodhpur with her mother-in-law, husband and 2 children. Her husband doesn’t work and drinks alcohol and beats her. Her husband also disallows S from working which makes it very difficult to look after the children. S arrived at Sambhali very upset and didn’t know what to do. Sambhali asked her for her husband’s phone number and rang her husband to explain that he cannot place this level of restriction on S, otherwise Sambhali will file a complaint against him at the Police station. Since then his behaviour has changed and S is able to go and do some work to earn an income to support her children.

P came to the office with her father and grandmother. She said she was not happy with her married life. She had been married for 8 months, but her husband drank too much alcohol and beat her. He also has forced her to leave her studies. P repeatedly called her husband and her in-laws who told her if she returns to live with them, she will have to stop studying. P. asked for advice to continue her studies and be free of her husband’s threats. Sambhali advised P to continue her studies by becoming a strong woman and if her husband harasses her then she should make a complaint against him to the the Women’s Police station by referring to Sambhali.

A called about his friend S. She had been upset for 2-3 days and had suicidal thoughts. She did not want to share the cause of her problems with anyone. A was afraid of what she might do but explained to Sambhali that S loved a boy who betrayed her and married another girl. If her parents found out that she had had a relationship with this boy they would be very angry and she would be ostracised in society. Sambhali asked for S.’s number but A refused to give it. So Sambhali advised A to have courage and go to S.’s mother and convince her that she should sympathise with S, so that S can rid herself of her mental stress.

K called from Jaipur and said that her family wants her to have an arranged marriage. K loves another boy and wants to marry him. Some time ago her parents agreed to this marriage but when both of the boy’s uncles came to know that K was marrying inter-caste, they threatened her father. K’s father became scared and wanted K to get married in her own caste. K was not happy. Sambhali advised K to counsel with her parents and give the HelpLine number of Jaipur. 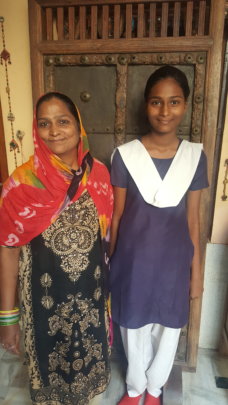 Many thanks to all who have given donations to provide scholarships for children in Jodhpur to go to school. We have been able to fund 5 students through GlobalGiving donations to go to school for a year, thanks to your help. The last student whom we have funded is a girl called Khusboo. Khusboo had been going to school previously but we have needed to find new sponsors this year.

Khusboo is 14 years old and lives in Khetanadi, a district of Jodhpur. Her father is a tie-dyer of fabric and her mother is at home looking after the children as Khusboo has 5 siblings (2 brothers and 3 sisters) of which only Khusboo and 2 other siblings actually go to school.  Her father suffers from heart problems and so they have regular expenditure on medication. Khusboo is in 10th class and she should have 3 more years at school. It is Khusboo’s dream to be a doctor and her favourite subject is science which she really enjoys. We do wish Khusboo well in her efforts to do well at school and to go on to Higher Education.

In May 2017 we held our annual ceremony to grant Scholarships to over 220 children who are receiving education this year through generous individual donations worldwide. We were fortunate to be able to have as our guest, Mrs Sukanya Bharatram, who is the great granddaughter of Mahatma Gandhi. The Scholarship Programme will continue every year to support these children to provide them all with a good education and the opportunity of a better life. 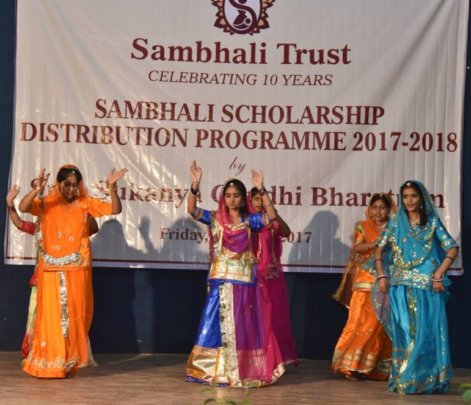 Dancing at the presentation of the scholarships 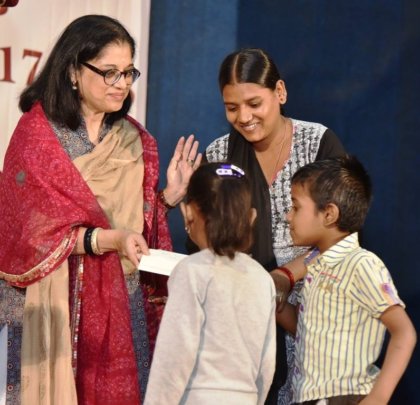 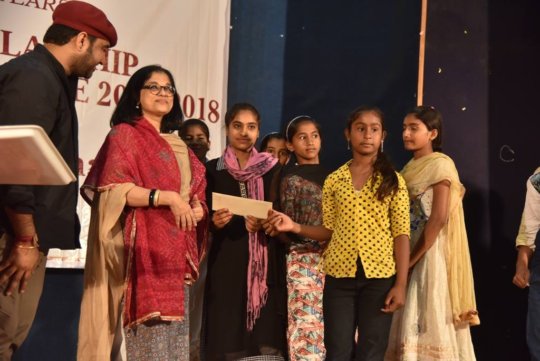 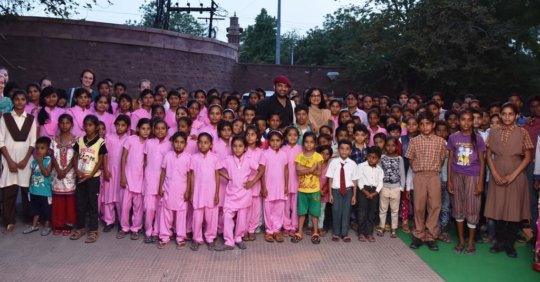 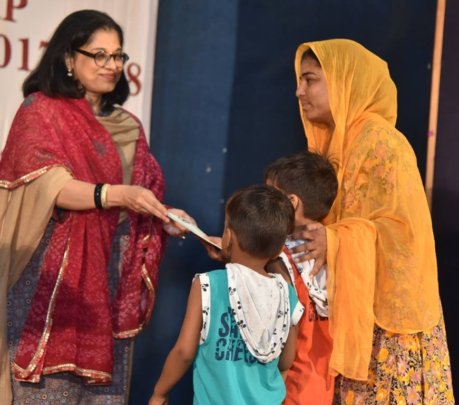 N married in 2006 when she was 10 years old and now wants a divorce. Her in-laws are living in the village and do farmwork. Her husband’s education was up to 12th class and has no job. N. is studying for a BA in English and is keen to study but her in-laws don’t want her to.  N. wants to make this child marriage void and is asking for legal assistance, so Sambhali assisted her to speak to the secretary of the legal aid authority who suggested she file a case. A lawyer was provided free of charge which is the rule in these cases where women seek to abolish their arranged child marriage.

R. male – Justice for his niece

On 5 June 2017, R’s niece K, and her daughter were killed in their village. K’s in-laws said it was suicide, but on 7/6/17 K’s father filed a case against K’s in-laws at the local police station. After this the police started the investigation, but now are not taking further action. K’s uncle travelled to Jodhpur to meet with the counsellor at Sambhali Trust with a file of the case. The counsellor took the number of the police who was investigating the case and spoke to him. He said that the man man accused of this murder had been arrested. The police promised that they would give full support to K’s father in this case.

M phoned Sambhali because her parents want her to marry a disabled man. They are against her studying, don’t let her work and torture her in many ways. She wants to marry someone her own age and whom she can understand. She said that someone wants to marry her; he is a teacher in a school. But due to his different caste, M’s parents won’t accept him and threaten to kill him. M also has a BEducation and wants to carry on with her career. She wanted advice as to what to do. Sambhali called her male friend and said that they are both adults and could get married in court/registry office if they wanted to. She suggested to consult with a lawyer to give them advice.

S came into the Sambhali office with her relative. S told the counsellor that she lives in a village near Jodhpur and that she had been married for 6 years. She told that her husband drank too much alcohol and beat her. As long as she was with her husband she continued to suspect his character and he continued to abuse her. After having a son, when he was 1 year old, she went to live at her father’s house because she did not want her son to be influenced by her husband’s bad habits. Even then her husband followed her and abused her and continued to be abusive on the phone and also threatened to kill her. She said she had studied up to 12th Class and wanted to work being a teacher in a school. She said she wanted to stand on her own two feet and legally divorce her husband. That is why she came to the Sambhali office to ask for Legal Aid. Sambhali’s counsellor gave her general legal advice and spoke to a local lawyer whom then asked to see S. to provide her with legal assistance, so that she could understand the divorce process.

D called up to say that his sister, S’s, husband drinks alcohol and beats her and degrades her sister’s character too. His sister is very upset. He believes his sister’s husband is having an affair with another woman. He is very worried about his sister but not want it to become a police case. Instead he wants his brother-in-law to have counselling. D asked for the HelpLine number and our counsellor gave him their local one in Jaipur.

Attachments:
‹ 1 2 3 4 5 6 7 8 9 ... 17 ›
WARNING: Javascript is currently disabled or is not available in your browser. GlobalGiving makes extensive use of Javascript and will not function properly with Javascript disabled. Please enable Javascript and refresh this page.