Washington, D.C.  (July, 2020) – Washington Area Women’s Foundation, the only donor-supported, public foundation dedicated to building economic security for women and girls in the Washington region, announces its second round of grants from the Stand Together Fund. The new docket, with investments totaling $136,750 will directly fund 336 women care workers – inclusive of family child care providers, early childhood educators, in-home health aides, and medical aides – throughout the region.

“The care workforce has been forced to make impossible choices for the past four months. They have either continued to work to ensure those they care for are safe and healthy while risking their own health, or stopped working and lost their income to protect their own health or care for their own children,” says Jennifer Lockwood-Shabat, President and CEO of Washington Area Women’s Foundation. “Given the direct and disproportionate impact COVID-19 was having on the care workforce, direct cash assistance to care workers quickly rose to the top of our priority list.”

“It’s important to note that the care workforce in the Washington region is largely women of color,” says Martine Sadarangani Gordon, Vice President of Programs, Washington Area Women’s Foundation. “Using trust-based philanthropy, we are thrilled to award grants to six partners who will distribute cash gifts right in the hands of the care workers who need it the most.”

Launched in April, the Stand Together Fund helps support women and girls of color in the region who are disproportionately impacted by COVID-19. The Women’s Foundation identified the safety of women experiencing violence, and the stability of frontline care workers as two issue areas where there are critical gaps in funding.

This is the second round of grants to be disseminated from The Women’s Foundation Stand Together Fund. Four of the six organizations are first-time grant recipients from The Women’s Foundation. The first round of grants, totaling $100,000, were given to organizations that provide culturally specific support to survivors of sexual assault and domestic violence.

Additional grants will be disseminated from the Stand Together Fund to benefit more organizations supporting the safety of women and girls and the care workforce in the region.

The COVID-19 Crisis is a Racial Justice Issue & our Response must Prioritize the Power of Black, Indigenous, Latinx & Other People of Color

The COVID-19 virus does not discriminate — it can infect anyone. However, when an indiscriminate virus is unleashed in a country where racially unjust systems have long decided who lives, who dies, who thrives and who just gets by, the impact is anything but equal. As data disaggregated by race trickles out from state and local health agencies, it has confirmed what many of us not only feared but also anticipated: Black, Latinx and other people of color, who are the people of the global majority, are disproportionately dying from COVID-19.

A racially disparate impact necessitates a racially equitable response — one that prioritizes the leadership of Indigenous, Black, Latinx, and other people of color to respond to the immediate needs in their own communities, bolsters resilience in the face of this crisis, and builds power to push for long-lasting systemic change. With this in mind, we, the undersigned funders who believe in reimagining philanthropy as a just, racially equitable transition of power and resources, have coordinated approximately $2 million in sustained funding and $500,000 in rapid response funding to date to organizations led by people of color in the Washington, DC region based on the following commitments:

1. Supporting underfunded organizations led by people of color
Organizations led by people of color are traditionally underfunded; therefore, they are less likely to have reserves and are more likely to be unsustainable after an economic crisis. We challenge the notion that the nonprofits that can weather an economic downturn are the “best.” Rather, they have not suffered from decades of systemic underinvestment from local and national funders. We commit to designating funds to organizations, projects, groups and collaboratives that are led by Black, Indigenous, Latinx, and other people of color, who are using an intersectional lens, and have operating budgets of under $1,000,000.

2. Solidarity with organizers, base builders and advocates
The philanthropic sector and the individual donors who support nonprofits are less likely to support the work of community organizing, base and power building and advocacy. We believe that more investment in organizations and groups that do this important work is imperative to address the issues that precipitated this crisis and the fallout to come. We commit to supporting those who have been organizing, advocating, and building power with communities of color before, during and in the wake of this moment.

3. Focusing hyperlocally
In times of crisis, your neighbors — those living and working in proximity to you — are often your first responders. We believe community care and mutual aid are vital responses in this moment and their structures will have lasting benefit beyond this crisis. We commit to focusing this support toward groups working in hyperlocal ways, for example, the neighborhood, block or building level.

4. Prioritizing disproportionately impacted industries and workers
Prior to the COVID-19 crisis, the District of Columbia already reported the highest Black unemployment rate in the country, and Virginia had a wider gap between Latinx/Hispanic and white unemployment than any other state. In the month of March, unemployment in the Greater Washington region, like the rest of the country, skyrocketed. Restaurant workers, domestic/care workers, hospitality workers, sex workers, day laborers, and those dependent on the formal and informal gig economy lost their livelihoods in the wake of COVID-19 — sectors where people of color make up the majority of workers and frequently have few worker protections. We commit to supporting organizations and groups with sector-specific priorities to increase the resiliency of our region’s disproportionately impacted industries, many of whom employ large numbers of people of color.

5. Taking a multi-pronged approach
Philanthropic institutions’ support must be as nimble and diverse as the evolving challenges our partners and their constituents face. Organizations are in the midst of shifting strategies and they are experimenting with digital organizing, conceiving of new fundraising plans and devising new engagement methods in a year with big priorities, including civic engagement and the Census. Our support is crucial. At the same time, we ask funders of social service and large-scale advocacy organizations to realign their resources in support of grassroots groups. We commit to a multi-pronged, innovative approach to address the needs of organizations led by people of color to develop new capacities and shift their strategies.

6. Operating with trust
Philanthropy is a sector created and maintained by inequity and an imbalance of power, and we recognize our role in maintaining inherited practices that hinder our ability to be at the forefront in achieving racial justice. We commit to reimagining the relationship between funder and grantee partner, operating through a trust-based approach that is transparent, streamlined, flexible and removes unnecessary barriers that disproportionately impact grassroots groups and organizations led by people of color.

As funders coordinating this effort, we pledge to act as advocates for these groups and invite our philanthropic peers, both locally and nationally, to part ways with business-as-usual philanthropy to meet this moment, which is anything but usual. Here are steps you can take right now:

1. Get the support you need from funding peers with experience in racial justice grantmaking. Organizations like Neighborhood Funders Group and Association for Black Foundation Executives can help. For local support, reach out to any of the signatories on this letter for opportunities to plug in.

2. If you do not have the relationships or capacity to deploy funding quickly to grassroots groups, rely on trusted intermediaries such as Diverse City Fund and Emergent Fund, who have a history of funding systems-change work driven by people of color-led grassroots organizations.

3. Extend your influence beyond grantmaking by contributing your time, expertise, and voice. We have formed sub-committees focused on civic engagement, healing justice and capacity building. We are especially inviting national foundations with regional offices in the Washington, DC region to join us.

4. Finally, attend the trust-based philanthropy webinar hosted by the Washington Regional Association of Grantmakers on Monday, April 20th at 11 a.m. to learn how to reimagine your philanthropy. Information can be found here: trust-based-philanthropy-during-times-crisis-and-beyond

Board of Instigators
Diverse City Fund 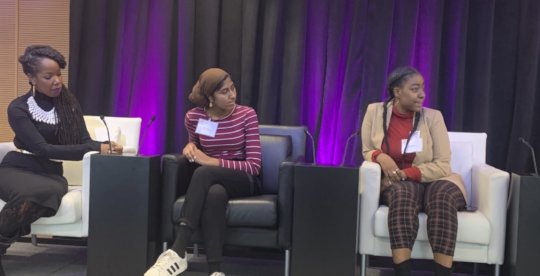 Last month I had the honor of speaking as a panelist at the “Declare Equity for Girls: Power & Policy Luncheon” by Crittenton Services of Greater Washington. As a poet, I am used to speaking on stages, navigating green rooms, and gauging audiences but something about this experience felt different. Not only was there a focus on amplifying the voices of the most marginalized, there was action behind the rhetoric.

From my experiences, the luncheon organizers and participants embodied the change needed. I felt this most clearly in the language used. Far too often, the same spaces focused on empowering youth, end up creating barriers to youth engagement. They hold events during the school day, don’t assist with transportation, and on top of all that, use jargon that most (without the expertise) don’t understand. This isn’t to say that young people aren’t intelligent or that they are incapable of participating in these discussions. On the contrary, youth often have the experience and input that adults need to create sustainable, long-term solutions.

Instead of using academic and industry-specific jargon, effective messages are rooted and phrased in youth’s lived experiences and expertise.

What I commend Crittenton Services for doing so well is mixing the two — bringing in academics, community leaders, and experts who use language you don’t need a PhD to understand. Incorporating slam poetry, an emcee who casually referenced “hot girl summer,” and a panel that ranged in age, I quickly realized that this event was unique. For once, I felt comfortable. I felt like I was in a space made for me, not one in which I was merely a guest. I didn’t feel the need to code-switch or censor myself. I knew I was in a place where I could talk about intersectionality and Muslim Twitter in the same breath; I knew I could be myself and still be heard.

Reflecting on my experience as a panelist with Crittenton Services of Greater Washington and my experiences with numerous other organizations, I am reminded again of the ways we show up in spaces. The ways we show up and the people we bring with us can either continue the status quo or make room for new, innovative, and necessary change.

As we engage with nonprofits, advocacy organizations, and organizers, we need to be mindful of what we are bringing to the table and what doors we are opening for others. Are we advancing ourselves and the communities we purport to serve? I think this is a question every good public servant needs to ask themselves constantly. For myself, I am reminded of the ways I can accidentally play into the “good Muslim” stereotype, furthering myself while simultaneously feeding into problematic vs. bad Muslim discourse. Even though my original intentions could have been innocent, the outcome is less so. To be an ethical changemaker, I must have both: the intention and the self-reflection required to secure the anticipated result.

Moving forward, I encourage all of us to take a critical look at ourselves and the organizations we engage in. It is far too easy to critique other organizations that you forget to take a look in the mirror. In what ways do we perpetuate the same forces, whether it be gate-keeping, white supremacy, or sexism, that we purport to be fighting against? How can we identify these gaps? And most importantly, what solutions can we take to be more equitable, and inclusive, and not just in theory but also in practice.