The Infirmary is Open! 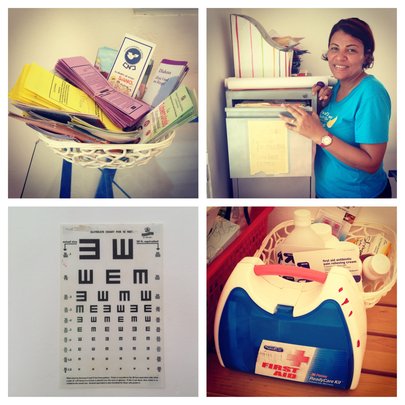 Alexandra in our new infirmary!

Thank you so much for your generous donation to "Health Care for the Mariposas!" We are thrilled to announce that our infirmary is open! We now have our very own space at The Mariposa Center for Girls to provide first aid, hold private counseling sessions, host volunteers for annual well visits, eye exams and dental checkups and more! Our infirmary also serves as a information center where the girls and their families can access basic medical supplies, obtain valuable information and connect with other available resources in our community.

Our new infirmary also serves as a nurses office where girls can go to get immediate basic care. With 100 girls running, swimming, playing sports and being active, we needed a dedicated space to deal with cuts, bruises, scrapes and students that just may be feeling under the weather!

In the past we had no where to store supplies or perform basic first aid and our annual clinics were held in an extremely cramped space and we were not able to accomodate everyone. This year, because of you, we have a beautiful space that will serve more than 100 girls and their families. We can now have onsite regular checkups, preventative care and access to health information and resources help us to ensure that our girls are happy, healthy and able to stay in school.

Alexandra Milian Martinez is a clinical psychologist who oversees all of the health work that we do with girls and their families. Alexandra is a full time staff member who joined us three years ago from CEPROSH, a free HIV/AIDS clinic located in Puerto Plata, where she also runs the children’s program. Alexandra is thrilled to finally have a dedicated work space at The Mariposa Center for Girls. "When you are poor, you don't go to the doctor unless something is very wrong. Having this infirmary at Mariposa means that the girls and their families can come in and ask questions, get information and learn to protect and take care of themselves. It is extremely important in our community where there are not a lot of places to go, especially where they can feel comfortable and it is completely free!", says Alexandra.

On behalf of Alexandra, the girls, and all of the staff and volunteers at The Mariposa DR Foundation, thank you for contributing to this important project and your commitment to keeping our Mariposa girls happy and healthy! 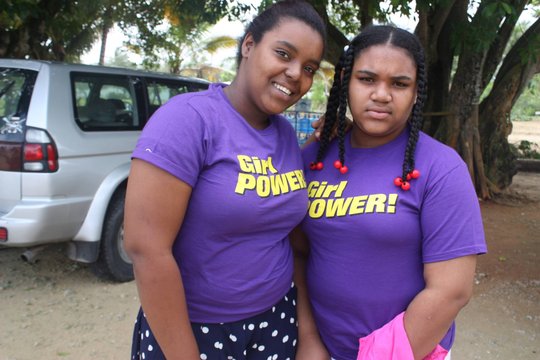 Over the past few months our Mariposa girls have been involved in numerous experiential learning opportunities and job skill training workshops. The 25 oldest Mariposas, ages 14 and up have been participating in intensive job readiness and computer skills workshops.  The goal is to use experiential learning methods to introduce girls to the knowledge, language, and skills they need to enter the job fields available to them and get them excited about finding work.  The program has gotten off to an extremely successful start with more than one-fifth of the girls already steadily employed!

Yanaira is 15 years old, a full-time high school student, and is employed by one of our partner organizations, 3 Mariposas Montessori, a local bi-lingual preschool. "It is my dream to become a teacher and Mariposa is supporting me to achieve it. I love my work and it makes me happy to be able to contribute to my family," says Yanaira.

At The Mariposa Center for Girls we have three high school girls that are employed. Fernanda and Edileisa are developing their administrative skills as office assistants in our main reception area and Ana Iris is learning all about property maintenence and custodial management. Ana Iris who is 17 and lives on her own says "At Mariposa I like that I can stay in school, have the opportunity to learn new things like dance and art, but I also have a job where I can earn the money I need to support myself." Ana Iris is responsible for maintaining cleaning supply inventory at The Mariposa Center for Girls and making purchases for all cleaning supplies and coordinating additional maintenence staff.

This semester we also piloted a waitressing and hospitality course so that some of the girls could begin to explore employment opportunities in the tourism industry. For two months our girls trained as professional waitresses and were able to show off their skills to their guests at The Mariposa Center for Girls Inauguration Gala on February 8th.

Because of your support, our experietial learning and job training programs are enabling the Mariposa girls to explore opportunities that they can get excited about, keeping them motivated to stay in school and empowered to take charge of their futures. As each of our girls learn and grow we will continue to support them on their individual paths to becoming independent women and changing the course for future generations of their families.

Thank you all so much for your continued support and dedication to the girls of the Mariposa DR Foundation.

With love and gratitude, 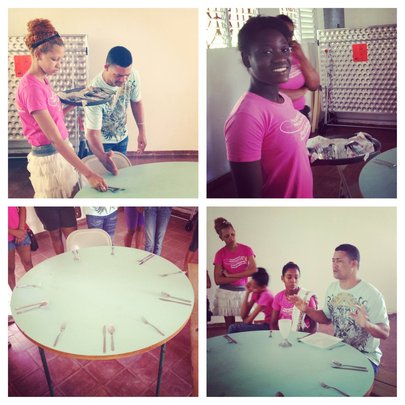 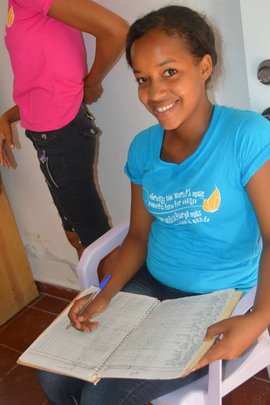 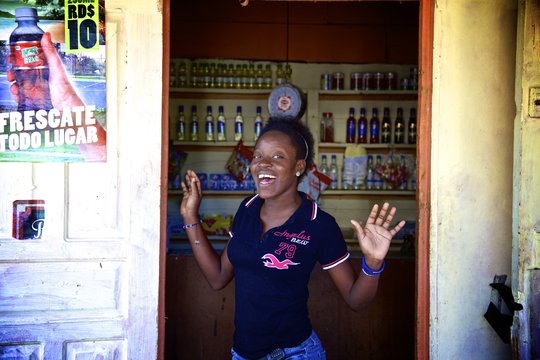 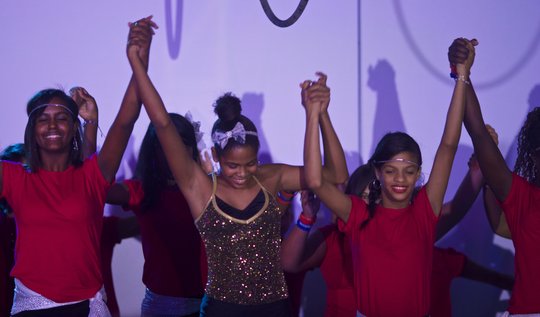 The Inauguration Gala for the Mariposa Center for Girls was a huge success!  Final preparations were completed, performances were learned, and the center was transformed in preparation for this amazing event. All our Mariposa girls, young and old, played a role in this special event. Some put on incredible musical, dance and circus arts performances, others trained as waitresses (which can also help them to find jobs now that the event is over!), and a group of girls our youngest girls practiced their English for the gala so they could say the blessing.

Jose-Luis Lopez, who plays Graffiti Pete from the Tony Award Winning musical In the Heights, worked six days a week for an entire month with a group of Mariposas, teaching them the choreography to perform a selection from the musical during the gala.  We are unbelievably proud to say that all 23 girls who auditioned were able to dance in the performance. Additionally, many these girls were part of our original Mariposa group that was created four years ago!  It was so special to have them take part in the event and show off how far they've come. Fourteen year old Mariposa Girl, Aritza, who has been in our program with her three sisters since the beginning, cried tears of joy and proclaimed that she would remember this special evening for the rest of her life. The best part of the whole evening was hearing the Mariposa girls shriek with excitement as they exited the stage from an amazing performance.

The stars of the evening were undeniably the Mariposas, but we had some incredible guests attend as well.  There were preformances by the Tony Award winning Lin-Manuel Miranda and the sweet music of Ensemble Meme.  Special guests included international bestselling author Julia Alvarez, Girl Rising producer (and our event MC) Holly Gordon, and members of the famed Mirabal family.

With all of these incredible happenings, we wanted to recognize that none of this would have been possible without your support over the past few years. It's hard to believe that less than two years ago, Mariposa programming was taking place in a small apartment. The Mariposa Center for Girls is officially open and we are honored to be serving more than 100 girls and their families. We look forward to keeping you updated on all of the amazing progress we have been able to make at the Center thanks to your generosity.

With love and our deepest gratitude for your continued support, 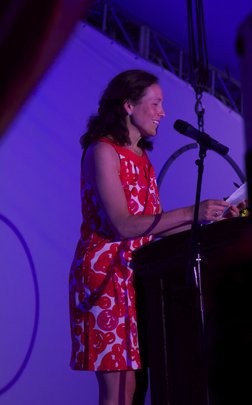 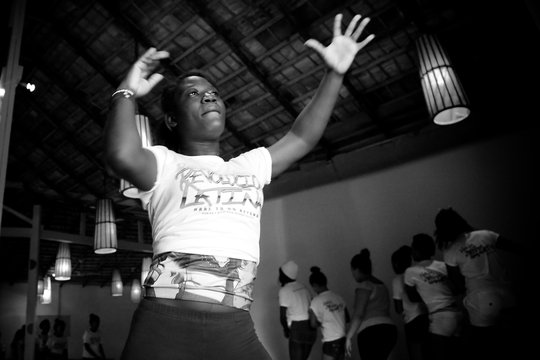 ‹ 1 ... 19 20 21 22 23 24 25 26 ... 31 ›
WARNING: Javascript is currently disabled or is not available in your browser. GlobalGiving makes extensive use of Javascript and will not function properly with Javascript disabled. Please enable Javascript and refresh this page.