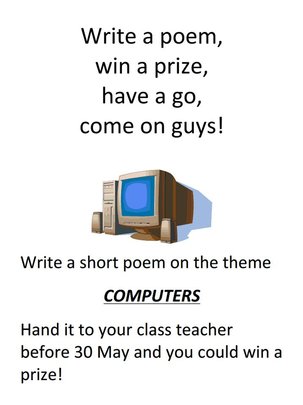 In anticipation of the new computer lab coming at the end of the summer, BeeHive School held a poetry contest.

There were some very good entries, good job to all the students!

Here are the winning poems:

Computers, what wonders of human making computers are
Simplifying peoples’ lives by basically simplifying their work,
Online shopping, online banking and one click onto the internet,
The largest database  on which you can search about anything in this world, all of this in one machine

Computers
Where you have Microsoft Word to write things like a letter,
editing options to make things better,
a place for Mr. Ngwira to form a test,
computers otherwise called a PC, a place to relax and play W.W.E.
computers allow you to make rapid calculations,
a place to keep movies like comedies or animations,
an electronic device both friendly to adults and kids,
where we can check on news feeds,
Ipod, phones, tabs are what people love,
but for me a PC is the best electronic I could have.

Computers are full of games
They all have different names
Computers are fun
There is one where you draw a sun
You can type stories
John typed one about lorries.

On Friday when
the sun will rise
I hope I win a prize
If I win
A fish will clap
with its fin,

Science and Computers at BeeHive School 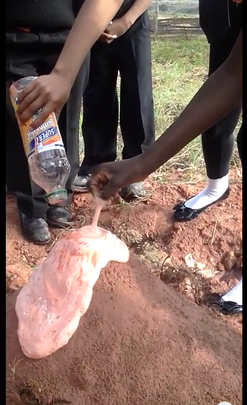 BeeHive School has a strong, balanced curriculum, where social, moral, spiritual, and physical development is fostered, as well as a strong focus on literacy, numeracy and science. Despite the limited resources at the school, the teachers at the school have come up with fun, engaging and educational science experiments, ranging from chemistry to physics to computer science. The teachers' hard work and dedication has paid off, as the students not only love science, but have done very well in science on the standarized exams.

When standard 7 was learning about chemical reactions in the classroom, they got to create their own volcanic eruptions! They learned about chemical reactions in the classroom, then went outside, got into teams and contructed volcanoes out of the dirt. The students carefully measured the exact amounts of baking soda and vinagar they needed, and erupted their volcanoes! The Standard 3 class was able to watch the eruptions, which created a lot of excitement and enthusiasm about science!

When power got installed at the school last year, BeeHive School managed to turn it into a learning opportunity and the students learned about current, power and also about safety!

Once a week, each class gets to go into the library and computer lab. Two thirds of the students go to the library to browse and read books, while the other third gets to use the computers. Although the few computers in the lab are very old, the school is very appreciative of them and takes very good care of everything in their computer lab. The computers are valued by the students and teachers. The children love using them, and for most of them, it's their only opportunity use a computer.

The school is hoping to increase the number and upgrade the computers this summer. This will allow a whole class to use the computer lab at the same time, with everyone having their own computer, and will allow the teacher to teach a lesson on them. Having an up to date computer lab will allow BeeHive's curriculum keep up with the rest of the world.

BeeHive School sees the value in technology, as students need to be exposed to them from a young age in order to contribute to helping solve the world’s toughest challenges. They want to give their students an opportunity to click, play, learn and interact with computers. Whether the students become scientists, social workers, doctors, business leaders, teachers, accountants, non-profit founders, secretaries, entrepreneurs, or the president of Malawi – early access to computers will help them be the best person they can be.

The school has raised quite a bit of money for the lab, and is hoping to reach their goal by the summer.

Wishing all our supporters a lovely day, 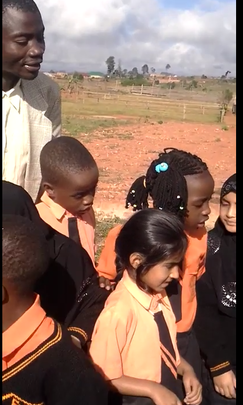 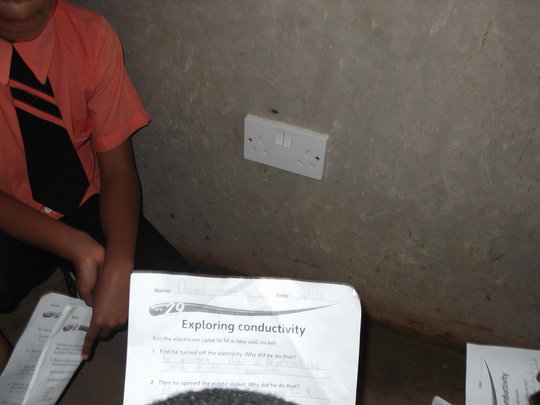 The school year begins in mid-January for all Zimbabweans.  Its mid summer, which means very hot and humid.  The economy in Zimbabwe is not doing well since there is a shortage of hard currency. Shops don’t have as much food and prices have gone up quite a lot. The government actually has plenty of income from the “blood diamond” fields near Mutare but most of it goes into the private coffers of the president and his men.  Yet Zimbabweans still say they have hope of things getting better. We hope so.

We are still waiting for the information from the school on the girls that may be assisted with their school fees. We help as many girls as we can each year, depending on the donations we receive.  This past year has been particularly quiet on the giving front for these girls.  So the number of girls assisted will depend on how much each needs.

Please make a contribution.  You can help one more girl stay in school and have a better future.