By Jen DeMeo - Director of Development

Children’s Aid’s Wagon Road Camp, located in Chappaqua, NY, offers low-income children from New York City and Westchester County an engaging, activity-filled weekday camp experience. We also offer a weekend Respite Camp that incorporates the key elements of camp into a safe, supportive environment for youth with developmental and physical delays. In all aspects of Wagon Road programming, we aim to foster the development of academic and social-emotional skills while enabling youth to explore their interests and gain a deeper appreciation of the natural world.

The benefits of attending summer camp are clear – a longitudinal study conducted by the American Camp Association has been exploring the impact of camp on youth’s preparation for college and careers, with positive results emerging as the study progresses. Preliminary findings have shown that attending camp has a strong impact on long-term personal and professional growth: the main benefits cited by former campers included relationship skills development, appreciation of diversity, emotional regulation, and increased responsibility. Additionally, those surveyed said the main factors that set the camp experience apart as a unique learning environment were opportunities to be present in the moment, learn through firsthand experience, and explore one’s identity. Participants also noted that camp helped to prepare them for educational and career success.[i]

Children’s Aid was pleased to host approximately 400 youth ages 5-13 during the daytime summer camp program at Wagon Road this year. Summer camp occurred from June 27 through August 9, during which youth were shuttled to and from camp each day via buses.

This year, the variety of activities offered at Wagon Road included music, art, drama, mindfulness and yoga, archery, swimming, horseback riding, baseball, cooking, and Gaga, an Israeli dodgeball game that promotes teamwork and hand-eye coordination. Youth were provided a healthful lunch every day to support their development and provide key nutrients. We also offered campers an opportunity during each camp session to spend a night at Wagon Road to help prepare them for future sleepaway camps; these overnight camps included a scavenger hunt, outdoor movie, and other fun activities to help youth become comfortable with being away from home. Approximately 250 youth chose to participate in the overnight sessions this summer.

An exciting new camp component this year was the addition of two “free periods” each day for campers ages 8-13, during which campers could select activities of their choosing, giving them the opportunity to further explore their interests. Campers could elect to double up on some of the regular activities, such as drama, cooking, music, and art, or choose from a list of additional offerings including foosball and ping-pong, team-building games, Double Dutch and other jump roping games, creating balloon animals, and team sports such as volleyball, basketball, soccer, and football. Older youth also had the option of creating video blogs and podcasts through project-based learning—they conducted interviews and developed content using GoPro cameras and recording devices. The “free period” was well received and we plan to make it a permanent camp fixture going forward.

Studies have also shown that social-emotional capabilities have a number of positive impacts on youth, such as an increased ability to manage their emotions, improved academic achievement, and resilience to trauma and other negative life experiences.[ii] As such, social-emotional learning is one of Children’s Aid’s key focus areas, and all aspects of Wagon Road programming are aimed at developing age-appropriate social-emotional skills including leadership, teamwork, relationship-building, and positive decision-making. The team of Wagon Road staff also includes trained social workers who provide conflict resolution support as needed.

One of the main social-emotional components of Wagon Road is our adventure-based set of low and high ropes courses, which incorporate the team-building methodology developed by the nonprofit Project Adventure. This approach encourages youth to step outside their comfort zones and emphasizes values such as self-exploration and discovery. Youth are divided into groups and work together to solve challenges as well as participate in activities that build trust and relationships. We utilize a “challenge by choice” method in which campers decide for themselves whether they want to engage in adventure activities. Wagon Road’s variety of both low and high ropes course activities ensures youth feel comfortable and safe while encouraging them to try new things. After each activity, staff conduct a two-part debrief—one discussion among the group and one among counselors to assess the activity’s observed impact on the group.

Cooking: This summer, a group of campers worked with Wagon Road’s Cooking Specialist to prepare an entire meal from scratch, which most of them had never done before. Campers prepared components of an Italian meal that included eggplant parmesan, focaccia bread, and handmade pasta. The campers enjoyed tasting each item they prepared and learning more about Italian cuisine. This experience exposed the youth to the benefits of fresh and nutritious foods as well as the joy of cooking.

Drama: Our drama program focuses on engaging campers in building their confidence and teamwork abilities, fostering their creative development through performing a short piece on stage for an audience of their peers. This year, the drama program used a musical theater theme, incorporating singing and dancing elements alongside acting. The older campers chose to present a number from the musical “In the Heights,” which takes place in New York City’s Washington Heights neighborhood. For the final performance, campers made their costumes and developed dance choreography, allowing them to showcase their abilities and express themselves creatively.

Malia: Seven-year-old Malia came to camp for the first time this summer and continually expressed her enthusiasm for trying activities she had never done before, such as making s’mores over a fire and spending a night away from home. At the ropes course, she was initially unsure about participating in the Flying Squirrel, where a camper in a harness is lifted up to thirty feet in the air; however, encouragement from the staff and other campers helped her feel brave and convinced her to try it. She ended up loving the Flying Squirrel, dancing in the air and calling herself “the flying princess.” Malia also formed a friendship with an older camper, eleven-year-old Amoya, who took the same bus to camp each day. The girls developed a close bond and Malia looked up to Amoya as a role model with whom she could discuss her emotions and thoughts.

Victoria: Victoria has attended Wagon Road for four years and enjoys spending time with her camp friends each summer. Now thirteen, this summer, Victoria repeatedly acted in a disrespectful manner toward camp staff, a behavioral pattern that is not unusual as returning campers become teenagers and begin to test boundaries. In response, staff created a plan to address her behavior through a firm and honest review of her actions and the resulting consequences. Victoria eventually admitted her behavior had been wrong and worked with staff to develop an apology. When she was ready, Victoria met with the people to whom she had been disrespectful and communicated to each of them a sincere apology. For the remaining weeks of camp, Victoria acted in a more cooperative and respectful manner toward the staff, highlighting the social-emotional impact and lessons that can be learned during a short period.

As an innovative, multi-service agency, Children’s Aid has long believed in, and nurtured, the limitless potential of New York City’s children and youth. Without your generosity, we would not be able to deliver the high-quality Wagon Road programs that serve hundreds of low-income children and youth each year.

By Jen DeMeo - Director of Development 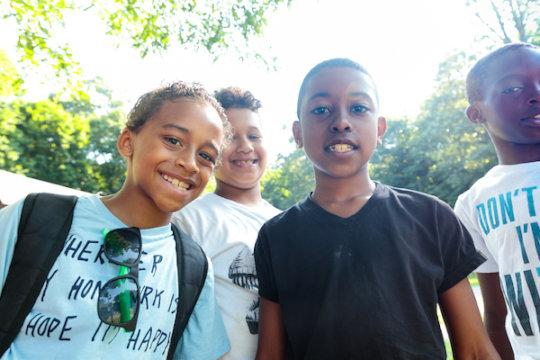 Each day at Wagon Road is new, different, and exciting for kids:

The memories that children gain at Wagon Road last a lifetime. Tania, a 2019 camper, reflects on her summer, "My favorite thing this summer was all the activities you get to participate in. Another thing I love about Wagon Road Camp is the kindness and all of the groups feel like a family, always having each other’s backs.”

Thank you for another amazing summer, filled with self-improvement, learning, and FUN! 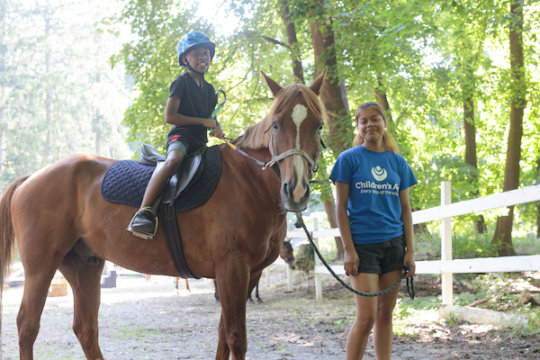 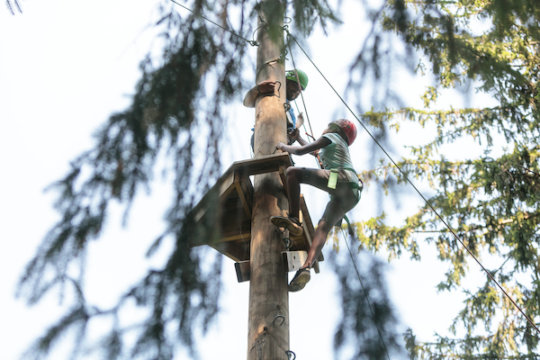 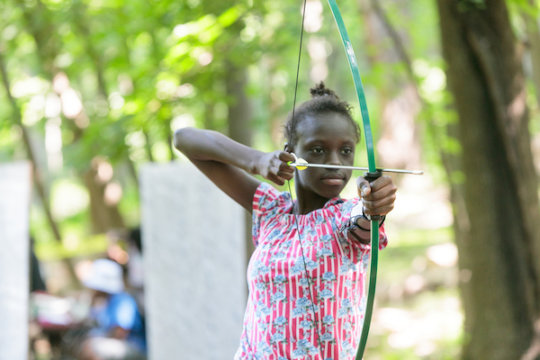 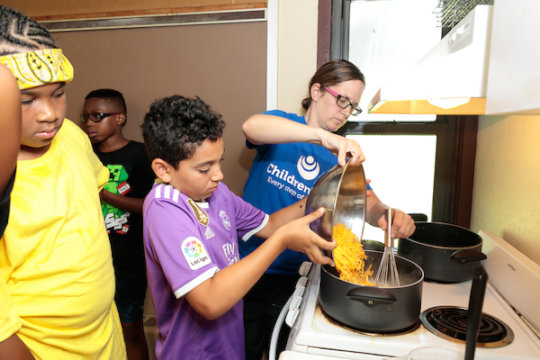 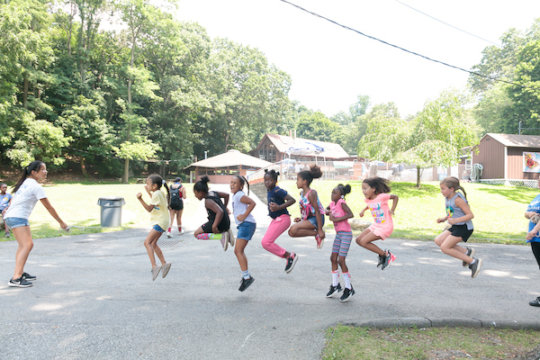 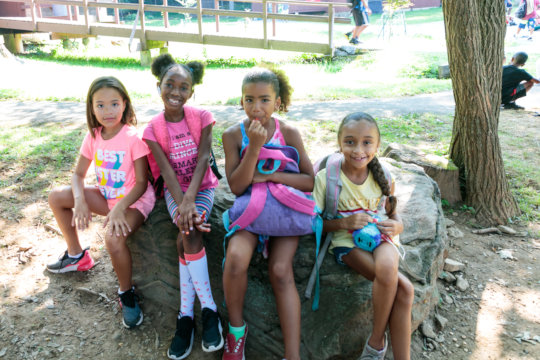 Children’s Aid’s Wagon Road Camp hosted approximately 400 youth ages 5-13 during our 2019 daytime summer camp program. From June 27 to August 9, campers utilized bus transportation to travel to and from our 53-acre camp in Chappaqua, New York. Under the guidance of camp counselors and staff, campers enjoyed a variety of activities including music, art, drama, mindfulness and yoga, archery, swimming, horseback riding, baseball, cooking, and Gaga (an Israeli dodgeball game that promotes teamwork and hand-eye coordination). Campers enjoyed healthy lunches every day and also had the opportunity to spend one night at Wagon Road to simulate the sleepaway camp experience. The overnight session included scavenger hunts, outdoor movies, and other fun activities. Thanks to your contributions, two campers—one from New York City and one from Mount Vernon, New York—received full-tuition scholarships to attend Wagon Road. We hope you enjoy the accounts of their summer camp experiences, which would not be possible without your support.

Malia (7 years old) attended Wagon Road daytime camp for the first time this summer and described her experience as magical. Wagon Road enabled her to try many new activities, including roasting s’mores over a fire and spending a night away from home during the overnight camp. When we asked her to describe one special experience, she detailed the ropes course, and talked at length about one particular component of it—the Flying Squirrel. During this section of the course, campers can fly 30 feet into the air with the aid of a safety harness. While she was initially unsure about participating, encouragement from the staff and other campers helped her feel brave enough to try it. After the first try, she loved it and even called herself “the flying princess” while dancing in the air. Also, Malia mentioned the friendship she formed with Amoya, an 11-year-old camper. After the girls met on the bus to camp, they developed a close bond, and Malia began to look up to Amoya as a role model with whom she could discuss her emotions and thoughts.

Victoria (13 years old) has attended Wagon Road daytime camp for four years. She shared how much she enjoys spending time with her camp friends each year but also shared quite a different experience than Malia. This summer, Victoria repeatedly acted disrespectfully toward camp staff. While this behavior is not unusual for returning campers as they grow into their teenage years, camp staff must confront the issues. When her counselors addressed Victoria’s behavior, she did not immediately admit wrongdoing. After a couple of meetings, she eventually admitted that she did not act appropriately at times. When her counselors suggested they create a plan to work through the challenges, Victoria was very receptive to the idea. When she was ready, Victoria met with each person she had mistreated and made a genuine apology. For the remaining weeks of camp, Victoria acted more cooperatively and respectfully with all staff. Victoria thanked her counselors for helping her and shared that she will utilize the strategies they developed if she finds herself in a similar situation during the school year. This experience also presented a learning opportunity for all camp staff. During a staff meeting, counselors reflected on the social-emotional impact they can have with campers and the positive lessons they can take with them to help navigate difficult situations at home.

Thank you for making summer 2019 such a special one for Malia and Victoria! We know how meaningful their camp experiences were to them and we look forward to sharing more impactful stories with you in the future. While Wagon Road daytime summer camp has concluded, we still have some time before summer is officially over. We hope you have a productive few weeks and enjoy the remaining summer sun. On behalf of Children’s Aid and the children and families we serve, please accept our sincere gratitude for your support. 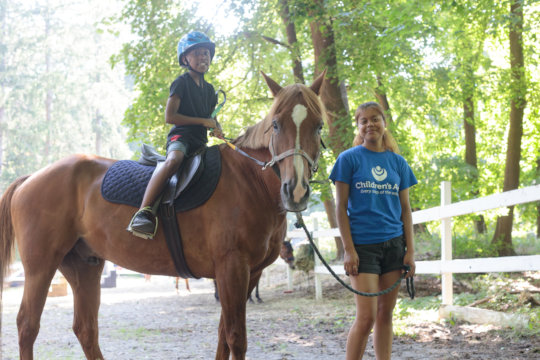 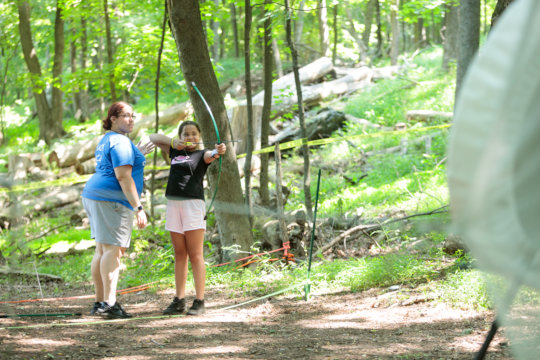 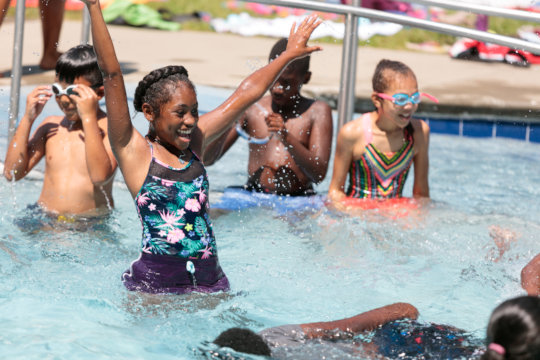 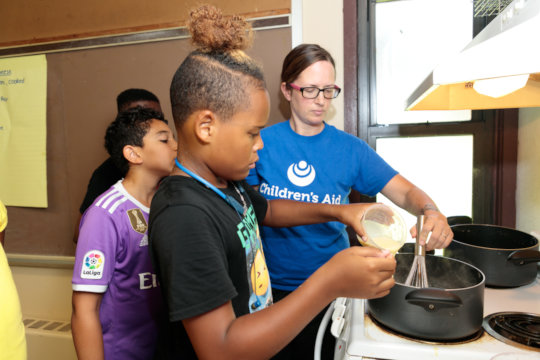 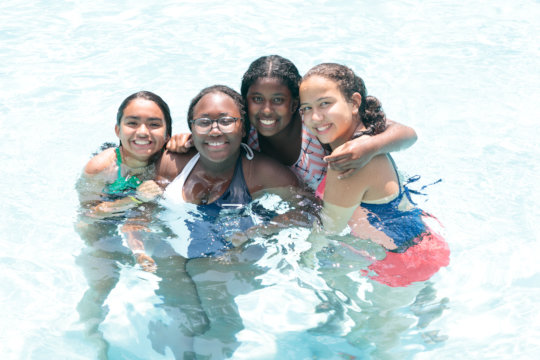