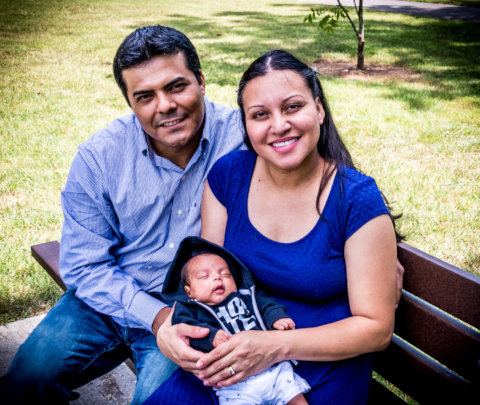 When refugees come to New York City, one of the most promising aspects of life here is the wide array of opportunities. But when COVID-19 swept the city, those opportunities were replaced by continuous hardship.

Mr. and Mrs. Soto* have three children, one of whom is a 1-year-old enrolled in our home-based early childhood program. The father was the sole provider, and was working in a restaurant to support his family. Due to COVID-19, he lost his job, and the family found themselves in a financial pinch.

Then, by late April 2020, the father contracted COVID-19. He thought the virus had subsided because he had a mild experience with the disease, but soon after, he woke up with swelling and a lot of pain in his legs. He had not been eligible for medical insurance, so he did not seek medical attention immediately. After some days with his condition worsening, he went to the hospital where he was admitted for several days. Thankfully, he was able to make a recovery and was eventually released.

Then, the medical bills came.

The family is Spanish speaking and needed help interpreting the bills and navigating the payment process, which Children’s Aid was able to provide. We also walked the family through the process of applying for financial hardship assistance from the hospital, and helped them discover that Mr. Soto was actually eligible for emergency Medicaid coverage.

With all of the extra expense and disruption, the family did not have enough money to afford food. The family received emergency food assistance from our pandemic relief efforts, and was able to get through this hard time knowing that they were not alone. They continue to receive educational services for their youngest through our early childhood program.

Thank you for supporting families just like these, reminding them that New York City is, and always will be, a place where opportunity is never out of reach.

*An alias name and picture are being used to protect the safety and security of our clients. 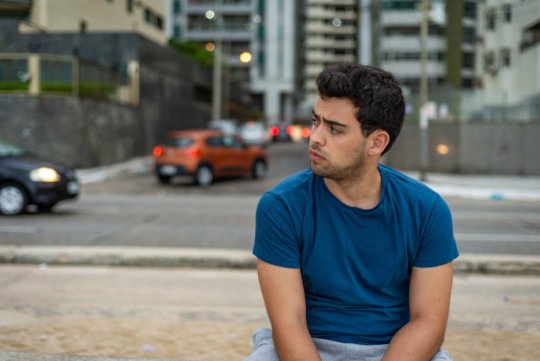 Hector*, 23, immigrated to the United States from Mexico, leaving behind his mother and father to join his siblings for a better life. When he arrived to New York City, he was immediately expected to seek full-time employment to help support his family.

But when Hector expressed a desire for a formal education, his siblings scoffed at him. He struggled with balancing the need to produce financially and wanting to pursue his American Dream. When he turned 16, his siblings grew weary of his obsession with school and kicked him out of their apartment. With nowhere to go, he ended up in foster care.

After he was placed with Children’s Aid, he continued to reach for achieving something bigger. He landed on becoming a math teacher, so he worked closely with our academic tutors and foster care social workers to help him prepare, apply, and eventually enroll in Guttman Community College. In the spring of 2019, he was so excited to graduate and earn his associate degree, and saw the graduation ceremony as an opportunity to reconnect with his siblings — so he invited them. At graduation, he walked across the stage, proud of his accomplishments, and looked out to the crowd for his siblings — but they weren’t there. Hector was really hurt, but resolved to keep striving for his goal. And his resolve paid off: he was accepted to City College of New York and began pursuing his bachelor’s degree in the fall of 2019, with all tuition, dorm, and mental health therapy costs covered by Children’s Aid and the Administration for Children’s Services’ Dorm Project.

The transition from community college to a full four-year college was not easy. City College was bigger and less tight-knit than Guttman, and the large class sizes and intense coursework proved challenging. But Children’s Aid provided him with targeted academic tutoring, and social-emotional supports to help him cope with the rejection from his siblings.

We also recently worked closely with Hector, who is undocumented, to help navigate the immigration system, and connected him to resources to pave a pathway to citizenship. Things were looking up.

Then March 2020 came. Just months away from finishing his junior year in college, he received the news: the dorms were closing because of a raging pandemic. His dorm was his only home — where would he go?

He turned to his Children’s Aid and Dorm Project contacts to quickly secure an emergency foster care placement. Without their help, Hector would have been homeless. After several months in a foster home, Hector was struggling with the loss of independence he had enjoyed at college. After COVID-19 case counts in New York City lowered, a dorm reopened, and we advocated for him to obtain a placement. After moving back in the dorm, he began thriving once again.

With his life back on track, Hector spends a lot of his time in his dorm room studying diligently to become a math teacher. He now has his eyes set on graduate school to get his master’s in teaching.

These services we provided to Hector, and so many youth just like him, were only possible because of your support. Thank you for giving Hector a lifeline and helping him get through this difficult year.

*An alias name and stock photo are being used to protect the security of our client.

After Hunger Relief, Nutrition Comes Next 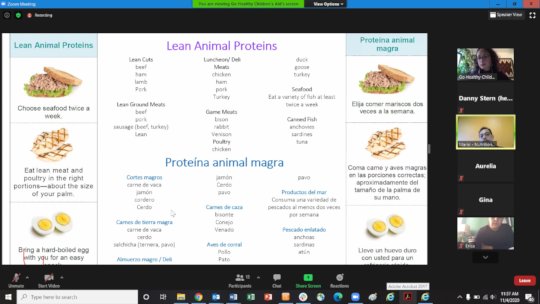 1.5 million New York City residents cannot afford food today — and many are children. In response to this crisis, you generously donated, and because you did, we have provided more than 75,000 food packages to thousands of hungry families. For so many kids, this has made the difference between skipping dinner, or having a nutritious meal to eat.

But it doesn’t stop at providing food packages. Shortly after the pandemic started, Children’s Aid staff member and professional chef Mario Landaverde, RDN, began hosting virtual nutrition and cooking lessons for our 3- through 8-year-olds. “At first, I was worried that they wouldn’t be engaged,” Mario said. “But I definitely underestimated what we could do virtually!”

For many kids, especially the ones cooped up indoors without much to do, it’s become the highlight of their week. They get to socialize with their friends and participate in interactive activities, like a food scavenger hunt. During the scavenger hunt, Mario invites his Children's Aid colleague Reina Perez to help out. Together, they challenge the youngsters to bring specific fruits from their fridge and show them off to their friends, or, they might ask them to find objects that have a similar shape to a carrot. After they find their fruits and veggies, they put on their chef hats and watch Mario prepare the food, and practice the cutting motions along with him using their imaginary "chef knives."

While the kids do have plenty of fun, Mario’s main goal is to use the lessons as an educational tool for the kids to become more familiar with healthy eating practices, and to teach some healthy cooking skills that they can then share with their parents.

“We are clearing up a lot of misconceptions, and helping families become savvy readers of nutrition labels. For example, we’ve had moms who believed children always need juice, until we informed them that it’s actually very sugary and not as healthy as water,” Mario shared. “For some of our immigrant families, they didn’t have the same vegetables in their native countries that we have in New York City, so we teach them how to integrate local produce into recipes.”

Staying healthy and eating well was important before the pandemic, but it’s become especially critical today. If a family member contracts the virus, they have better outcomes if they are eating right and staying healthy.

Mario recalls one special experience in particular he had recently. “I just had one student, Ian, who saw his mom drinking soda right after our lesson about healthy drinks. He asked her to consider a healthier alternative, and because of his special request, she replaced her soda with something better.”