By Antonio Maldonado - Secretary, Board of Directors 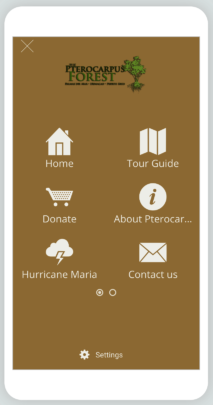 Since our last report, at the end of June, we completed the Spanish and English versions of an illustrated, 50-page draft script that introduces and describes this rare ecosystem that is the Pterocarpus Forest.  The draft consists of interpretative, educational material on a variety of themes organized around 25 “stops”. These stops start at the Forest entrance, continue along the ¾-mile elevated interior walkway and end at the Observation Tower and Visitors’ Gazebo.

The draft includes or suggests photographs, illustrations, videos and sounds appropriate to each stop or theme (which include topics like recycling in nature, the various methods of seed dispersal in the forest, and the impact of invasive species).  The script has been shared for review and editing with Dr. Teresa Lipsett-Ruiz, Dean of the School of Natural Sciences and Technology at the Turabo campus of the Ana G. Mendez University, and members of the faculty.  The School, its faculty and its undergraduate and graduate students have conducted research projects within the Forest over the past several years.  A meeting to discuss the script has been scheduled for September 11.

The script will eventually be stored, in its entirety, on our website for virtual visits. However, our main focus is on an edited version that will be narrated (available in iPhone and Android versions) while people are within the Forest.

On the technological side of the project, we moved beyond the preliminary design stage with the local tech firm engaged to create the local application, Virtualize.Net. We participated jointly in two, intense 1 ½ hour-long walking tours of the Forest with the Forest’s tour guide, during which we listened to his guided tour presentation, discussed major themes, and flora and fauna of interest, and began to take photographs and videos to guide us in the development of the app.  After our last meeting with Virtualize.net, at which we discussed the final draft script, the firm made changes in the application design, including the inclusion of a test audio component. We will be meeting soon to discuss these changes and to initiate the next steps in the technological parts of the process.

The project should be sufficiently advanced for a “dry run” by the end of October. Thank you for your faith in us. We look forward to your support in the future. 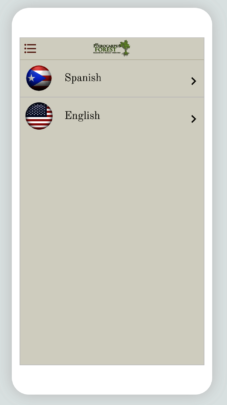 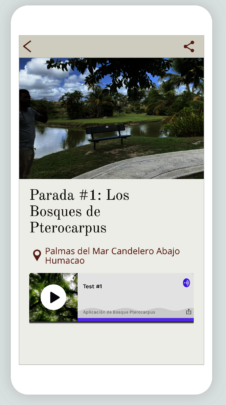 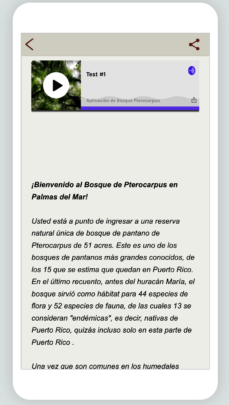 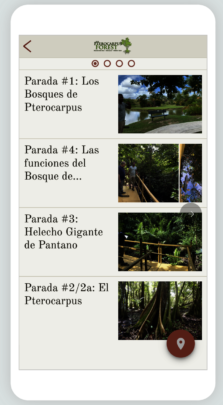 By Antonio Maldonado - Secretary, Friends of the Pterocarpus Forest

Since our last report, we’ve contracted a highly-regarded local tech company to develop the tour app and we are now in the design stage. Educational content is being developed separately, but in close collaboration with the app developer.

Thus far we’ve created the basic structure of the application, which contains a short dummy of the tour part, including some visuals and content. At this stage, we still envision that the application will contain general information about the Pterocarpus Forest, as well as audiovisual content specific to approximately 20 “stations” at the entrance to and within the Forest. The scripts for each of the “stations” are in development, with some additional research underway to insure  comprehensiveness, accuracy and timeliness. Once the scripts are finalized, they will be translated into Spanish. We’ve also created a list of professional voice artists from whom one or more will be selected to narrate the content, which will be available in both English and Spanish.

The selection of appropriate pictures, videos and illustrations for each station is also underway.

Scientists, environmental educators and copywriters with whom the Forest has worked in the past will review the app and the interpretative content as it is developed and give us feedback.

During this learning process, we’ve had to increase the project budget by nearly double, with most of that due to the costs of the professional narrator (possibly two, one for each language), and copywriting. Hopefully, we’ll be able to avoid expenses for visuals that will be part of the app content, by using excellent, high quality images that are in the public domain.

In conclusion, the development of the tour app has been a more complex, expensive and exciting undertaking than we initially estimated. It’s value, however, relative to the fulfillment of the Forest’s educational mission, is inestimable.

The Forest Reopens / Steady progress with the Forest Tour App

By Antonio Maldonado - Secretary, Board of Directors 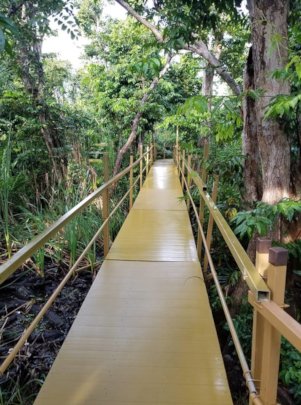 Reconstructed walkway through the swamp Forest

The Pterocarpus Forest and the Forest Tour App

The interior of the Pterocarpus Forest reopened to the public on February 26, after being closed in the aftermath of Hurricanes Irma and María.  Since then, hundreds of people have already strolled along the ¾-mile elevated walkway to see the Forest’s flora and fauna up close.  For those returning to the Forest, their walk offered an opportunity to see how the destructive hurricane winds took their toll on the Forest, downing hundreds of trees, among them mature Pterocarpus, and adversely transforming the ecosystem.  They could also see how the swamp forest has been recovering from the damage and restoring itself.

If you have not done so already, please visit the Forest for a still unforgettable experience with Nature.

As to our plans for the “Forest Tour App”, they have regrettably been delayed – but for reasons that we trust can only insure a better App and, ultimately, a better visitor experience.

After our GlobalGiving campaign ended, we began to identify and approach prospective app developers, as we developed ideas for audio and visual content.  Surprisingly, it was not as easy a quest as we thought.  When we finally identified experienced, apparently qualified developers told us that we needed to visit the Forest, take the guided tour, and speak with us about content based upon that experience.  Since that was not possible until the end of February, the process has been delayed.

We are currently awaiting the proposals.  As part of their bids, the developers will be including timetables for the development and availability of the app.  We will keep you posted. 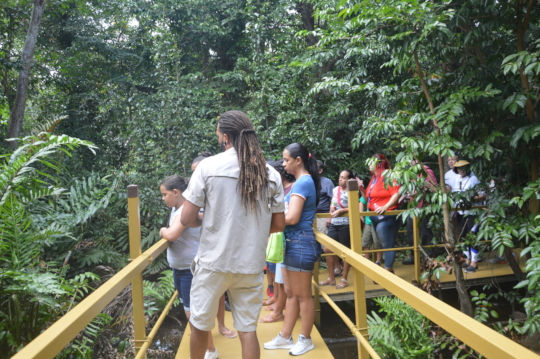