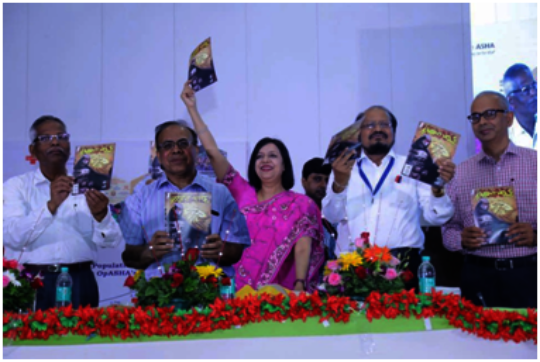 Knight Wolf is a superhero with superpowers, who fights evil doers with great panache and incredible bravery. He is also fighting Tuberculosis by giving health education and raising awareness about TB in a fun-filled manner- via a beautifully illustrated comic book.

Knight Wolf is the brainchild of Grant Reed, a 12 year-old schoolboy from the US, who, at this tender age, is the Creative Director for Operation ASHA.

We had a spectacular launch of the comic book in Mumbai, in a fully packed auditorium in St. George's Hospital. The Chief Guest, Dr. Sanjeev Kamble, Director of Health Services of Maharashtra, give an inspirational speech on Knight Wolf that was met with foot-stomping and thumping applause till the very rafters of the hall were ringing. The glittering ceremony was attended by government officials, State TB officers from other parts of the country, CEOs from corporates, and most importantly, our own TB patients who listened with rapt attention, and our very own TB health workers who serve patients with love and care and the utmost sincerity.

There was a widespread cheering and clapping when Dr Kamble said, "Knight Wolf is the new TB champion. He is telling children exciting stories of good conquering over evil, and at the same time, he is giving health education by graphics and pictures. Children like pictures, not lectures! A comic book is exactly what we need in the fight against TB."

We are grateful to Grant Reed for his brilliant creation and for investing his time, expertise, creativity and resources in bringing forward a solution for TB elimination. The comic book has already been translated into 3 languages, and more than 40,000 copies are being distributed to disadvantaged children in TB treatment centres, schools, hospitals, and other resource-limited settings.

1.  Operation ASHA recently won the Millennium Alliance Round 5 grant which will help us in reaching out to more TB patients and provide them treatment at their doorsteps.

2. Goldman Sachs declared Operation ASHA a winner of the Analyst Impact Fund Competition, 2018, for bringing tuberculosis treatment and health services to the underprivileged.

3. Our President, Dr. Shelly Batra is one of the 6 people selected across the world for an award by the Pierre Fabre Fondation for her work in social entrepreneurship.

5. Operation Asha collaborated with the NGO Every Infant Matters and Virat hospitals in Rewari, India to carry out health-related activities for children, such as awareness of proper hand washing techniques, vitamin A distribution, and deworming.

Manju, a 40 year old working women, lives in the slums of Bhud in the Baddia area, with her husband and 4 children. She used to work as a help at some local restaurant. Her husband used to work as a chauffeur somewhere. Although, both earned a meagre salary every month, but were managing to get food on table for the family. The situation worsened when 3 months ago, Manju’s husband was thrown out of his job due to a dispute, followed by a fight with his owner. However, Manju was still continuing her job but her deteriorating health had forced her to think how she will continue with her work.

It was sunny day when our CHW was on round in Bhud and was moving in Slums finding out people with TB symptoms. There she came across the kids of Manju who were playing outside. As she briefed them about the symptoms, one of the kid said that my mother has such symptoms. Our CHW went to the house of Manju along with the children and saw her situation herself. She spoke to Manju about the symptoms and was quite sure that Manju is suffering with TB.

The sputum sample of Manju was sent to lab for getting tested and she was diagnosed with pulmonary TB. Sunita, our CHW, immediately started Manju’s treatment and at the same time, got her family members tested as well to ensure all were safe. She counselled Manju and her family together and told them about the precautions and measures to be taken by the family so that the disease doesn’t spread.

Manju has completed her one month treatment and there is tremendous improvement in her health. She has even joined back her work and is the sole bread-winner for the family now. Sunita frequently visits Manju to take updates on her health and in the mean-time Manju updated Sunita about the health of a boy living in her neighbourhood. The boy also has symptom of TB.

With Manju’s help, the boy has also been tested for TB and has been diagnosed as well. The boy is also taking treatment now. Manju’s words and her experience with the disease in the past, along with the counselling done by our CHW, is helping the boy to be positive towards his health condition.

This quarter, Operation ASHA raised $177. These donations will be used to provide medicines, grocery, and other necessary day to day items to  the disadvantaged TB patients in India Cambodia.

Operation ASHA is thankful to its supporters for joining hands in TB eradication. We look forward to your continued support. 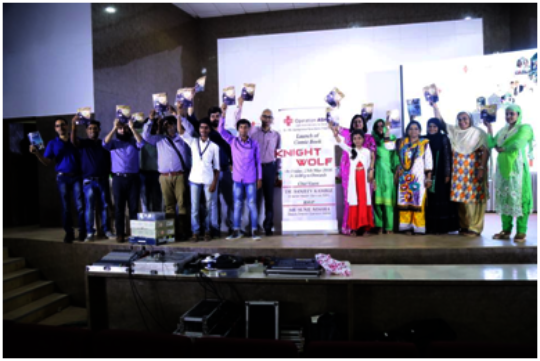 There is lots of exciting news! The Honourable Health Minister of India, Mr JP Nadda, and the Honourable Chief Minister of Himachal Pradesh inaugurated our project and eCompliance last week, in an inspiring and spell binding ceremony held in Kullu. Kullu is located in a breathtakingly beautiful valley in the Himalayas, surrounded by majestic mountains and ever-flowing rivers.

But mountains are not about beauty alone. TB patients here live miles away from civilization in tiny hamlets scattered on the mountain sides. The Health Minister Mr JP Nadda pointed out to the Chief Minister of the State that eight of the thirty worst effected TB districts in India are in Himachal Pradesh alone. Our work is challenging, as finding these patients is a gigantic task. We have health workers on motor cycles who drive as far as it is possible on difficult, narrow, ill-kept roads, and then scramble on foot up the mountains to serve TB patients in their homes. We are serving a population of 1 million such people and hope to detect and treat atleast 3,000 patients a year. This takes the total population served by Operation ASHA, for TB, to 5 million in India, and over 10 million worldwide.

In the inauguration ceremony, Mr Nadda and the Honourable Chief Minister took fingerprints of the first patient found by Operation ASHA in Himachal and initiated him on TB treatment. In his resounding speech, Mr. Nadda spoke enthusiastically about eCompliance and stated that his target is to expand eCompliance further in the State. We are privileged and humbled by their support.

Also, the London School of Hygiene and Tropical Medicine, UK, invited Dr Shelly Batra to write a blog on the occasions of on World TB Day. Please click here to access her blog.

This quarter Operation ASHA raised $ 179.55 which will be used to provide food and other necessary day to day items for the poorest patients in India and Cambodia.

Operation ASHA has reached this level and is taking steps toward a TB free world because of you. Please extend your support one more time. Please go to Donate Now to make a tax deductible donation to save the lives of disadvantaged patients.

You will be delighted to know that eminent Professor and TB expert, Marc Lipman, has carried out extensive research to analyze OpASHA’s results and use of eCompliance to ensure full treatment. His research paper for Public Health Action states that OpASHA achieved an exceptionally high Treatment Success Rate, “despite the fact that OpASHA works with highly vulnerable patients” who are far more difficult to treat than usual. Lipman goes on to say, ‘the age and sex distribution of TB patients treated by OpASHA may reflect its aim to "reach patients who otherwise may never receive care."

Also, experts from the World Bank have prepared a case study on Operation ASHA, which states “OpASHA offers a low-cost, highly leveraged operating model which enjoys high community and partner engagement.” This also states that MDR-TB patients incur huge out-of-pocket expenses ($2500/1,00,000 Lakh Rupees) which they can hardly afford. By turning the tap off MDR-TB, Operation ASHA is saving lives, giving health, and lifting patients out of poverty

There is an urgency about our work, as you, our supporters and donors will understand very well. Of the 10.9 million people who fall sick of TB each year, 4 million go missing. An immediate need is to scale operations to identify and treat these missing patients, who are often marginalized and live in hard to reach areas.

This quarter Operation ASHA raised $1,147.60 which will be used to provide food and other necessary day to day items for the poorest patients in India and Cambodia.
We have been able to support these disadvantaged TB patients only because of your continued love and support. Make a donation today and help us go further in achieving our mission of eradicating tuberculosis.

Thank you.
‹ 1 2 3 4 5 6 7 8 9 ... 12 ›
WARNING: Javascript is currently disabled or is not available in your browser. GlobalGiving makes extensive use of Javascript and will not function properly with Javascript disabled. Please enable Javascript and refresh this page.