Refugees in for long haul: trees ever more key 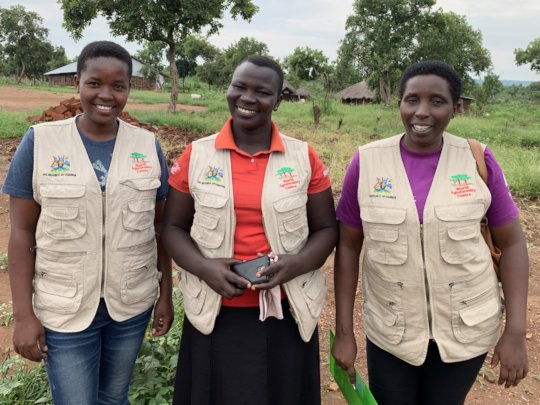 Spirits are high in our agroforestry center in NW Uganda, despite the topsy turvy weather (heavy rains when it should be getting dry) and the arrival of new refugees, which indicates that fighting is still continuing in South Sudan.

One major cause of the high spirits is the motorcycle trailer that we unexpectedly bought with your donations. There's nothing flashy about it. But to us in the refugee setting, it looks like a Rolls Royce. We can now move around seedlings without pouring out funds on renting a pickup. It chugs along rather slowly. But it is solid and invaluable and has given us wings. Thank you very much.

Another source of joy is our much-improved gender balance. Whereas before the team had been all males, we now have three highly competent women, who I want to stress actually live in the refugee area. No going back to the town at night for them. From left to right in the photo: 1. Flavia, one of our three community-based facilitators (CBFs); she studied community development; 2. Gertrude, one of two supervisors, who follow up the CBFs; she has a diploma in forestry; and 3. Florence, who runs the entire project; she has a degree in animal husbandry and has worked for some good years with us on the fodder shrub Calliandra. Added to the feed of cows, the protein-rich leaves of this plant can raise daily milk production from about 3-5 liters to 15. And it improves the quality of manure, raising crop yields by improving the soil. It's agroforestry - the interaction of a woody shrub, with an animal, with annual plants: win-win-win-win-win.

When I reached the refugee zone last month, I sensed that the zeal to protect that environment has somewhat dimmed. Formerly, the UN and district had devoted themselves to marking trees that should never be cut with red paint and those that should be cut with caution and probably not at all with yellow paint. Two years into the emergency, the paint is so faded in most cases that it is barely visible and no deterrent at all to cutting. So we seized the situation by the scruff of its neck, took out two tins of pain we had invested in with your funds, and started marking key trees in and around the center.

Marking the trees was messy and fun but it was also entirely serious. Thank you for making the marking possible!

Note that it is rarely the very poor who fell important trees. It is very often people from outside the area who know that it is only lightly policed and regulated who take advantage of the situation.

We are currently distributing grafted mangoes to host community farmers to make orchards of 30 trees each. In the fourth photo, you can see Gertrude listening to a farmer, describing how he hopes to protect the young trees against free-roaming livestock that are likely to predate them. He is proposing making a small barricade of thorny Acacia branches. Goats, in particular, are a menace to young trees.

We had a visioning session where we talked about our aspirations for the center. The team wants a small vegetable garden and an agroforestry demonstration plot with pigeon peas, 200 kg of which were swiftly sent to us from another area of Uganda. The staff also wants to demonstrate the making of liquid manure and pest control concoctions made from plants to anyone who visits.

We immediately set to implementing these easy to implement ideas. We purchased seed for indigenous African vegetables from the market and as well as the seed for Moringa, a tree with edible leaves. We were touched in town to notice young people selling vegetable seedling plantlets wrapped in banana fiber and bought some too. No plastic! You can see them in the last photo.

With a goal of planting 120,000 seedlings, we are well on the way. Thank you for all your support! 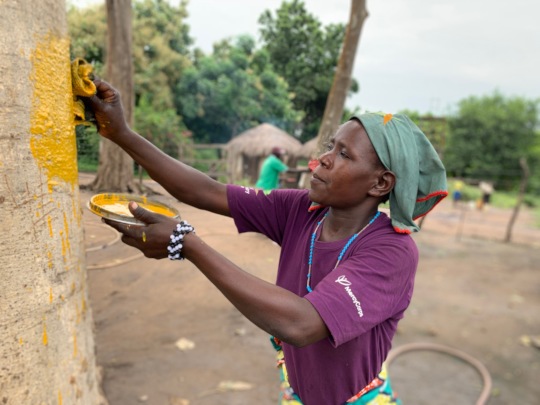 Marking a tree yellow to protect from cutting 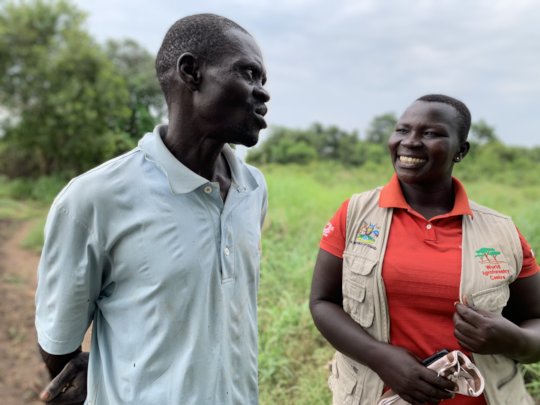 Gertrude listens to a farmer 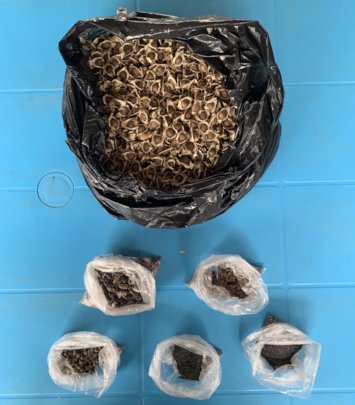 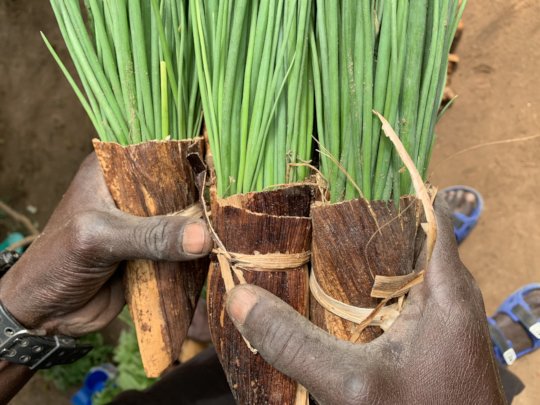 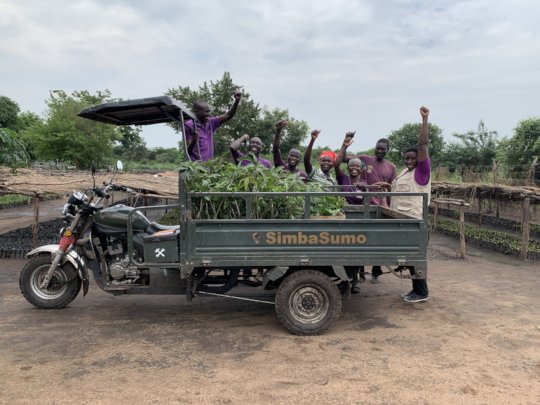 The dry season came to an end: planting began 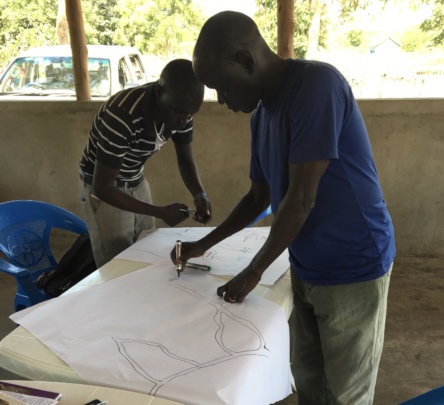 Uganda has two rainy seasons a year, the most important one of which should have started in March and be ending about now.  But according to the Famine Early Warning Systems Network, the rain this year has been below normal with serious implications for the refugees and host communities in West Nile, NW Uganda, that this project is working with.

Due to the resultant "reduced growing period, the first season production of cereals and legumes is most likely to be at least 50 percent below average," says FEWS. We certainly noticed this.

This bad situation is a symptom of the on going climate breakdown which hits natural resource-dependent populations the hardest. But the communities we are working with are resilient and, whenever rain seemed enough in the past three months, they planted seedlings.

We are learning what is best regenerated from stumps in fields versus those types of trees that are best raised in the nursery. We are also listening to the preferences of the refugees and host communities while being cognizant that we need to focus on rapidly disappearing species of important ecological significance.

We were happy to enter into an agreement with the UN Food and Agricultural Organization (FAO) to work on value chains that can bring revenue to the refugee and host communities. We have chosen honey, shea butter (which is both edible and used on the skin) and possibly the products of the Balinites aegyptiaca tree. This tree is found in a band across Africa from Somalia to Senegal, and its fruit is high in Vitamin C and other micronutrients. Its leaves are also a prized dry season vegetable by many ethnic groups, and the kernel of the fruit has a valuable oil.

Working with communities, we have installed many traditional bamboo beehives in trees as well as set up more "modern" wooden hives. Honey is a nature-friendly commodity which finds a ready market.

We are also happy to report that we have been able to buy means to transport the seedlings - this is a wagon pulled by a motorbike. Since we don't have a project vehicle, this sturdy vehicle means we can get around the rugged terrain without having to look for funds to rent a pickup. It sounds a small thing but having the means to be mobile is huge!

At the World Congress on Agroforestry 2019, which is held every five years, this May in Montpellier, France, our poster about this refugee project won a prize. We are deeply grateful to all of you who have donated and made it possible for us to get through the long dry season and into the rewarding time of planting. We have also been busy monitoring the survival and growth rates of the 2018 trees.

We are a little sad to report -- though in a way we are not surprised -- that many of the trees that we planted along the riverbanks and told you about in the last report did not make it. They were browsed by goats or caught in bush fires. Both of these are major threats to forest and tree restoration projects all over the world, especially where livestock is free roaming and setting fire to land to get fresh grass is a custom. We need to work more with communities so that they draw up their own regulations to safeguard the trees they want so badly.

Finally, we are happy to report that we will be working with the NGO Mercy Corps for the next nine months or so to turn our learning center into an innovation hub where the community can get involved in various training and enterprises. This will be an intensification of what we are already doing. I personally hope to see soap making from tree seeds. Thanks again for your huge support. 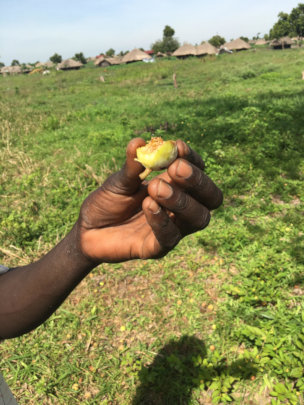 A refugee holds up an edible wild fig 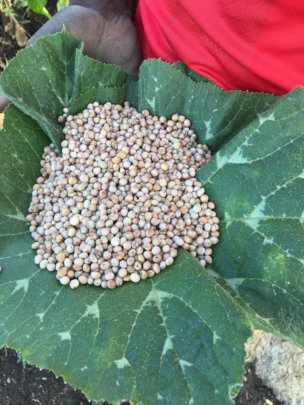 A refugee carries pigeon peas in a pumpkin leaf 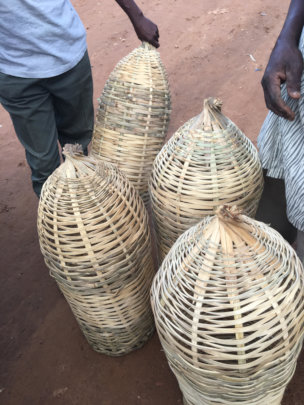 Traditional beehives to be used by the refugees

Agroforestry with refugees in NW Uganda - an update 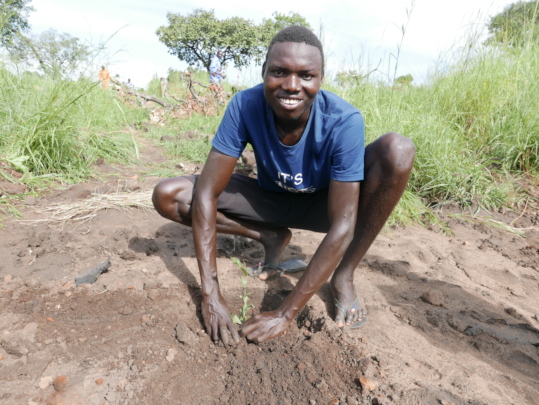 It's been dry in NW Uganda since our last update but work continues. Any seedling planted in the last five months would not have survived the aridity and high temperatures. But there is still a lot to do.

In January we sent a young man, Dan, to the national forestry college. He had worked assidously in the nursery.

We have been conducting tree seed collection for the next season, with communities collecting seed for which they were, of course, paid.

We trained groups on bee keeping. By hanging hives in trees, we protect the trees and give families and groups a new income from honey. We bought both modern and traditional hives. The traditional hives were from the Democratic Respublic of Congo, which is not far from the refugees settlements. Made of bamboo, these cost just $1.20. When sealed with cow manure (which hardens into a plaster-like substance), they provide an excellent and natural home for bees.

We started seeding the nursery and now have many thousands of seedling in preparation for the rains which we expect in March. We will raise 17 different species. These will include exotic but naturalised fruit trees, like papaya and jack fruit for planting around homesteads. But it will also include indigenous fruit trees, like shea and desert date (Balinites).

We are encouraged by the attention the project has received among donors and partners and have presented on it in the UKAID (DFID) and also at the UN Food and Agricultural Organisation in Rome and in Geneva at a gathering of humanitarians who work in crises. This attention matters to us because we would like to shift humanitarian thinking to include work with trees and to recognise the environment more.

Please see this our blog attached. It explains our philosophy - plant but don't just plant; protect standing trees; and conduct natural assisted regeneration. Focus on diversity - it gives resilience, dietary diversity and more (for linked science papers explain this) - including the fact that children who live close to forests (less than 3 km) have better diets that those that live further away, and forests with diverse species tolerate droughts better than less diverse ones.

We were also quoted in The Guardian in this piece.

We do not agree that the refugees are causing massive deforestation. We think they are removing trees from the landscape to meet their needs. But we are happy that the UN refugee agency is recognizing the importance of trees.

We are extremely grateful for your donations. While we are in discussions with donors and have good leads, what you donate gives us flexibility and we are extremely happy to be in touch with you.

Please let me know if you would like me to come and speak to a group - it may be possible to arrange - or write to someone else about this. We want to change paradigms while doing brilliant work on the ground that gives hope, protects biodiversity and supports refugees and host nationals with fruit, fuel, shade, better soil and more.

Very best and thank you again. 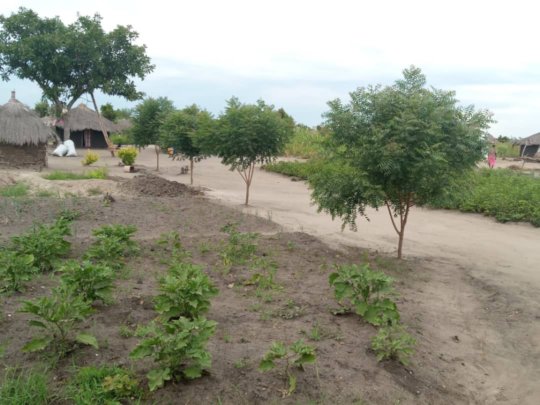 'Our' trees lead up to a family homestead 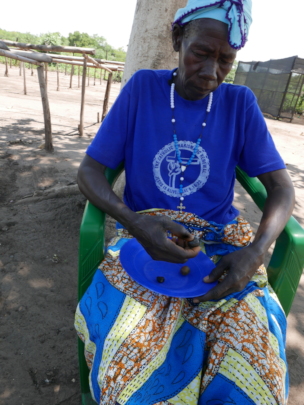