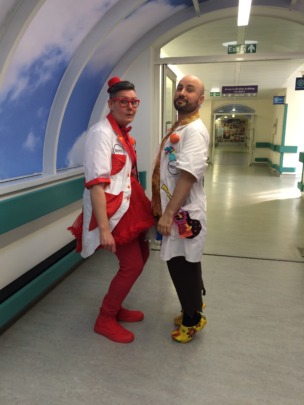 Feedback from parents and children is extremely important to us. We want to provide a programme that benefits as many children as possible, improving their hospital experience and reducing levels of anxiety.

In January we joined the Giggle Doctors at Great Ormond Street Hospital for an impact measurement focus day. Dr Easy Peasy, Dr Bananas and their funny friends visit this hospital every Tuesday and bring smiles to around 2,500 children and their families each year.

“Very entertaining and valued visit during the waiting period”

“A great service that put a smile on my child’s face. Very engaging and positive. Thank you!”

“Very relaxed and made Max laugh and smile”

We will continue to measure the impact of the Giggle Doctors at the hospitals, hospices and specialist care centres we work with throughout the year.

This year we are also increasing visits to Young Epilepsy, Royal United Hospital in Bath and Leeds General Infirmary. That means lots more smiles for children who need them the most!

Thank you for helping us to bring magical moments to so many children during challenging times. 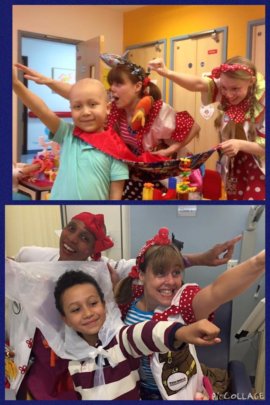 Harrison with the Giggle Doctors

The Giggle Doctors bring fun and laughter to so many children and their families during what can be a difficult time. Thank you so much for your support.

“Harrison first met the Giggle Doctors at the Royal Marsden Hospital in Sutton when he was diagnosed with Acute Lymphoblastic Leukaemia in October 2013. In those first two weeks we were inpatients, trying to understand the oncology treatment and feeling bewildered…when two Giggle Doctors walked into the room. We could see Harrison cautiously watching what was happening with them and the other patients. When they joined us it was lovely to see his smile again and the happy interaction the Giggle Doctors had with him. Over the 2 years since, Harrison has bumped into the Giggle Doctors many times.

I love the fact that he starts to smile when he sees them. He's not the most outspoken child but you can see he always enjoys the time he has with them. As parents, it’s wonderful to see such fun and laughter during difficult times.

My favourite moment was when Harrison had been given a Superhero H cape but hadn't worn it. I would hang it on his drip hoping he would get accustomed to it. Then the two Giggle Doctors came in, started playing with him in the play room and gradually started playing with the cape. They asked if they could put it on him and he agreed! Then the silly posing and photos started! That moment will stay with me forever. Two years on and we asked them to re-create the "cape moment" and in their funny style the Giggle Doctors made a cape from a plastic apron!  What great memories. We have 16 months of chemo to go and I can see an annual cape photo being needed!

You guys do a great job - child first, patient second. 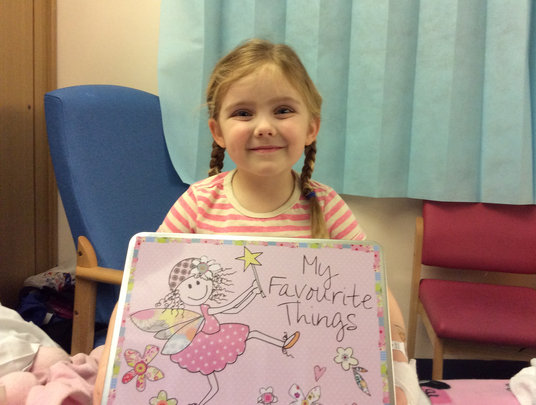 We regularly receive letters of thanks from parents of children who have been visited by Theodora Giggle Doctors.

Juliet W. recently got in touch to tell us about how the Giggle Doctors helped her daughter Gemma.

Why was Gemma first admitted to hospital and how did she feel?

Gemma was first admitted to hospital due to a mass in her abdominal area. She was in a lot of pain and very anxious and frightened.

When did Gemma first meet the Giggle Doctors?

Gemma met the Giggle Doctors two days after her operation, where a large incision had been made across her lower tummy.  She was attempting to get out of bed for the second time, a process which had been extremely stressful and traumatic the first time she had tried, due to the pain. Gemma was perched on the edge of the bed in a sitting position when the Giggle Doctors came into her ward. Until this point there had been lots of tears and Gemma had become a very quiet, sad and scared little girl. The Giggle Doctors started to engage with Gemma. They gave her a wand to make them disappear and then they hid behind the dividing curtains with their toes sticking out! For the first time in over a month our little girl giggled…and although you could see from her face that it wasn't very comfortable to giggle - she carried on giggling! For me it was a very magical moment!!  After their visit Gemma got her fighting spirit and determination back; it had, up until that point, been completely lost.

How did the visits change Gemma’s experience of hospital?

The visits changed Gemma's hospital experience immensely! Now when Gemma talks about hospital she doesn't focus on the scary parts like the scans, operations and procedures, she always talks about the Giggle Doctors and how they made her giggle. Gemma still has the wand and loves to show people how she made them disappear (“but they were really behind the curtain” she says and giggles)!!!

Thank you so much for helping to bring fun and laughter to so many children like Gemma. We’re so grateful for your support.